Our final week in Arizona was spent in Tucson and then traveling to the border to hike and learn with Tohono O'odham tribal members. Classes focused on the history of immigration policy in the US, soil health in the desert, and the tribe's ongoing relationship with the political boundary between the US and Mexico. Enjoy this window into Mountain Classroom!

Familiar faces in different places. Drew Donaldson, the Dean of Students, and Matt Mackenzie, a mathematics teacher, flew out from frosty New Hampshire to Tucson, Arizona for Fun Officers Weekend. For three days, our instructors, Coco and Timbah, left the Mountain Classroom community to catch up on work and have personal time. 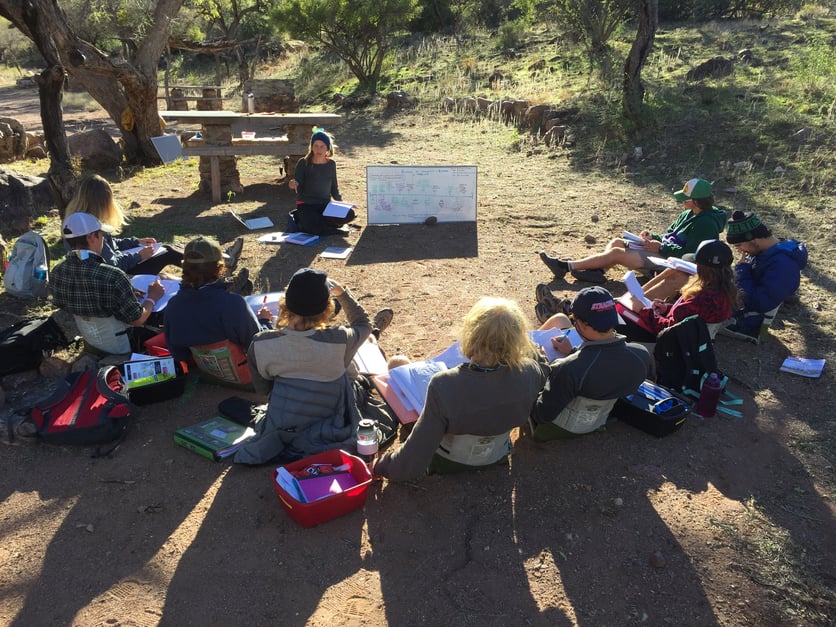 On our first day, we traveled to the John F. Kennedy Library for a study hall for academics and mountain books, our final projects for the term. Being practically separated from the outside world, besides mail drops and phone calls home, we all darted to the magazine section to catch up on what’s been happening around us. From learning that our beloved Patriots made it to the Super Bowl, to politics, and sport scores, everyone had a smile on their face.

After a productive study hall, we treated ourselves to authentic Southwestern cuisine at a local eatery. There was a patch of miscommunication which resulted in our lunches being left at our campsite, so our stomachs were howling like desert coyotes. Everyone's eyes lit up as our waiter brought out our meals. Stomachs were filled to the brim and everyone was content. 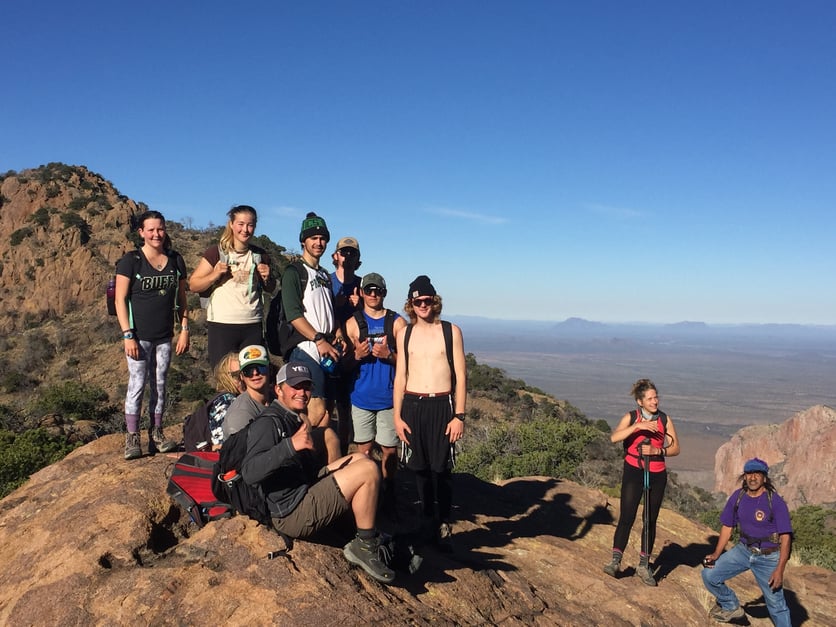 Saturday, our second day with Matt and Drew, was our backcountry day. We hiked Brown Mountain, which cast a great shadow over our campsite in the Gilbert Ray Campground. The trail was filled with cacti of many different ages and sizes, desert shrubs, and of course, loose red, brown, orange, and yellow rocks. The summit had a spectacular view so high up that we shared the same elevation as helicopters. saguaros coated the neighboring peaks in a spectacular fashion that emulated the mighty maples and oaks of the Northeast.

The hike down offered a view of the life span of the saguaros. Some were small and had no arms, others were grand and had many limbs. I imagined what pieces of history these cacti have witnessed, and was struck by the possibilities. We passed a few decaying saguaros, which had a similar composure to bamboo.

Sunday, our final day with the fun officers, was spent with free time on Tucson’s 4th Avenue. The street was home to a variety of shops. Many were thrift shops, small cafés, and vintage shops. Everyone brought home treasures that ranged from fanny packs to hacky sacks. Tucson has a wonderful blend of cultures, and I hope later in life I find myself walking 4th Avenue again. 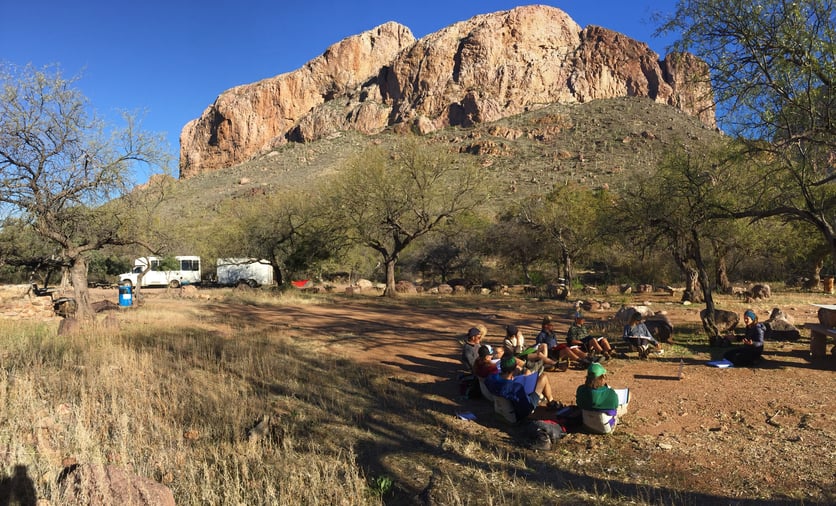 Life in the shadow of Baboquivari Mountain, deep in the Tohono O’odham Nation was sweet. If you haven’t seen pictures of our campsite, imagine a New England paradise buried somewhere in the middle of the desert, miles from paved roads. A mountain stream meandered through our pine tree filled site. Being able to hang a hammock from an unthreatening plant was surreal. And If the shade provided by the trees that supported Matt, Scott, and me in hammock city wasn't enough, the towering rock formations just a minutes walk from us were. They would hide the morning sun from sight until a spectacular 9:00 am show. And when the sun disappeared behind the horizon on the other side of the desert, the rocks mirrored the sunset in a stunning red glow. 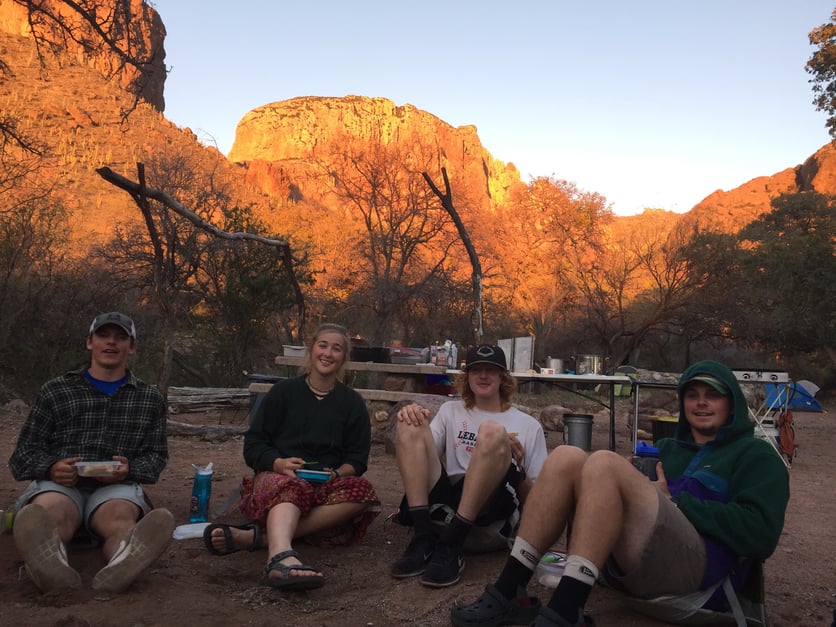 Obviously, we could not have asked for a better setting to learn about Native American reservations. On Tuesday, James was our guide on a hike up Baboquivari. He is a quiet man who has lived a number of places and finds himself living happily back where he started. He picks his words carefully and the stories he did tell were powerful. One story told of a young man who decided to tirelessly search the mountains for an undocumented cave he saw in a dream, which shows the spiritual power the area holds. Other stories about immigrants crossing the border through the mountains from Mexico reveals its political relevancy. And the somber tone he took when discussing the possibility of a wall being erected through his land—his people’s land—gave everyone in our group valuable insight into their situation. 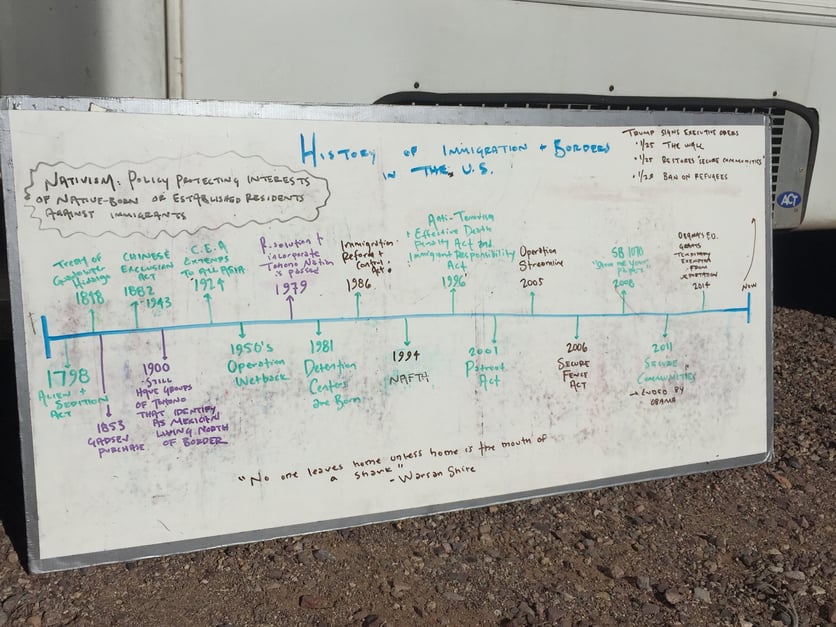 Yesterday we returned to the mountains with James. This time we visited I’itoi Ki, a cave holding not only hundreds of years worth of donations and sacrifices, but a rich spiritual significance to members of Tohono O’odham Tribe. Bernard, another member of the tribe, joined us for a delicious nacho dinner. He continued the trend of being a gifted storyteller. In the 45 minutes that he held our attention, he told a story about a flood, and the role the cave played in ending it. He spoke of his less-than-simple interactions with border patrol. In an aside, he talked about an ingenious “Normandy Fence” that was designed to stop the vehicles of drug smugglers. In response, the smugglers designed an even more ingenious ramp system to drive their trucks over the fence and proceed on their way to profit. “If someone builds a ten foot wall,” he said, smiling an unfortunate smile, “someone else will bring a twelve foot ladder.” With this single statement, he made a case for what an utter waste of money the construction of a primitive wall would be.

Driving away from our temporary home made it feel like nothing short of a home. We no doubt bonded with the place and people who inhabit it. Our real home is pretty much as far from these types of places as possible in the United States. What we learned there is as unique as it is important. And what we saw there is as beautiful as it is important to conserve.