Proctor Academy's Mountain Classroom program, an intrepid group of ten students and two faculty members, spent a week paddling the mighty Mississippi, fighting unseasonably cold temperatures and becoming closer as a group. With a week left until winter break, Sam '19 reflects on the past week together on the water in the text below. Be sure to also check out more photos on Flickr! 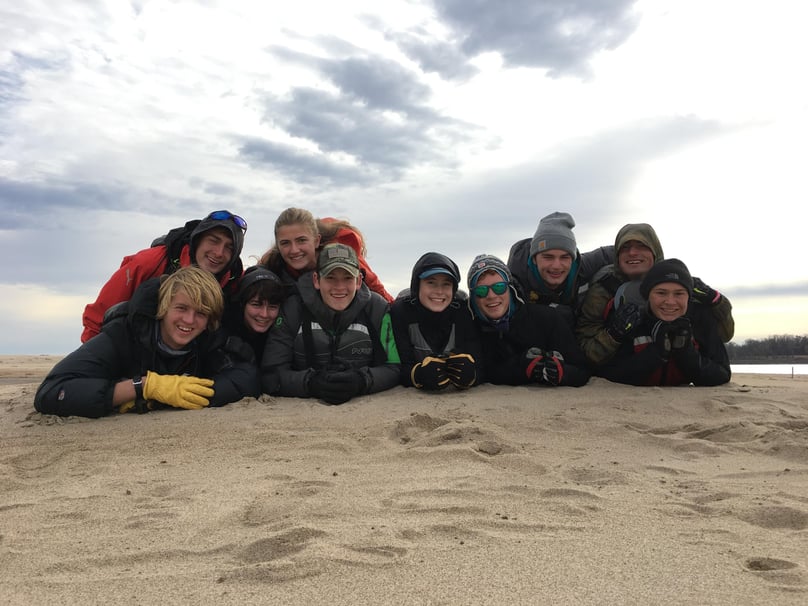 I think I speak for the entire group when I say none of us knew exactly what to expect; this was a part of the world none of us had ever been to. Every time we turned a corner in Mississippi, what we knew was reinvented. We all grew to greatly appreciate the area we were in, and will not soon forget it on our journeys.

Our group of 12 has forever changed from our seven-day adventure. Without the distraction of modern day technology or civilization, we found excitement in the simple and the natural. We began our journey on December 2nd, putting in our three canoes – Grasshopper, Cricket, and King Fisher – by Helena, Arkansas. Passengers of the nearby steamship The American Queen wished us luck as we paddled out to our first island, West Montezuma. 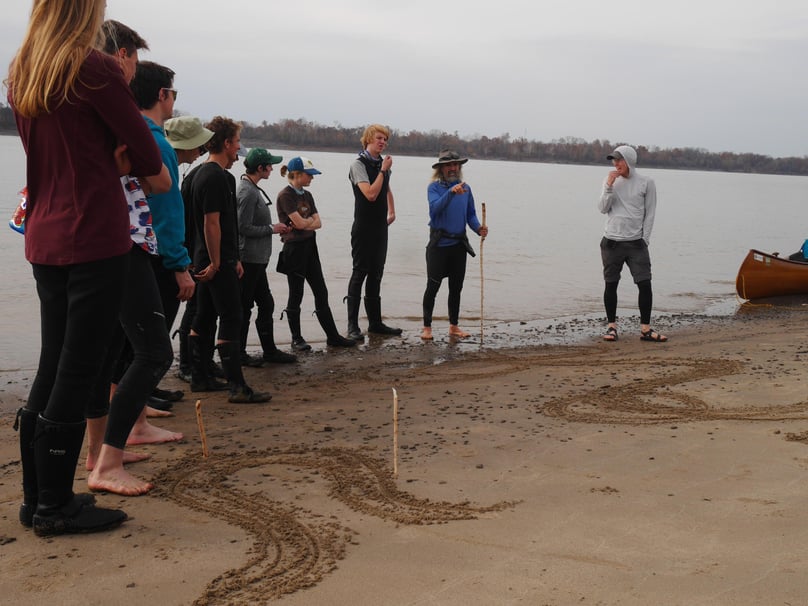 One of our guides, John Ruskey (the same man who introduced me to the aforementioned quote and is comparable to a real life Ron Swanson), explained to us that the four-mile long island was created after a steamship with the same name sank, and currents slowly piled sand up on top of it. In addition to learning the incredible backstory, we were treated to an awe-inspiring sunset through sand dunes and willow forests.

After an early wake-up on day two, we paddled another dozen miles to another island to set up a storm camp. We set up our tents and started a fire, and our cooks began making spaghetti for dinner, when our propane “unexpectedly” (quote from Kate Sabo) ran out. Meatballs became meat sauce, and the pasta continued to boil over the fire. Following the stressful cooking experience, the talents of Olivia Clark and a travel guitar lifted spirits. A positive attitude was rewarded the next morning, with a well-deserved sleep in and a day of rest. 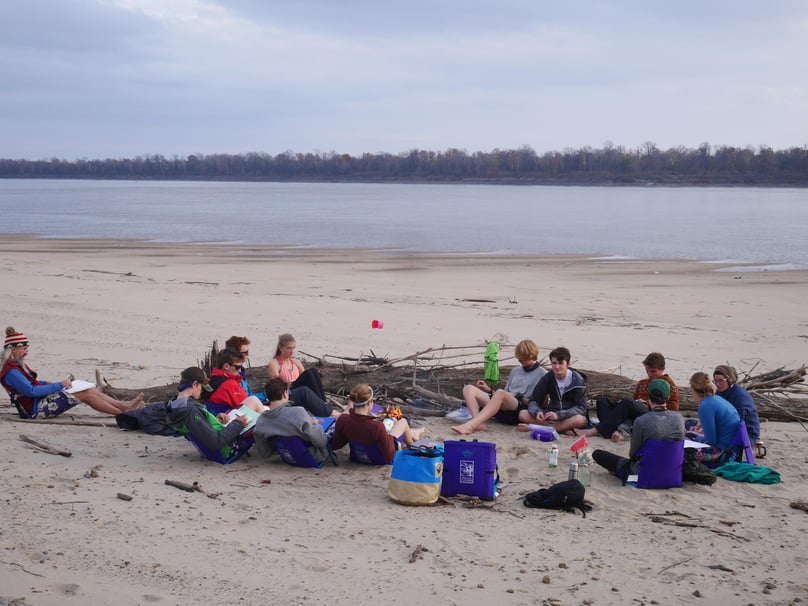 Due to the passing storm, we didn’t canoe any further on the third day. To pass the time, we played soccer, and Alex taught some of us an “Appalachian boot dance.” That night, many of us took to whittling around the fire, attempting (and some of us succeeding) to create a spoon from a piece of driftwood. 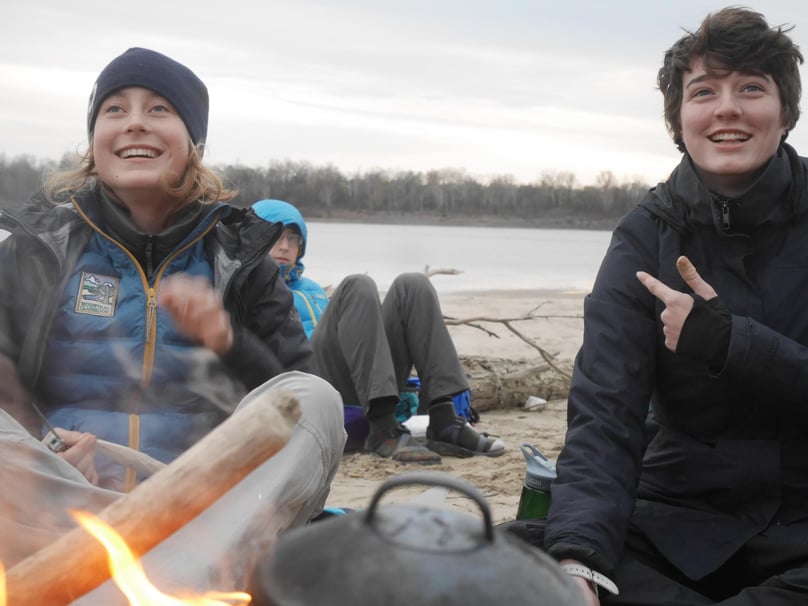 On our fourth day, we added a few people to our group. This included Mark “River,” and ex-NFL star and active river rat. They graciously captained us, hopping from island to island, and campsite to campsite. 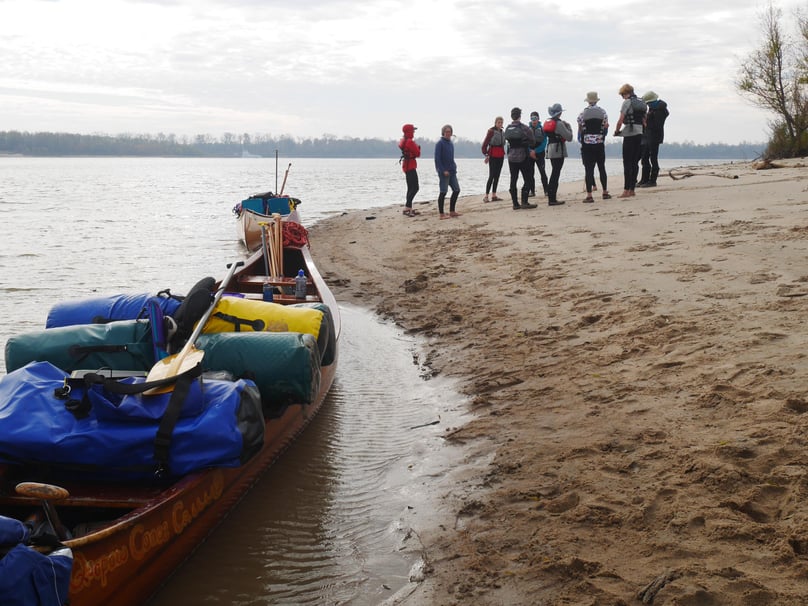 The people we met on the river this week are some of the most interesting folk I have ever interacted with. John is an expert on the Mississippi, and is glad to share stories of his decades on the water and journey from a Colorado mountain boy to a canoe builder and guide. Timmy is a college kid, studying religion and already knows he wants to make his career on the water. Lena has been with the Quapaw canoers for about six years, and let us interview her about her past experiences living in Germany, and how she came to Mississippi. Then there’s Mark, who was glad to tell us about how even after playing football professionally, the waters of this superhighway drew him back. Finally, there was Brother E, the fearless and extraordinarily talented driver of the canoe trailer, as well as a lover of jazz and excellent dancer. All of our guides were kind and wonderful to share this experience with. As a group, the students of 2017-18 Winter Mountain Classroom are extremely thankful for their time and company.

Other than the amazing people, the highlight of the trip, for me, at least, was on the morning of Day 7. In a rush of courage, we decided it wasn’t right to canoe through – but not swim in -- the great Mississippi. With a cold countdown, we dived in holding hands. The water was cold, the air was cold, we were freezing. It was totally worth it. After a week of no showers, there was more than one reason we had to take a dip. We dried by the fire, and canoed our last few miles to be picked up by Brother E. Now, we will make our way down to New Orleans and get ready to fly home.