Proctor's Mountain Classroom program continues its exploration of the American Southwest through place based learning, expeditions, and community living. Read more from Meg '22 in this week's blog!

After an exciting couple of days in Zion National park we packed up our worn-in tent, loaded the fire wood into the trailer, and packed up our kitchen to head back to Kanab and the warmth of our wild western cabin. Starting off the day in the cabin, our wonderful instructors cooked us breakfast as we enjoyed a luxurious sleep in until 9:00. Quinn and Erica laid out an extravagant spread of toppings for our huevos rancheros breakfast. With bellies full and smiles wide, Brynne and I led the group on a hike to an emerald pool surrounded with some very questionable petroglyphs, sparking great laughter from our group. The day ended with some secret toad (a fun controversial game our group plays religiously) and some studying for Quinn’s class. 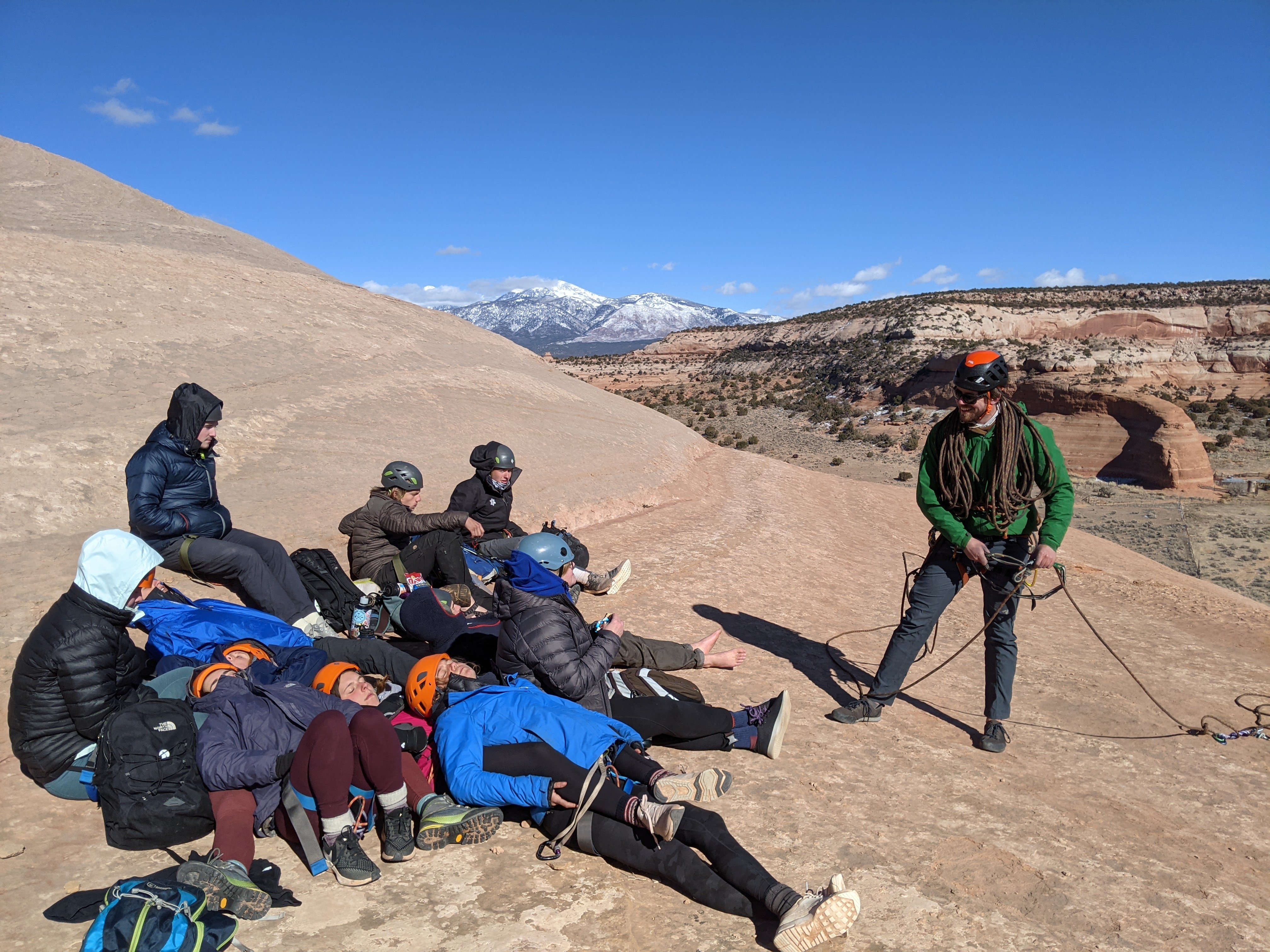 The next day we woke up with an early start dreary eyed but exited to venture into the great canyons of Bryce National Park. The bus ride filled with laughter and singing to some angelic music was a good energy booster for our long hike ahead of us. With the snow piling higher and higher as the bus ride progressed, a lot of us New Englanders felt at home. The minute we pulled into the parking lot of our destination, jaws were dropped. I can’t even express how insane the scenery was. I felt like I had stepped into Dr. Seuss book “Oh the places you’ll go” the hoodoos (the name of the rock formation in the canyon) towered over our heads as we trekked along. 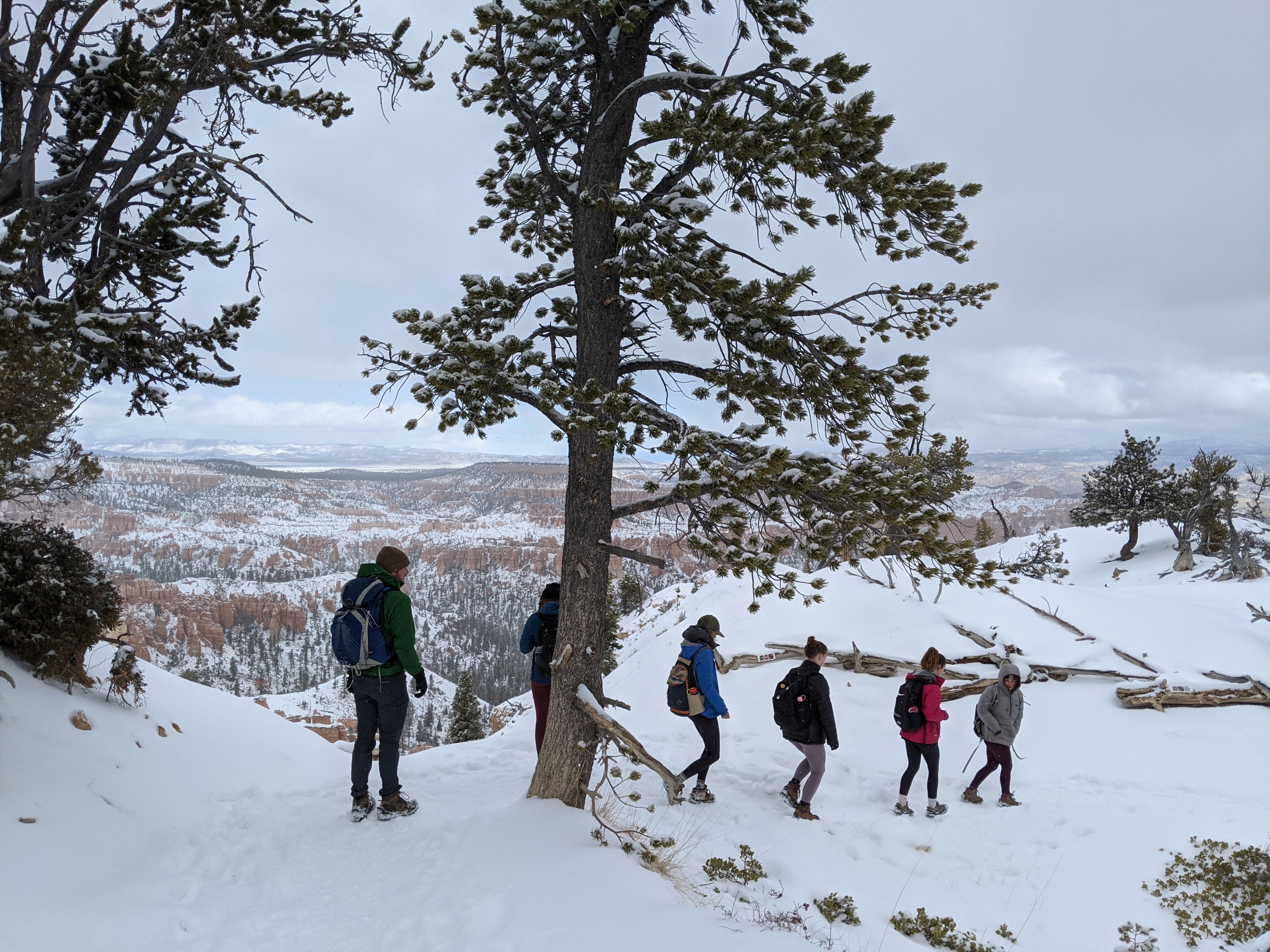 As soon as our curious personalities started hiking Oscar of course sparked a snowball fight with Quinn that then went on continuously the entire hike. Lots of fun although Ayla got a few minutes of blurry vision from a hard snowball to the face and our backs were wet from back shots. The hike covered about 7.5 miles ascending and descending throughout the canyons. Brynne stated as we were Reaching high elevation with thick snow coming down that she felt as though she was in a snow globe and I couldn’t have agreed more. It was magical. The hike then ended with stiff feet and rumbling stomachs. We were so stoked to snack and get on warm ole deb (our bus). 5 minutes passed and we were all zonked. According to Ayla I was drooling and snoring on her shoulder. Overall Bryce was a memory for the books. 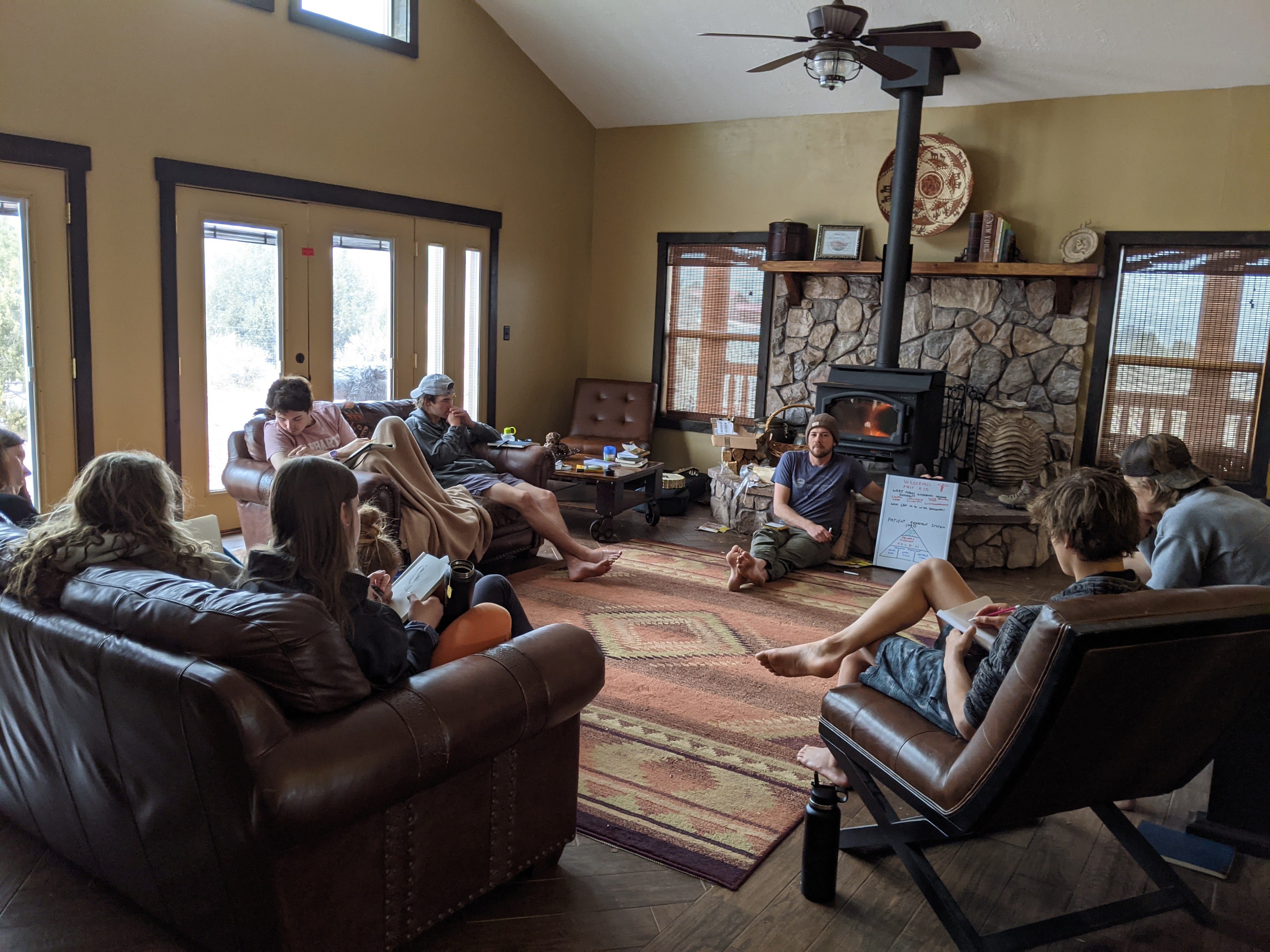 The next two days consisted of lots of focus for our wilderness first aid training with Quinn and Erica. We learned splints, wound variations, how to hypo wrap, evac calls, and much more. As class went on in the warmth of our wood stove fire lit cabin, snow was dumping outside. This resulted in an organized snowball fight where we all geared up and headed out for some light hearted battles. Quinn joined us and was a main target out there although sniped a few of us. Cabin fun couldn’t have ended without someone falling on a cactus so Oscar of course took one for the team and got a cactus to the leg, some of us used this as an opportunity to apply our wilderness first aid knowledge! Sasha, Ayla, and I had lots of nostalgic fun as we built a snowman named Roxanne, Erica also crafted a very detailed cute polar bear. After lots of fun in the snow and by the fire the day ended in an amazing classic soup dinner from Brynnes family recipes.

This stay at the cabin was great and refreshing minus the intense putrid gas coming from everyone in the group. At one point we had to thoroughly air out the entire complex to eliminate the smell. Although there was light at the end of the tunnel and the next day we were all feeling better! 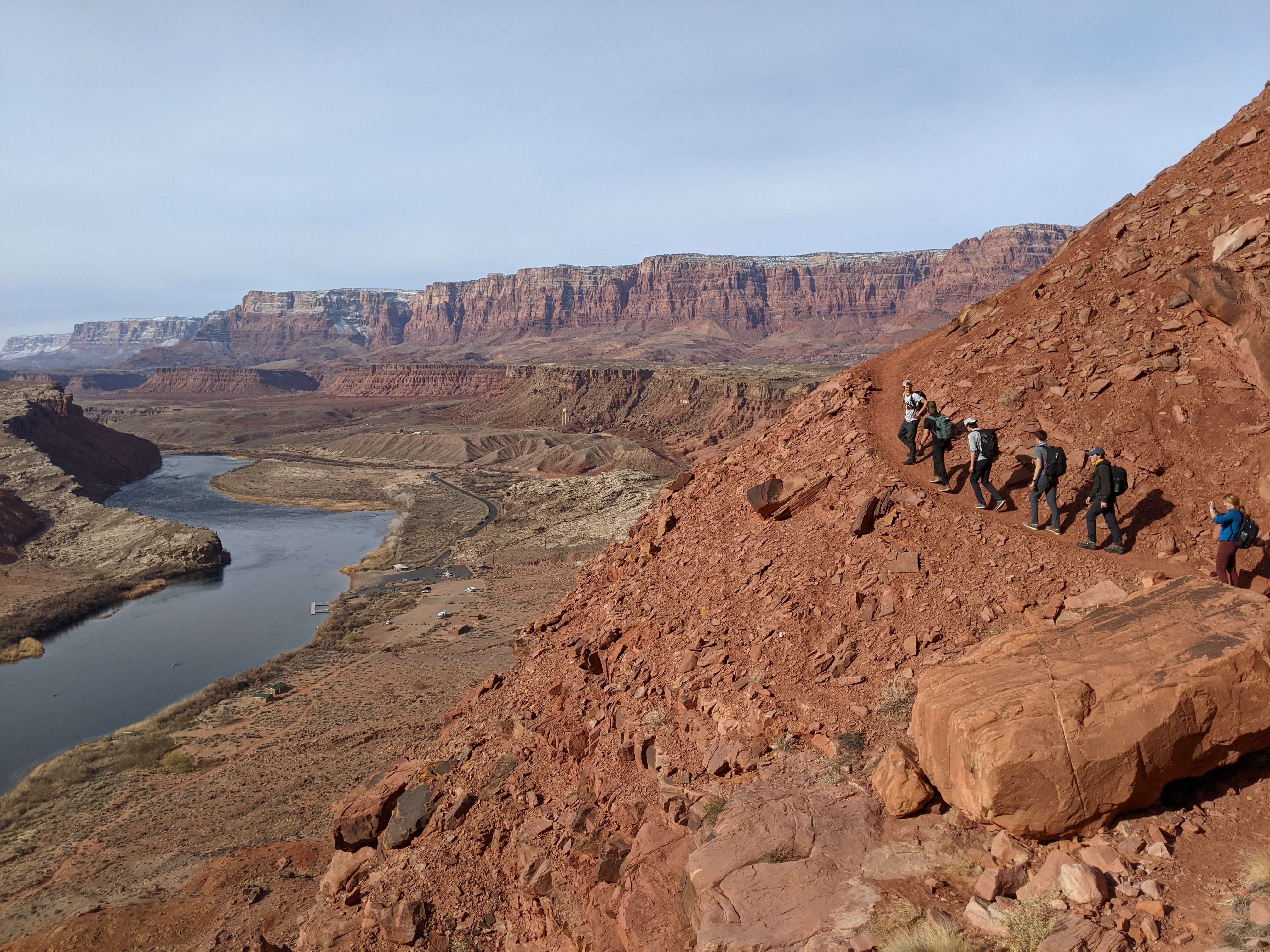 Lees Ferry was our next destination where we spent a short but sweet night! Unreal views of the roaring Colorado river as we set up camp and then headed down for some real experiential learning. Testing the water quality and discussing the organisms that inhabit the river as we sat alongside the bank. The next day we packed up camp and set out for an insane hike that ended at a plateau looking over the river that we would soon be polar plunging in. We hurried down the trail hoping to break a sweat before emerging in the cold river. It was SO WORTH IT! The rejuvenating feeling of cold fresh water gave us a blast of energy and excitement, we all felt as though we had taken a shower which was definitely a good feeling. 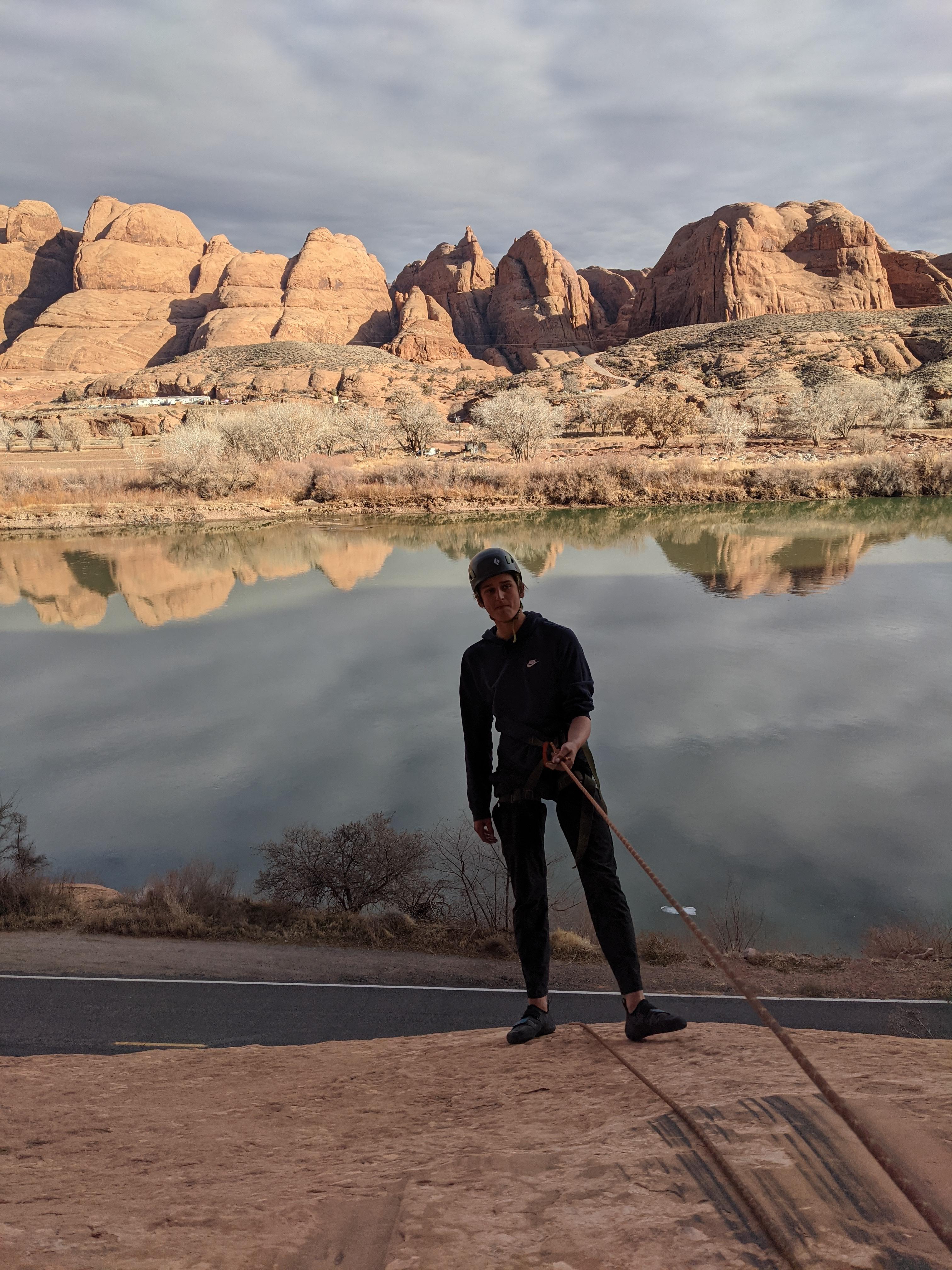 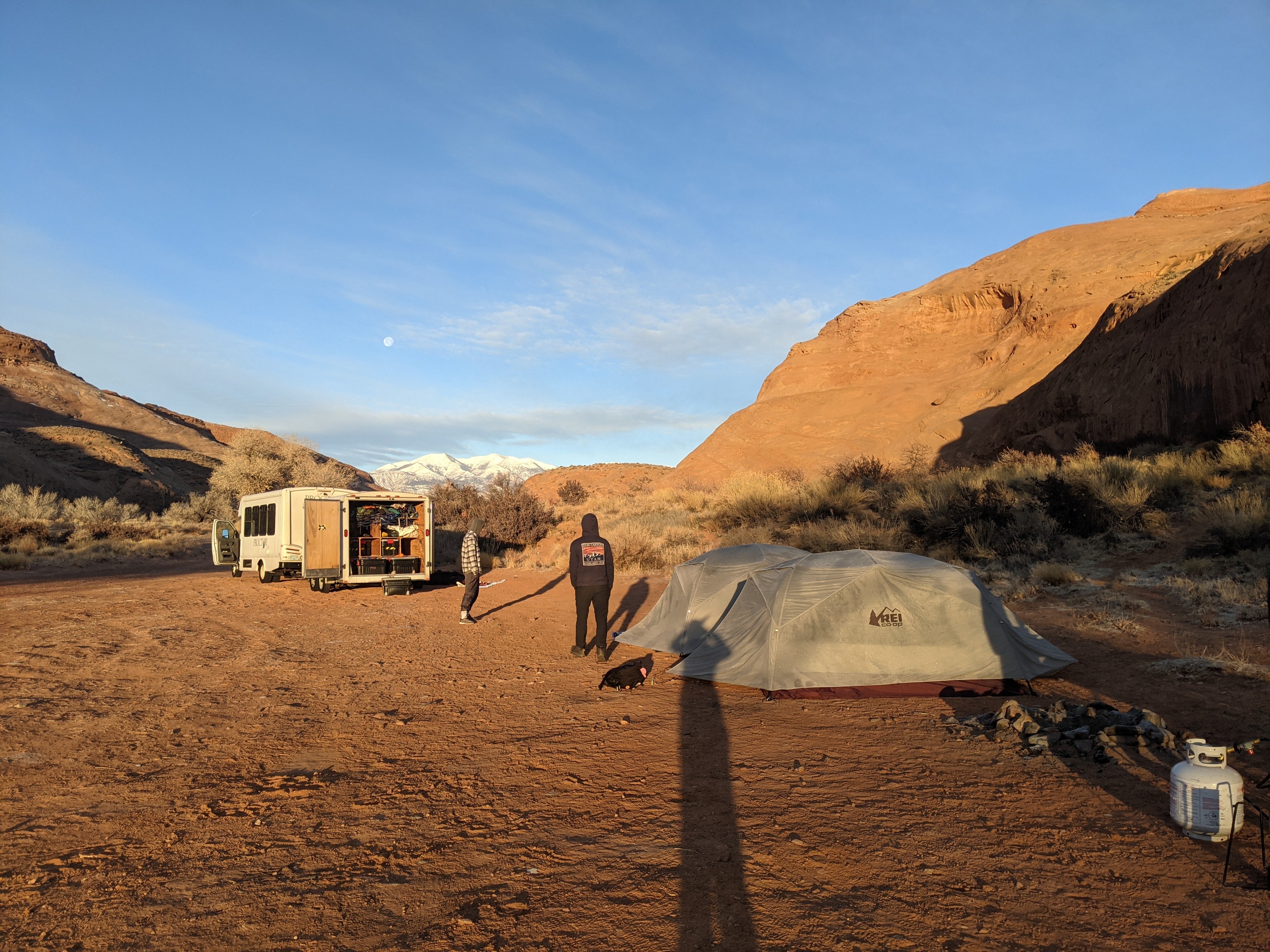 After leaving Lee’s Ferry we spent a quick night in the cabin before heading to our next destination, North Wash, although it was cold and we were all a bit tired out we set up camp and our hammocks to make a comforting site. We all went to bed pretty early that night after a large dinner. 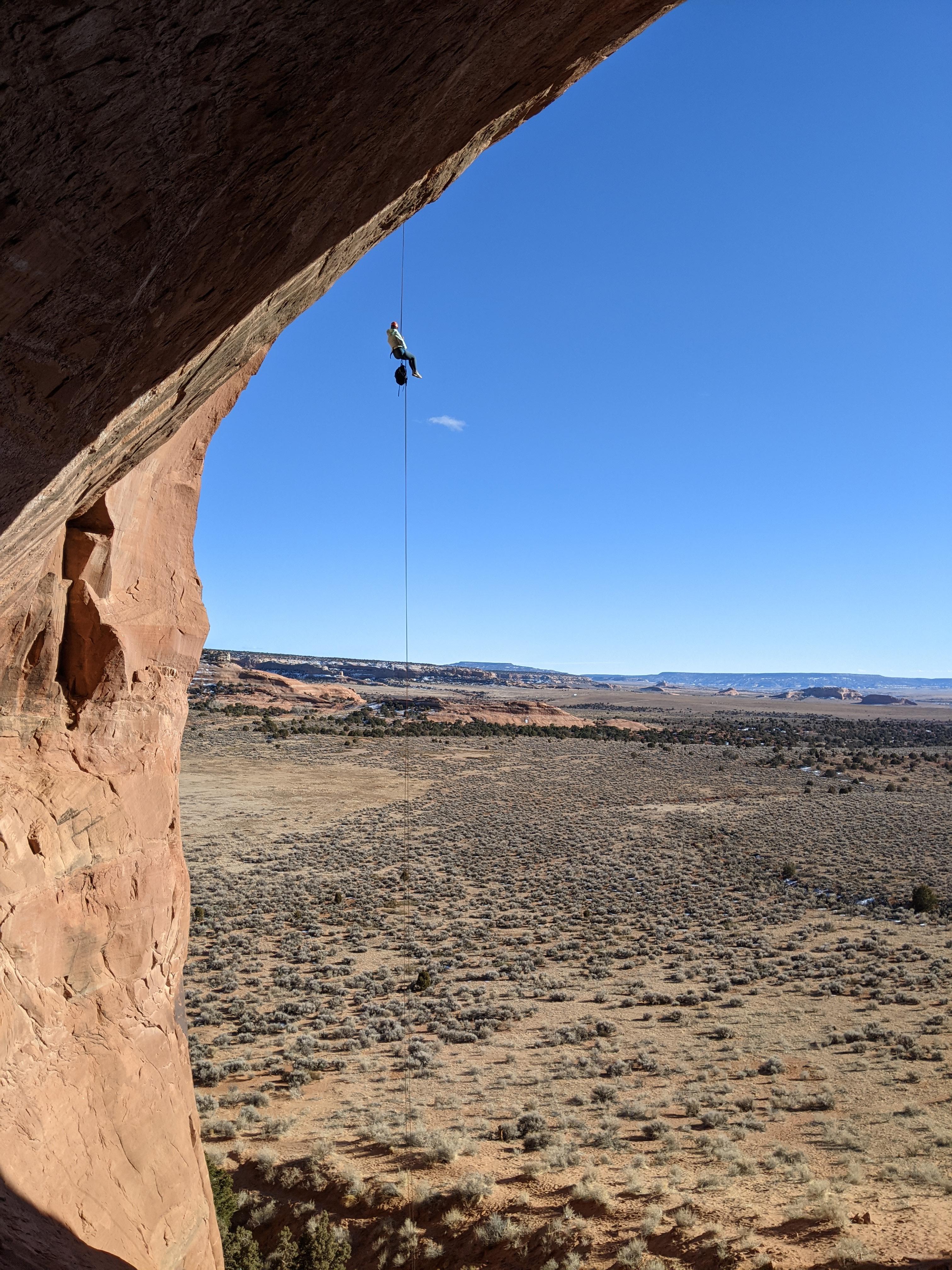 The next day was one for the books, thanks to Quinn and Erica and their experience with canyoneering we had a crazy day in the canyons. Starting off with some scrambling up a big rock hill. The climb then ended at the top of a series of canyons in which we repelled down. Oscar volunteered to go first and strapped into his harness and with trust leaned back down the canyon as he kicked off the side and repelled down. Soon after we followed and each of us went down the first one where we practiced tying our safety knots. Unfortunately I got a bit excited on my first attempt and took a digger, luckily I could laugh it off and nothing got hurt. We then repelled down 6 more canyons, each a total different repel which was insane. On our journey stemming through crevices and canyons, Oscar, Tahg, and Hank all took the liberty of all sharing a wag bag (bag you excrete your waste into) that Brynne had thankfully had in her pack. Unfortunately I was trailing behind Tahg in the narrow canyon who happened to be carrying the wag bag. An amazing day followed by a hardy pasta dish, thanks Quinn and Erica!

The next day we packed up and headed to Moab, on our journey we got the chance to listen to Harry Potter, lots of us were stoked. After some intense chapters of Harry Potter we stopped at the Valley of Goblins state park. This place was amazing, it was a valley of millions of rocks that resembled goblins. To me, it felt magical. I hunted for the perfect rock that resembled each person in the group, Quinn found one that he thought looked like him because it had a big head! As some of us searched for magical rocks, others jumped from rock to rock as if they were doing parkour like the movies. Lots of fun in the valley although we had to say our goodbyes to the Goblins and keep heading to Moab. Moab greeted us nicely with a slice of sun left in the canyon as we set up camp and Oscar and I jumped in the Green River! Lots of fun! Can't wait for more adventure!