Entering Colorado provided Mountain Classroom with the opportunity to head to over 10,000 feet in pursuit of snow. We made home at Leadville's High Mountain Institute where we rented skis and down pants, among other gear, for going adventuring in the Mosquito Range. Our mission was to enjoy the spring skiing and learn about how adaptable the human body is at elevation and in snow camping conditions. It was a blast!

If you’re reading this, wiggle your toes. Can you feel them? Probably. Was this a luxury you were conscious of before I brought it to your attention? Probably not. I was once this way too. Not anymore. 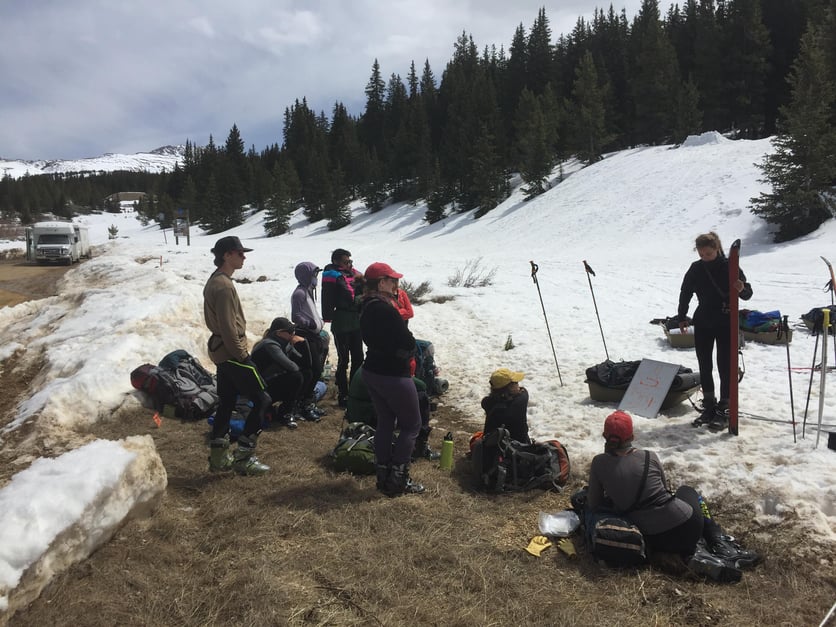 Our Mountain Classroom group became cripplingly aware of the circulation, or lack thereof, in our various appendages this past week. It all started at our first campsite, deep in the mountains of the Colorado wilderness, elevation 11,700 feet. Before we could pitch tents, set up snow kitchens, and determine fecal receptacle locations, we had to pack the snow. This consisted of shuffling around on skis awkwardly and then stomping and jumping around in ski boots in order to compress the air bubbles in the snow. The end product is a few step-down paths and patches, hopefully weight-bearing — however, there are exceptions.

Our first morning, I woke up and reluctantly crawled out of my toasty cocoon. It took exactly one lift and drop of my slippered foot to realize that the glistening sun had more EFFECT THAN WARMTH. The icy sheen that once coated the deep snow was thinned, and my right foot dropped further and further. I sank down into thigh-deep snow. Withdrawing my leg, I removed my bootie and shook out the clumps of snow and ice. But it was too late—the wool socks I had put my heart and soul into maintaining were wet. My feet were cold.

Every one of my peers suffered the same affliction right alongside me countless times over the next five days. Our endless efforts, breaths sucked in and feet placed daintily, were to no avail as we collapsed again and again into the snow below. Time at camp was interwoven with a pattern of tiptoeing, crashing, cries of frustration, shaking out boots, and repeat. 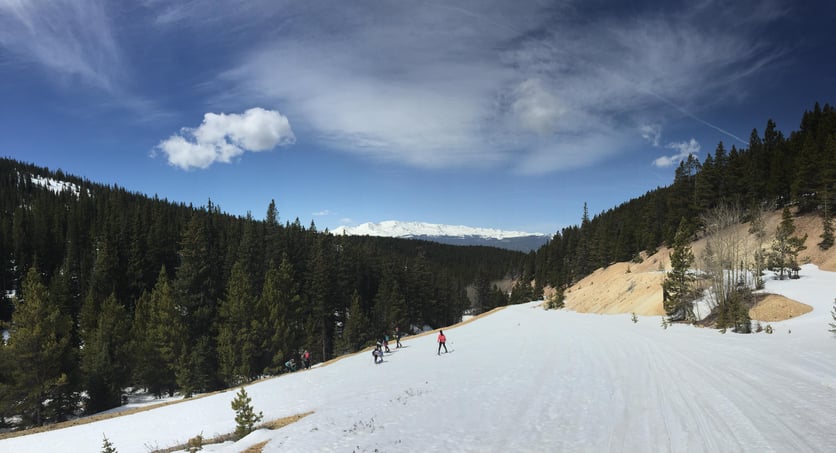 It wasn’t until we were nearing the end of our time on Prospect Mountain that we all made an unspoken agreement to embrace cold feet. For me, it happened on my way to prepare dinner with my cook group. My left foot fell through, I sighed a sigh of defeat, and continued to stomp haphazardly to our patch of kitchen. My feet were soaked by the time I arrived, but a little tummy time (frozen feet tucked under a friend’s jacket on their warm belly) revived my toes to the point of tenderness. For others, tardiness to evening meeting was motivation enough to give up in their pursuit of dry feet. We learned, eventually, to accept the cold. We learned to cuddle our frozen socks in our sleeping bag at night to thaw them. We learned that frozen feet were a small price to pay for the surrounding towering snowy peaks and distant puffs of pine. We learned resilience, acceptance, gratitude for the small luxury dry socks have to offer—none of which stopped us from squealing with delight on the bus ride back when our toes were finally pink and warm.

Wiggle them one more time now. It feels nice, doesn’t it?

That is what I said, because it was cold.

The human body needs around 5000 calories a day to maintain proper functionality in the extreme cold. When temperatures drop and altitude increases, we burn fuel more rapidly, and must offset this drastic increase in energy consumption by eating more. Throughout the course of our backcountry skiing trip, the importance of maintaining a healthy caloric intake was stressed more than ever.

“Stove’s out,” I called to K, my designated sous chef. She tossed me a lighter and I frantically attempted to relight the fire. The stove’s metal valve stung my bare hands. Every spark I managed to ignite pattered out in the frigid air. Even when the stove did relight, its fiery roar lasted only a few seconds before turning to a disappointing hiss. We brought it to Coco, who suspected a carbon buildup in the stove’s piping, blocking the flow of gaseous fuel.

We had little more success with the backup MSR Dragonfly. Though I had no trouble lighting the stove, its flame burned cold and weak. Eventually, we forfeited the battle and resorted to frozen pizza bites for dinner. That night, as the wind howled and the cold air whipped at the corners of our tent, I crawled into my sleeping bag, defeated.

The following morning, as my cook group enjoyed a cold breakfast of yogurt and granola, we were made aware of some bad news: Timbah had contracted a sickness in the night. He lay immobilized in his tent, unable to participate in the day’s skiing. Coco guessed that he unintentionally ingested cooking fuel (we later discovered that it was in fact a particularly nasty stomach bug). Additionally, three other members of the group had fallen victim to symptoms of altitude sickness: headaches, dizziness, and nausea. 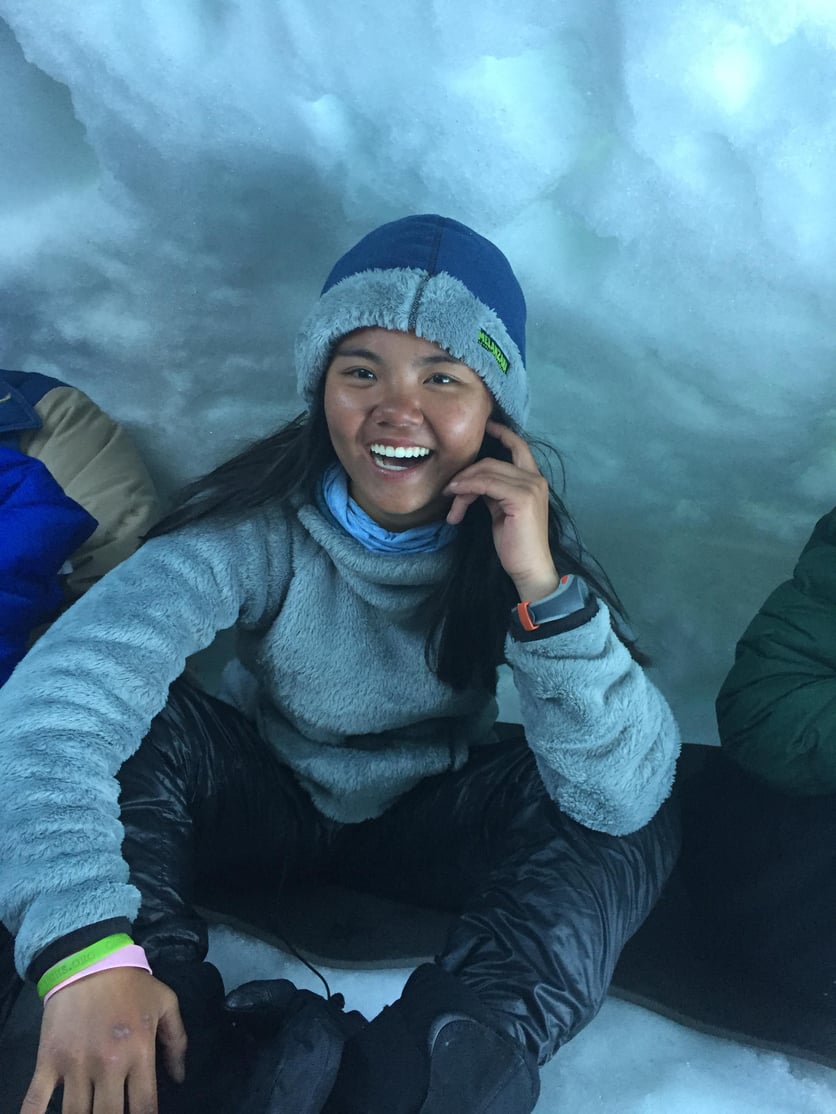 That evening, Spencer, our Leader of the Day, together with Coco, made the executive decision to alter our route so that we could retrieve back up fuel pumps from our trailer. The next day, we meandered our way down the mountain. We had lunch at the trailer before returning to the trails of Prospect Mountain. Our afternoon was filled with sliding our skis through the soft Colorado snow. 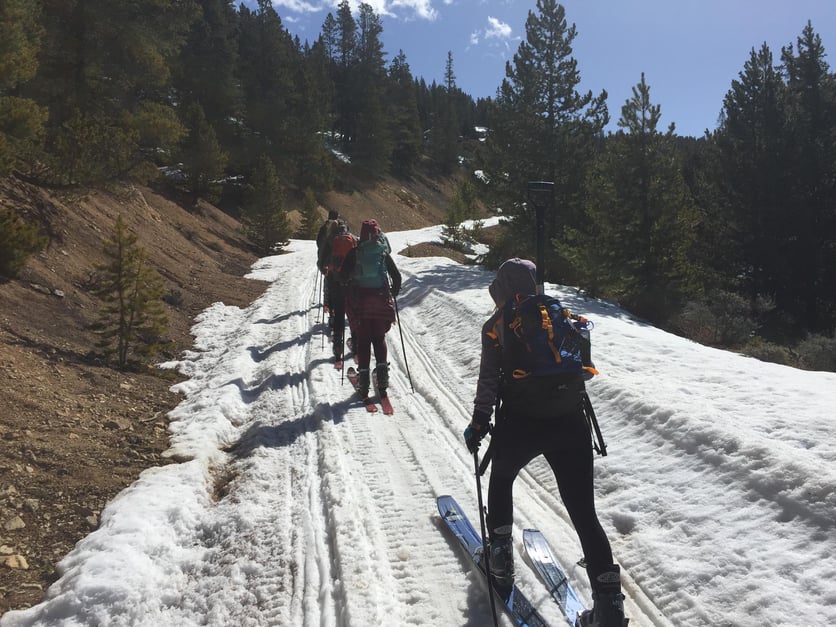 Things don’t always go according to plan. Road bumps appear suddenly and without warning, and it is up to us to embrace these obstacles. Despite meticulous planning and preparation, Coco, our trip planner, could never have foreseen our stoves failing or Timbah’s stomach bug. But by responding and adapting appropriately, our group was able to find success off the beaten path.