Proctor Academy's Spring 2018 Mountain Classroom group convened in Las Vegas to kick off their term-long adventure across the United States. Understanding the intricacies of rock climbing is critical to the program's curriculum under the leadership of faculty members Kate Sabo and Alex Lyttle, so the group spent the first few days of the term in climbing camp at Red Rocks. Enjoy this abbreviated blog post from Katie '18 (the group went out of cell coverage and was only able to send a portion of photos and videos they took before their weeklong hiking adventure in the Grand Canyon over the next week). 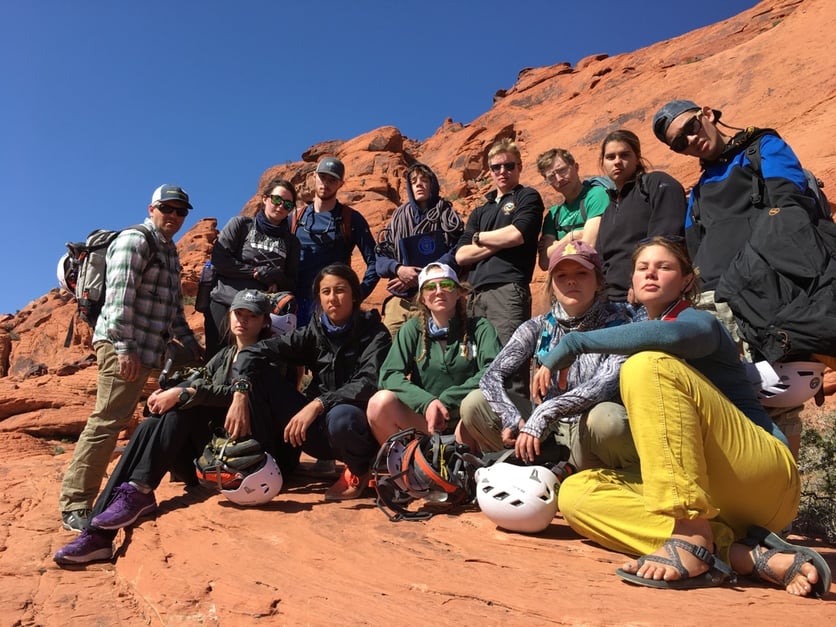 At first the Nevada landscape felt like a dream, like someone had replaced/filled the sky with a giant green screen. The group started the trip by hiking up the surrounding hills and by playing bonding games. After orientation day, rain clouds filled the landscape and the rain clouds stayed through the next day. The rain changed our plans for the first day of rock climbing since the red rock was too soft. So we belayed on the campsite from the beams of the metal camp structure. Frank and I became fast climbing partners and quickly learned to tie eight knots. I was initially nervous to rock climb but everyone as a group was super supportive and we all cheered each other throughout the whole experience. 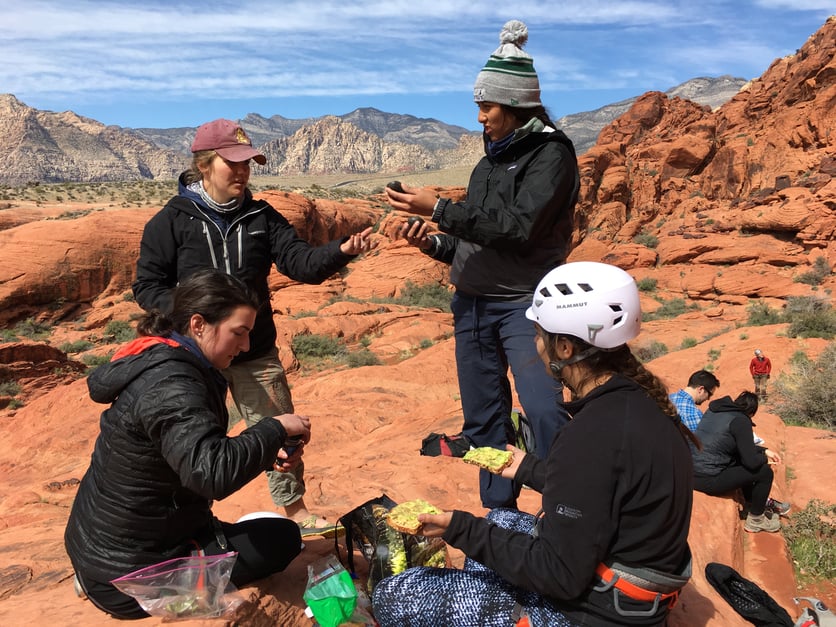 After we decided to indoor rock climb in a sweet triple decked rock climbing center. We tested our skills scrambling up the holds and dropping off onto the soft cushions. This was the start of our experience climbing with the pros. Then we headed into downtown Vegas where we got to explore Fremont Street. There, we saw some crazy street performers like an angry adult baby and some of us were lucky enough to fight a stormtrooper. Every couple of minutes people would zip-line above us and the street was packed with an equal number of people and slot machines. Later, to kick the night off, a small group of us were able to run up the hills to see Vegas in the night.

The first night of rock climbing was chaotic. All the girls decided to sleep outside under the stars. We very quickly realized it had started raining and made a mad dash to the tents before the clouds completely rolled over the mountains and onto the campsite. Throughout the night, lighting and thunder complimented heavy winds that would completely flatten our tents every minute. 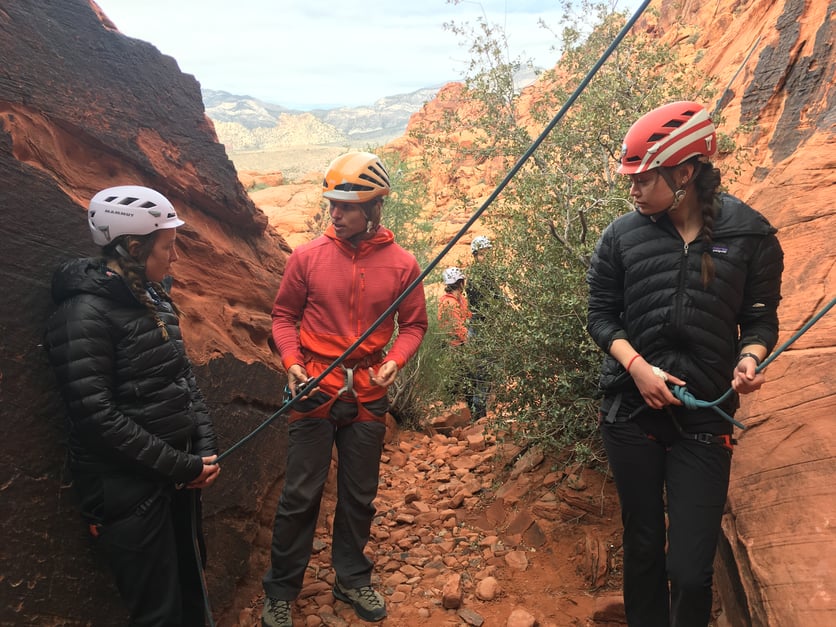 Luckily, the next day the sky had cleared and the sun came out allowing us to rock climb on limestone. Cody, our climbing guide and an encyclopedia of endless puns, guided us up the limestone and to a scenic view of Vegas. Unbeknownst to us the limestone rock face we climbed was sharp and many of us left with battle wounds. Then after lunch we headed back onto the bus. After a bit of driving we went to what we call the Loop - a scenic loop that holds the Red Rocks. There we repelled down the side of two cliffs, which was both terrifying and exciting at the same time. 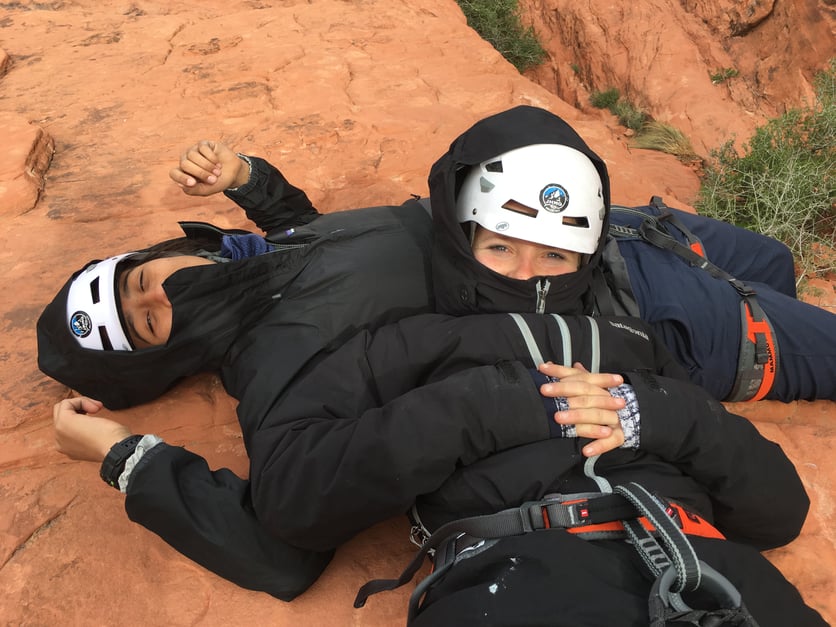 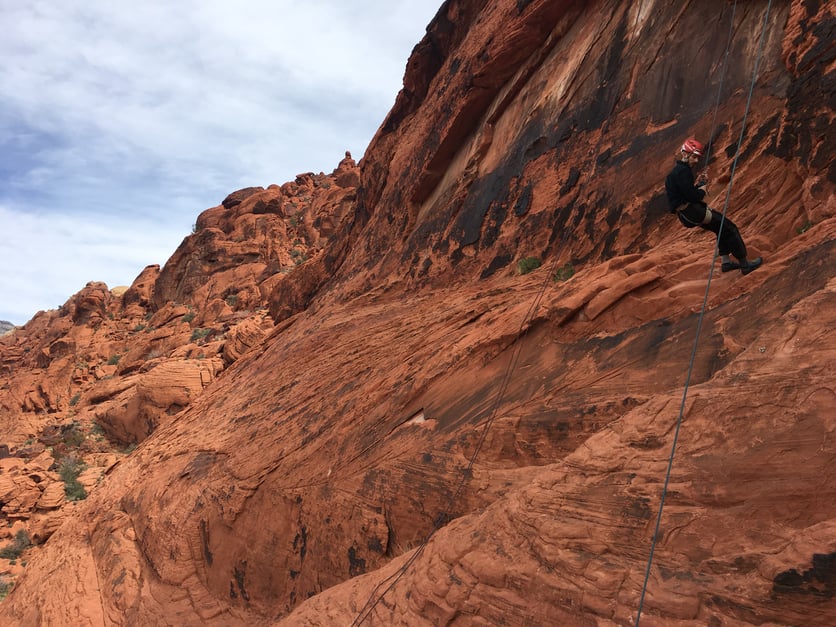 Finally on the last day of rock climbing we got to climb on the Calico Hills which is part of the Red Rocks. We all stared up the gigantic section of climbing walls which contained climbing routes with different grades of difficulty. We spent the whole day climbing and all of us managed to get to the top multiple times. To end our climbing experience we headed to Vegas and into a thrift shop to find the wackiest stuff possible for a dance off with a neighboring campsite (that ended up falling through but thrifting was tons of fun). By the end of the week I can say that the group has bonded together as a team that runs up mountains, climbs rocks and tries on the funkiest clothes together. We packed up in excitement for more adventures to come. Kevin wore an Elsa dress and Kevin was so cool.