Proctor's Mountain Classroom program reconvened for the Spring Term with a new group of students ready to embark on the adventure of a lifetime over the next nine weeks. The group arrived in Tucson, AZ last week and headed to their first campsite at Gilbert Ray Campground. We oriented to our academic courses and the equipment that will play a large role in our lives for the next couple months: the bus, trailer, kitchen, tents, and food planning systems. While in Tucson we also enjoyed an afternoon at the stunning Arizona-Sonora Desert Museum.  Our next stop: rock climbing in Cochise Stronghold! Enjoy student reflections from the first week of the term below. 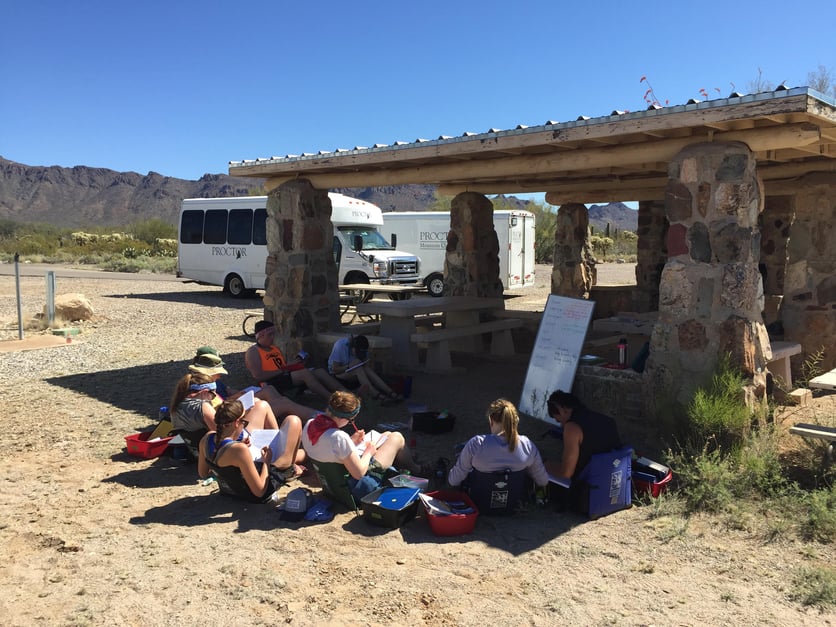 From the minute that the Arizona landscape came into view from our airplane windows, we have been filled with a sense of giddiness and wonder about our surroundings and the adventure we have begun. After some airport embraces, we stepped out into the hot Tucson day, and piled into our bus and new home. Throughout the whole day, Cassie asked, "Am I in Arizona?" and later reaffirmed, "I'm in Arizona." 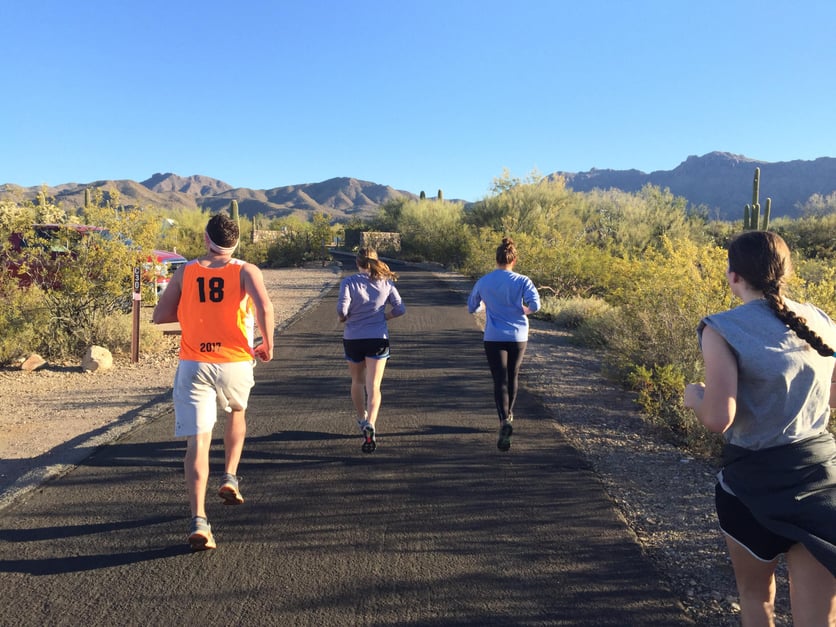 Though I had a firmer grasp on our geography, I understand what she's feeling. The entire group cannot believe that we are spending our spring term learning and exploring the outdoors in a whole new landscape. We drove to our campsite, admiring the many, many, saguaro cacti. The bus was lively with shouts of "Look at this one!" and "Look at that one!" There were so many that someone noted it looked like the mountains had leg hair. It was true, when I looked at the ridges I saw all the far-away forms were the saguaros. In New Hampshire we have trees, in Arizona we have cacti. I was surprised how the landscape was matched up so accurately with images we often see of the southwest desert; it seems too good to be true. The excitement we felt from the plane hasn't worn off, but rather it grows as we are given gifts of beautiful views and we became even more comfortable with one another. Later in our first day, we had a sunset on one side of our campground, and on the other a full moon rising over a mountain peak. This made me seriously consider Katie could be on to something when she said, "The plane crashed over Albuquerque, and we're dead right now, and this is heaven." This theory is a bit extreme, but it illustrates the awe and joy within each of us. 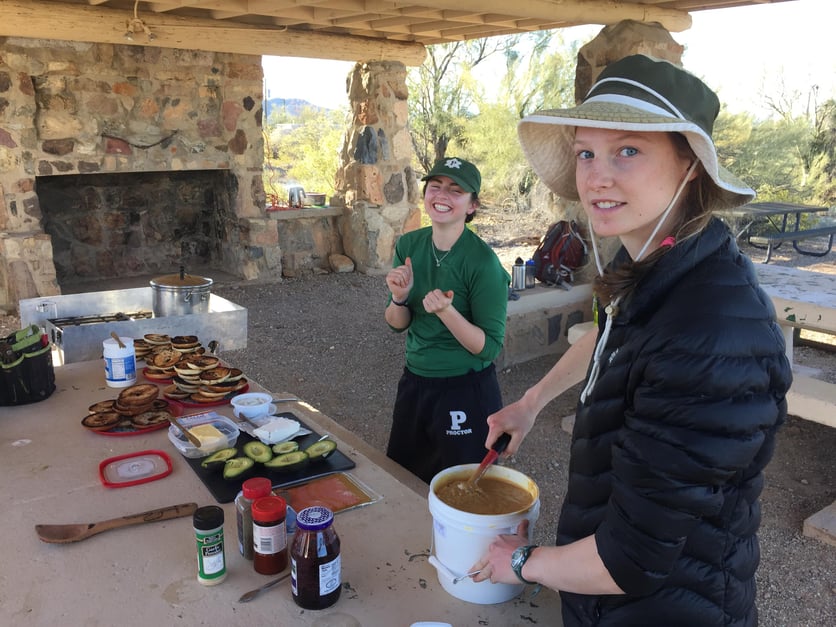 Our English class provided me with my first reflection amidst the whirlwind of starting the adventure of Mountain Classroom. Sitting in a circle, basking in the hot rays of the Arizona sun, Timbah asked us to think of three words that described our relationship with Arizona prior to our arrival. Words were shared around the circle: hot, prickly, rich, lost, vast. 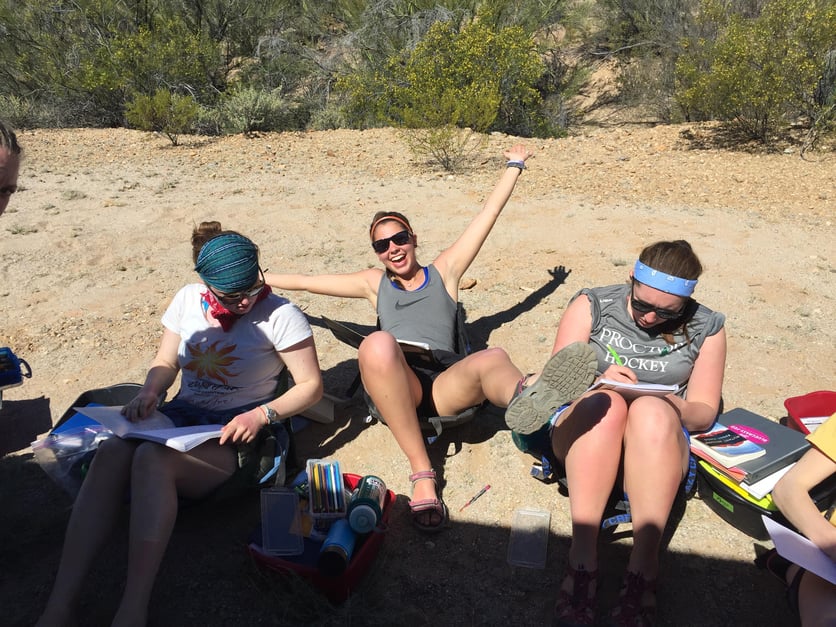 We were about to embark into the unknown, and I’m sure many of us feared we could get lost along the way. Yet, in only a few short days, I have observed us become a family, one that cares for each other in ways I could have never imagined. Our first excursion placed us in the incredible Arizona-Sonora Desert Museum. Upon being released to explore amongst ourselves, we set out to explore every inch possible. We were divided into smaller groups, yet the second our paths crossed with another group our faces immediately radiated excitement and joy, and we would race to tell the other groups about the three-hour-old big horned sheep or the playfulness and euphoria exemplified by the otter. While those animals were incredible, I think the largest imprint left within our minds was that of the hummingbird that changed colors when he was in direct sunlight. In the shadows, he was composed of elegant forest green feathers, but the slightest ray of sunlight transformed his countenance into a breathtaking, shimmering neon pink.

Jaws on the floor of the aviary, we could not believe the sight in front of us. I like to look at the hummingbird as an example of our group: before our arrival, we were in the shadows of our fears and doubts toward Mountain Classroom, and group dynamics. Yet the second the rays of Mountain shone on us, we instantly transformed into a radiant group of teenagers filled with pure euphoria and endless laughter. I believe if Timbah asked us to describe Arizona in three words today, we would all have the same three: joy, laughter, and family. I am so happy to have such close friends by my side to share this experience.