Proctor en Monteverde: A Day in the Life 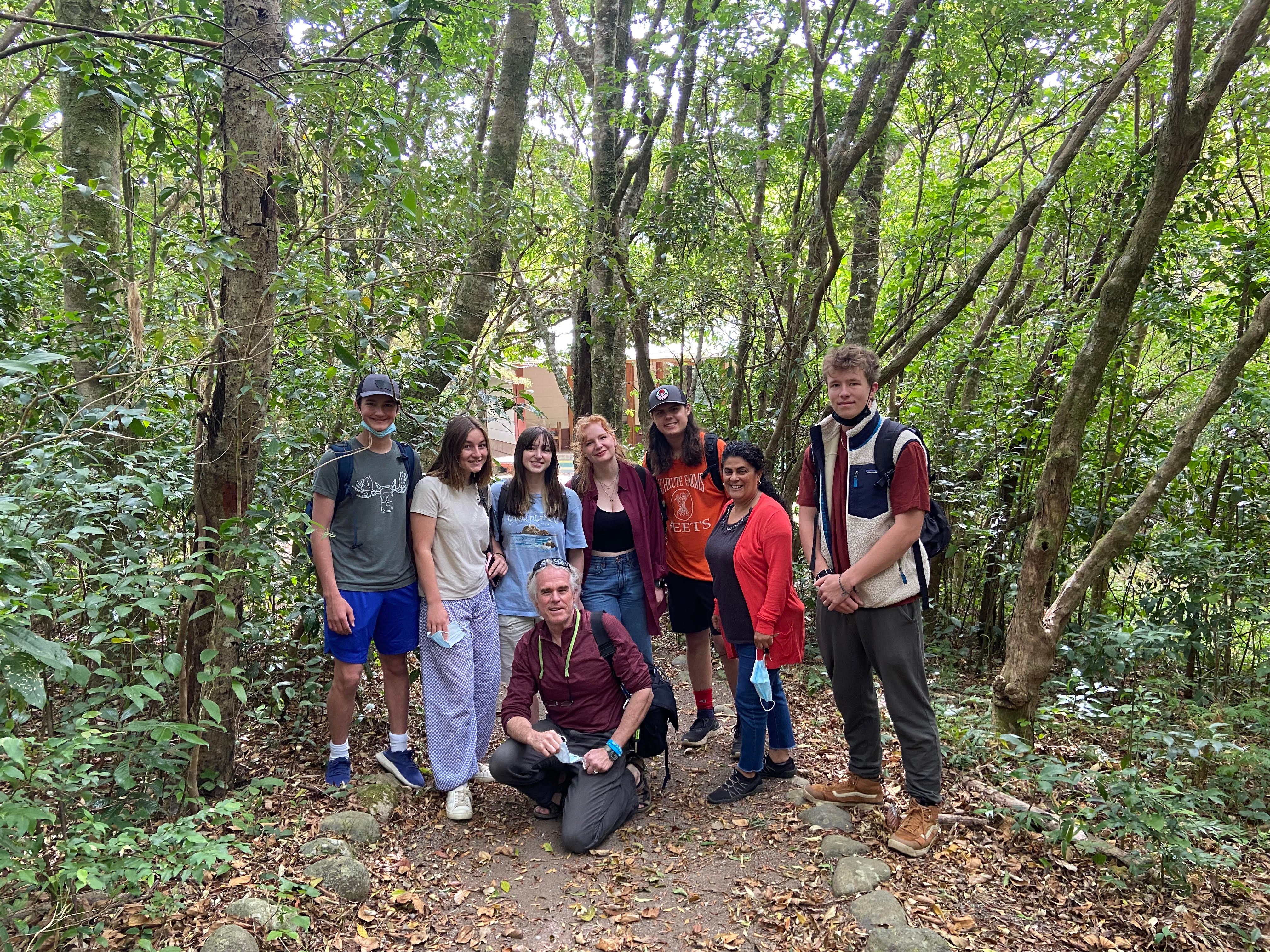 Throughout his visit to Monteverde, Brooks immersed himself in the students’ lives, sitting in on all the action in their Spanish class with Eva, meeting with on-site director Kathia and visiting a local high school where Proctor students have their lunch on Fridays with local students their age to practice their Spanish and develop relationships outside of their group, and watching portions of the group’s Humanities class covering the social, economic, and environmental impact of the United Fruit Company on many Central American countries, including Costa Rica.

Following Humanities, Brooks joined the group on a hike with Alberto, their science instructor, for Cloud Forest Biology where he along with the students identified plant species and then had the pleasure of climbing up and inside a strangler fig tree during our walk. After the field trip, the group capped off the day with dance lessons before having a farewell dinner at Sabor Tico!  Read student reflections on their recent weeks in Monteverde below! 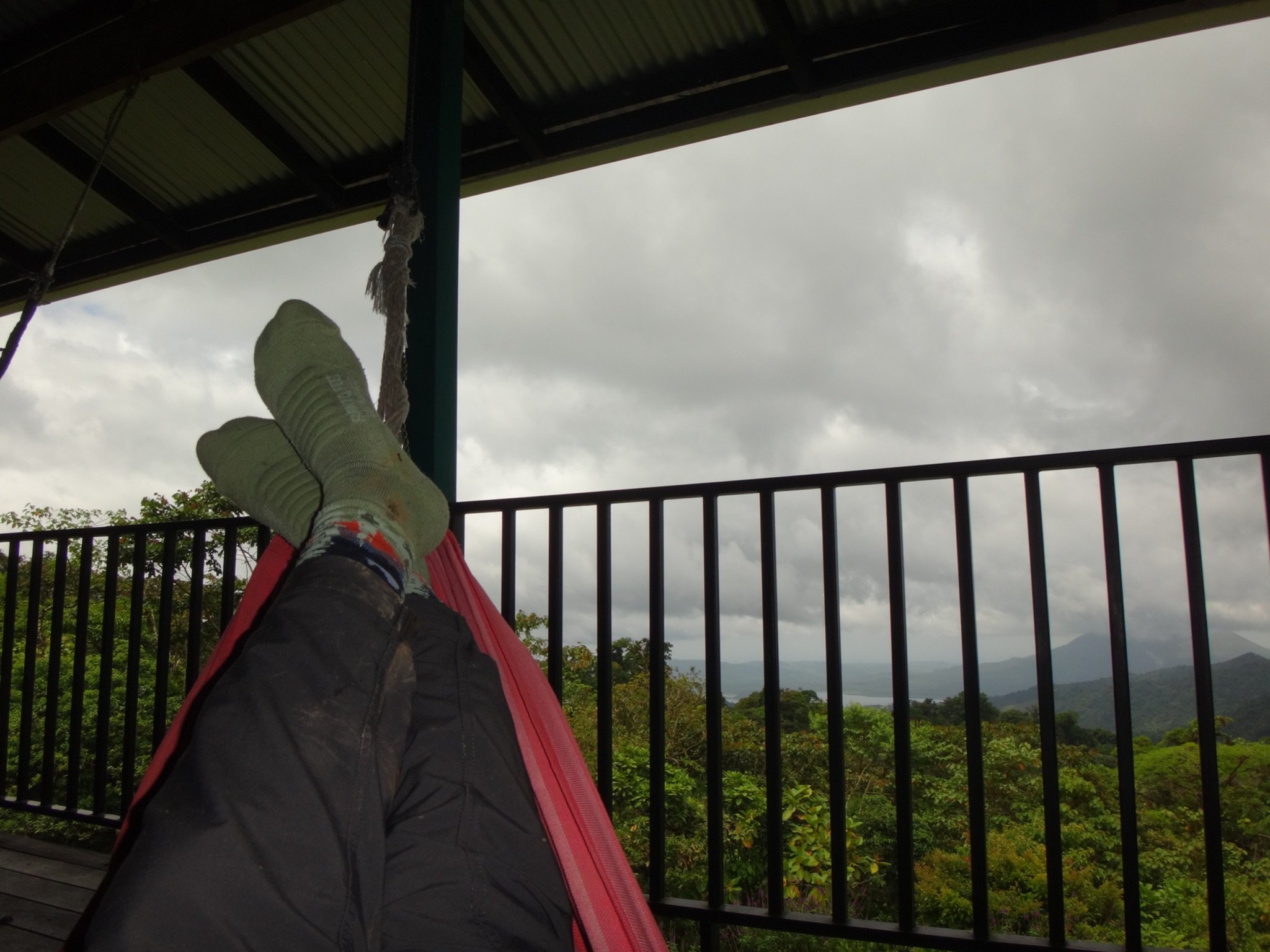 As my nerves settle here in Costa Rica, I’ve become a part of my surroundings in a new way. I’ve surrendered to the weather. Instead of trying to predict whether the sky will yield rain or shine, I simply bring a rain jacket and shorts wherever I go. The dogs on my street have finally lost interest in me and refrain from saying hello with barks and howls every time I walk by. It's fulfilling to feel myself grow comfortable and casual with my life here in Costa Rica.

Last weekend, when we traveled to San Gerardo, I was met with a sense of tranquility and  deep happiness. Walking through a blanket of mist, crouching under a giant log, or even just swinging in a hammock reading a book next to my friends, it was all incredible. Mark Wainright, our tour guide, was an amazing teacher and I learned so much about the flora and fauna of Monte Verde. My favorite part of the trip was learning how unique and distinct each creature of the forest was, and why they evolved to be that way.

I took this photo (above) because I felt like in this moment there was real tranquility. This was right after we arrived, hence the dirt on my pants. I was so happy to finally arrive and put my feet up for a few minutes. 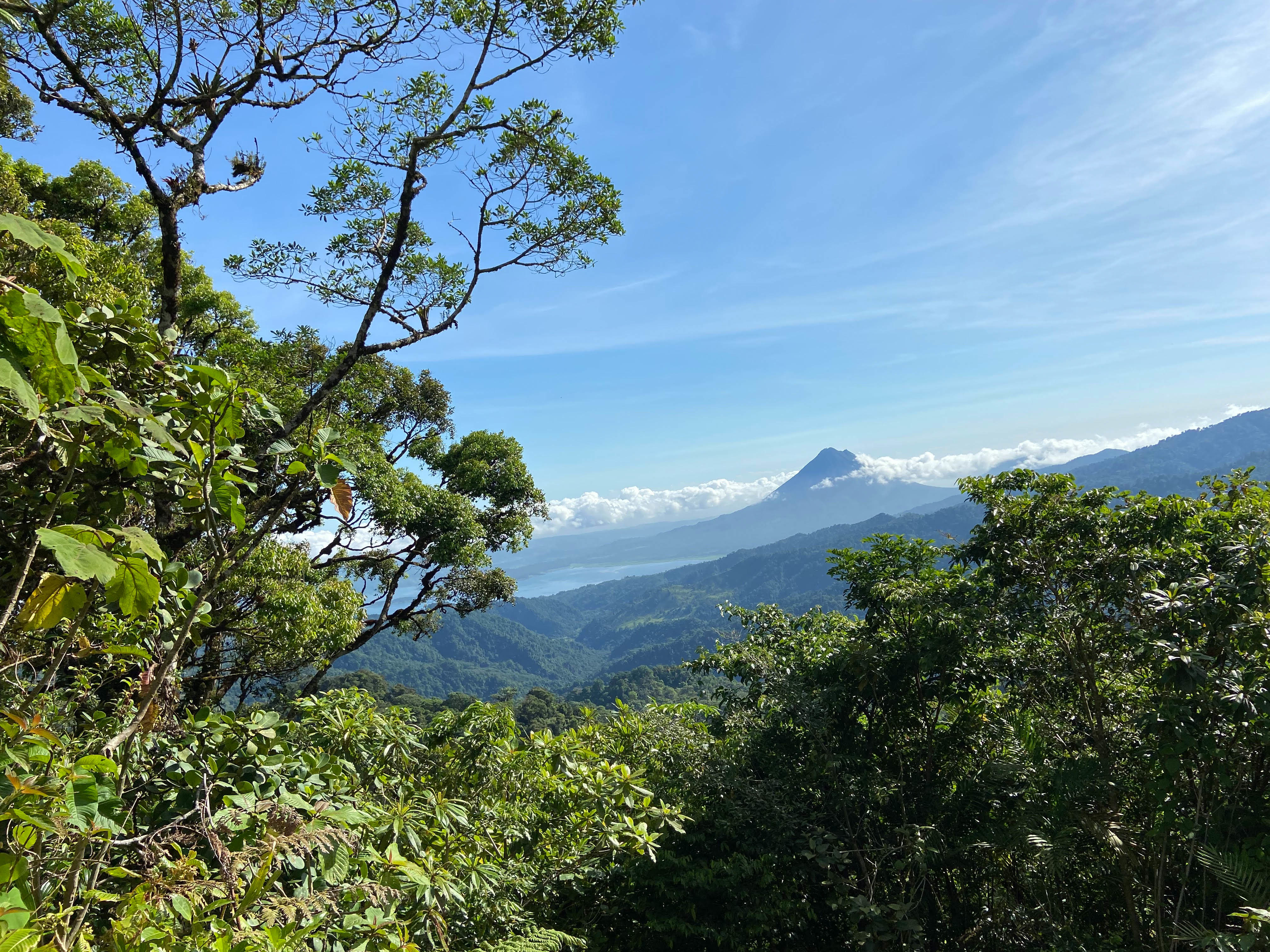 One of my favorite parts of our trip to San Gerardo was the sunrise. A few of us woke up at 5:00 am to see the sunrise near the Arenal Volcano. I woke up to the orange sky and got to watch the sky change colors and the day begin. I could hear the birds and wind throughout the morning. It was very peaceful to sit and watch the sunrise and simply be in nature for a few hours.

This weekend the six of us were fortunate enough to go to San Gerado, where we had a perfect view of the Children's Eternal Rainforest. Even though we have been together nonstop this was unique to be completely disconnected from the rest of the world and only have each other and our surroundings. We got to watch a beautiful sunrise from our hammocks, making it an instant highlight of our trip.

This week we went to a research station in the children's eternal rainforest (also known as The BEN). It was a really beautiful view and living so close to the jungle was amazing. We went on two walks, one was a 3 mile loop through dense jungle. The other was during the night and we got to see a tarantula, frogs, and UV spiders. My favorite part was the sunrise behind the Arenal volcano that would be visible periodically through the clouds. 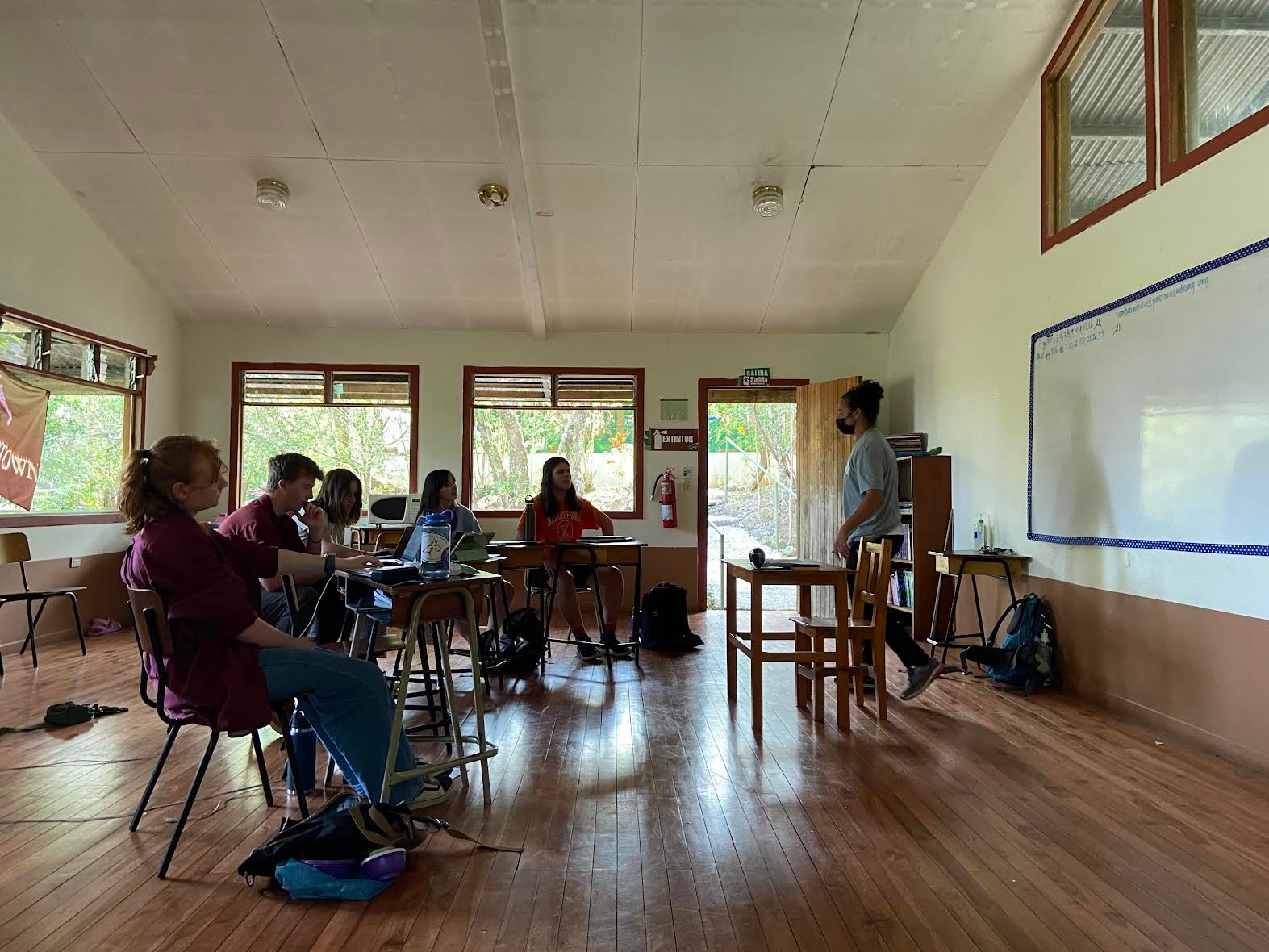 Hola from Costa Rica. It's day 28 of our Costa Rica adventure. Since the last blog post we have been on a few excursions, such as a rain forest hike, exploring a very eco-friendly hotel, and more recently a stay at the San Gerardo Field Station. The San Gerardo Field Station is a research facility that is located in the Children's Eternal Rainforest. It’s mainly meant for researchers who are researching the rainforest, and school classes like ours. Originally, we thought we would be camping in tents, but when we arrived after our three hour three mile hike, we were met with a very nice building for it being in the middle of a forest. It has a nice deck which overviews the Arenal Volcano – still classified as active. Since we were in the Cloud Forest, the clouds were constantly changing. Sometimes the clouds would show the volcano for a while and other times it would remain hidden. That night we unfortunately delayed our night hike till the next night because of the heavy rain. So all of us relaxed and hung out. The rest of the night was uneventful, until Ben left the door open and the light on, leading moths and other bugs into our room. So at 10 p.m., Ben decided to kill some of the bugs by hitting them against the sheet metal roof which was very loud.

The next day we had a nature hike where we went down some of the mountain and saw birds that nest by hanging off of the tree branches. We returned back to the facility where we had a presentation on the frogs of the rainforest and how they have mostly disappeared. We ate dinner, watched the sunset and then headed back out to do our night walk. We went and saw a tarantula and a bunch of other bugs and frogs. The next day we had breakfast and started our three mile hike out of the rainforest. 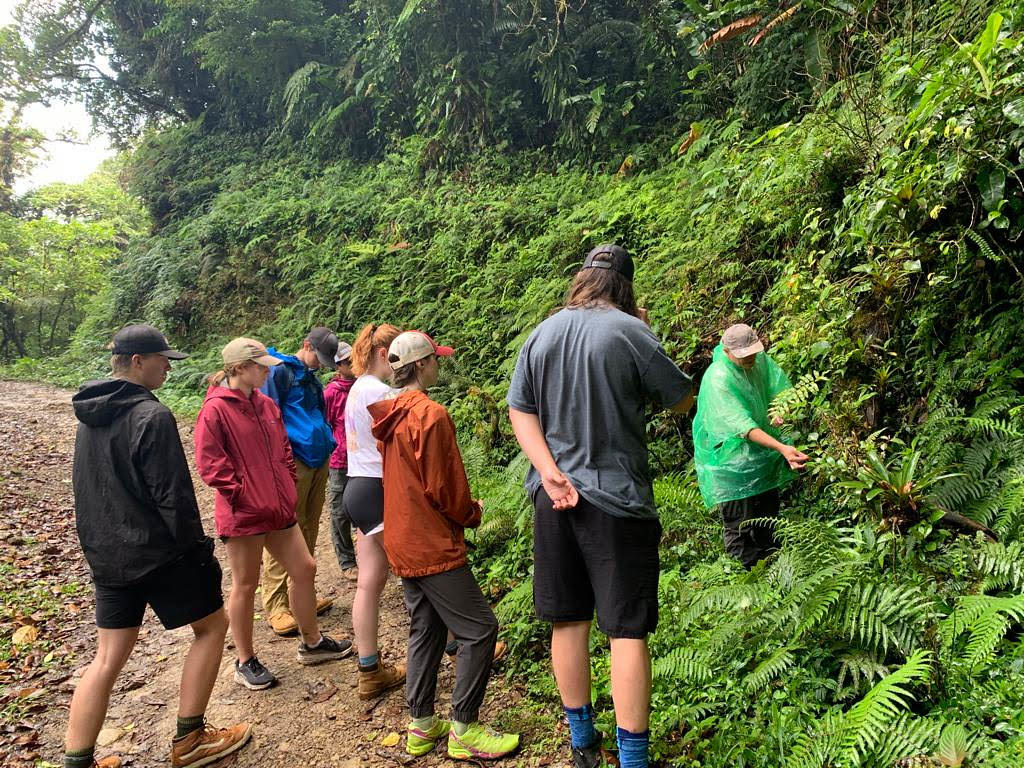 This past weekend, we all piled into a bus and headed to the San Gerardo Field Station. We hiked to the research facility where we would be spending two nights and three days – without wifi or service. We had endless amounts of coffee and tea, as well as wonderful home cooked meals three times a day. We had some lessons about the decline in amphibians and the general area. Then, we went on hikes where we would learn more about the evolution of plants.