The five sophomores studying on Proctor en Monteverde this winter share an update as they surpass the midpoint of their term abroad. After a three day, two night trip into the Children's Eternal Rainforest guided by renowned wildlife biologist Mark Wainwright, the Bella '22, Katherine '22, Patrick '22, River '22, and Cassidy '22 shared insights into their time in Costa Rica thus far. 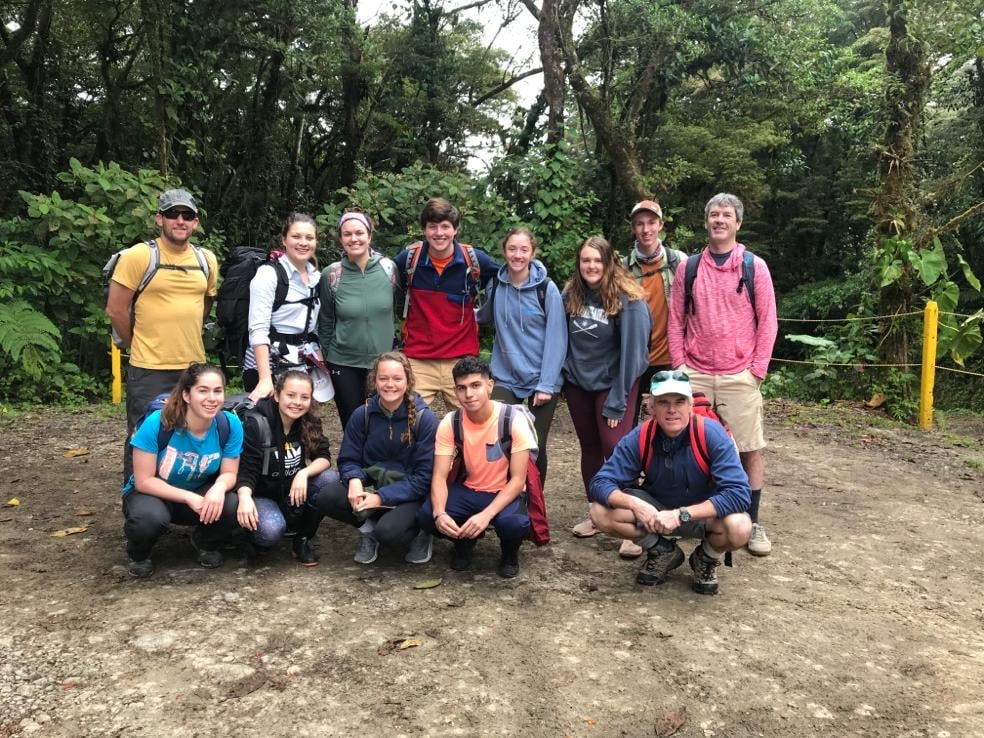 During the first weekend of February, we ventured on a journey into the forest. We went on a 3 day 2 night trip to a field station in the middle of the Children's Eternal Rainforest. The reserve got its name from an effort made by kids to raise money for buying land to protect. This incredible property and station faces the grand Arenal Volcano and lake. The lake, I may add, is a man made reservoir, with a hydro dam that fuels around 35% of Costa Rica’s power. Our journey into the reserve was filled with information brought to us by Mark Wainwright, our guide in San Gerardo. On the way to the field station, we learned a ton about the forest around us and its beauty. There was so much to take in everywhere around us. The sounds, smells, and sights exceeded my expectations. About halfway to the station we took a break at a viewpoint of the lake and volcano, we couldn’t see the top because it’s so big! Once we were at the station the real fun began! We picked our bunk rooms and admired the balcony view from hammocks. We ate our first meal there, which was so good, every meal was exceptional! Mark taught us about the importance of the forest, and amphibian decline in two different “classroom” lessons. One of the most impressive things about Mark was during a two and a half hour talk about these topics, one might think we could never hold our attention that long, but he kept every single one of us engaged the whole time. We also participated in night walks which were super cool, especially when Mark took out his ultraviolet light and made different plants and animals light up with incredible colors. Experiencing the forest alone was something I never knew could be so impactful. The moment I felt like I was lost, but knew the trail continued, was a sensation that’s indescribable.

On our final day, we did a fun art project using found materials around us. Each individual’s piece was unique, and, to me brought out what people most appreciated in the forest. For example, I created a tree by sketching the trunk out of mud and found fallen leaves to make it full and vibrant with colors, showing my interest and appreciation for the trees that create such an incredible landscape. During our time in San Gerardo, I like it’s safe to say every single one of us enjoyed learning about the cloud forest and its residence, as well as interacting with other students and staff members from both the CEC and the Institute. It was an unforgettable experience in the forest. Hey and Mark, if you're reading this, thanks again so much for teaching us so many interesting and important things! 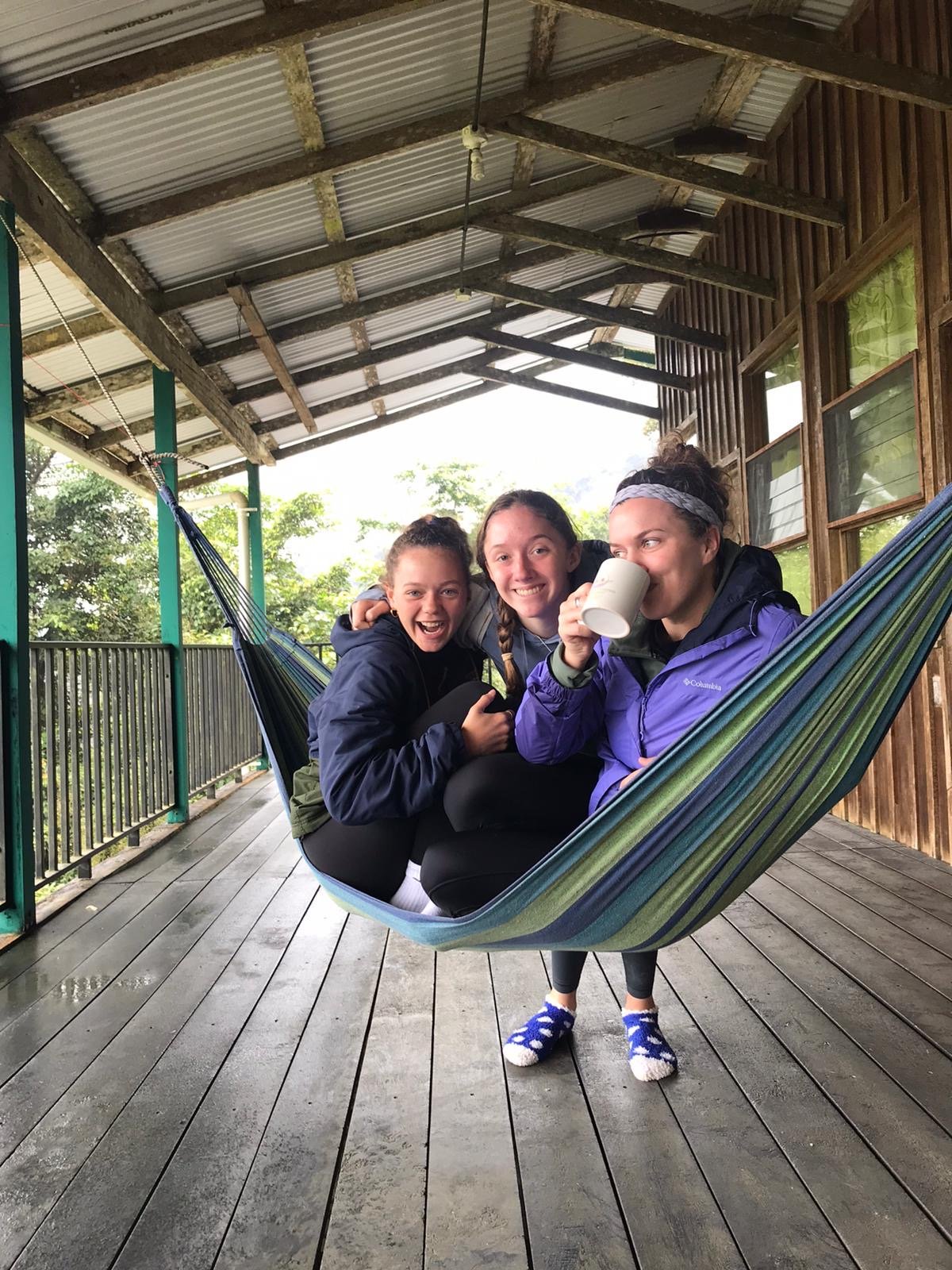 There is so much I could talk about involving this trip to San Gerado. The people I met, the two hour walks each night, the late night talks on hammocks, card games, becoming close with new people, many laughs and even the great food. Although I loved hanging out with everyone on the hammocks, it was especially nice when I was on the hammocks alone just looking out at the mountains and writing in my journal. When I was alone I surprisingly really liked It although I have never been someone who does. At home I am always surrounded by my five person family and at school all my friends in classes or in my dorm. It was interesting to see that when you are alone you are able to recap your day or think about your thoughts in more depth. It’s amazing how one simple moment you can appreciate so much more knowing it will be gone soon. I have always been someone who thinks about the future and being here in Costa Rica has helped me realize I need to live in the moment more often because my time here will be gone before I know it. I don’t think I will forget about those moments in the hammock.  I had a big fluffy blanket looking out at the sky changing colors, the clouds moving and many different birds making noises that I have never heard before. Sometimes you don’t get the chance to slow down in life and look at what is around you and this trip to San Gerado helped me do that. 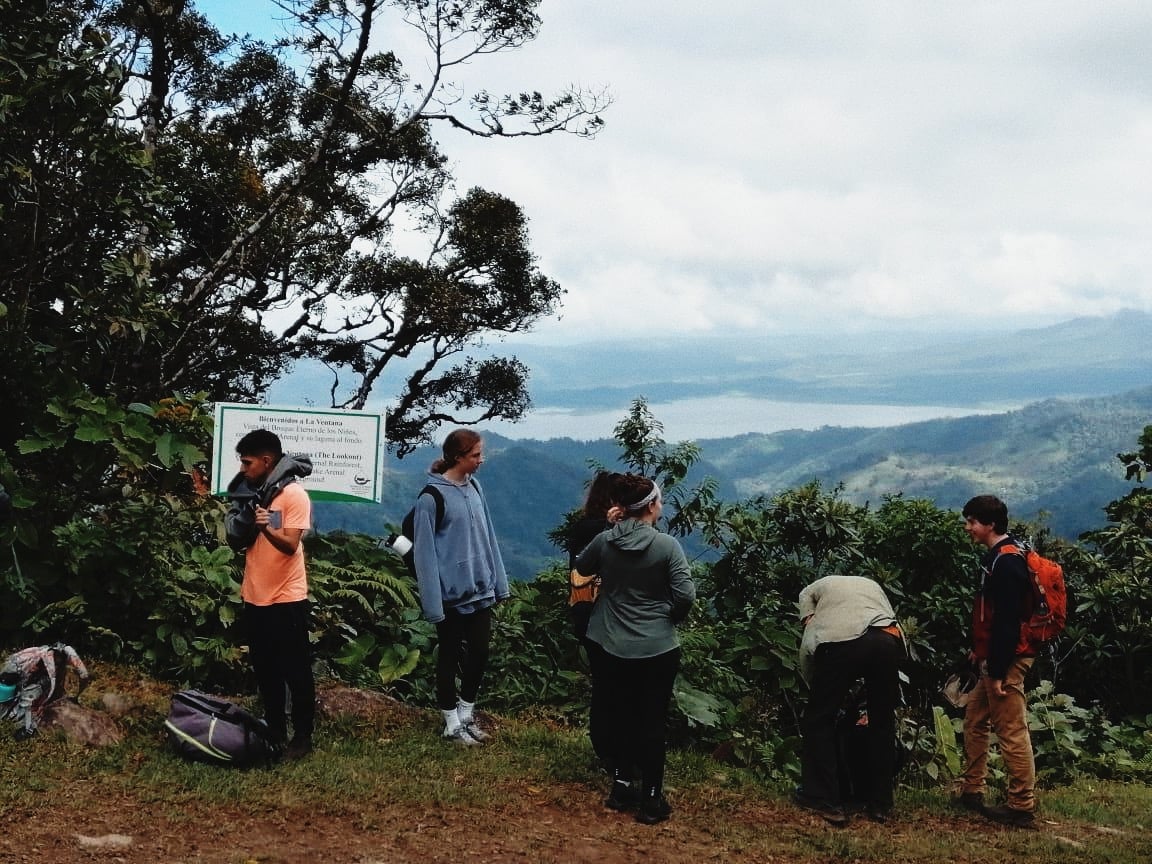 One thing that my friends and I can agree upon is that we should have stayed in San Gerardo for another week. For me, one of the best parts of the weekend was becoming closer with the local Costa Ricans that went on the trip with us. River, Justin (the Costa Rican) and I shared a bunk room together while the girls had a room to themselves. On the first night of the trip, Justin and I were in our room getting ready for bed. As I was brushing my teeth, I heard a loud buzzing noise on the other side of the wall followed by Justin saying, “Uh Patrick, I think that we have a guest with us.” There was definitely a guest all right, a giant Phoenix Moth! The biggest moth that I have ever seen in my life frantically flew around my room, looking for the light, while Justin and I freaked out. In an instant, I sprinted back to the bathroom and locked the door on myself. After about a minute, I peeked my head through the door only to see that the moth flew on to my backpack and decided to make himself comfortable there. As I was trying to figure out how to get rid of the moth, Justin came up with a genius idea, “Why don’t you just pick up your backpack and throw it outside?” Using my finger and thumb, I gingerly picked up the top of my backpack, making sure that I didn’t make any sudden moves, and I threw my bag on the porch outside my room. However, the moth still clung onto my backpack! When neither Justin nor I wanted to go near it, Crystal, the Costa Rican girl, slapped the moth, which finally convinced it to fly away. I screeched like a small child as the moth flew towards me and I gunned it for my room. When Justin and I made it safely back to our room, we sighed in relief and laughed a little. The moth incident was one of my favorite parts of the trip because I was able to connect on a personal level with someone that I didn’t know at first. Our phobia of giant moths allowed Justin and me enter the woods as strangers and exit the woods as close buddies.

Throughout the first afternoon in San Gerardo, we spent a lot of time discussing what it takes to run a reserve like The Children’s Eternal Rainforest. There was a presentation run by Mark who is one of the board members of the Children’s Eternal Rainforest. He was talking about how a private reserve is very challenging to maintain and run because of the small and unreliable amount of revenue they get. The Children’s Eternal Rainforest, for example, gets almost a third of their income from donations and another third from the government. Both of these sources of income are very unpredictable. Donations for obvious reasons, and as for the government, rules making reserves eligible to accept donations is constantly changing. When you add in all of these variables on top of the fact that The Children's Eternal Rainforest employs twenty-eight people, you can see why it is challenging for them to make due. After we had talked about the source of income for The Children's Eternal Rainforest, Mark asked a very interesting question. He asked, “Let's say you ran a small reserve and large corporations like Monsanto came to you asking to donate money to you so they could better their reputation to the public. The amount of money they were offering to donate was almost 50 times what your reserve makes in a year and the only thing they asked was that you gave them the right to say they support you. Would you accept or turn them down and why?” This question raised a big discussion between everyone. Most people said they would except, but others argued that they would want nothing to do with a company like Monsanto because Monsanto has such a negative impact on the environment. Afterward, Mark told us that this really did happen and that Monsanto had approached The Children's Eternal Rainforest and offered them a huge donation which the board voted on, resulting in a forty to one vote against accepting the donation. This surprised me because I felt like if I was running a struggling company, I would accept every donation I got, but I can understand why some people are against it. 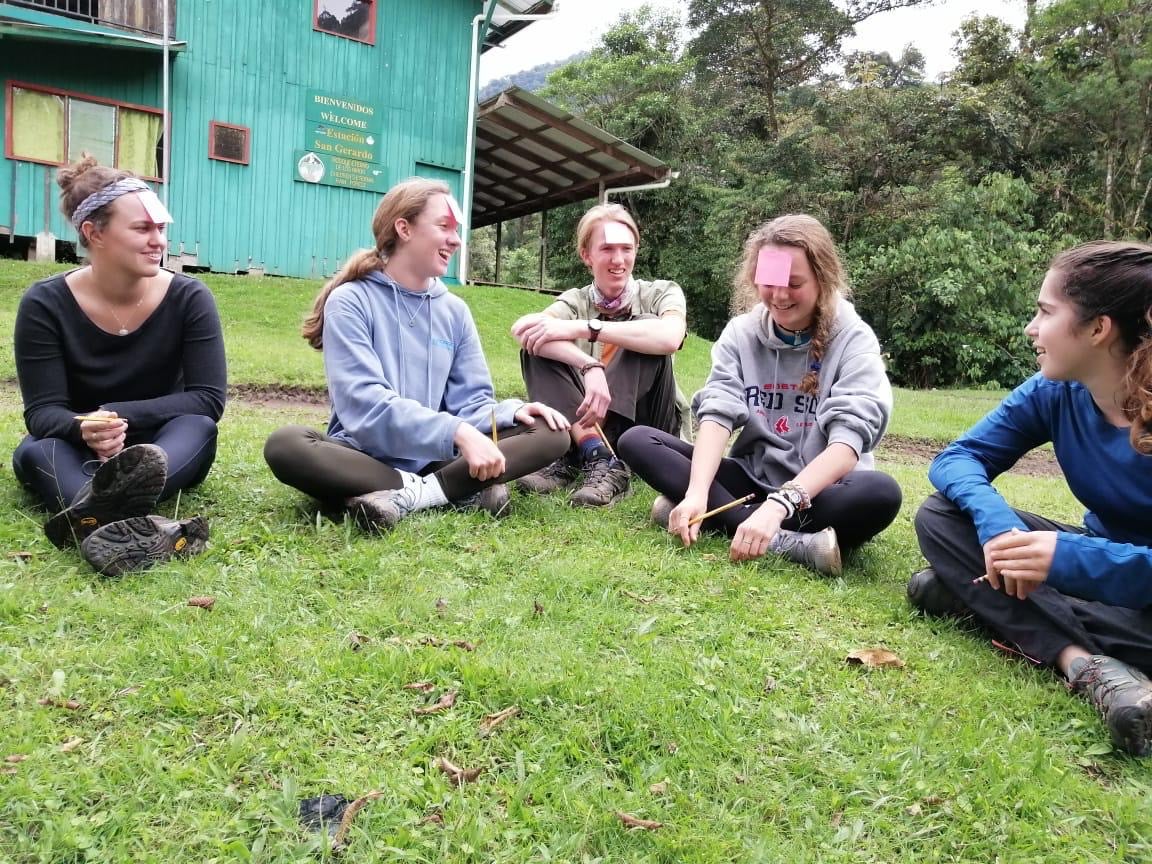 How would you feel being alone in a forest? Before last weekend, I would have just thought of it as a hypothetical activity, but during these two hours, you recognize all the constant movement that coexists within the silence. The general consensus about this experience would be the amount of knowledge I retained through my peers, through my guide Mark, and through the forest itself. I have never been a science person, and have never looked forward to going to science class each day. It would just be like any other day, you arrive to class, take out your pencil and receive a paper full of blank spaces to take notes on. There is no such thing as blank spaces in an actual rain forest. As humans, we tend to believe we are the center of the universe, but being alone in a forest especially, you feel insignificant. Every step you take there is life. Even the open trails created for people to hike all over obtain their own life on the surface. This idea of physically being surrounded by what you are being taught is in my opinion is the most influential way to be taught. Our literal walking encyclopedia of a tour guide was such a compelling teacher who gave you a reason to care about our environment. Although ashamed to say it, before this I was never intrigued by the beauty of miles and miles of trees. I was never aware of its importance. After 3 full aesthetically pleasing days and 2 wildly late nights of scary storytelling and night walks in the obscure forest, I learned how essential it is to understand how cherished all the small details are and how powerful it is to be away from civilization. I am incapable of finding the words to explain how a trip such as this can alter your perspective on just about anything at an entirely different level. I highly recommend spending time immersed in nature if you ever have the opportunity, our earth is so incredibly fascinating, cherish it while you're here!