The first week in Segovia has been a blast. Everybody is starting to become accustomed to their host families. All of the host families are filled with amazing people who are all extremely excited about the opportunity to teach American students all about the culture and lifestyle of Spaniards. 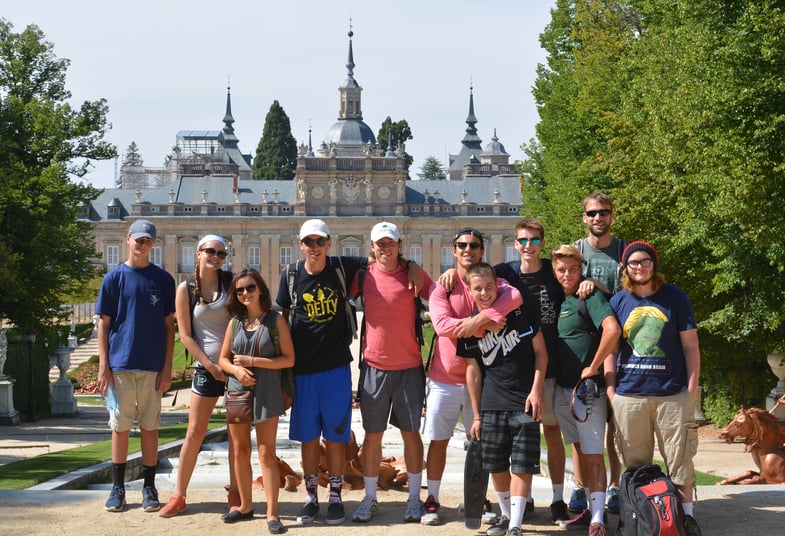 Proctor en Segovia Fall 2016 imagines what it was like to be 18th century Spanish Bourbon royalty! 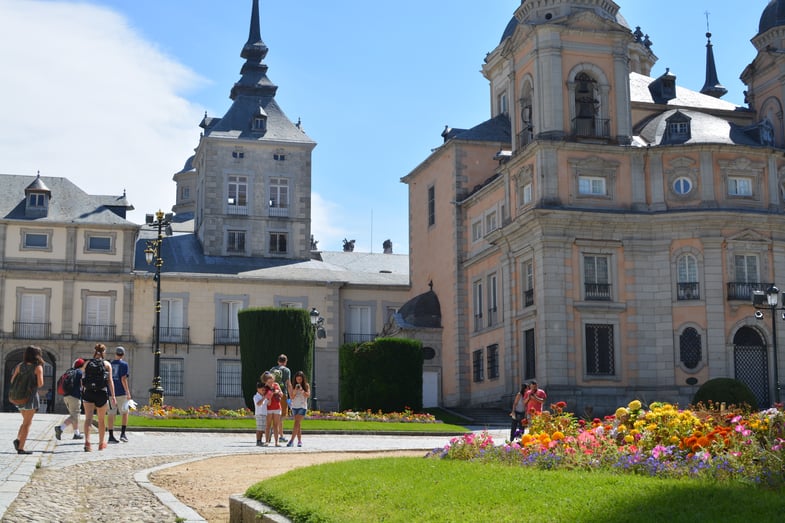 A major part of the Proctor en Segovia program is the trips we take all around Spain. For our first excursion we went to La Granja, a giant palace located in the hills outside of Segovia. Everybody had their breath taken away by how beautiful and well kept the entire palace was. We started off by walking to a little pond located a little bit away from the palace to eat our lunch. The pond was pretty, filled with fish and ducks. We had our very first history lesson here as we learned about various important figures during different points in Spain’s history. After this we took a walk through beautiful gardens to head towards the palace. 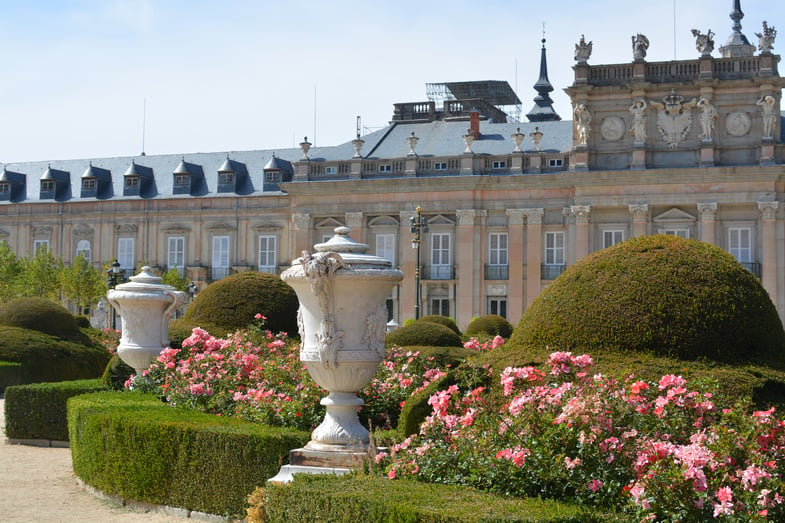 We decided to take a tour of the inside of the place to see what was inside the building’s beautiful exterior]. Inside we got to see enormous hand-sewn tapestries that must have taken years and years to make. We learned that during this time tapestries were very popular decorations as they were not only very nice looking, but they also provided insulation during the colder months. Next we went to the living quarters and saw the main bedroom. There was gold everywhere, as you would imagine, along with many old, extremely valuable paintings on the walls.

After the first week it was quite clear that we are in for an amazing term here in Segovia. The entire group is getting along great and everybody is excited to go on many adventures together!

In their first days in Segovia students get acclimated to both life with their host families and a new setting, including its trails, open spaces, and physical features like this viewpoint of the Alcázar.

Students participating in an activity that has them wander Segovia’s old quarter and begin to learn its public bus system.

And, of course, when a procession makes its way through the Plaza Mayor for a festival or event, we go to the balconies to watch!

Afternoons are filled with different activities in the city of Segovia and further afield. Here students travel to the medieval red brick castle of Turégano to take photos. (Photo credit: Phoebe Torres) And to pick up a few items of trash to contribute, in a small way, to the preservation of this beautiful monument! (Photo credit: Trixie Barker) 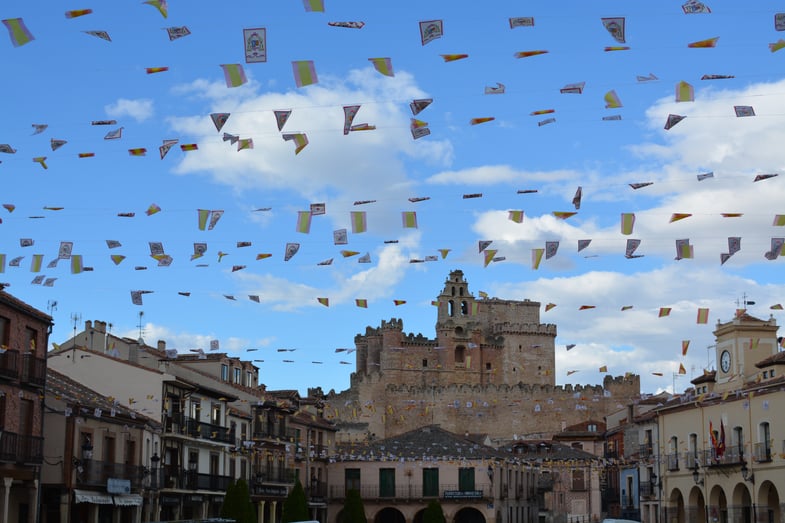 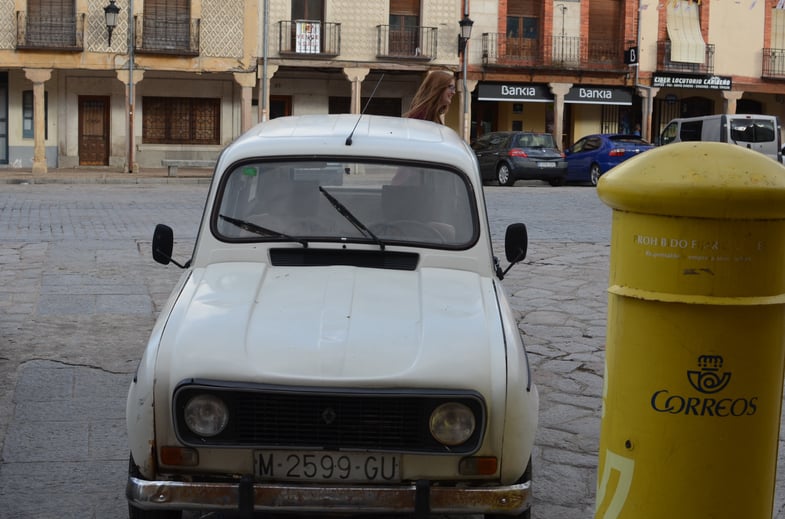 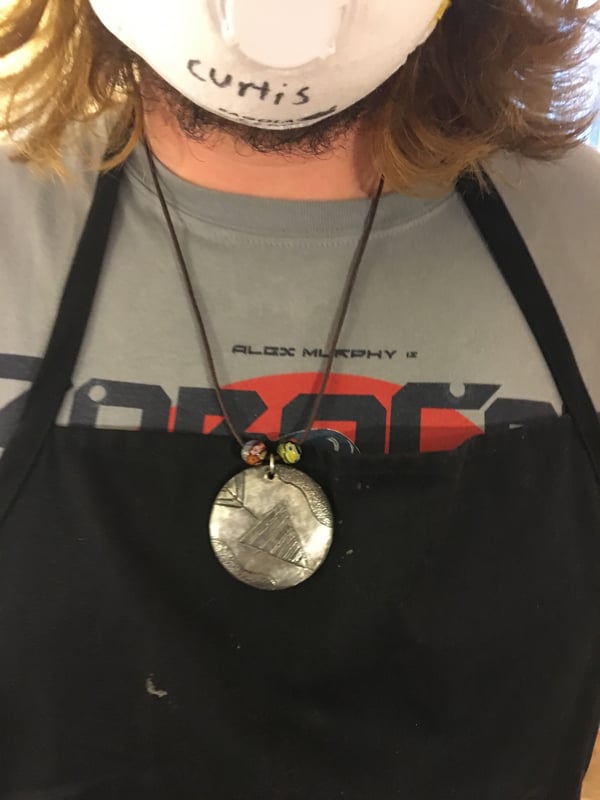 In Spain we have access to an amazing metal arts program. We learn metal engraving under Jesús. Yes his name is Jesus and he is one of the nicest people I have ever met. The first project he has you do is a medallion. I am not the best at coming up with designs, so mine is a little lackluster. I was however able to finish mine first. I must admit I wasn’t expecting much because I am used to using bigger machines. In this process there are no machines at all. It is all finesse and imagination. This allowed me to produce a beautiful medallion that I really enjoy wearing.

The other projects i hope to accomplish are a coaster and a box. If I have time, I would like to make a pen as well. The tools we use to create the designs are numerous and only used for specific things. The first day I was in Jesus’s shop he had me using one to, lightly but with force, hit the metal. This gave it an almost lizard skin look. I have done this twice, once on both sides of it, and the design pops even more. This is truly an art, and I'm very honored to be able to learn it. I managed to finish this before our weekend in the strangest townI have ever been in, Nieva. 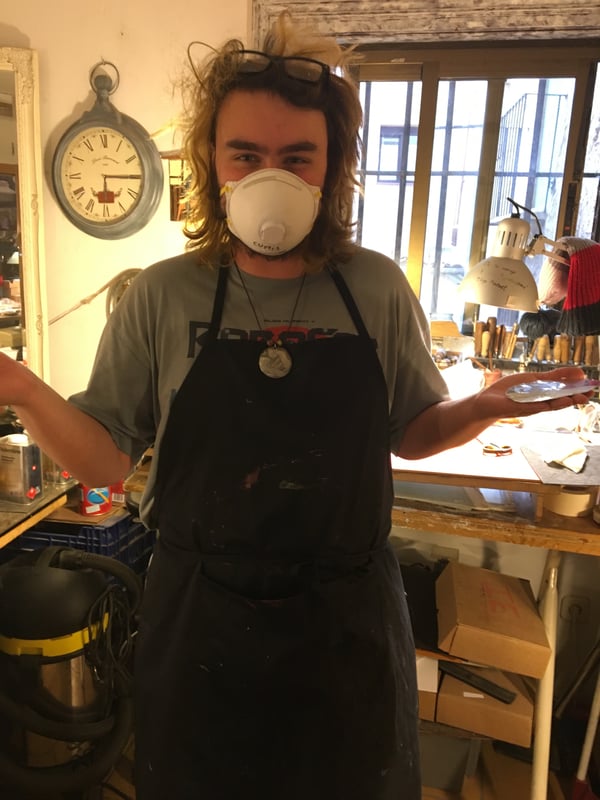 Curtis and his medallion. 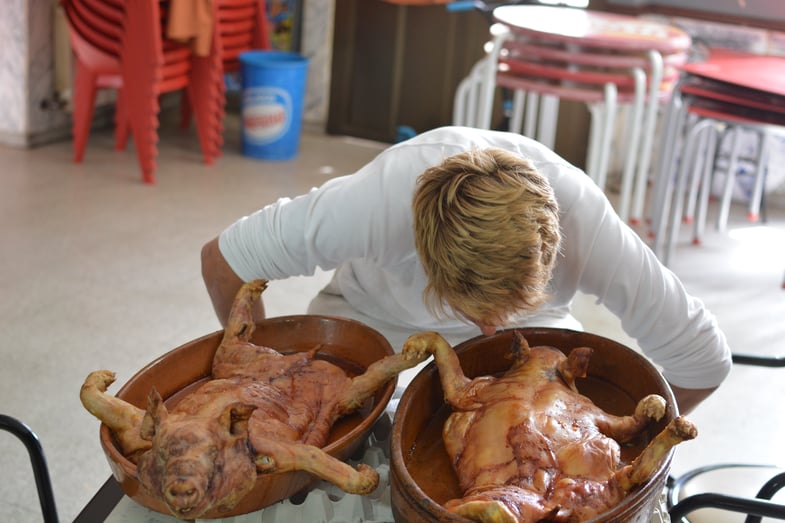 I see the color red in every place we go. It penetrates the clouds in the sunsets, seeping and bleeding into orange and purple, in the dusty adobe walls of the pueblos and in the bricks of the castle and the dry shrubbery that surrounds it. Its warmth exudes from the pinkish tiled stones and invites from the crimson flowers by the Salon + Bar in Coca.

With host mom Cristina in Coca.

As we observed the running of the bulls last night, red accompanied us as well, making itself present in the sweatshirts of the men and boys, taunting and flashing in front of huge animals; in the groups of peñas, dressed in matching sweatshirts; in the eyes of my friends as we danced and ate and weaved through the turbulent crowds, the whites of our eyes stained with the time of night making itself present. I see red in the demeanor of both the bulls and the crowds, the former in flashes of panic, anger and confusion, and the latter in shots of adrenaline, liveliness and the rush of danger that comes hand in hand with the narrow miss of horns. Red presents itself in the street signs and neon lights of the carnival where people whirl and smoke and shout and exist in the moment, and relish in the small victories, in the upward ticking numbers of an arcade game, nearing closer to 4 digits with every second. 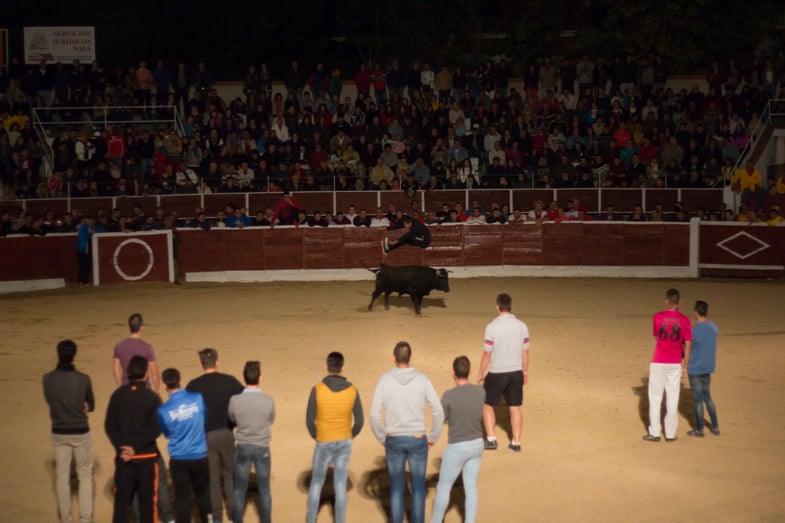 The next morning it is in the road signs, jumping out, signifying stops, turns, cautionary warnings, contrasting with the pure blue of the sky and the yellows of the fields we pass as we speed away from the weekends events and back towards Segovia, towards the city that only because we have left it we now realize it to be home. 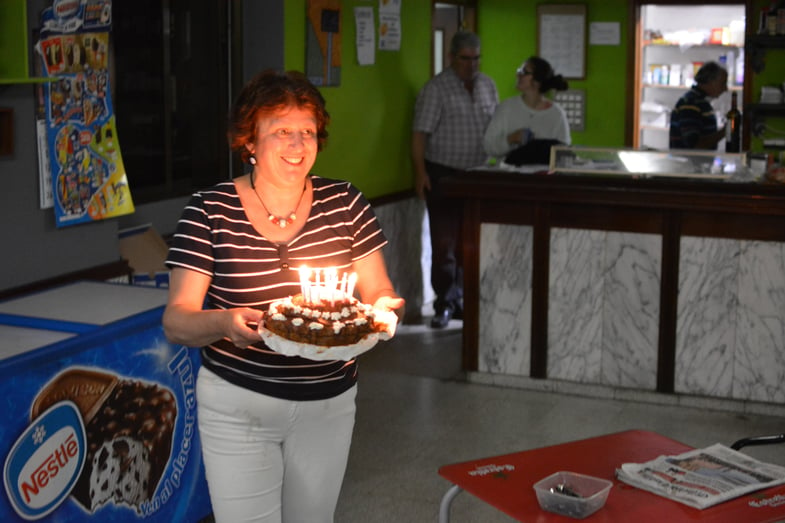 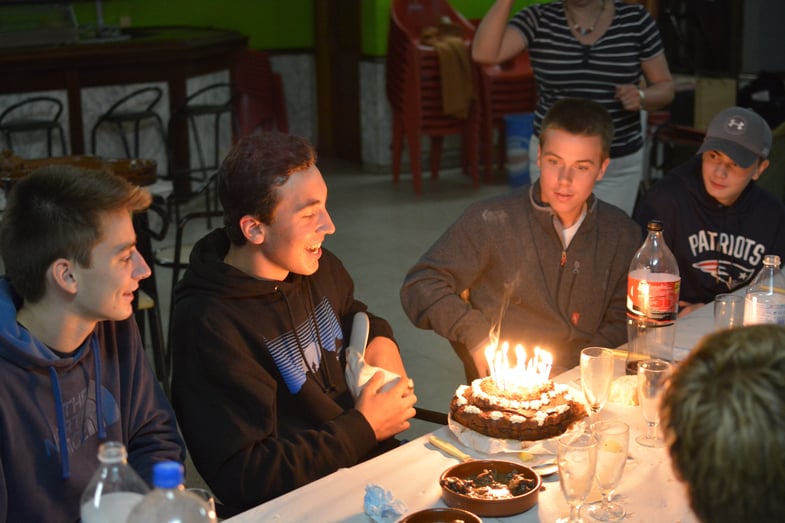