Sundays in Spain have a particular rhythm. They are largely an opportunity to find the time and space to slow down, spend time in community, and reflect on what is truly important. Eliza ’23 and Katharine ’22 write about their recent Sundays in a small town outside of Segovia and the capital city Madrid, respectively.

Proctor en Segovia Winter '22 during a hike to the source/origin of Segovia's aqueduct.

As I woke up on Sunday morning, I was hit with a wave of relief, realizing that it was noon and not 8 A.M., and that I had the whole day to do absolutely nothing. In Spain, Sunday is a day of rest for the entire country. The streets are less crowded and many shops and cafes are closed. I made my way downstairs to have my daily breakfast of coffee and toast, and was greeted by my smiling host mom, Conchi. She gushed “Buenos días!!” and told me that she was going to el pueblo for lunch and asked if I wanted to join her. She explained that my brothers and dad were already there, and I quickly agreed, excited to see the rest of my family. Sunday lunch in Spain is arguably the best meal of the week, typically an enormous feast of only the best foods. I was rather taken aback when she told me she didn’t know if I understood pueblo…one of the easiest Spanish words. Obviously I knew it meant town, and assumed that she meant a restaurant in the Plaza Mayor of Segovia, a short 15 minute walk from my home. I responded that of course I understood…

45 minutes later, we pulled into the small town of Saquillo de Cabezas in our bright blue Toyota. Conchi pointed to a bar, telling me that it was the only one in town, and that this was a “pueblo muy pequeño.” All I could think was, “What did I just get myself into? So much for laying in bed all day.” We parked the car and, all of a sudden, my small but wild dog, Tor, came sprinting at me out of nowhere. A door swung open and I was led into a beautiful house as I came to the realization that we were at the family’s home in the countryside.

My brother Alejandro quickly came to greet me and took me on a walk around the neighborhood. We winded down a long dirt road, passing soccer fields and delicate stone fountains.

As we went through the plaza and Alejandro pointed out where the DJ’s set up at the fiestas that the town often hosts in the summers. Fiestas are a huge part of Spanish culture, which they take great pride in. He also made sure to take me to see the goats, which my dog tormented to no end.

When we got back, I was whisked away by my other brother, Ruben, who took me into the village to meet his group of friends. As we sat around a little stone table eating tapas and drinking Coca Cola, the group was infatuated with me. I found myself stuck in a game of 20 questions (although there were probably closer to 50), as all of the kids tried to talk to me at once. The girls admired my long blonde hair, a rare sight in Spain. We spent the rest of the afternoon wandering the village, the dogs of the group running free through the countryside. I was taken to what I was told was “the best spot to watch the sunset,” and it was unbelievably beautiful.

As we walked around the little village, the smell of campfire lingering in the air, I felt an overwhelming sense of belonging; I truly felt at home. 7 hours later I returned to Segovia, greeted by the sight of the lighted Cathedral, exhausted but beyond grateful for my new friends and experiences.

The group posing below Segovia's Alcázar.

One of Spain’s most well known and exciting aspects is the fútbol scene. Spain hosts some of the best and most competitive fútbol teams in the world, and the leading team, Real Madrid, happens to be just a short hour bus ride from our home base here in Segovia. Real Madrid has held onto its impressive reputation and it most certainly lived up to it.

At around 5:30 on Sunday night, the group convened after a beautiful, sunny day spent with our host families and relaxing. As the sun set and excitement rose, all twelve of us loaded onto the bus and headed on our way. Enthusiasm was in the atmosphere, and we were all so eager to see what this game had in store for us. In the blink of an eye we were in Madrid, right outside of the stadium.

We were given about 90 minutes to explore the surrounding area of the Santiago Bernabéu stadium. The group split up for a bit and we took time to see everything around. The spirits were high, and those 90 minutes seemed to have flown by. As soon as it was time, Kat and I walked into the stadium and made it to our seats. Surrounded by a sea of red and white, the game began, and for, the next 90 minutes, we were completely immersed in the game and the fan culture. 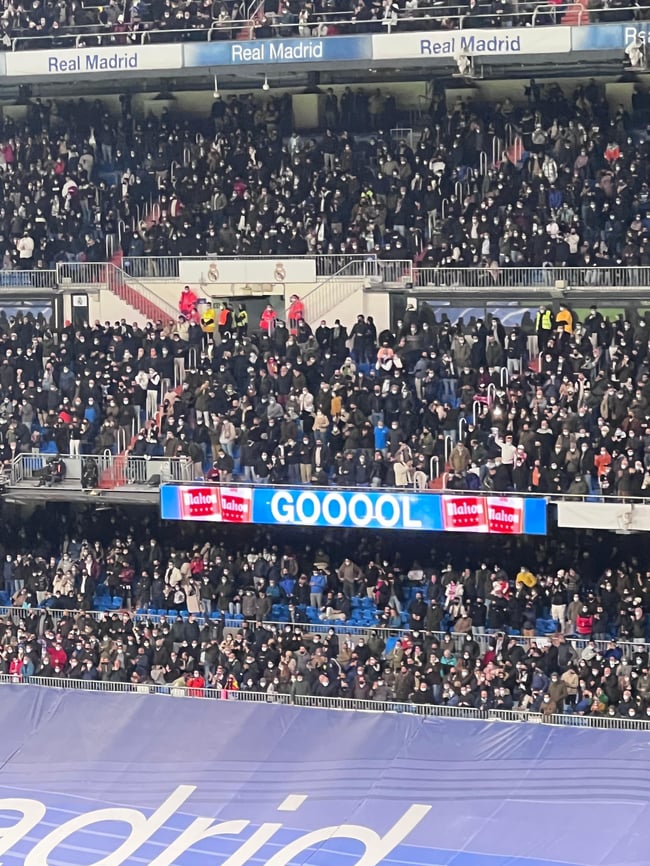 One thing I immediately noticed was the ages. There were older people, children, parents, grandparents, and just about any age you could imagine. The way that a game was able to bring together all ages and connect one another definitely stuck with me. It even was able to bring together Kat and I, who were completely unfamiliar with this scene. We talked, chanted and cheered with the people next to us, and as soon as Real Madrid scored their first and only goal against Granada, electricity was in the air. The game seemed to quickly come to an end, but Real Madrid won, and we were so happy to experience this. We all left with smiles ear to ear. 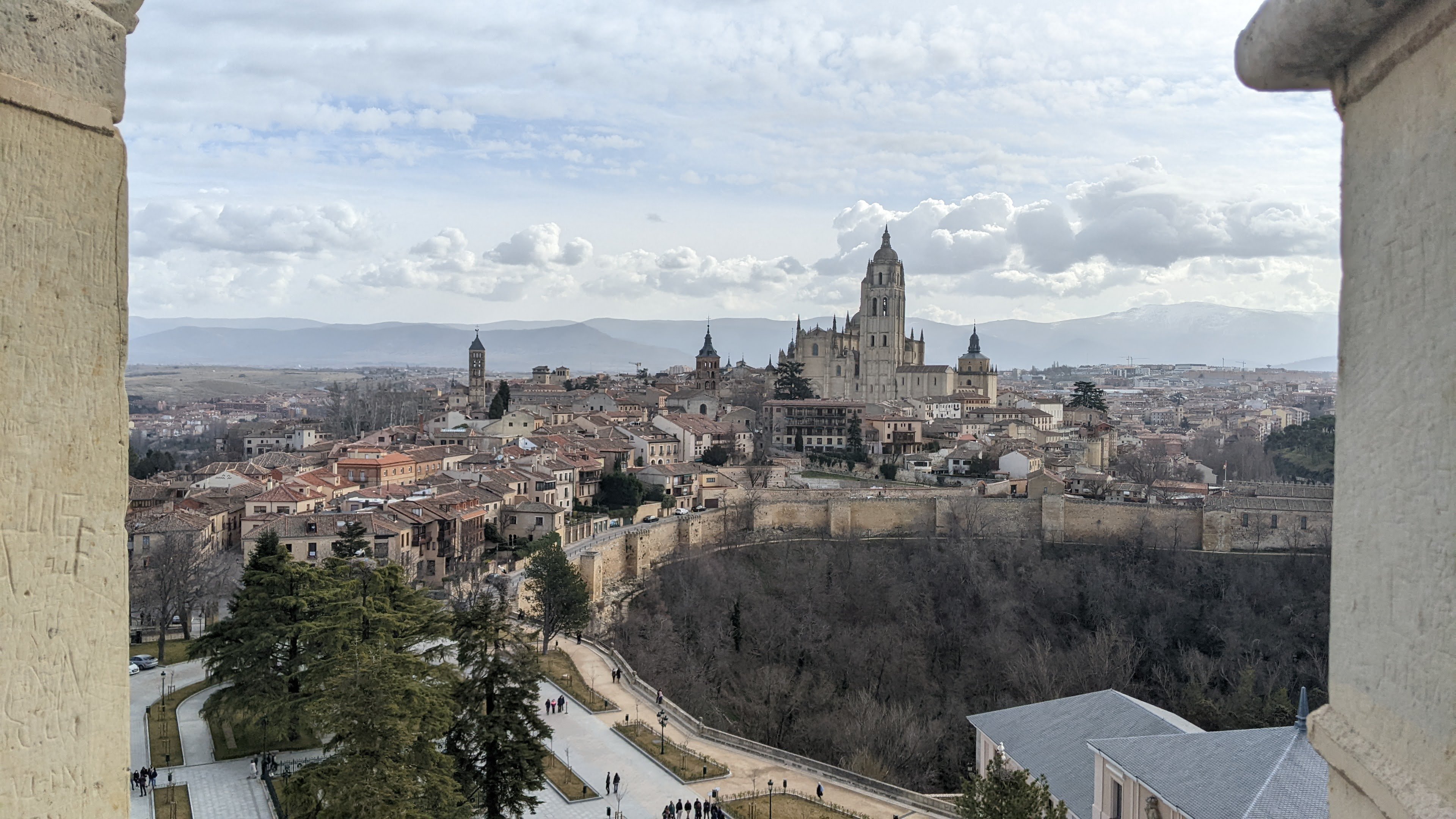 The view from the Alcázar's Torre de Juan II never gets old!