It was the beginning of a very typical week, we had just gotten back from Granada and were just getting back into our daily routine. But walking back to our homestay on that Tuesday night was different. There was an unusual sound of heavy drumming in the air and crowds were filling the street. Upon getting closer you see the hooded capes of all different sizes slowly marching up to the Cathedral walls. First you would see two lines of these figures filing up the streets with large metal staffs, followed by hooded children. Then comes the incense swinging side to side and introducing the large “float” of a religious figure. Each float comes from a church and is typically either carried or pushed throughout the narrow streets to the Cathedral in the Plaza Mayor. 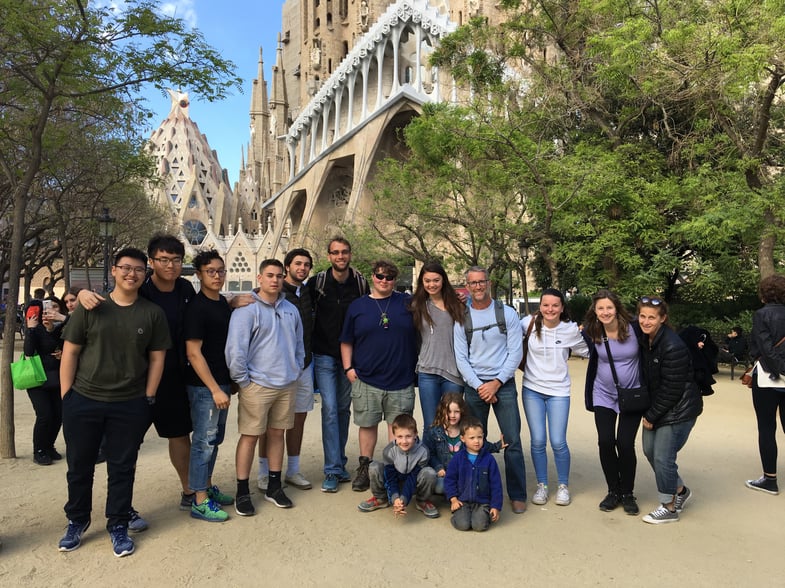 Throughout the following days more and more of these processions would march up to the Cathedral and leave their heavy floats and capes within the enormous walls. Thursdays have the most processions, and then, on Sunday, all of the church groups (cofradías) come back and the processions go from the cathedral back to the churches. 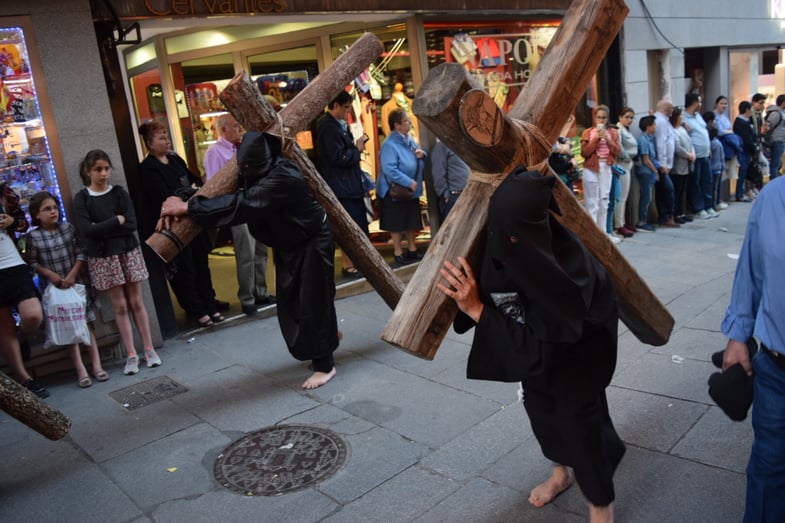 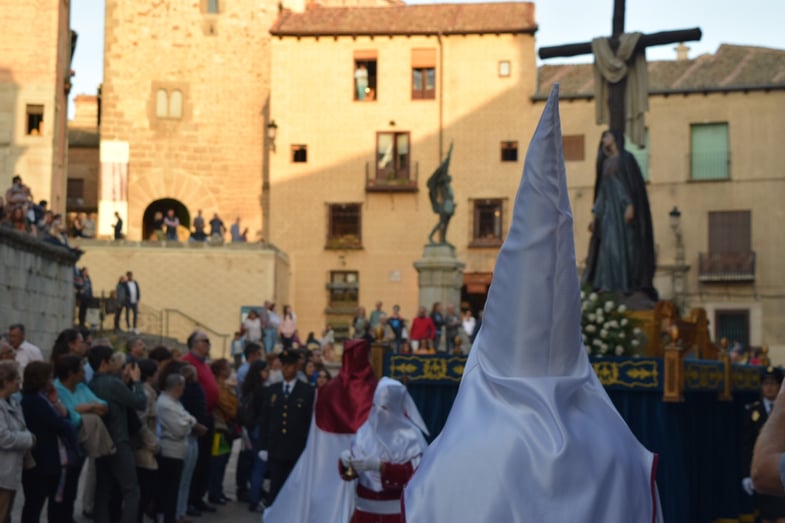 At midnight on “Maundy Thursday” (Jueves Santo) a huge procession passed under el Arco del Socorro (housing a statue of the venerated Spanish saint Virgen del Socorro) and paused for a brief reenactment of the bible before continuing on. Dressed in all black the torchlight was the only light you could see along with the bright lights of the two floats of Jesus and the Virgin Mary. 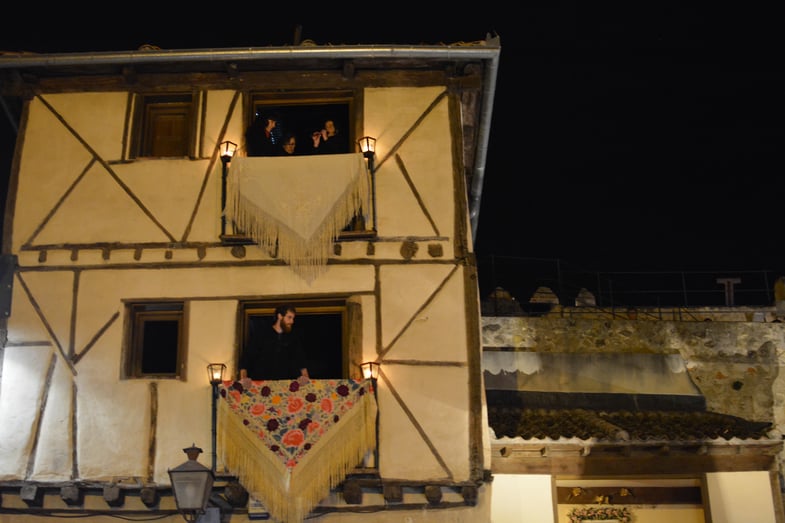 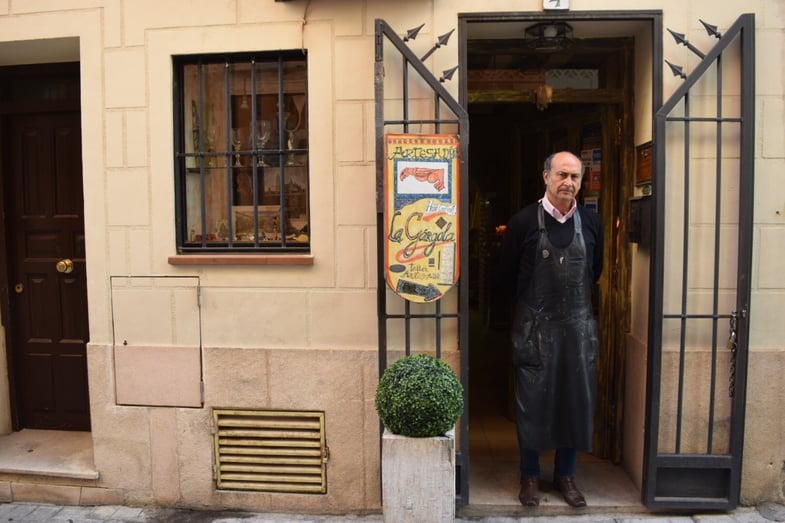 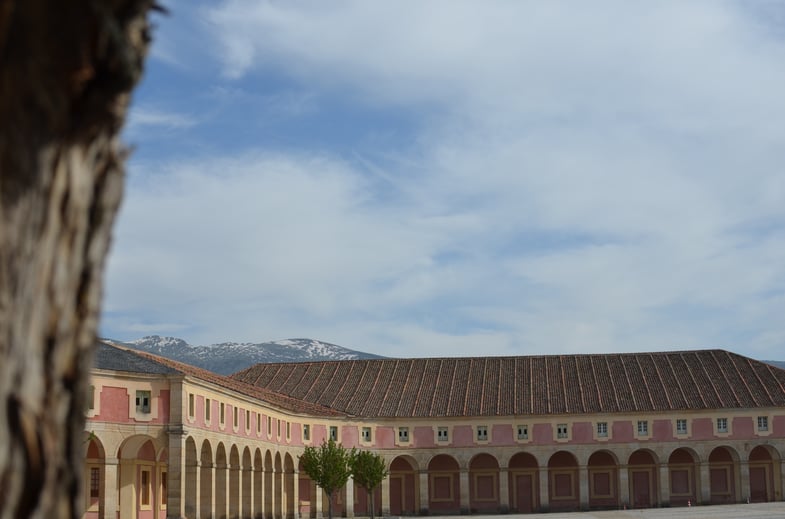 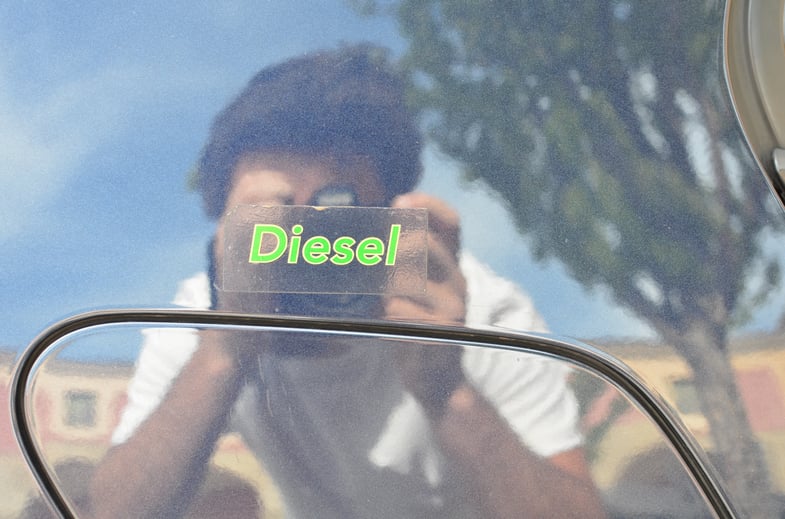 Allie, Katie and Jacob traveled to Pedraza to take photos on Good Friday.

We arrived in the center of Barcelona in the middle of the day. Exhaustion and curiosity slowly came upon the group. We had just traveled for over 4 hours and we were ready to get to our hotel and rest. Just by getting on the subway we could tell that Barcelona was very different from Segovia. The metro was packed and filled with people trying to get off and on. We were being bumped into and getting pushed by people trying to get through the sea of people. It seemed like the world had been flipped upside down. The sea of people turned into a small crowd that slowly filled the streets of Barcelona. At our hotel we got a surprise none of us ever expected. In a few minutes we were going to be leaving our hotel to go see the Kenney family who were in Barcelona for the day. The excitement made us all forget about exhaustion that just hit us. For most of us, we hadn’t seen the Kenney family in a year and seeing them felt like no time had passed. We exchanged stories about our lives and news at Proctor. They walked with us to our next attraction, which was the Sagrada Familia. We said our goodbyes and headed in our different directions. 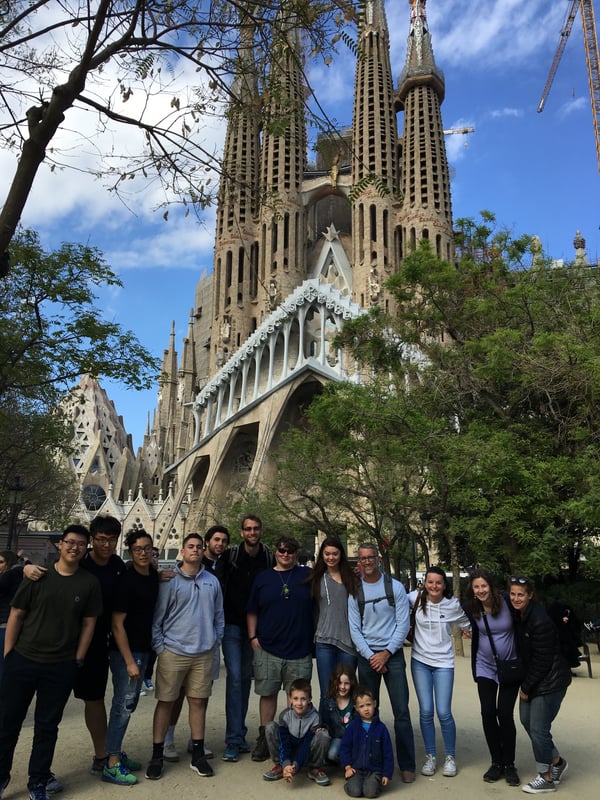 The Kenney family drove into the city to meet up with us. It was wonderful to see them!!! 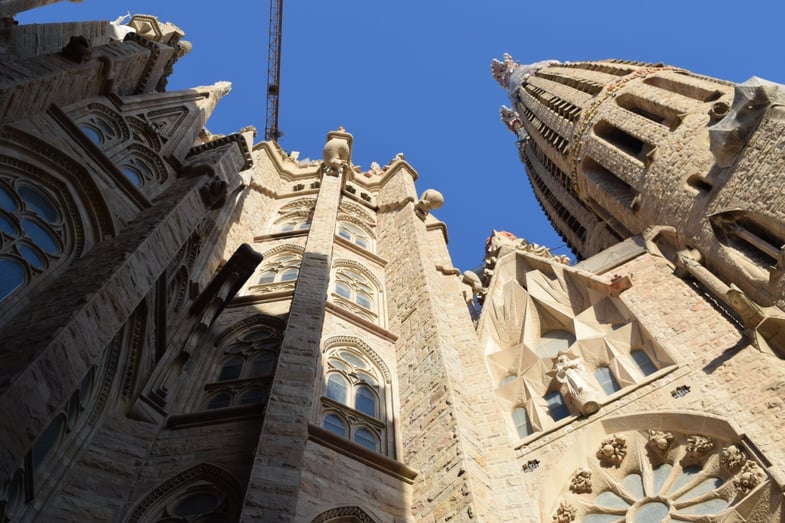 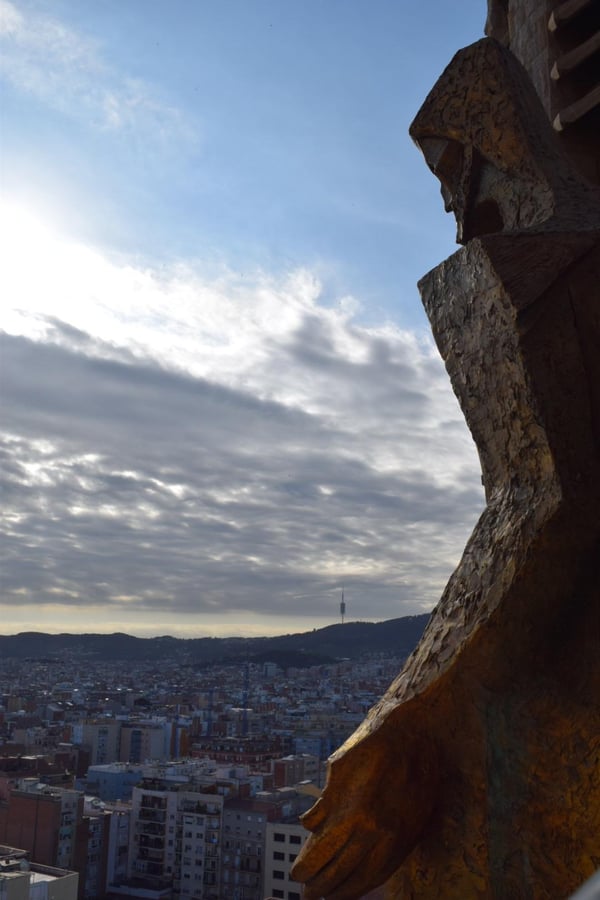 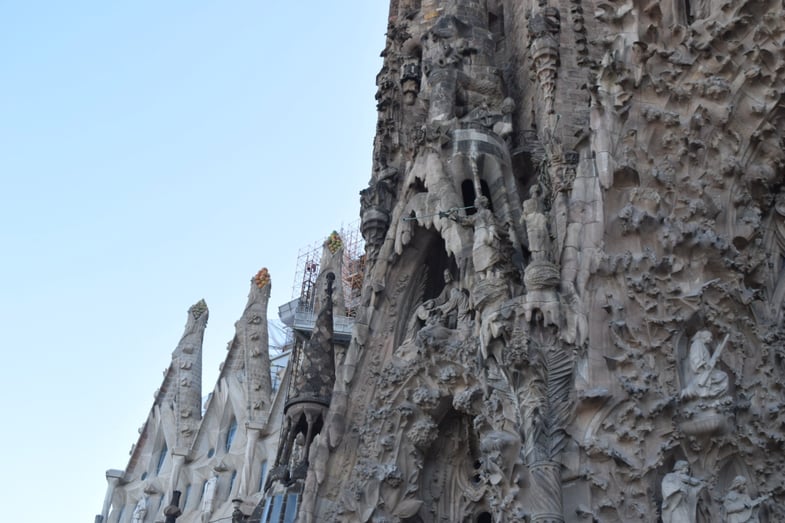 The "nativity facade," completed under Gaudí's directions, with construction cranes in the background signalling that, indeed, the basilica is still under construction. (Photo credit: Katharine Kamio)

An elevator took us to the top of the Sagrada Familia where we saw the best view of the city. You could see the center of the city and the ocean all in one view. We shuffled our way around the top and slowly made our way down the spiraling staircase. Those stairs seemed to be everyone's biggest fear of the trip. Stone spiral stairs that never seemed to end. All the way down you could hear shouts from the group saying that they were getting dizzy and thinking they were going to trip and fall down the center of the stairs. Trying to get over the dizziness and sickness of the stairs, we made our way around the church. It was breathtaking. It had so much detail and natural light that it didn’t even seem like a church. I could have spent hours in the church. Every time you looked at a window or a wall you would find a new detail that you didn’t see before.

On our second day in Barcelona we split up into smaller groups and went to another attraction in Barcelona. My group we went to the Picasso Museum and the Santa Maria del Mar church. Everyone in my group really seemed to enjoy the artwork. Santa Maria del Mar was completely different from the Sagrada Familia. The Gothic church was dark and cold. It had very little natural light and even light in general. Yet, the most impressive characteristic, very different from the Sagrada Familia, were the stained glass windows. Each window told a very detailed story of the bible.

Traces of Spain's brutal Civil War can still be seen in the shrapnel-scarred walls of this Gothic quarter plaza. 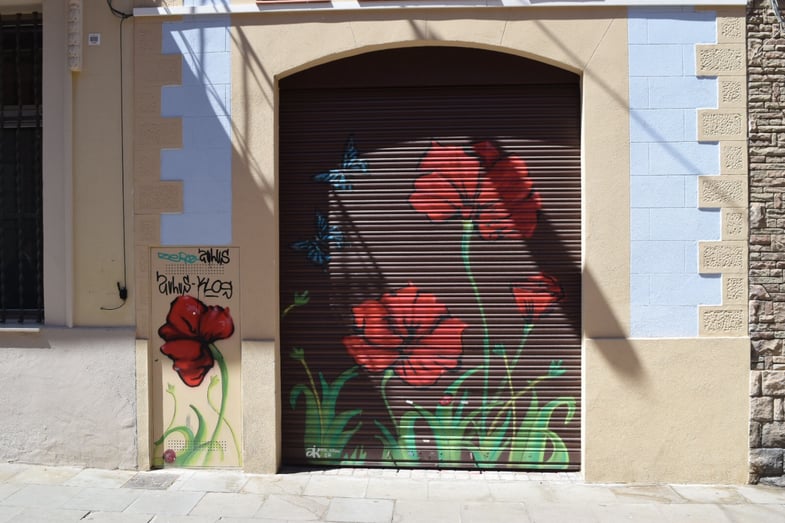 On Friday we traveled north to a rural town called Espolla (Girona Province, near the border of Catalonia and France).

Our rented house (casa rural) was part of a castle dating from the 13th century and formerly owned by a Catalan noble family. It was divided up for sale in the 18th century. (Photo credit: Katharine Kamio) 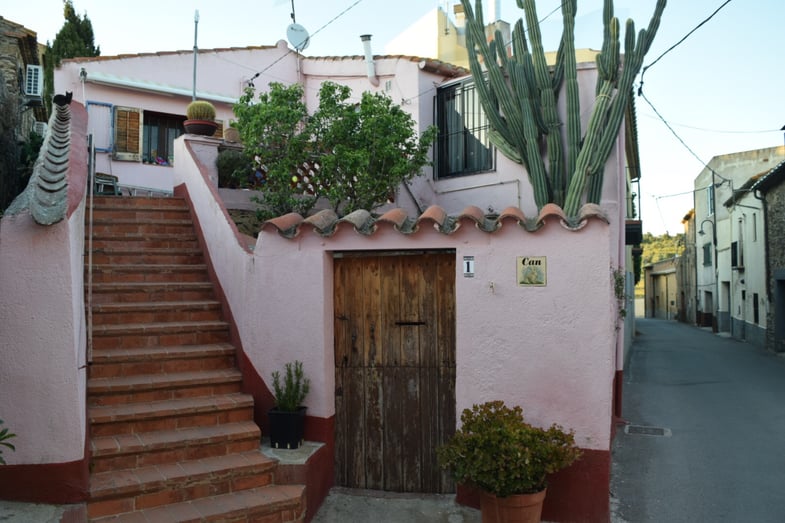 On Saturday the group took a hike along the Mediterranean Coast on a trail called the GR-92. This trail took us past beautiful beaches and along dusty hiking trails. The start of the trail took us up a large hill and then dropped us along a stone filled beach. We walked for the full thirteen miles to Roses, and the majority of the group hiked for eight miles to a gorgeous beach called Montjoi. It took a good four hours to complete our hike, but the views along the way were amazing. 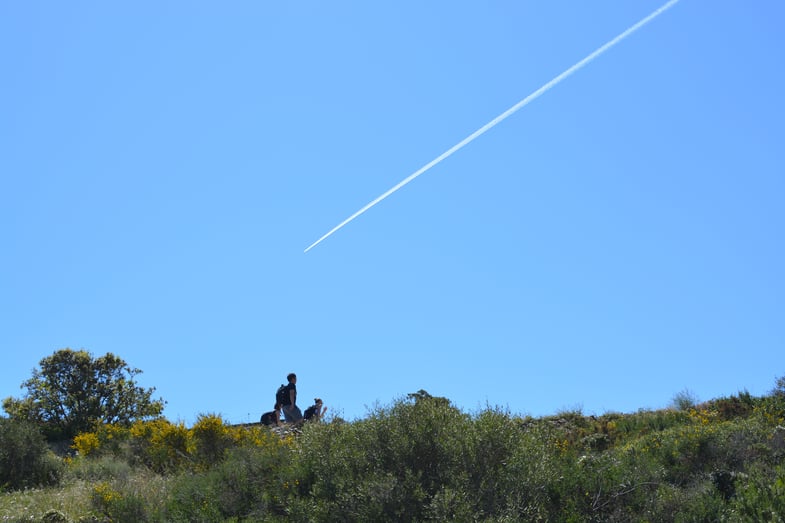 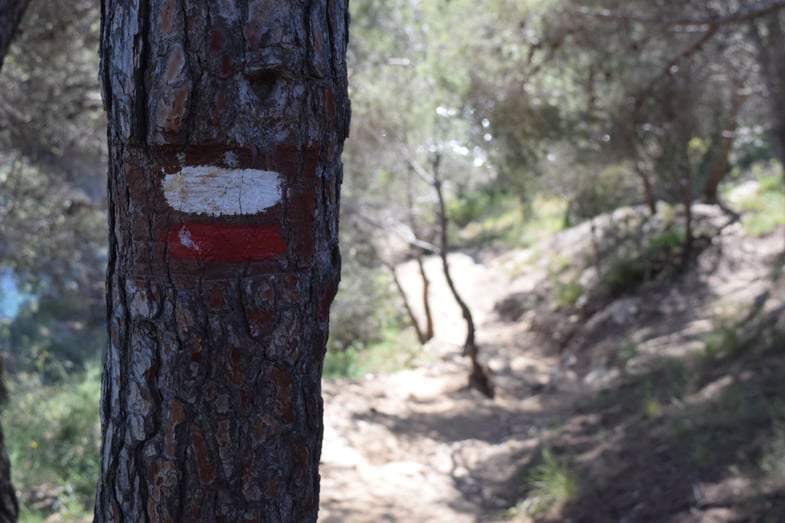