This is going to sound very cliche, but when I arrived in Spain I had no idea how deeply in love I would fall. I enjoyed visiting every city that we went to, but there was something special about Granada. Maybe it was the history, maybe the gelato, maybe it was that I felt more confident speaking Spanish. 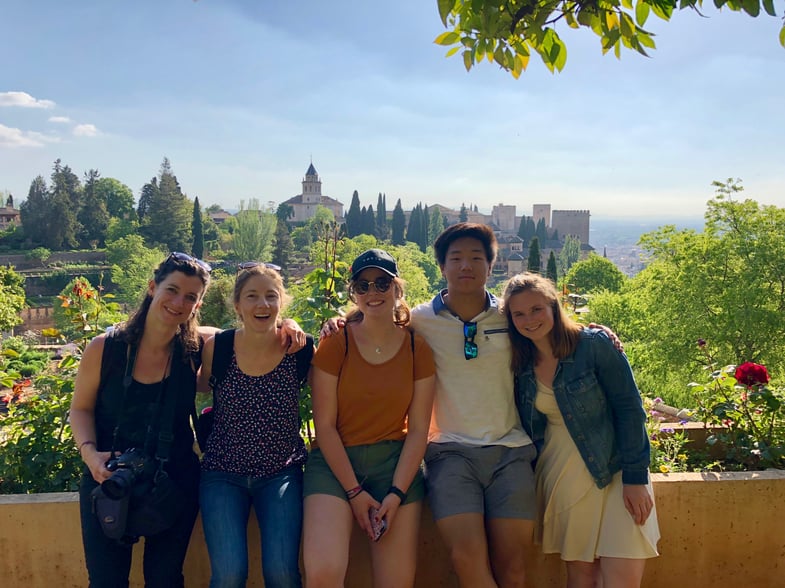 The city was in full bloom upon our arrival. Green trees, colorful flowers, bright skies and vibrant people. Constantly surrounded by people and activity, Granada’s color is shown by the local people and their energy. The city represents diversity and culture and change in social norms, “machismo es igual que terrorismo,” written in graffiti on the side of a building. This sort of peaceful example of the need for change in social constructs shows Granada’s ability to let everyone be heard. 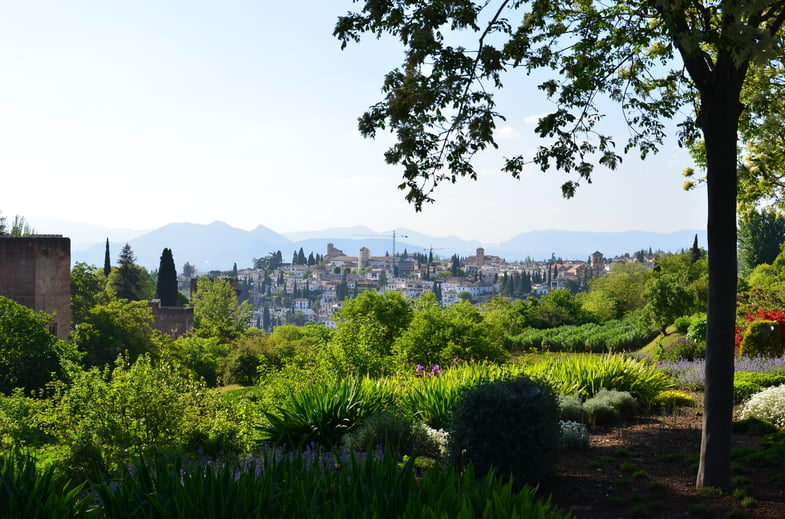 While some buildings have graffiti, others are representations of Islamic architecture. The vibrant arabesque decorations and azulejos catch the eye and appeal to many. It is fresh and intricate, twisting and turning, just how the streets in the Albaicín twist and turn. Open, cosmopolitan thinking contradicts its twisty, turn streets and walled border. 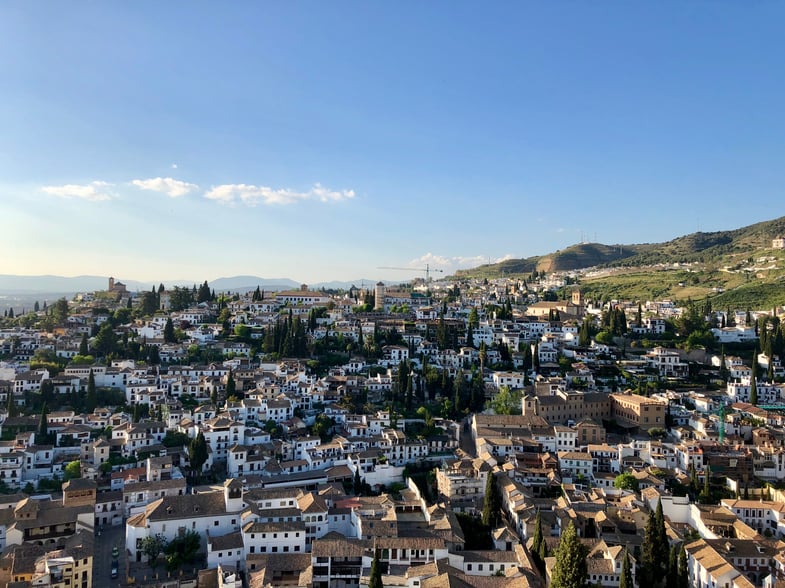 What a trip!  From almost walking 10 miles in one day (we were .2 miles away) to rescuing a woman who fell and broke her ankle from a hiking trail on a rocky bluff to visits to a “clothing optional” beach, it was an adventure. Going back to the beginning of the trip, the second I walked out my door carrying my 20 lb. backpack along with my 50 lb. duffel bag, for some reason only then did the thought pass my mind, “hey, genius, maybe you packed a little to much.” But I digress.

The travel day was normal. I managed to only trip on the protruding cobblestones about forty times before I reached the end of my street, ran into four or five people on the bus, and was already exhausted by the time I made it to Ellie's house where Ryan would pick us up. There I met Isabel. We walked up to the outside of the building at the same time, but I didn’t really put two and two together and figure out this is the girl we would be traveling with. Finally, I kind of whispered with a slight cough, “Isabel,” and it was her.

Ellie rings us in and, immediately upon getting out of the elevator, an attack dog is hollering in the apartment. When we walk in the door this little dog Thor is sprinting around the apartment while Ellie’s host mother is running after it trying to get it to quiet down. The dog was hiding under chair and tables; it looked like an episode out of Tom and Jerry. I could just imagine the little sound effects as the dog zipped around, and I got a few laughs. Ryan shows up and long story short we make it to Granada with minimal injuries (I stubbed my toe). 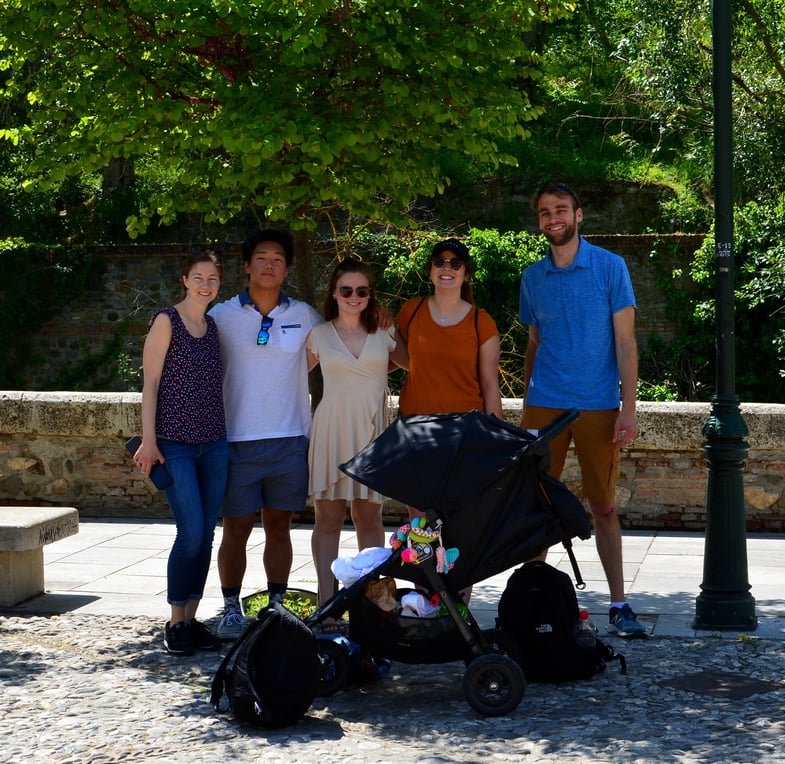 The view of Plaza Bib-Rambla (and The Alhambra beyond) from our hotel. 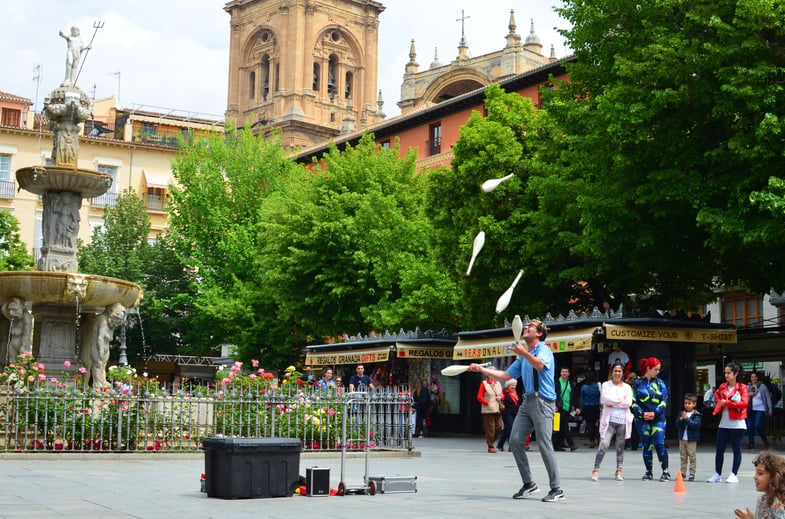 There were theater-quality street performances everywhere we turned on a Saturday, in spring, in Granda. 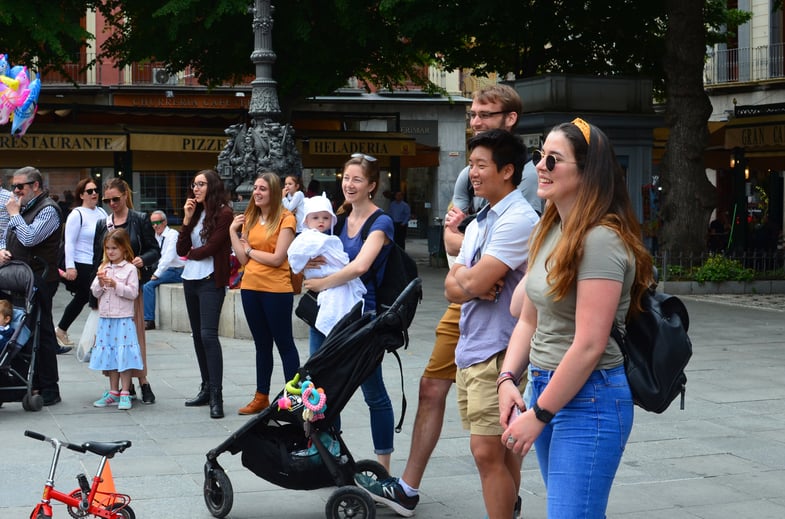 Our first full day in Granada started with (approximately) a five-mile hike straight up a hill and into the Albaicín (old quarter; former center of Muslim Granada) and Sacromonte neighborhoods. There were no relaxing bits, just a nice twenty degree incline for about five miles until we reached the Ermita de San Miguel Alto. My legs thanked me the next day, but it was worth it for the view. 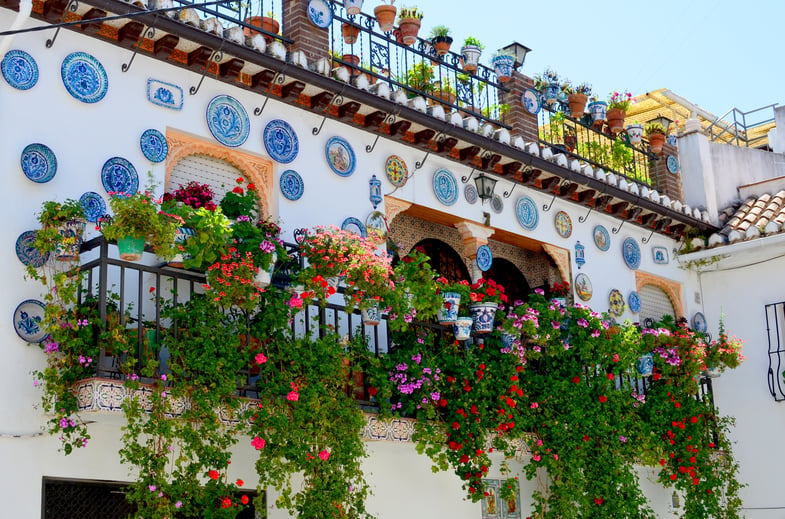 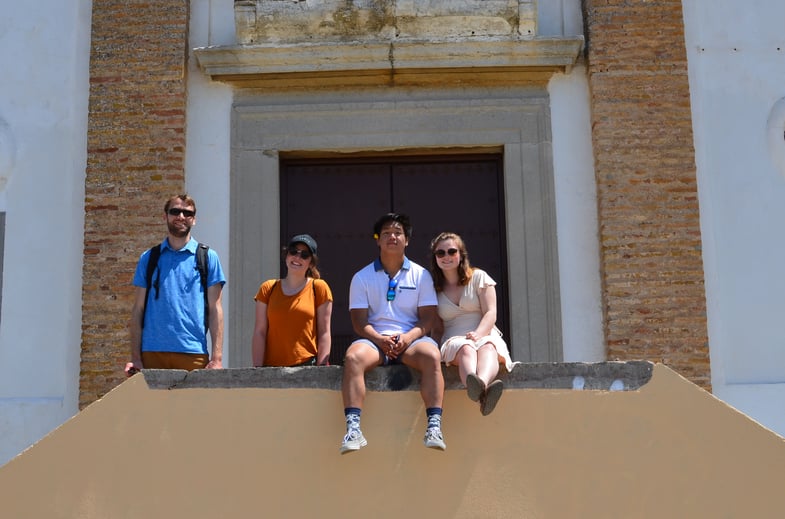 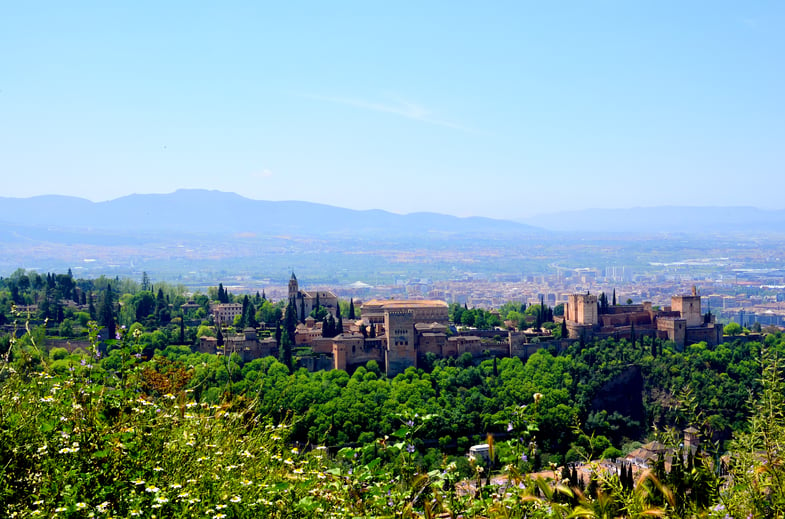 Next was the walk down. I think a mountain goat would have had some difficulties going down, but, hey, humans are designed to take punishment to their knees and back, so I felt fantastic when we made it back to the bottom. We ate lunch and, as always, I managed to go over the fifteen euro limit, but, when in Europe…

Next was the second marathon. This one was an even steeper hill to the legendary Alhambra palace complex. We made it to the top with fairly little complaining and then stopped and smelled the roses.

Once again the hike paid off and the views from the top were majestic, kind of like the unicorn that Ellie now has (I lost a bet).  We changed at the hotel that was a mix of the 16th and the 21st centuries, a bit of a strange combination, but a cool place. We went to Restaurant Oliver and had really good seafood. At the end, when the check came, there were only five of us; on this night Lucia was tired. To sum up events that followed, we think that a slightly crazy, eccentric waiter thought that Laura and Ryan were married and the parents of the three of us. Ryan is married to Mikaela and Isabel, Ellie, and I are not related at all.

With a smaller group I wonder what people think we are when we travel together. Three people who look like adults, two kids that look younger, and then me, I don’t look like anyone else on this trip; maybe they think I'm adopted. That being said, there are three adults and they all look too young to have had either Ellie or Isabel. In retrospect, I could have asked someone what they thought we were (for this blog post!). 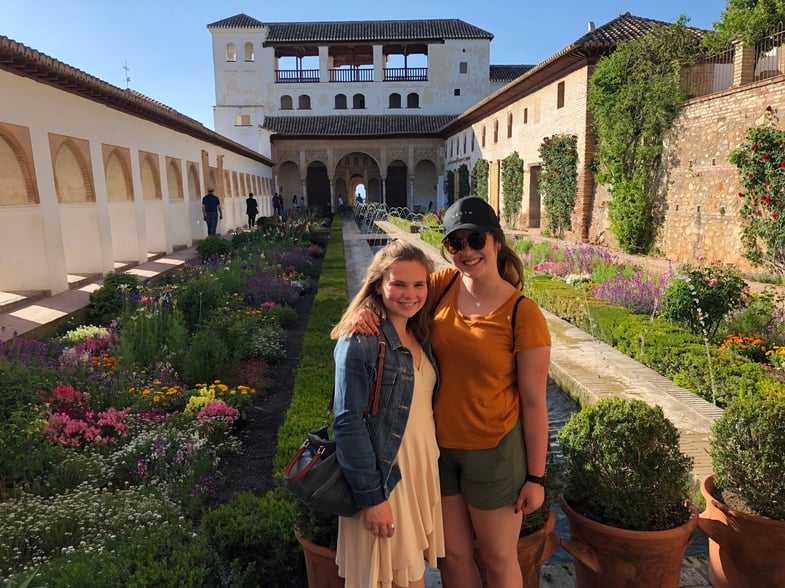 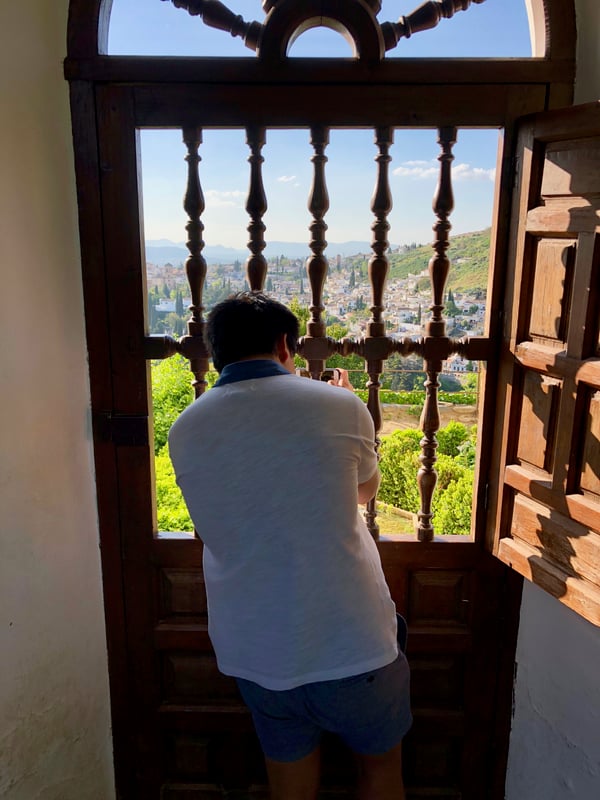 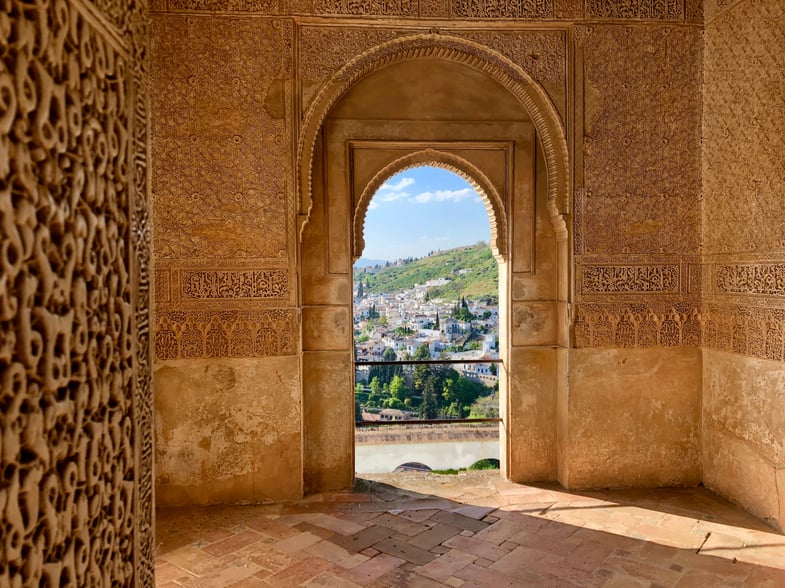 Next it was off to Cabo de Gata, we drove up a mountain to our rented house with amazing views of the town below and the Mediterranean sea. We descended to the town, got pizza, and watched a live concert, in Spanish. They were singing “Smells Like Teen Spirit,” but it sounded a little different with their accented English. We went back to the house, and I tried to convince others to play poker (to no avail). After playing some “Set” and half of a game of Parcheesi a wave of sleepiness hit the group. Probably the pizza from dinner contributed to that. 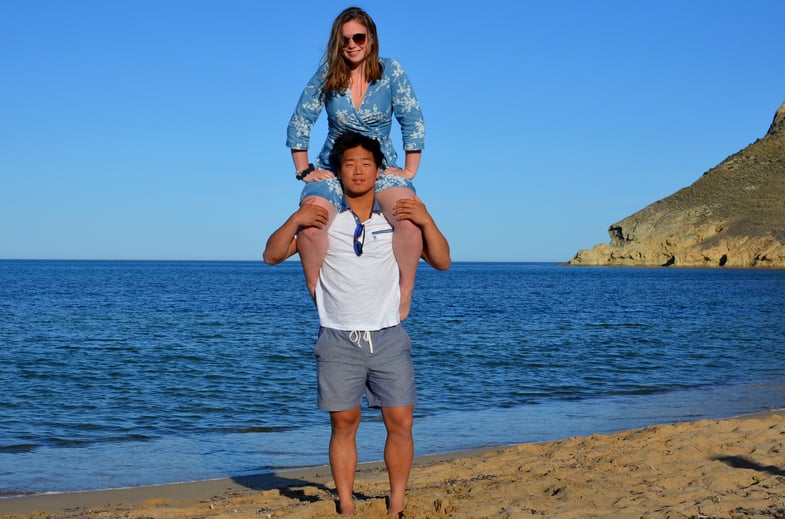 Cabo de Gata is a national park located in Almería province, in Spain’s southeast corner and is one of the regions of Europe with the least rainfall.

The next afternoon things started to get interesting. We decided to go on a nice little hike along a mountainous, rocky coastline to a secluded beach. No more than twenty minutes into the hike we encountered another group, actually a couple. They are already coming down a steep, slippery incline so we went to the right to try to evade them. The woman in front started to fall, and she tried to catch herself with her other leg. Her ankle turned under as all of her weight landed on the leg, and she let out a little cry of pain and was then upon us. Ryan and I contemplated if getting the van, carrying her down, and driving her to the hospital would be possible, but Isabel had another plan. She called 112 (911 in Spain) and they said an ambulance and the Guardia Civil (police) would be shortly on their way. 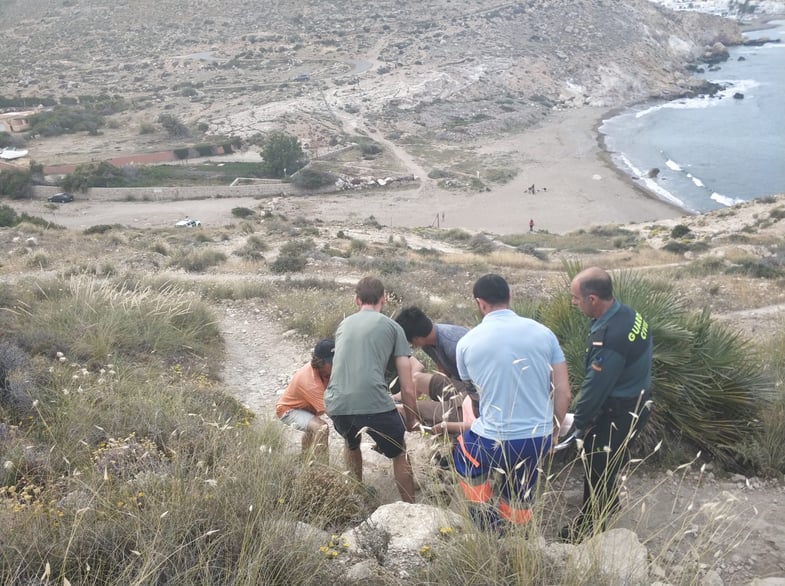 We were at least 200 meters straight uphill with large rocks and slippery gravel. Ryan and I went down the hill to flag down the ambulance and the police. They brought up braces and a backboard/stretcher. Communication was a tad difficult as the couple was German and they did not speak Spanish and only some English, but Proctor en Segovia was up to the translation task. Once the woman was on the board the descent began. Other hikers had joined the effort, so there were probably 8-12 people trying to shout orders at once and sometimes passing her down on the steepest sections! We got her down and then watched the ambulance drive off into the sunset, and headed back to our rented house. It was a long day. Back at the house we told the story, took photos by the pool, and then made a delicious dinner: croquettes and a salad with chicken. Then, of course, we ate mochi and waffles for dessert. We sat on the roof and stargazed for a little while before it was time to hit the hay. 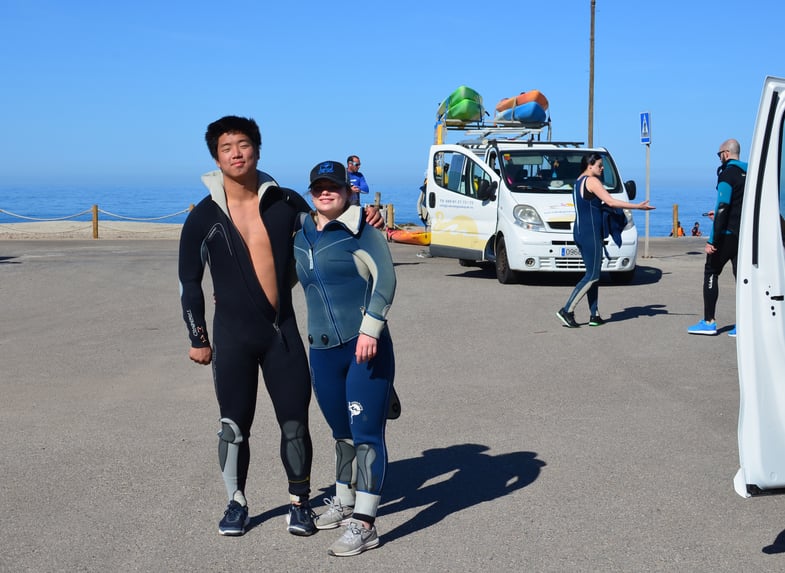 The next day we went kayaking. The water temperature wasn’t that cold, but for some reason we had to wear sneakers and a full wetsuit. There were beautiful views and our guide kept the route interesting by adding humor to the talks about the National Park and history of the area. We went snorkeling and saw some “sushi.” After our hard work, we stopped at a little restaurant and ate a lunch of fresh fish. In the late afternoon we headed off to another beach. It was another bizarre experience: a great dane the size of a miniature pony ran through our area like a bull in a china shop, another ambulance with the same paramedic arrived to help an injured person, and we came across two naked men. When we got back to the house, for what seemed like the millionth time this trip, we told Mikaela a story that was just so ridiculous it seemed almost unbelievable. 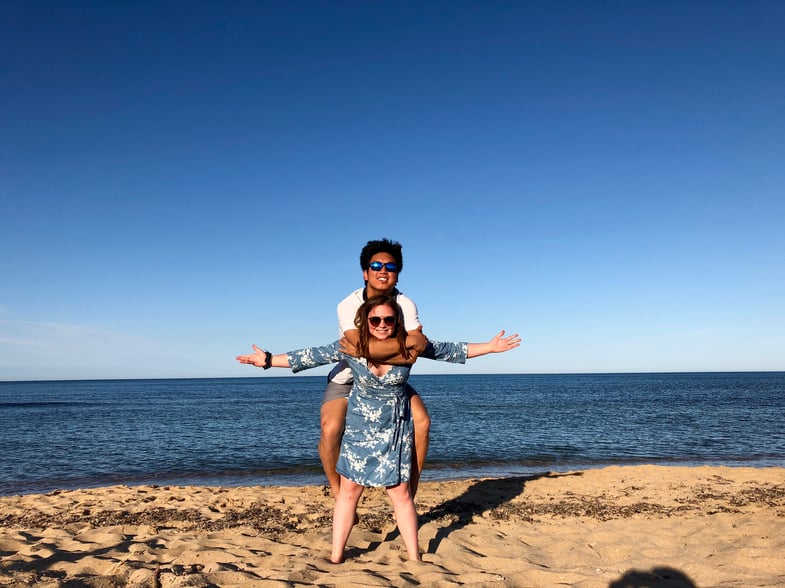 The sun retires to sleep beyond the dry mountaintops. Painted on the baby blue background the beige crayon-like paint lay, looking untouched and still. Tiny dark green specks nurture the soil beneath them adding color and texture to the matte mountains. The lumpy, curvy physiques are comparable to that of a natural, un-enhanced female body. Lying, magnificent as the light fades, drawing back from the sea that breaks the mountain range. The fresh, clear blue water dances calmly as if a slow Spanish guitar song. In and out the water rolls, constantly moving and reflecting the sky. The thin clouds hang swirling and traveling in the sky above, looking on the people who don’t realize they are moving. The white house illuminates the valley leading to the Mediterranean. The bright light bounces off the cool houses with tile floors and scenic views.

The pebbles lay under my feet as I took in the encompassing views and fresh Mediterranean air that brought peace to my soul. Witnessing beauty and feeling immersed and surrounded by it are two totally different concepts. When one is surrounded there is no other distraction, nothing else occupying one’s thoughts, nothing, purely taking in the views and the priceless earth that surrounds the human race. 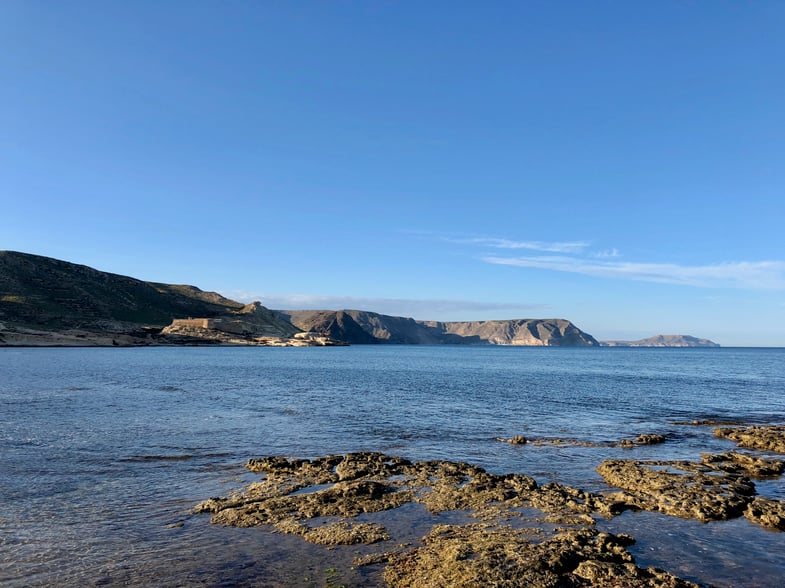