Proctor en Segovia: Desert by the Sea and Ancient Traditions in Old Castile 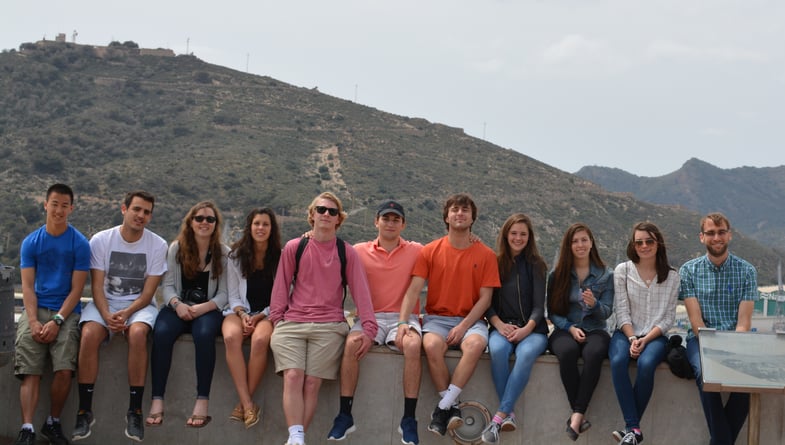 In this update from Proctor en Segovia Spring 2015, students journey along the Mediterranean coast, starting in Cartagena and ending in Málaga. On the way they experience ancient cities, Spanish Civil War fortifications, the “produce basket” of Europe, unspoiled and protected coastline, and a bustling, modern shipping and tourism hub with a Moorish past. Back in Segovia, students observe traditional Castilian Semana Santa processions. Afternoons are filled with activities in the community, metal arts classes, and (often much-needed) yoga! 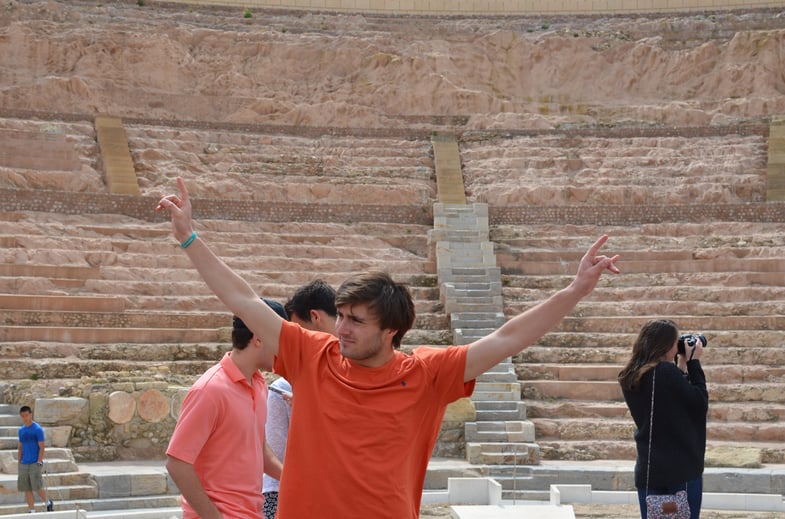 Photo credit: Maddie Lidbeck
As the train commences we are launched to a sudden start, and my heart begins to beat at an exhilarating speed. I gaze out the window only to see my surroundings moving faster than my heart was beating. I become skittish. My apprehension continues as I glance over screen that says we are traveling at 200 kilometers.

We traveled from Segovia to Madrid in less than thirty minutes. After a long, unnerving day we made it to Cartagena where we were welcomed by palm trees and gratifying weather. Cruising down the street was breathtaking. We were surrounded by oceanside balconies, fancy restaurants and plenty of people that seemed just as delighted as I was about the weather. We were exposed to aesthetically pleasing architecture throughout the whole excursion. The Cathedral in Málaga was by far the most intriguing structure I have yet to see in Spain. The gothic style church was filled with charming wooden carvings and high vaulted ceilings. The outside of the church was covered by a verdant garden in which there were statues and pieces of art relating to the church and its history. 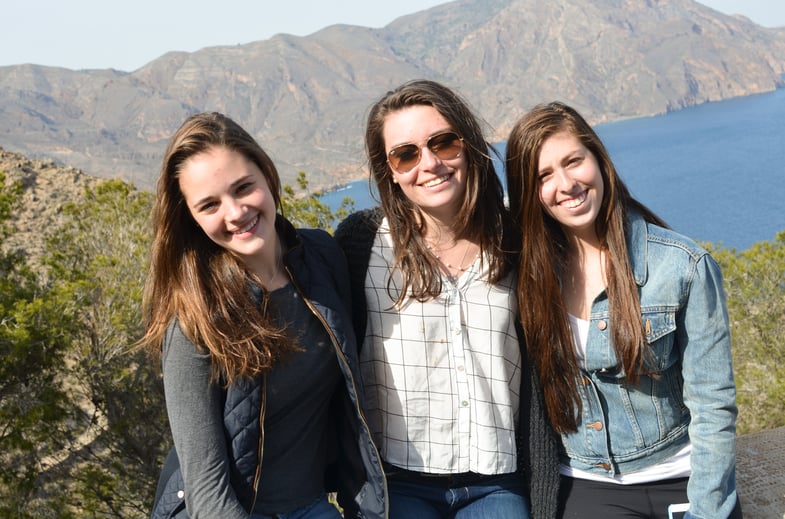 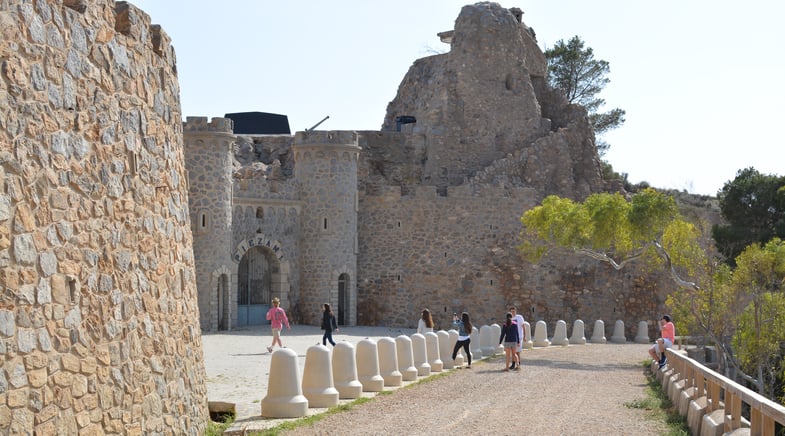 The contrast between deep Mediterranean blue and cinnamon-colored cliffs is periodically interrupted by 18th and 20th century fortresses. 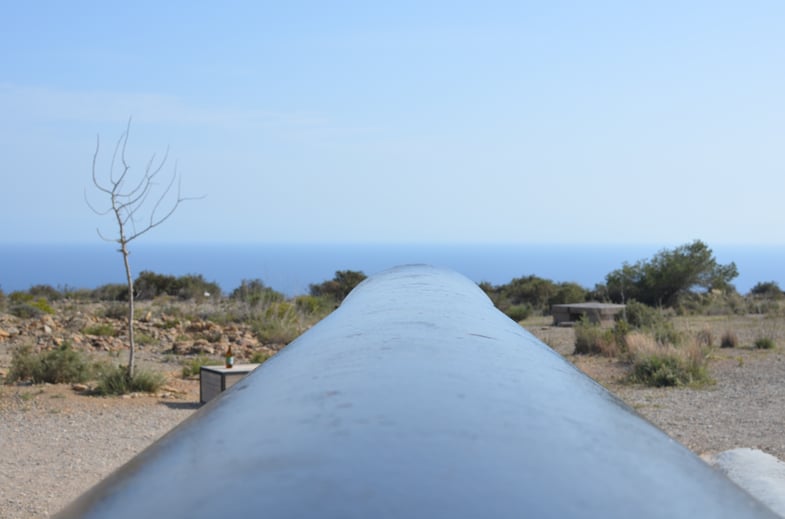 This is Batería de los Castillitos.  It is not too difficult to imagine Republican forces firing shells from these massive canons in a futile attempt to protect Cartagena’s harbor from Franco’s Nationalist forces.

The Northeast coast of New England is quite gorgeous, but for anyone who has seen the Mediterranean coast of Spain, they must know that nothing can compare. There are sheer drop off cliffs of pristine golden rock. The mountains rise immediately from the edge of the sea, grand enough to convince anyone they were sitting on the edge of world. Despite the constant wind that followed us along the eastern and southern coast of Iberia, it would be impossible to say we didn’t enjoy our time. We hiked (briefly) to a hidden beach, ate lunch on a gorgeous pebble beach and swam in the cold Mediterranean water, and explored the marble walking roads of vibrant Malaga. There are not enough words to capture our brief trip, but can easily be described as extraordinary. 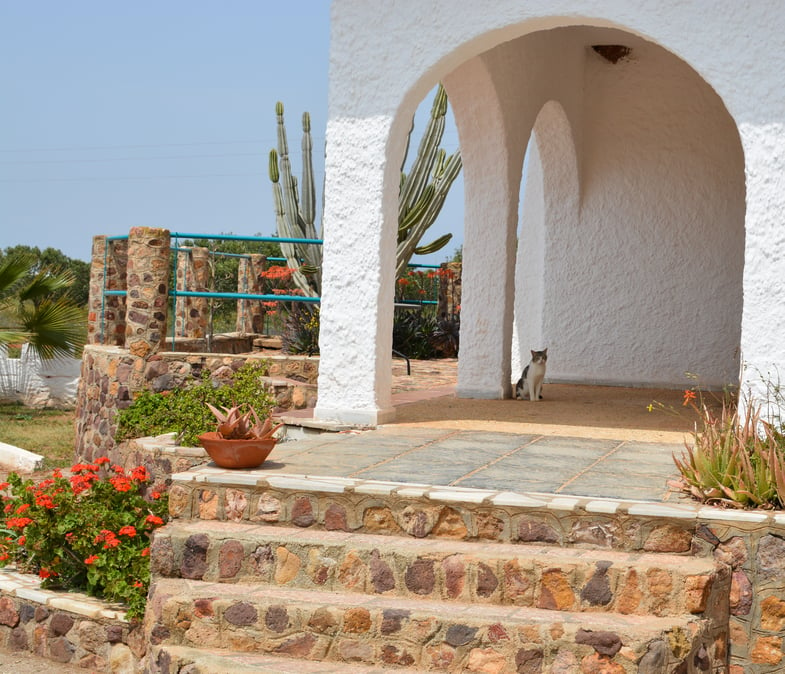 We arrive at our casa rural in Almería, Spain’s desert by the sea. 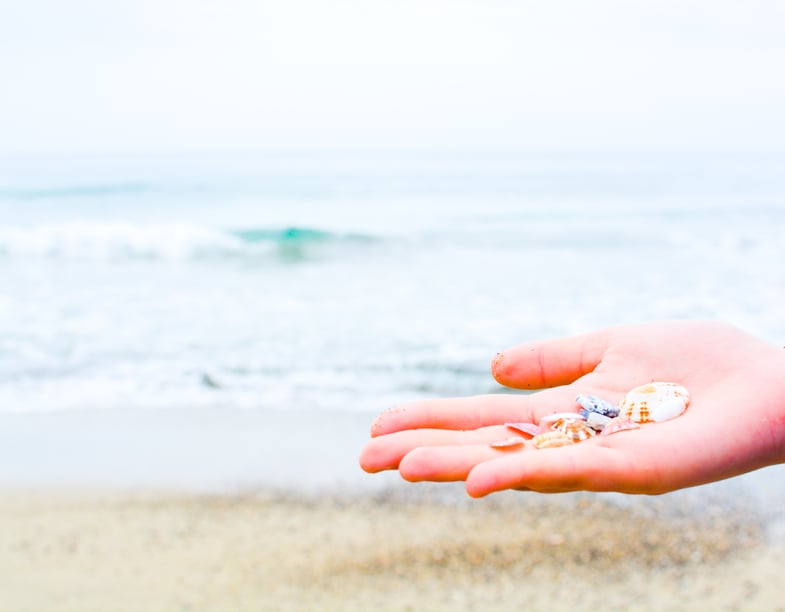 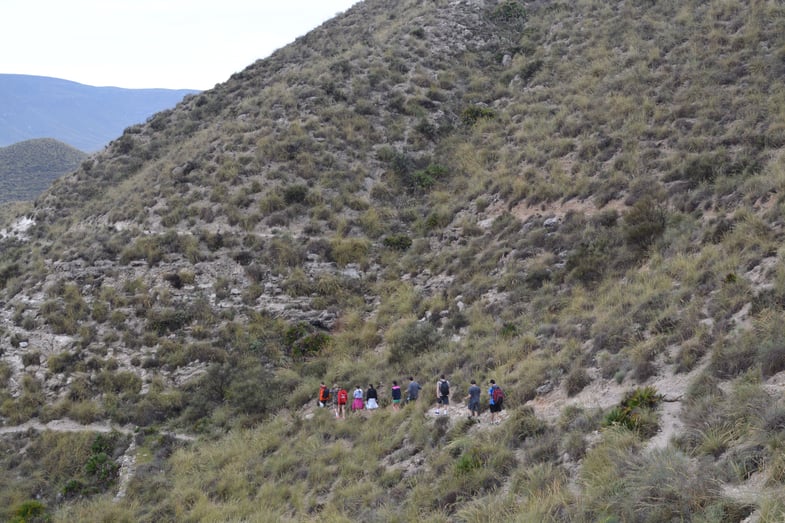 We left our house near the greenhouses and ventured further into the Natural Park, hiking along a stretch of beautiful, undeveloped coastline and finding a beach and cove all to ourselves. 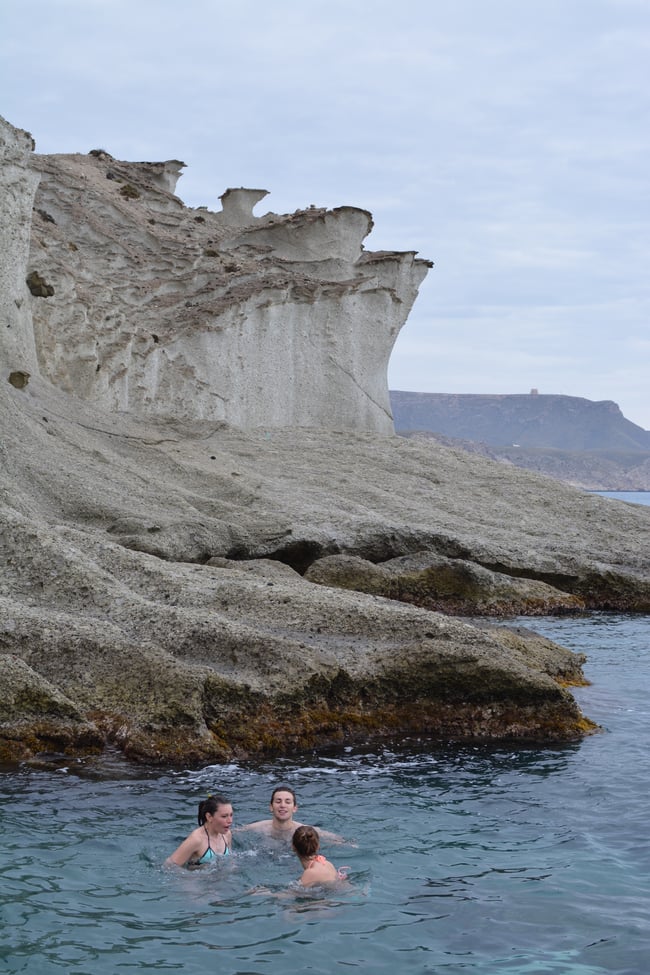 Near our casa rural we find an abandoned greenhouse.  Rudimentary plastic “greenhouses” like this cover large swaths of Almería province.  Fueled by almost constant sunshine, piped in water and diminishing aquifers, and low-cost immigrant labor, this region is known as one of the “produce baskets” of western and northern Europe.

During Segovia’s Semana Santa week the devout and nonbelievers flocked to the old quarter to watch elaborate Holy Week processions.
Semana Santa, the ‘Holy Week’ of Spain is a week of religious and cultural celebration. The vibe of the city of Segovia is one of appreciation. From our school balcony, we can watch devout members of different churches lug around 30-40 pound wooden crossed 5 or 6 feet tall, barefoot up the cold cobblestone streets. Hundreds of Segovia's people crowded the streets along the procession routes, peeking up to gain a view of the 20+ different church processions. The older, more religiously rooted men and women gazed into the beautifully lit statues of the Virgin Mary and Jesus, enamored with the processions veiled beauty. It is clear to not just us, as visitors, but also to the native Segovians that Semana Santa is something special. Proctor students watched from our school’s balconies, one of the best vantage points of Segovia’s Plaza Mayor and the Catedral de Segovia (the finishing or starting point of many processions).  Cofradías (“brotherhoods”) and other church members from all of Segovia’s parish churches participated in these processions, playing solemn music, walking in traditional dress, or even carrying wooden crosses and pushing or carrying decorated floats with religious images (wooden statues). This girl found her own perfect viewpoint.
During this time back home (holy week) I would attend holy week services and go to church starting on Palm Sunday. Holy week back home was important to many but mainly those who attend our small church. The Semana Santa week here was exceptionally profound, and the numerous processions were breathtaking. Throughout the crowd there was a sense somberness and heartfelt emotion; many of the processions were very impactful.

In between processions some students cooked dinner! 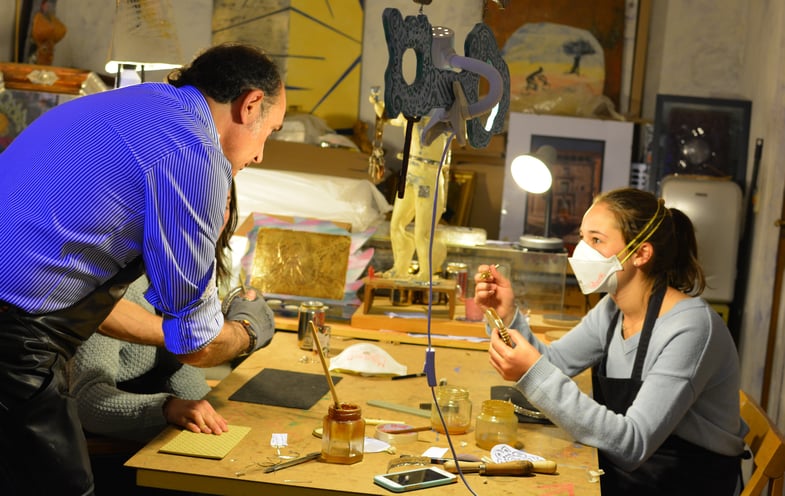 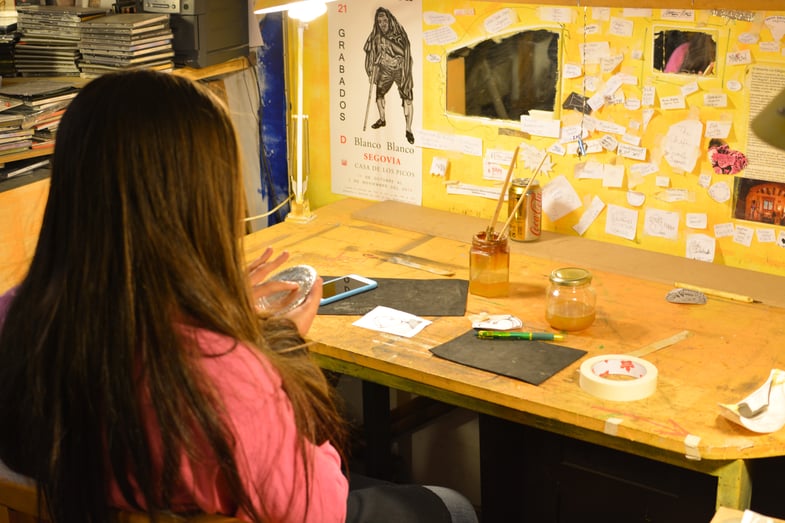 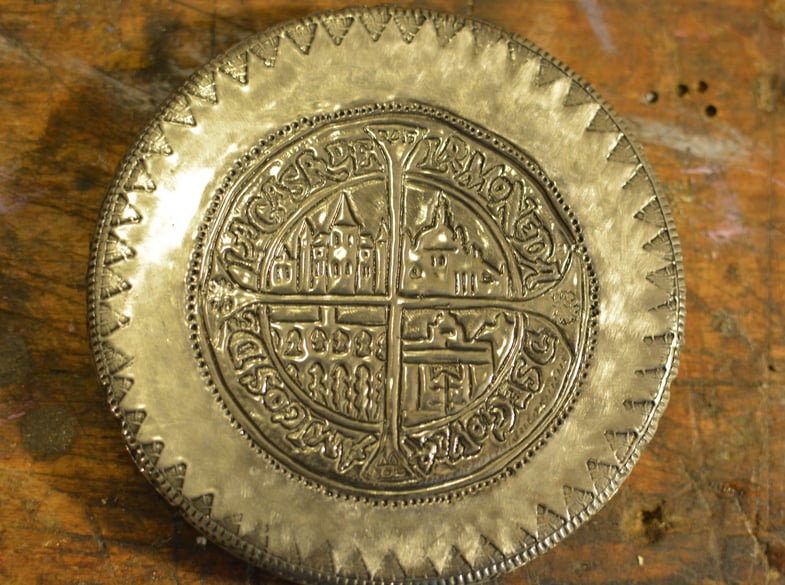 This spring students are creating coins with unique designs in honor of Segovia’s Royal Mint, the first mechanized mint in Spain and one of the oldest in all of Europe, built during the reign of Felipe II in the late 16th century. 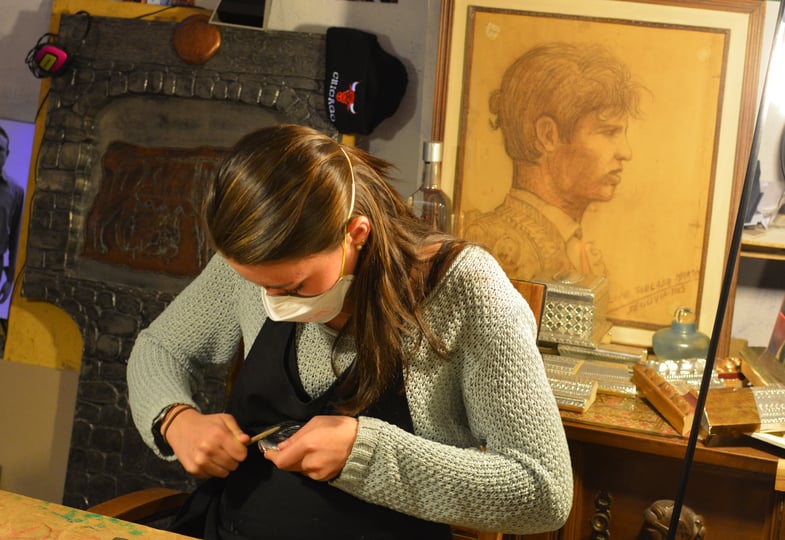 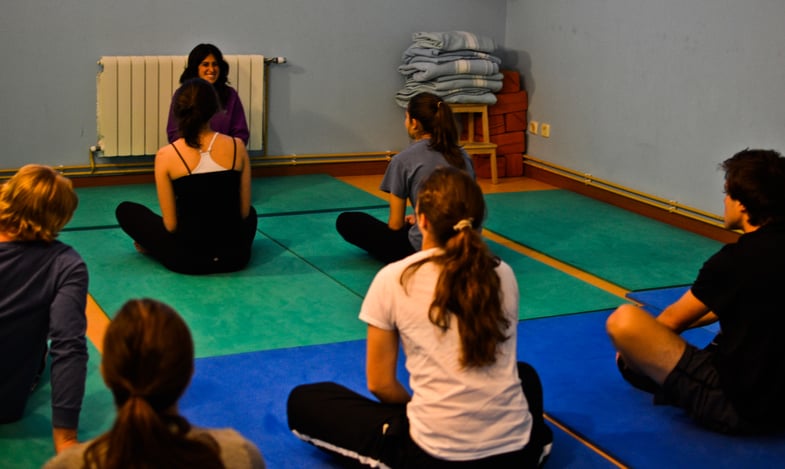 Once per week the entire group does yoga. In addition to excellent practice of body part vocabulary and movement verbs, it is an important time to relax and reflect on the week. 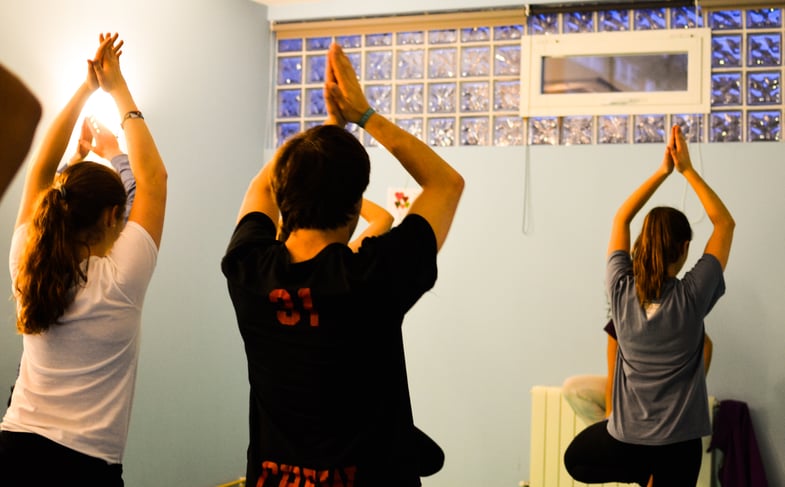 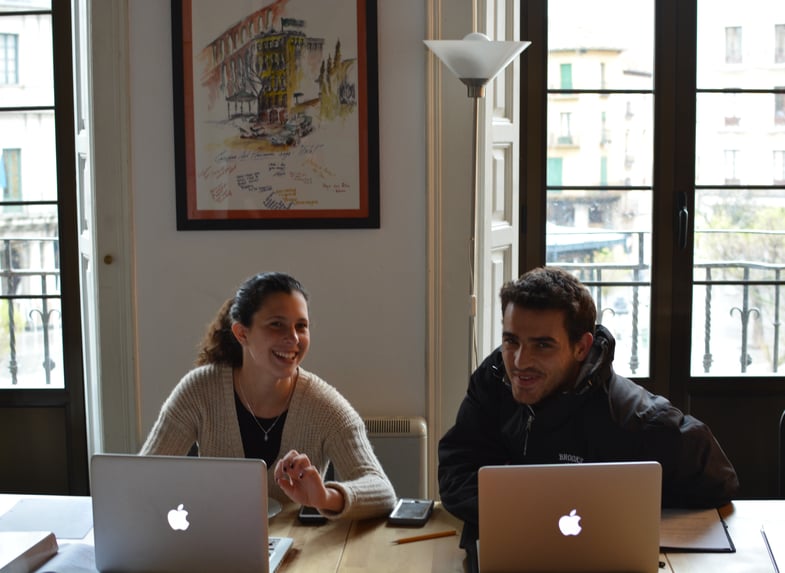 All have been admiring the newest addition to our school, a gift from European Art Classroom Winter 2015. ¡Muchísimas gracias!