As week one in Segovia comes to a close there is so much to look back on already. It still feels like we just got off the plane from Boston, not sure as to what time it was or even where we all were. The first few hours after our arrival seemed like a blur. The group had been up for almost 16 hours straight and then immediately thrown into a new culture.

As we stepped off the bus coming from the airport in Madrid our host families are lined up waiting for our arrival. This was one of the most nerve=wracking experiences I have faced. I was about to meet the host mom named MariCarmen who I was going to be living with for the next two and a half months. As we introduced ourselves, I immediately felt a rush of relief as she embraced me with a huge hug and loads of energy. Even though I could not understand a single word she was saying she seemed very excited to have me and couldn't have been friendlier. As I arrived to the house MariCarmen jumped at the opportunity to offer me loads of food. At this point in time I had track of how many hours I had been up; I just knew it was a lot.  I was half awake, sitting at the kitchen table, as we first attempted to have a conversation. After a while at the table MariCarmen told me to go get some sleep. That was probably one of the best things I had heard in awhile. I was beyond exhausted. 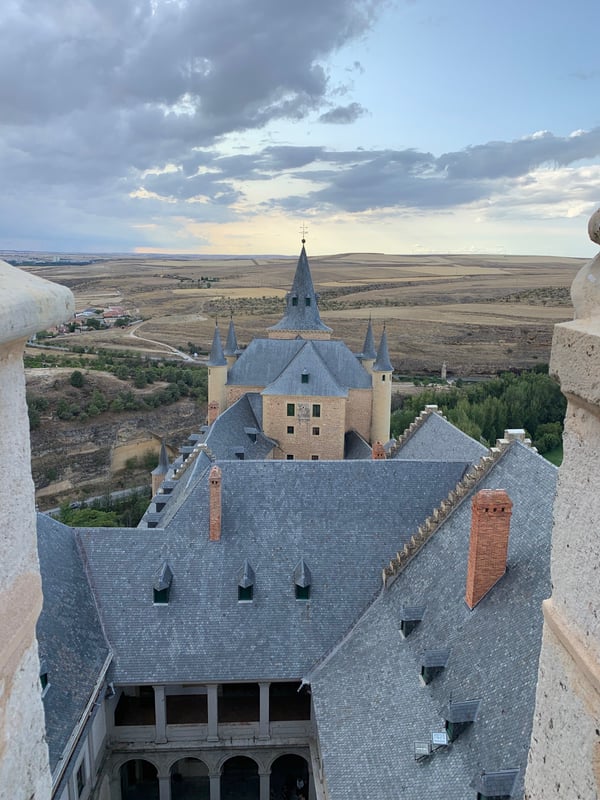 We couldn't resist the pull of the Alcázar (Segovia's castle), so we visited on day number three! (Photo credit: Will R. '20). 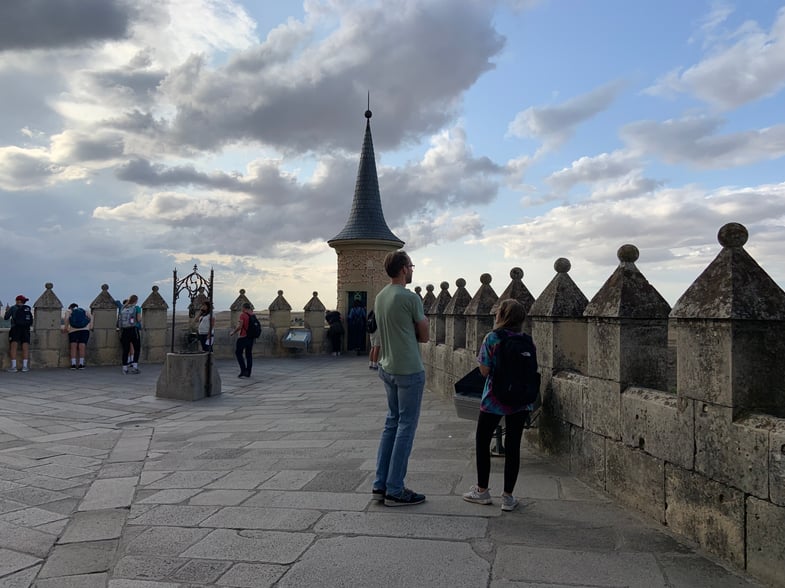 When I woke up at around 5pm, I was immediately drawn to the smell of the chicken she was cooking in the kitchen. As I got dressed and headed into the kitchen her warm welcome showed up once again. MariCarmen motioned for me to sit and eat the food she had prepared for me. The chicken and pasta was delicious and I took my best shot at trying to show her how much I liked it. After my meal it was off to school for the first time. MariCarmen showed me the way as it is a three minute walk from her house to the school which is in the center of the Plaza. 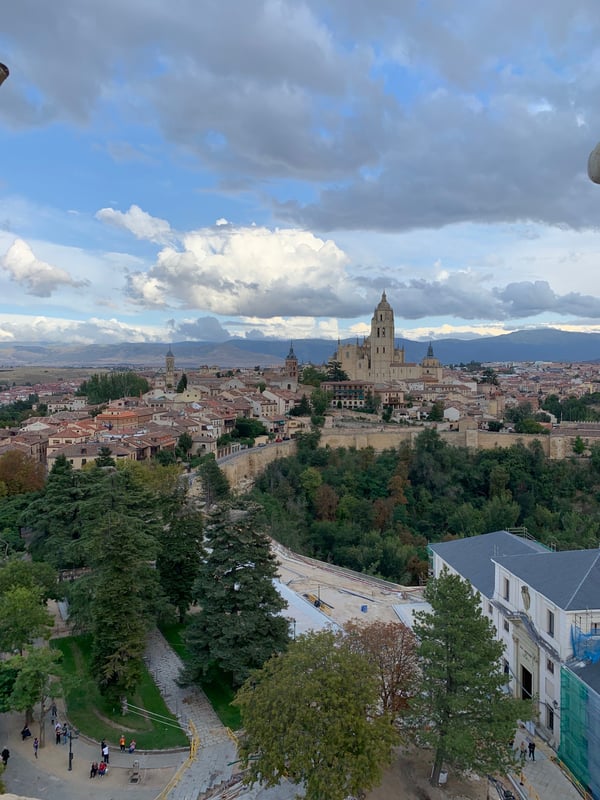 When arriving in a new environment first impressions are always extremely important. After a short eight-hour plane ride, my classmates and I stepped onto another short two-hour bus ride. We had not slept and had no idea what we were heading into as we looked outside at the huge mountains and dry landscapes. We then entered Segovia which had a very Roman feel to it. When getting out our host mothers were there waiting to meet us. Being introduced to them was followed with a hug and a kiss on the left and right cheek, which it became obvious was a common thing. After greeting our family, off we went on a short car ride with some awkward conversations and continuous nodding and repeating "sí." I met the family and went immediately to bed until 5:00 pm when I left for the school where there was dinner. I was shown my route back home and just like that the first day had ended.

Jamón is an essential part of the food culture of Castilla. A “road show” bus makes a stop in Segovia as part of a European campaign to promote pork products from Spain.

Meeting the Locals
After a day I already began learning, and I found myself in the city center trying to communicate with the locals. They all to my surprise were very nice and happy to talk although they could barely understand me. Meeting the locals consists of a lot of “hola’s” and even more “no sé’s.” Although we started meeting locals very early on we began to notice as a group we had been receiving weird looks in the streets. 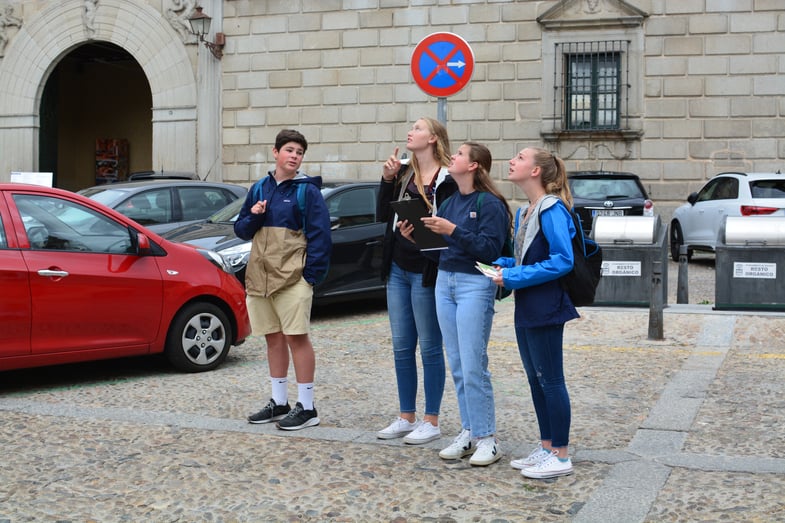 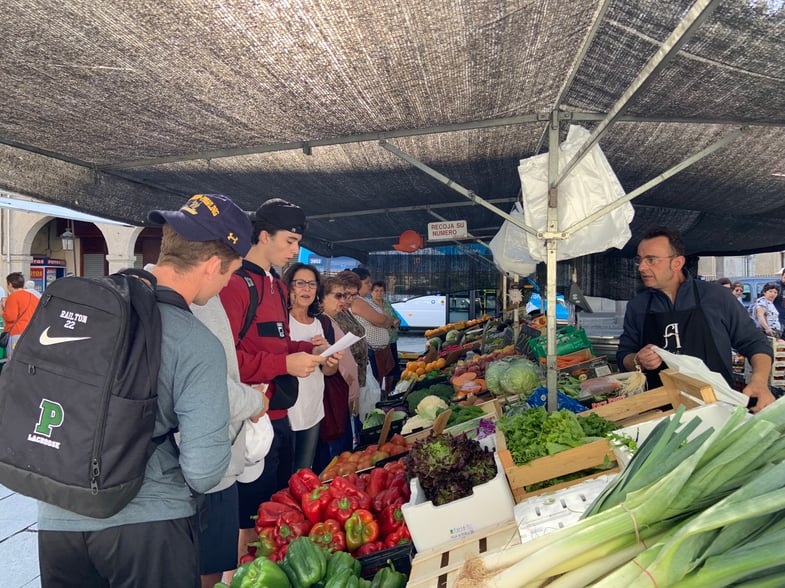 During or first Thursday evening cooking class, María José’s class was in charge of the meal. Here they are shopping for fresh produce at Segovia’s Thursday market in the Plaza Mayor.

Two of our head chefs sautéing vegetables to be included in our paella dinner.

Style
In the 70-degree sun, we found ourselves wearing shorts and t-shirts which does not seem to be a common sight here and may explain the looks. Almost all of the men and women of Segovia wear tight jeans or pants along with a baggy hoodie this time of year. We have not yet fully engaged in the culture here yet, and that is our goal in the coming weeks. As a group, we want to begin to blend in and truly feel what it is like to be a Segovian. 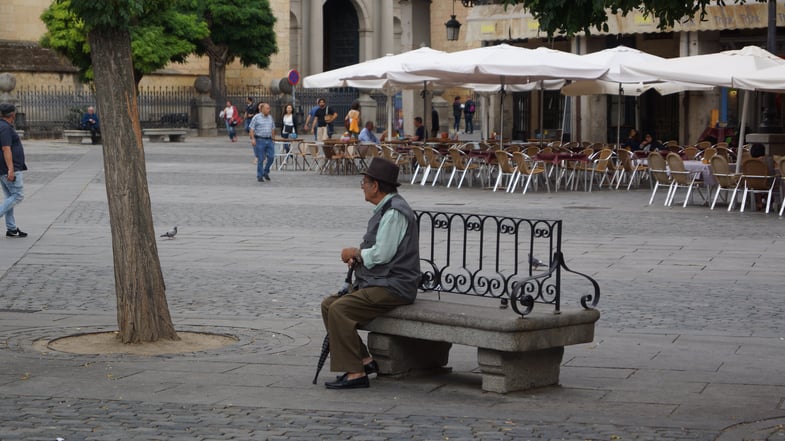 A moment in time in the Plaza Mayor (Photo credit: Sophia '20). 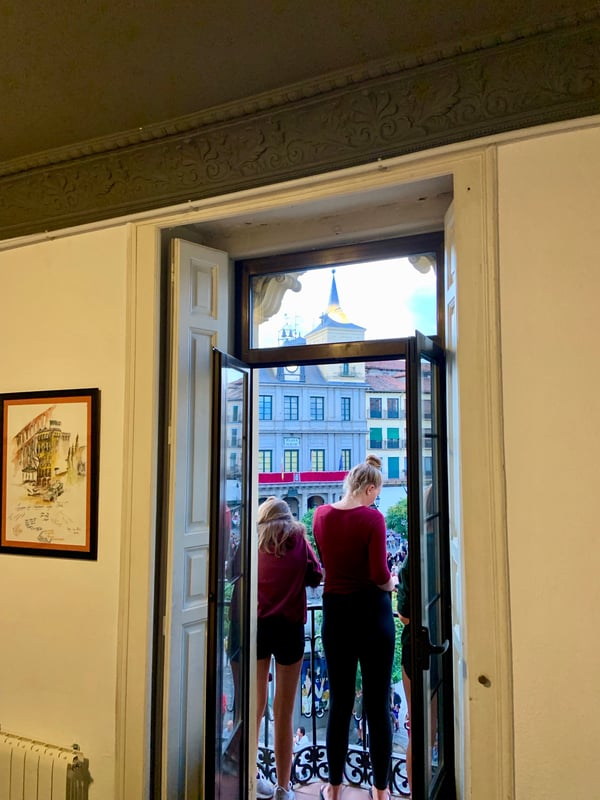 Proctor en Segovia students observe from the school as the city turns out for the procession of the Virgen de la Fuencisla (the patrona of Segovia — one of Segovia’s patron saints). 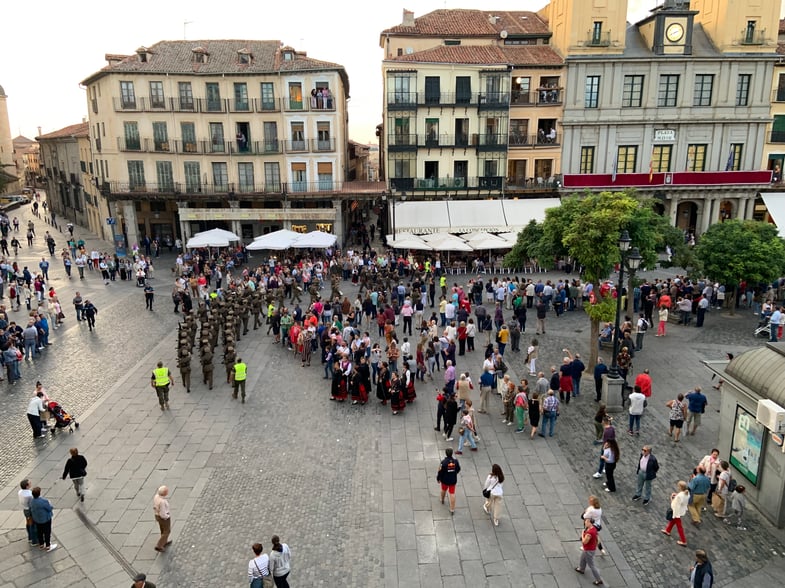 Host mom Conchi is among those in the center of the photo dressed up in traditional Segovian dress (segoviano).