Right now I am walking on a long empty road, forty minutes of solitude, just walking by the sea. I have not seen a single soul in this entire time except a black cat that has crossed my path. But now I have come across an old man sitting by the sea. He only has a stick, himself and a bocadillo while he gazes at the sunset. We are both looking at this gorgeous array of colors in the sky but were seeing it very differently. He has more life experience than me, knows this view better than me, and has more patience than me. But we are both here at the same time and same place looking at that fiery ball in the sky. 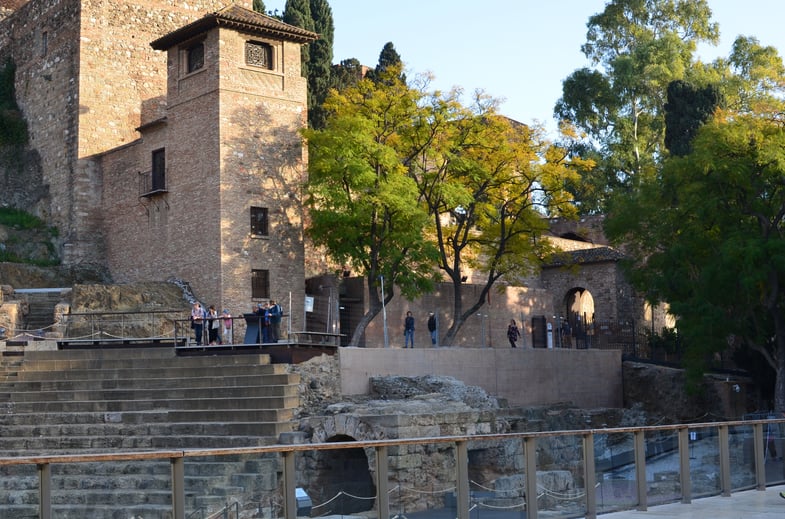 Proctor en Segovia visits the ancient city of Málaga, inhabited since Phoenician times nearly 3,000 years ago. Málaga was an also an important port and cultural center for subsequent civilizations: the Romans, Visigoths, al-Andalus (“The Moors”), the Kingdom of Castilla, and 21st century Spain!

Every time I see a sunset it's like the first time seeing it all over again; I have a new reverence for nature, a new gratefulness for life, and a new understanding of past primitive peoples and civilizations. Before we knew the earth rotates the sun, all we saw was, twice daily, a figure of energy in the sky rise/set and with that was created/destroyed our light, warmth, and motivation. No wonder we praised that stupid ball in the sky and worshipped sun gods, how were we supposed to put together that anything else besides magic was happening right before our eyes. Science kind of ruins the majesty and mystery of the sun. 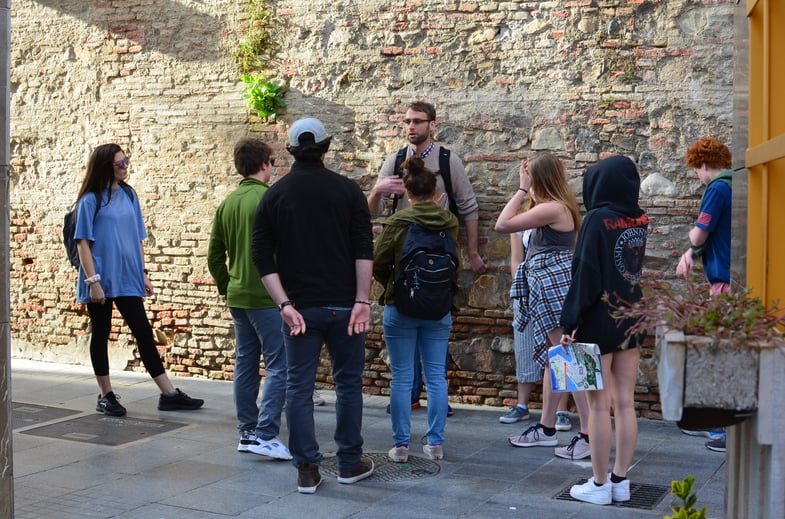 Discussing Málaga’s many “layers” of history. 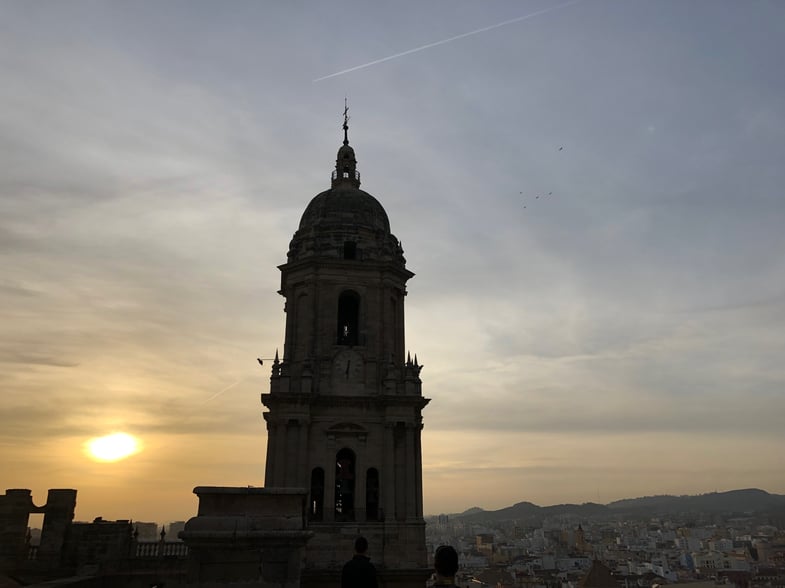 Taking in the views from the Cathedral rooftop. 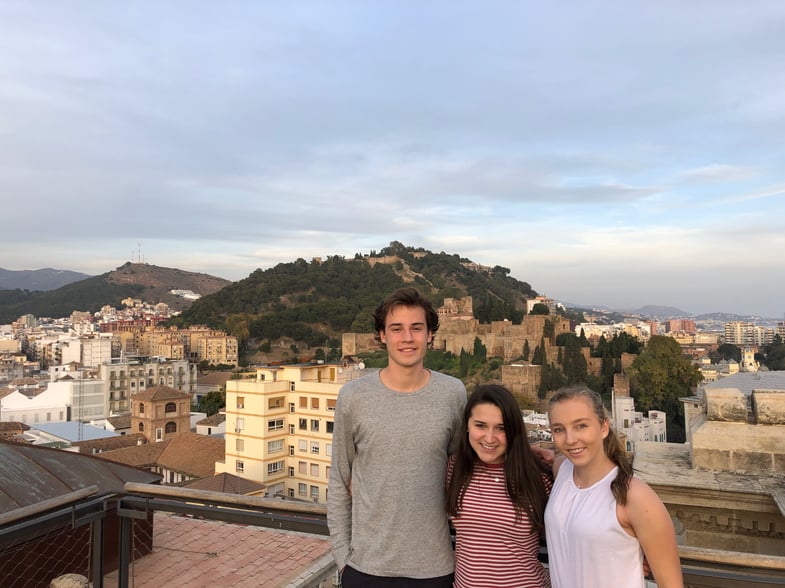 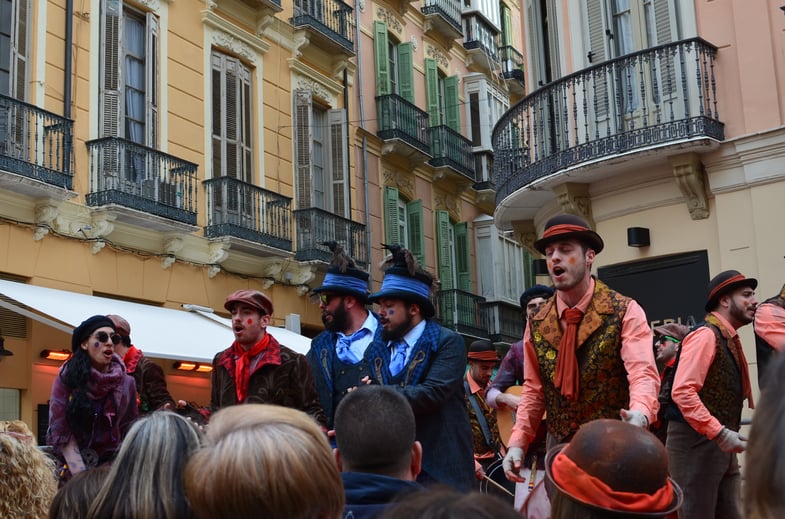 I’m still walking because even though some of the sun’s magic has been taken away, I am hypnotized by those colors. Maybe that's why this old man by the sea is here too, maybe he’s come here for solace, maybe he’s come here to think, or maybe just to look. But either way we're both here. I’ve realized my phone has died and I don’t really know where I’m going because I don’t know this area like he does, but it doesn’t matter because I am enjoying myself. I just started walking and I forgot to stop. This reminds me of Forrest Gump, he just started running and kept running because why not? Because he wanted to. I could most definitely see myself as Forrest Gump, starting to run one day, ending up in another city, state, or country, not because I’m running away from anything but just because I forgot to stop or to turn around. Maybe that’s what happened to this old man, he just forgot to turn around and ended up here. It could happen to anybody, because damn those colors are hypnotizing. 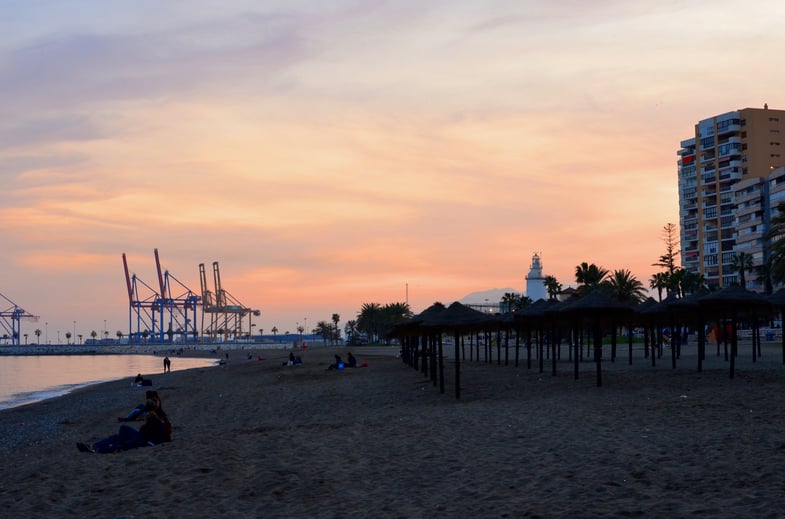 After a long drive east from Málaga, we made it to the beautiful Cabo de Gata region, scattered with white houses. It was well worth the trip. After we got all settled in and sorted out the rooming situation we were off to dinner in our small Mediterranean coastal town, Las Negras. We had a nice pizza dinner from a local pizza shop. 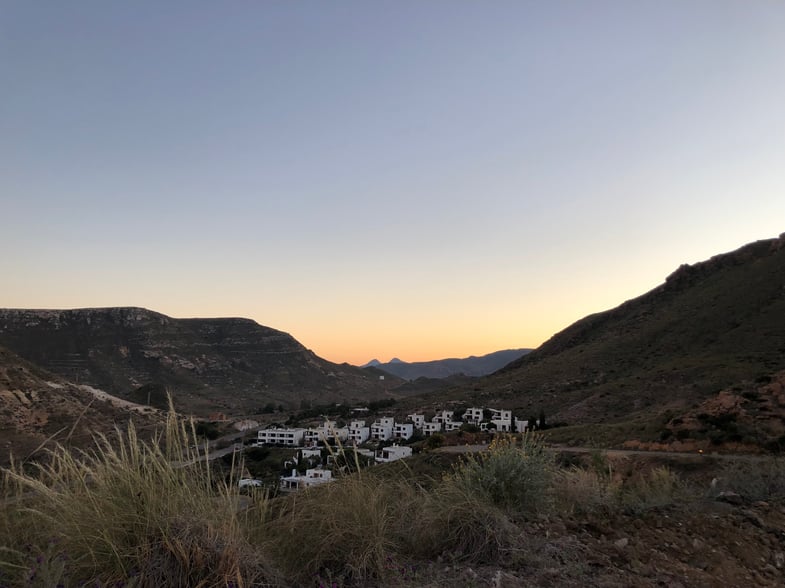 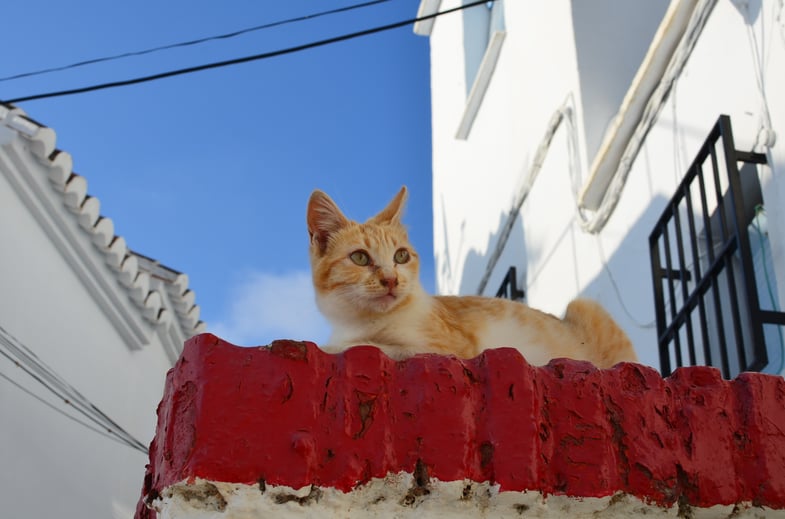 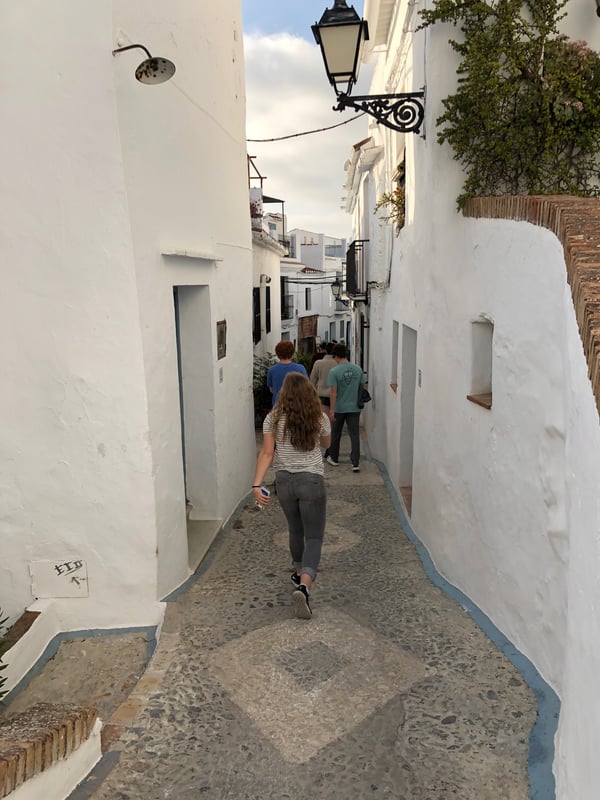 A stop at the “pueblo bonito” of Frigiliana on the drive between Málaga and Cabo de Gata. 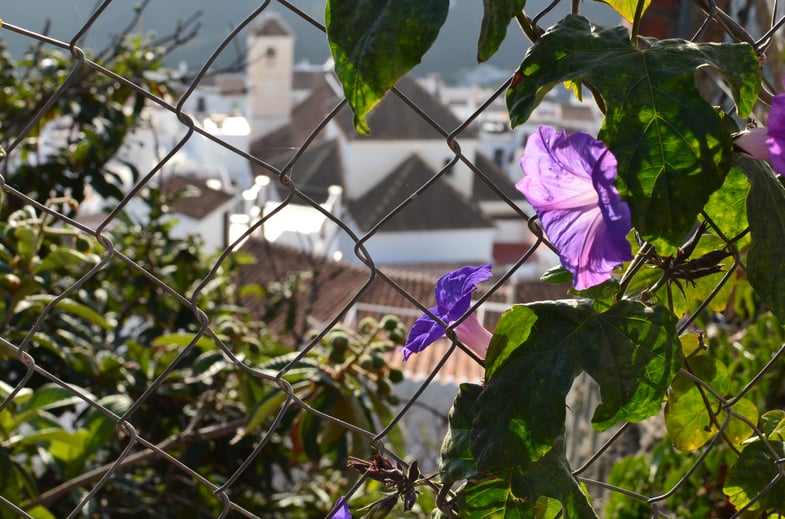 We woke up at around 10 am the following morning, made some breakfast, and had a relaxed morning in our casa. We then got ready to go to the beach that was about forty five minutes away. On the way we stopped to grab ingredients for bocadillos (sandwiches on baguette bread, usually with cheese, ham, and olive oil). As we arrived at the beach, I could feel the cool ocean breeze that I hadn’t felt in a while. We started to walk down to the beach from the parking lot, and the sun was beating down on us. After we made our bocadillos, I began to relax on the beach, but then I saw some goats. There was a herd of goats grazing in the grass above the beach. Many of the group members went over to see the goats even though they didn't want to have anything to do with us. As we made the trek home, we stopped at a fantastic overlook of the ocean. We got home, and since there was no wifi at this house, many of us played cards or read books. For dinner, the cooks made a fantastic chicken curry with rice and a salad. 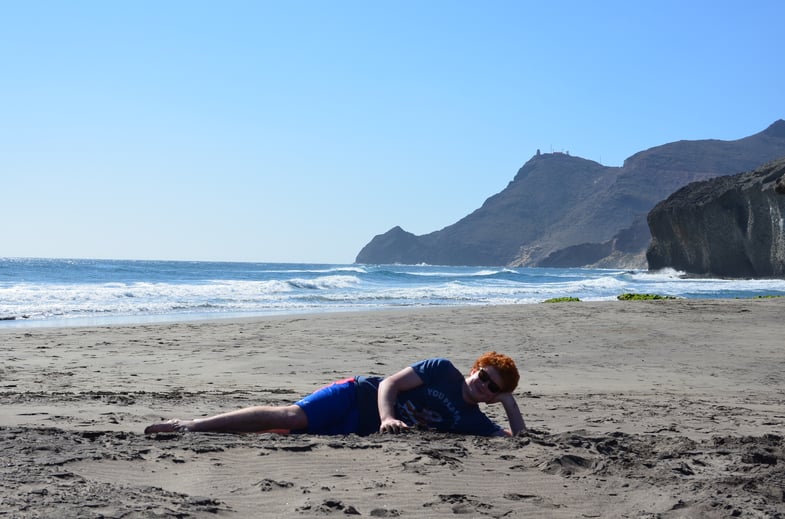 As we woke up for the full day many of us were eager to go horseback riding. We drove about seven minutes to the horses, and we all got on and learned the names of our horse; my horse was named montaña (mountain). We rode them along in a train formation through some hills to a beautiful beach It was a great experience, and I believe most of the other students loved it too. Then the night came around, and I and some other students made croquetas and tortilla de patata with some great help from Laura. 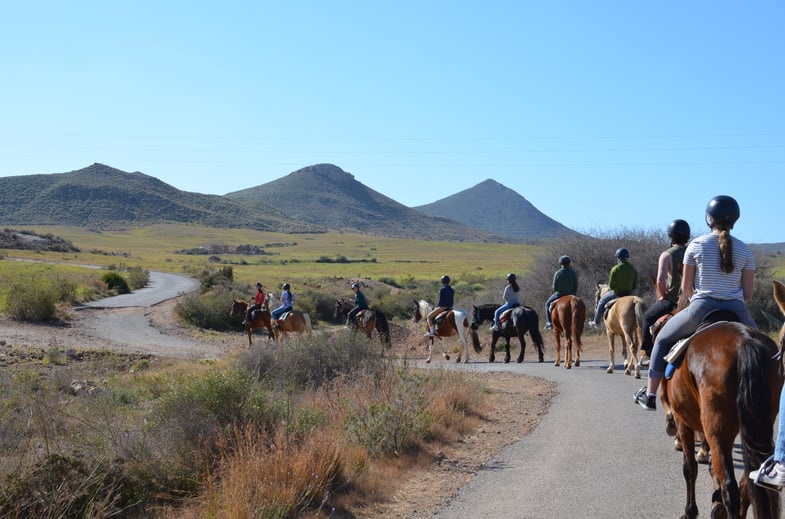 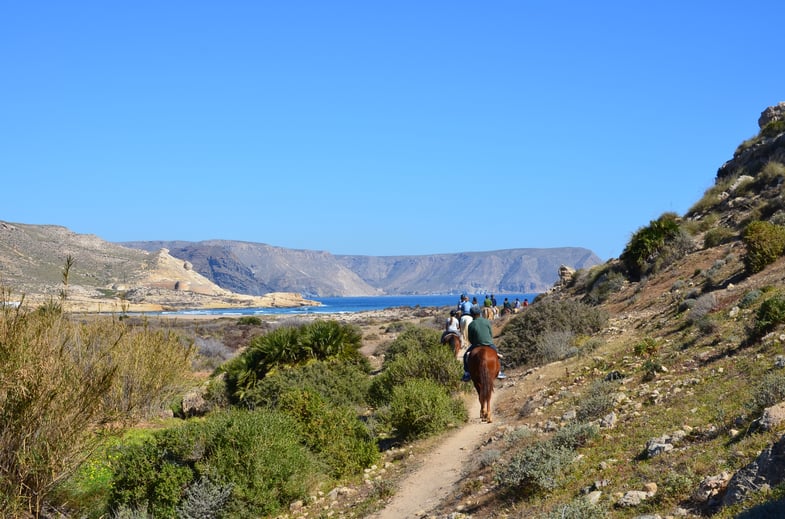 Then the travel day began, and I say “day” for a reason. We had our 2.5-hour drive to Malaga, then a 3-hour train to Madrid, and then a 30-minute train to Segovia. We traveled for about 8 hours but looking back it was well worth it to be able to go to a beautiful region not very easily accessible. 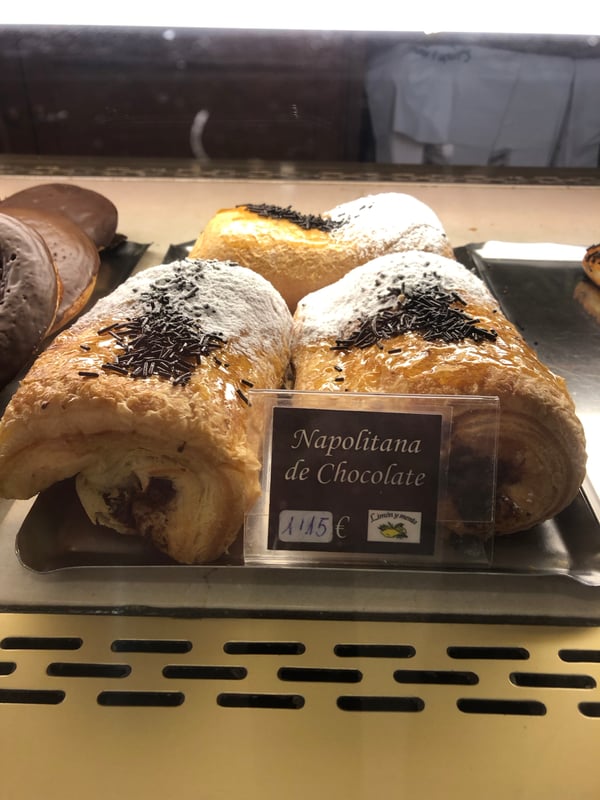 I feel it like it was yesterday that I ate this pastry: a napolitana de chocolate. I knew she was going to be good the second I saw her. After all the wonderful remarks I had heard about Spanish pastries, I knew I had to try it. The only way that someone cannot eat this pastry is to say that they are allergic to it. The simple but remarkable flavor that your mouth experiences includes sweet, high-quality chocolate and flaky but not very messy croissant. When you are done that sweet taste just leaves you wanting another one. Even though the powdered sugar and chocolate chips may just seem like decoration, they divide the napolitana in two and add two different flavors to each side. The powder gives the croissant a little bit more of a dry taste but the flavors linger longer as the chocolate and powder stick to the roof of my mouth together. The powdered sugar does not have a taste as it’s overwhelmed by the chocolate; it creates a different texture. The chocolate chip side creates a burst of chocolate after every bite. Just the sound of its name,"napolitana de chocolate,” is a memory of the beginning of the trip and that this trip has gone by so fast. 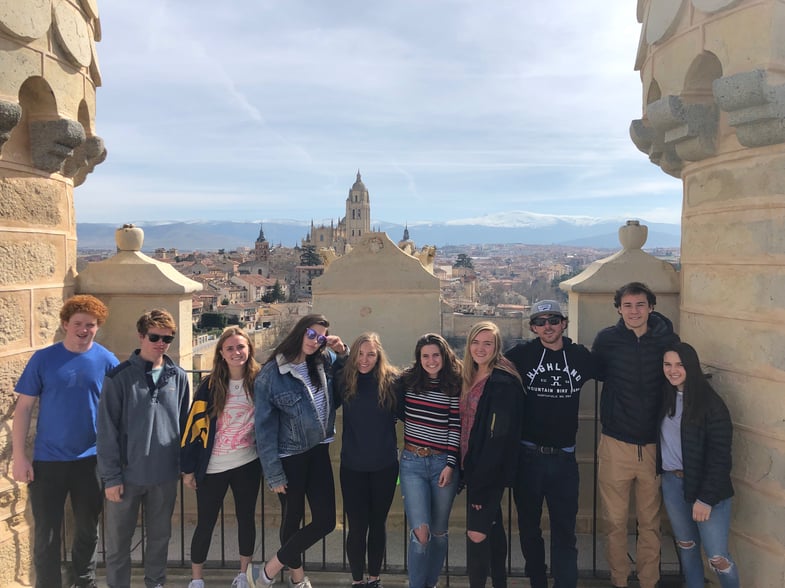 Back in Segovia after their final excursion to Andalucía students completed final projects and exams, and celebrated with and said their goodbyes to Spanish teachers, afternoon activity instructors and, of course, host families. Here they are on top of the torre de Juan II of Segovia’s Alcázar (castle). 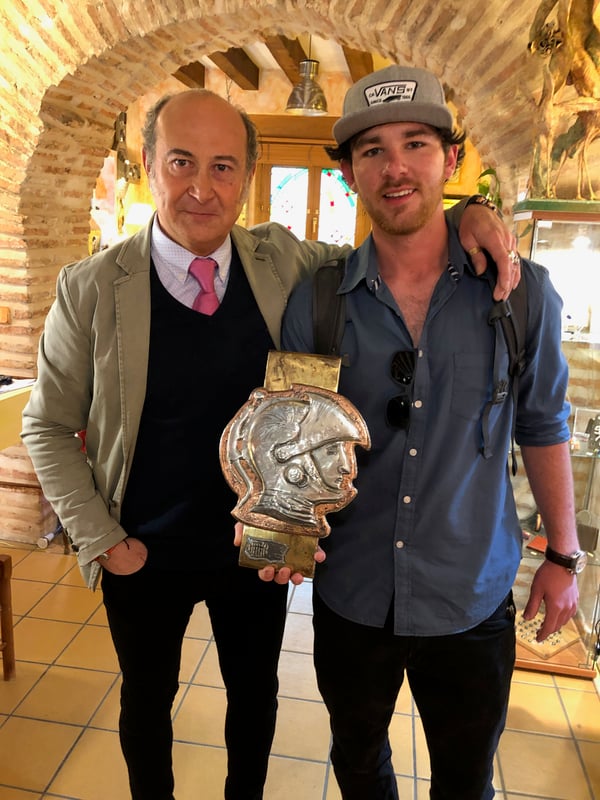 Times have changed.
Times are strange.
Here I come
But I'm not the same. 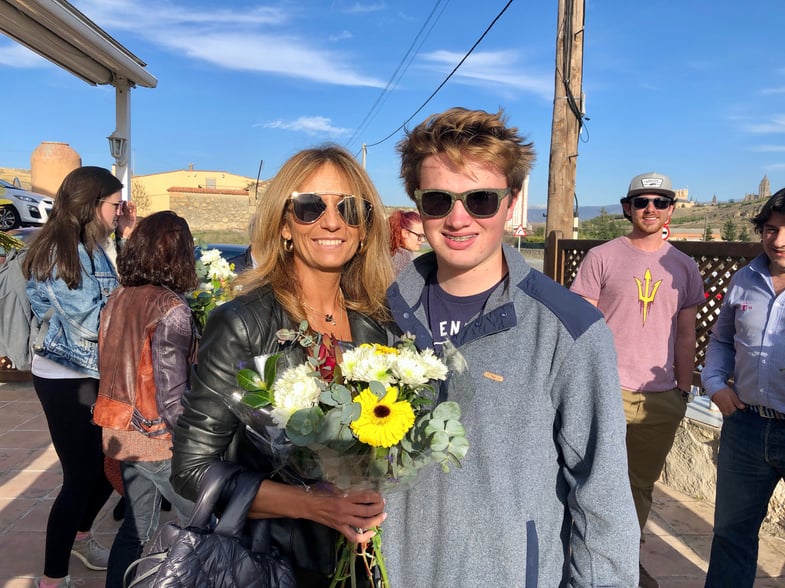 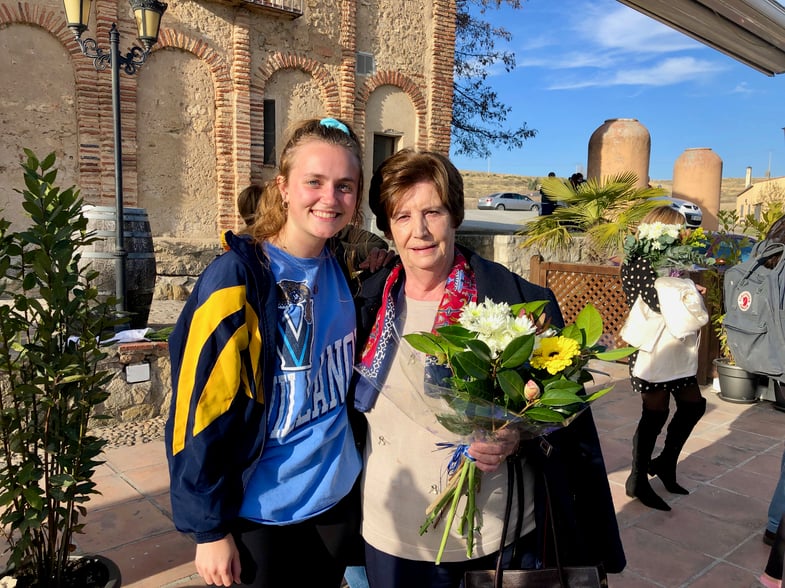 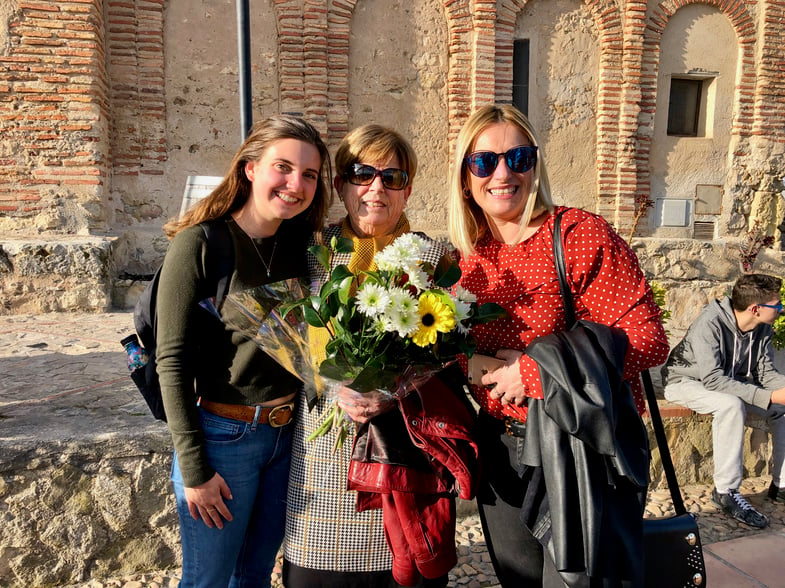 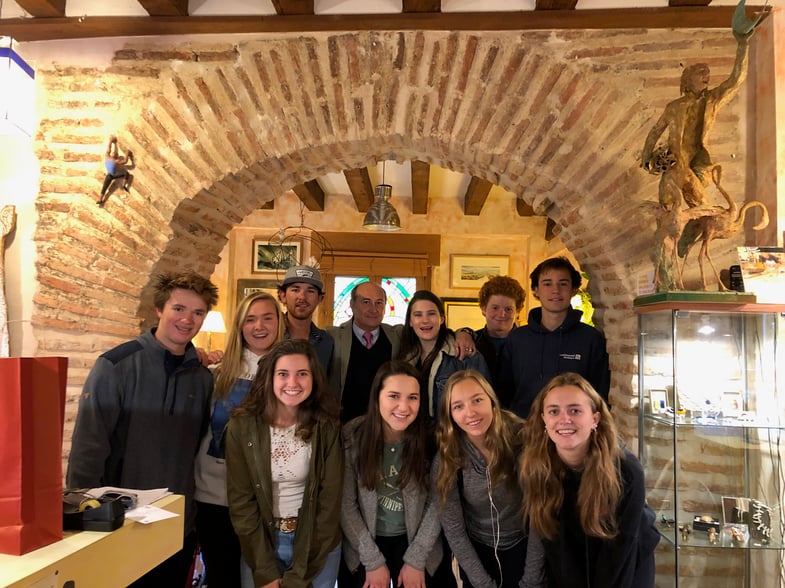