Proctor en Segovia: Have You Ever Fallen in Love?

Have you ever fallen in love? With a city of course, because we have. The group was going to embark on one of the biggest adventures of a lifetime. On Wednesday morning the group boarded the bus that would take us to the Segovia train station, which would take us to Madrid and then into Barcelona. A day full of travel, worse than it seems. We went from bus to train to another train and finally rode the high-speed train right into Barcelona. “Big, Bad, and Bold” as Nicole said when we found out this was going to be the city we would explore for the next three days. 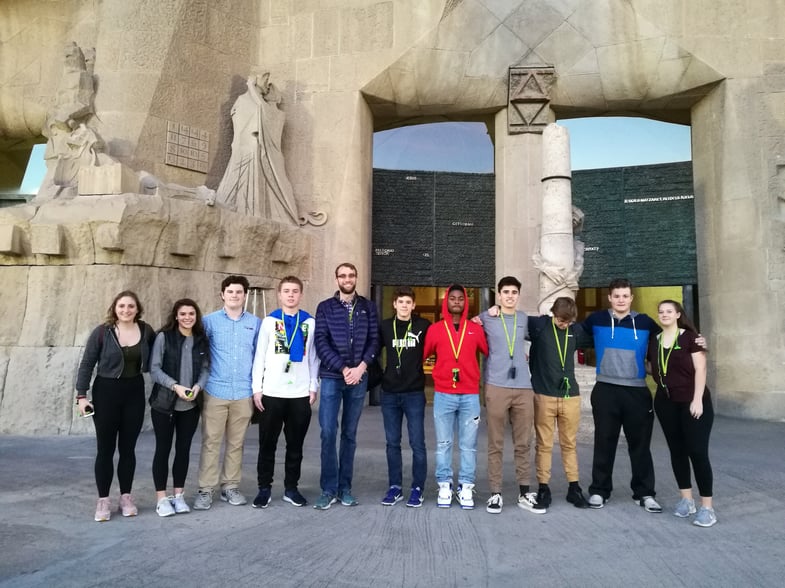 As we ascended up the Metro steps to the streets of the marvelous city it smelled of diesel and fish. Not two smells that go particularly well together, but nobody was complaining because we were in Barcelona. There were tall buildings, pastry shops on every corner, taxis lined up behind each other, and people walking on all sides of the streets. The city felt bigger than I ever imagined. Eager to explore what lay our surroundings we allowed Ryan to lead the way to the Sagrada Familia. 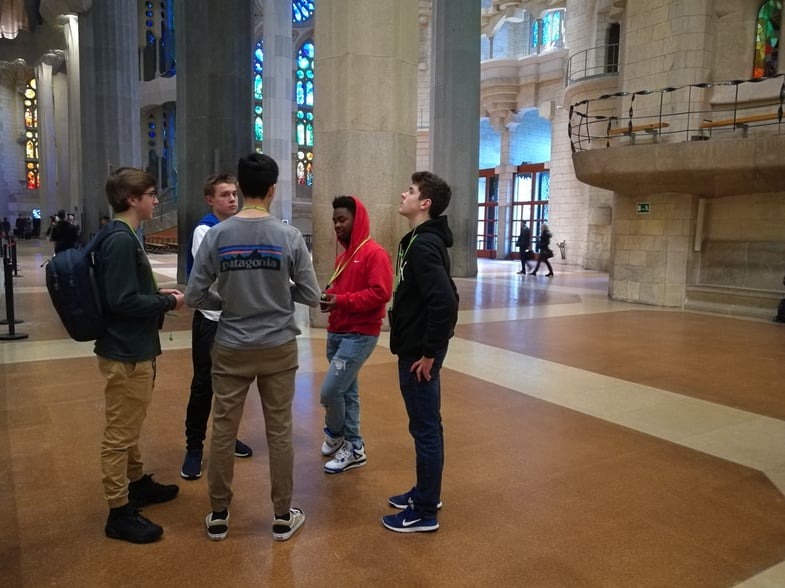 The Sagrada Familia, which has been deemed a UNESCO World Heritage site (along with the rest of the works of Antoni Gaudí) and was named a basilica by the pope (basilica being the greatest honor a religious building can receive in the Christian religion) is a striking figure over the Barcelona skyline. It can be seen for miles around, and its intricate artwork and feats of engineering astounded us as we walked around its tree-like columns and under its canopy of a ceiling. 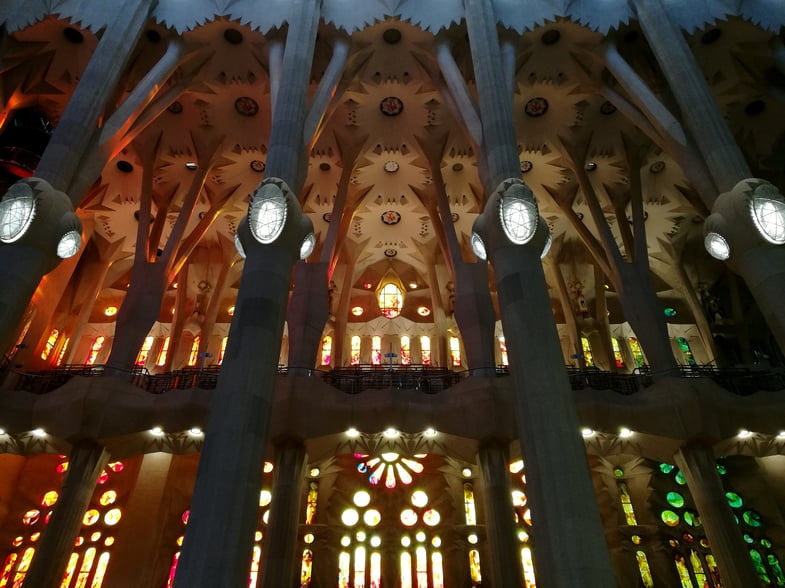 The outside of the basilica is as astonishing as the interior, its spires appear to touch the sky and the detail in the façades are impossible to accurately describe with words. The amount of care Gaudí put into designing the façade and the time that sculptors put into the statues they created is tangible, and it showed on the faces of everyone viewing them. 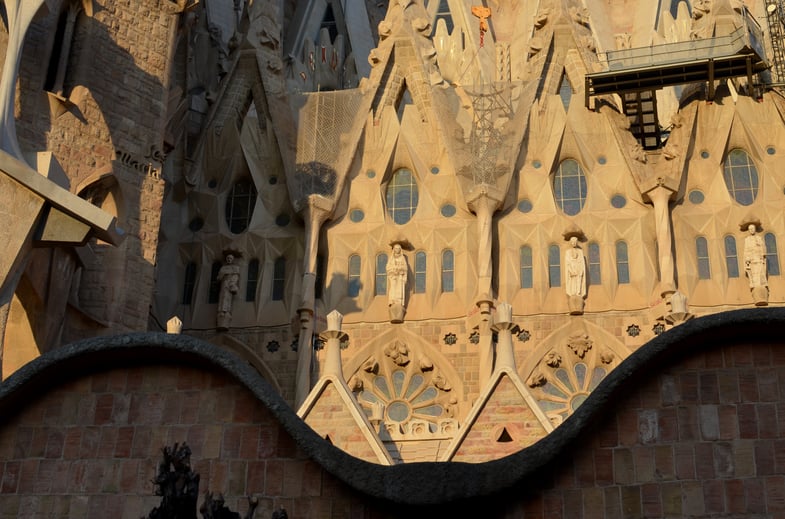 Thursday morning came fast and was a day full of visiting more historical landmarks. Walking and talking our way through the Old Quarter was how our morning started. Small presentations were given in pairs to try and teach the rest of the members of the group how the Iberian Peninsula came to be home to many groups of people. 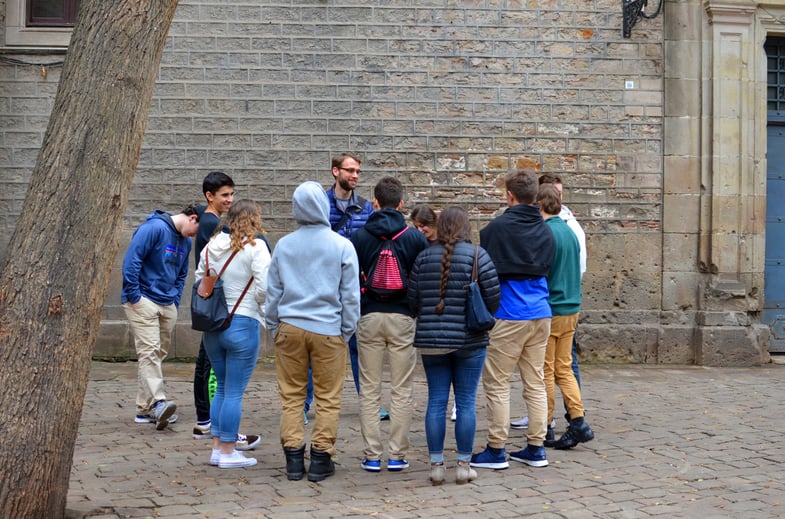 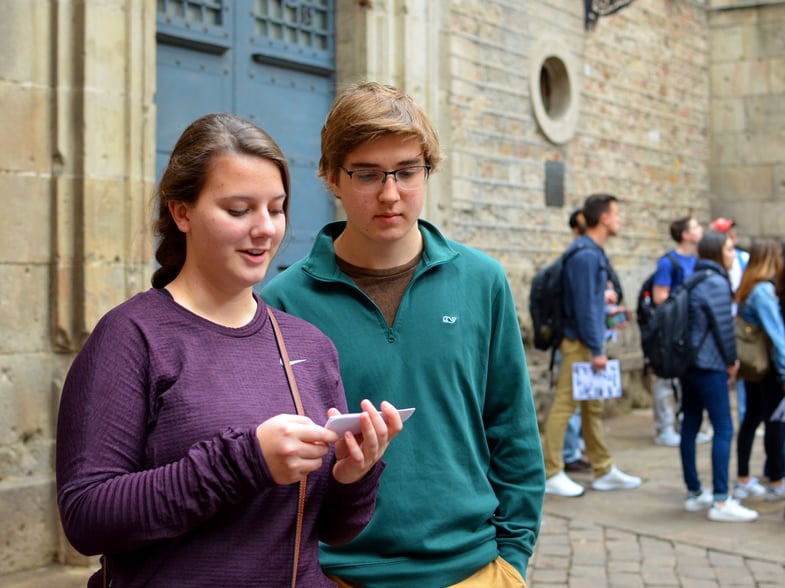 Sam and Jack N. present on the Iberian and Roman history of Barcelona.

For example, Nicole and Patrick talked about the rumors spread about Jewish people when the Black Death and famine struck Catalonia's population. El Call (the Jewish quarter of Barcelona) was struck by a mob, destroying homes and killing hundreds of Jews. In 1492 Jews were banned from Spain. The way of learning in Spain is what motivates each student to complete their work and become interested in the material we are learning. Ryan and Mikaela encourage experiential learning. Walking tours, journaling in a cafe, visiting the monument we are studying are just some of the ways we learn outside of the classroom. 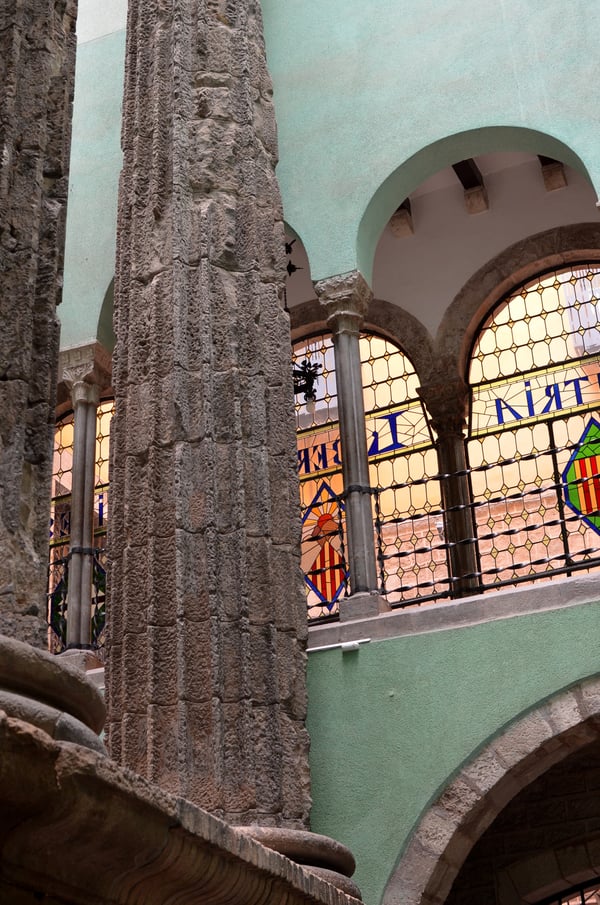 A column from the Roman Temple dedicated to Emperor Augustus is still visible in the heart of Barcelona. 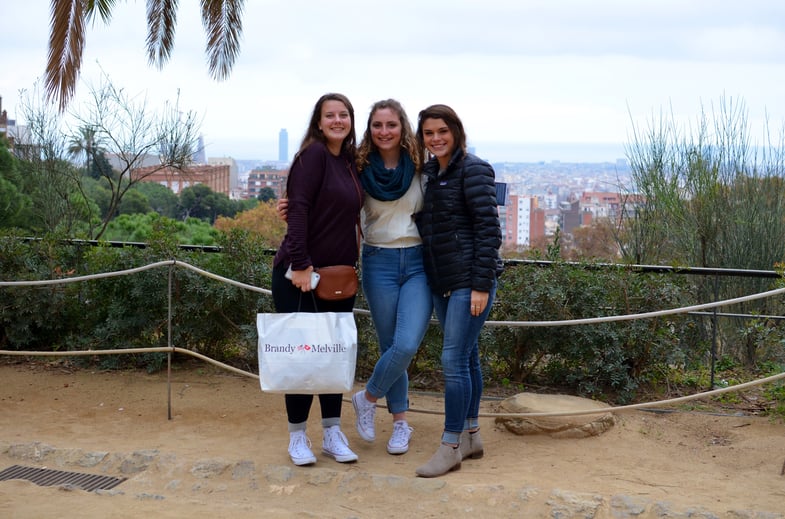 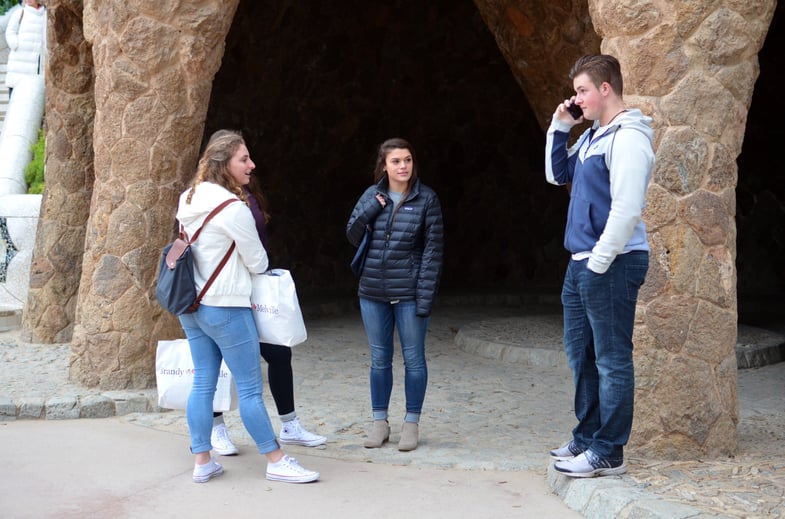 The end of the day came as a surprise. Ryan got the entire group tickets to see Barcelona play Espanyol at 9:30 pm at Camp Nou. The adrenaline everyone felt leading up to the game kept everyone was in a good mood. Arriving at the stadium minutes before the game was a sight we had never seen before. People lined up to the street as they waited in the security line. There were toddlers in strollers, men and women quickly drinking their last few sips of beer before entering the stadium, and the sound of loud chants filled the streets. Easily navigating our way through the crowds each student found their seat, and, for the next 90 minutes, never took their eyes off the game. The crowd was on its feet almost the entire game, and that is what made it so entertaining. The screaming, cheering, and whistling continued throughout the entire game. Nelson, Teddy, Neal, and Mikel quickly learned the cheers and became one with the rest of the crowd. Two goals scored quickly in the first half kept everyone wondering what the final score would be. Barcelona beat Espanyol 2-0 to advance in the “Copa del Rey” (Spanish Championship), and that was our last experience in the city of Barcelona. Smiles spread across everyone's face as we walked back to the hotel, dreading the thought of having to leave the next morning. The experience was short but many memories were made. 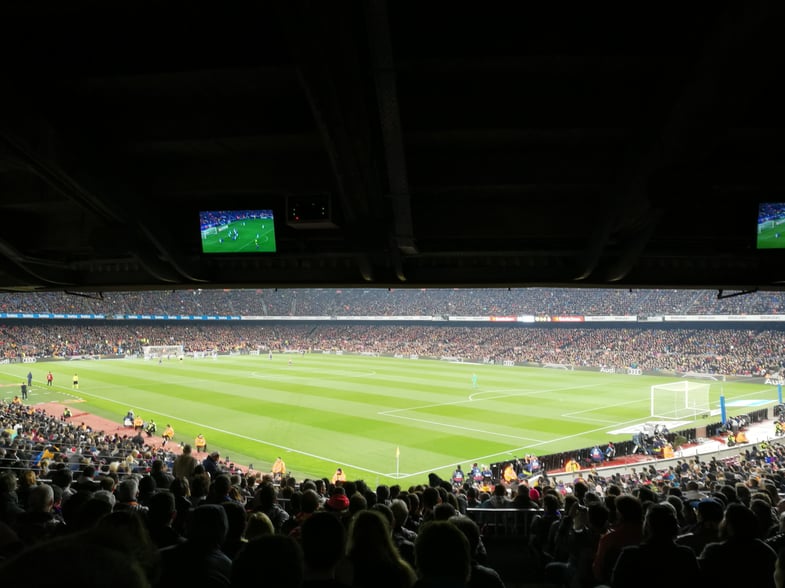 The drive out to the more rural parts of Catalonia was as normal as it can be, blasting country music and eating pistachios while rolling through the mountains of Northeastern Spain. We arrived at the house we would be staying to the overwhelming scent of farms (and, yes, what goes with farms) mixed with the cool winter air. After a wonderful dinner of spaghetti bolognese crafted by the master chef Teddy, we headed to bed. 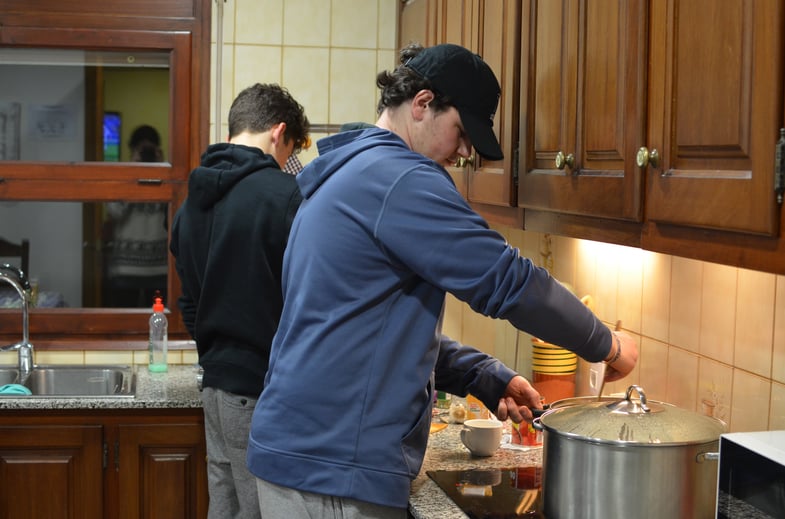 Teddy and Nelson work their magic in the kitchen.

The next day it was off the museum of Salvador Dalí and the coast. Walking through the museum you get the idea that nothing in the entire place is real and that it is all just one big dream sequence: you are simply viewing into this man’s subconscious. 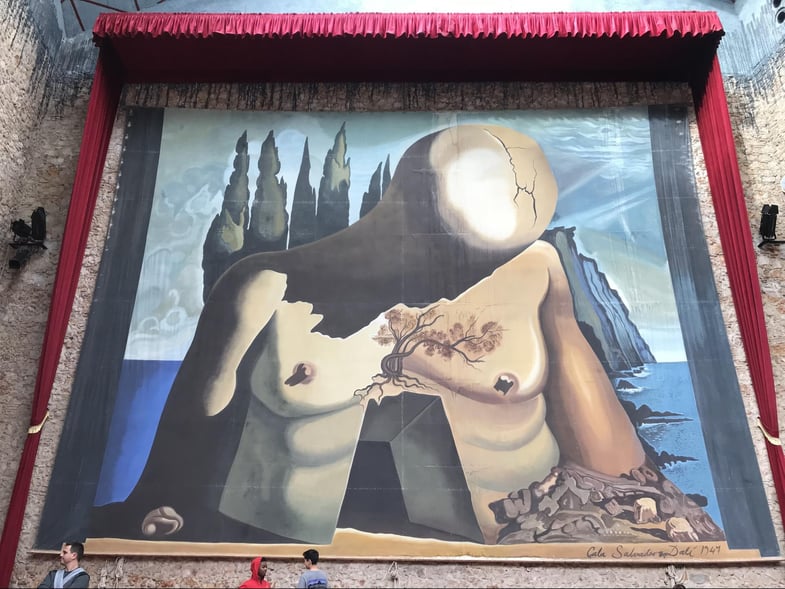 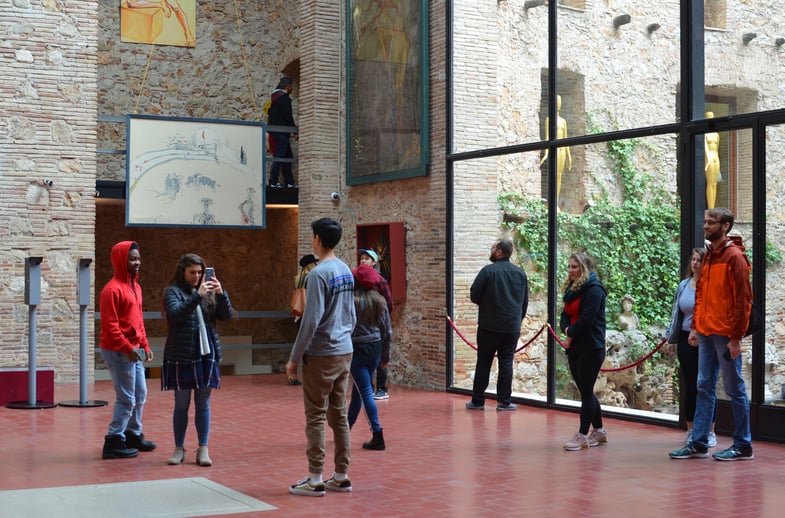 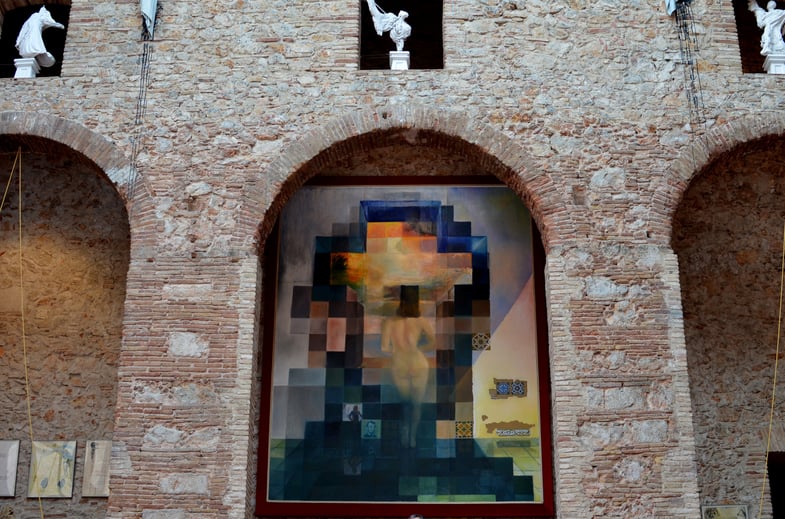 Following the psychological journey that was the Dalí museum, we found our way to a fishing village that was once the site of a Greek trading colony. Homemade bocadillos and ocean views… doesn't get much better. After a brief trip to another fishing village through the high peaks of the coastal Pyrenees and a heated rock skipping competition, we were back to our house for our final night in Catalonia. It does not get any better than spending five days traveling through the cities and valleys of Spain. 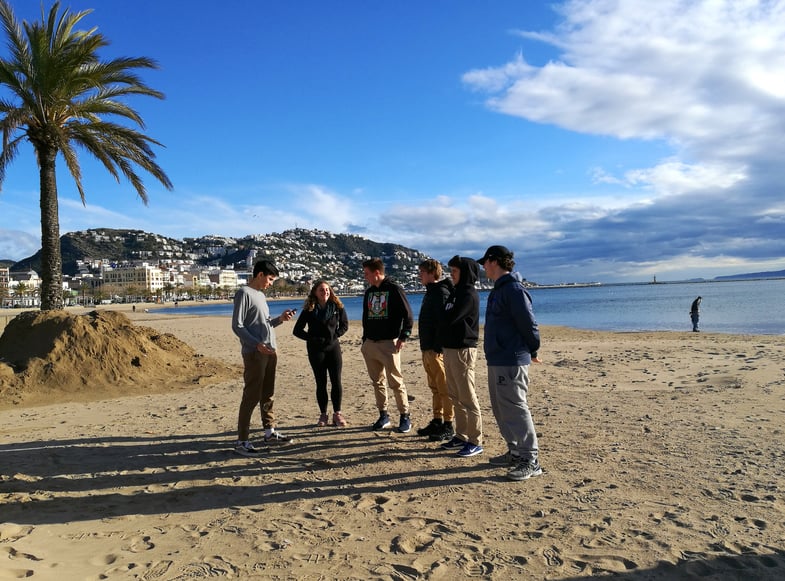 A chilly day at the beach in Roses, Girona, Catalonia. 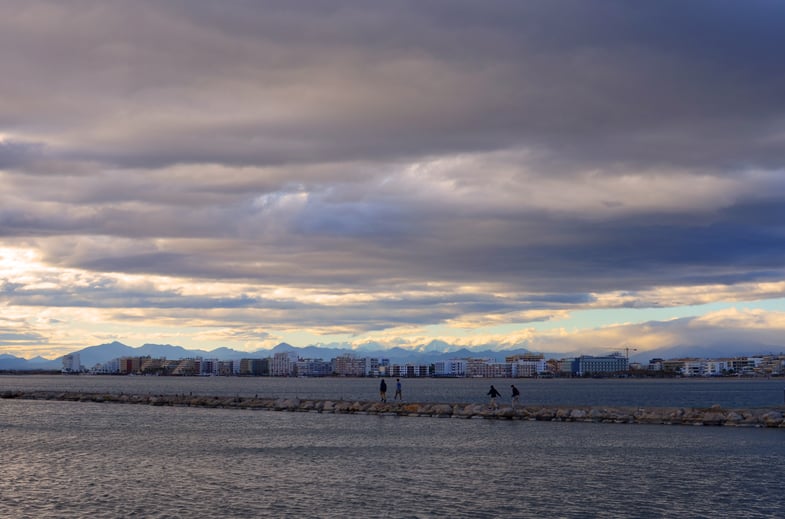 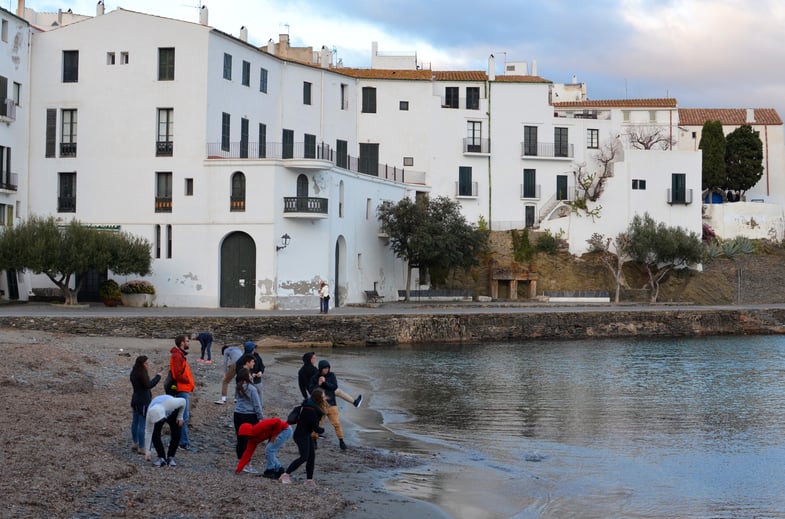 And last but not least a visit to the Greek and Roman ruins at Empúries.