The first week in Segovia is one of new experiences for this group of students studying abroad in high school. Here students happen upon one of Segovia's most famous vistas. Segovia's imposing Alcázar (castle) is visible in the background.

Driving through the unfamiliar land, my eyes were running from the mountains in the distance to the vast valleys spread out in front of us. I noticed the houses were much smaller compared to homes typically driven past in the States. The climate was also noticeably different as soon as we exited the bus again to meet our host mothers. The air felt drier and obviously warmer than the frigid below zero temperatures I was just enduring hours before. Slowly walking towards the huddled group of fur coat-clad women, I started surveying for my soon to be temporary mother. I was immediately nervous due to my realization that the extent of my Spanish was “me llamo Greer”. Mikaela introduced me to Juana and she greeted me with a small smile and some quick sentences in the foreign language. My eyes darted to Frances for some help but she was nowhere to be found. So, the most I could do was say “Sí” and nod my head. After a few minutes of struggling through Spanish we were at my new home. I was unbelievably excited to see my new bed and be able to rest for a few hours. Juana set off to the kitchen and the quaint, but homey apartment was filled with unknown, yet delicious scents of food.

Before I nodded off into a deep sleep I took a few minutes to think of everything that had just happened so quickly. I came to the realization that I was in Spain now. I was lucky enough to be able to be a part of this experience. I was exhilarated at the thought of the amazing places we were going to travel to, and the relationships I was going to create soon. I turned off the light, curled up in my new bed and fell asleep thinking of churros and chocolate. 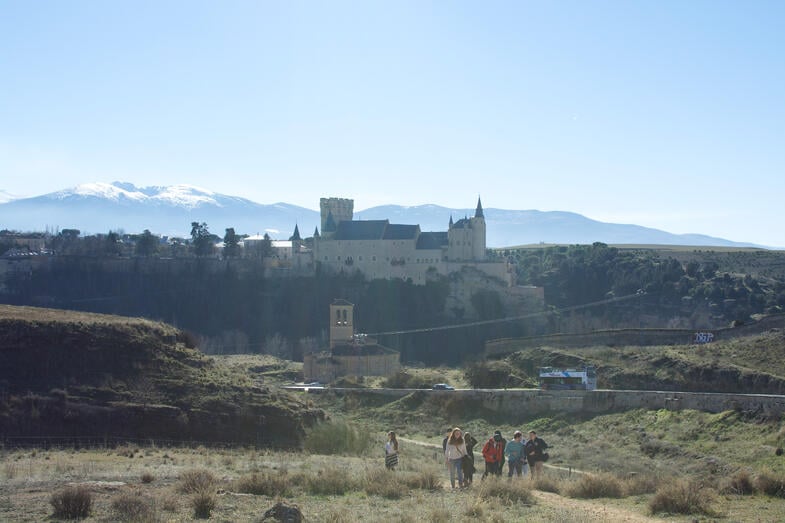 We were treated to a spectacular, sunny winter day 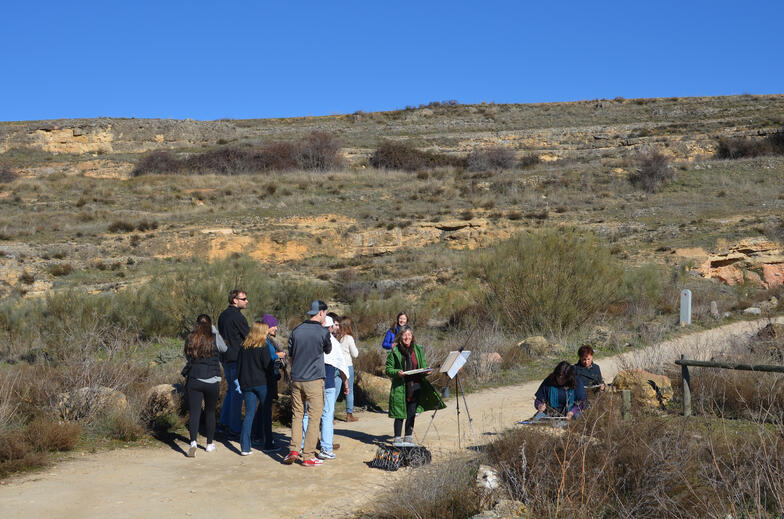 Several local artists took inspiration from the scenery as did we from their artwork.  Photo credit: Davis Vingers 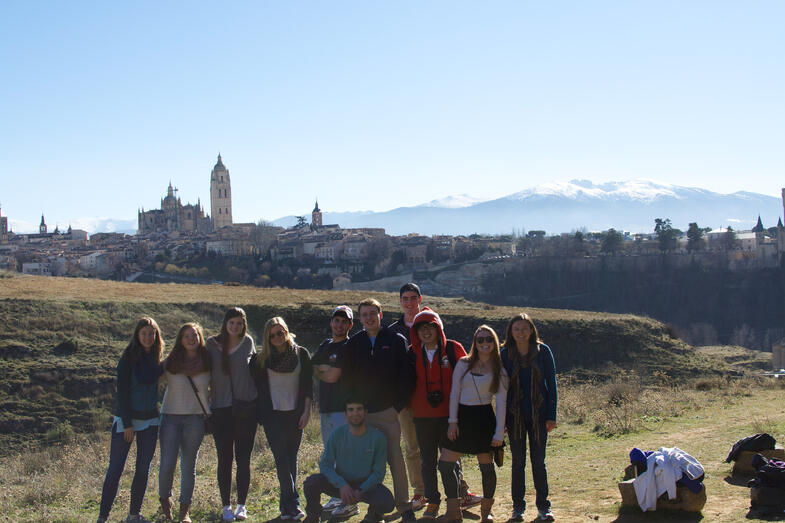 Proctor en Segovia Winter 2015 with the old quarter and snow-capped Guadarrama mountains in the background!

Another striking vista of the city, this time from a ridge immediately opposite the Alcázar. In the distance is Segovia's skyscraper, the bell tower of its Gothic cathedral. 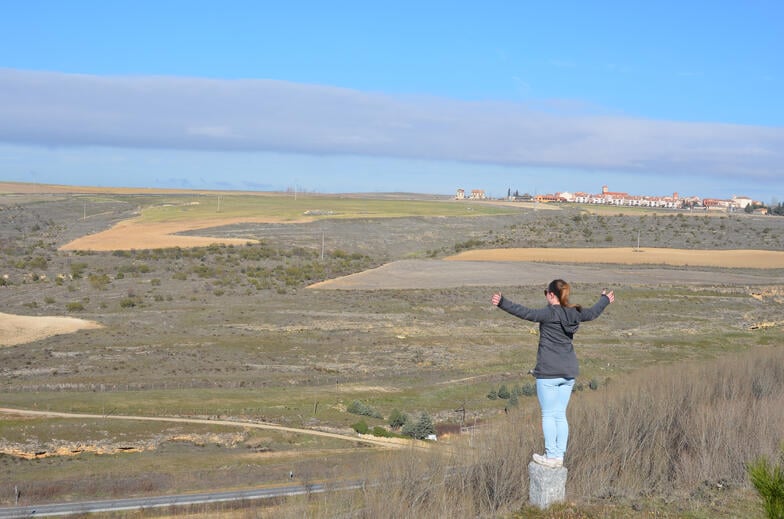 Gazing out at the meseta or high plains of Old Castille.  Photo credit: Lindsay McCarthy

The darkness of evening has already fallen over Segovia when we begin our journey to the Plaza Mayor. Tops of buildings blend into the sky above, but their ancient stone forms mandate our path. The night is young by Spanish comparison, but our journey has been long and we are only standing thanks to a hearty meal and a siesta in the previous few hours. My host mother, Conchi, walks beside me, and we are listening to her sister-in-law, Cristina (Lindsay’s host mother) talk about Segovia and other things that we cannot understand. Conchi responds with earnest and knowing remarks, but our comprehension of the Spanish language is still too basic to be able to understand Cristina’s rambling enthusiasm. Not more than 500 feet into our journey, we come upon the figures of two other group members, Boyd and Greer. Their host mothers, Carmen and Juana, are walking with their arms linked, sharing the undoubtably close bond of living for many years together in the same small city.

After making our first turn, we meet up with many other families. Each host parent taking care to introduce themselves. Some taking the time to tell us about Segovia’s history as we walk, others gossiping amongst themselves, though about what we may never know. We quickly reach the aqueduct, a massive set of consecutive arches made of sturdy granite blocks. Not so many years ago, this structure brought water into the city, but now it stands as a monument to Segovia’s history and as a convenient second center to the city. At this time on a Friday night, the plaza below the aqueduct is filled with people only slightly older than us, gathering before what is bound to be a big night out. Instead of staying here, we move onward, upward and leftward to a street with hanging lights above and store fronts on either side. For a large group, our pace is fast and our purpose guided. The mixture of English, Spanish and broken Spanish is oddly comforting, though entirely new. Light comes to the faces of our host parents when they see that we understand their Spanish and a sense of excitement comes to ours as we walk through the streets. The San Martín church is uplit, accentuating the smooth surface of its sandstone blocks and the intensity of the statue below it.

The Calle Real spits us out moments later at what can only be the Plaza Mayor. A circular plaza composed of dark cobblestones and elegant granite slab that is closely surrounded by three and four story buildings. Each having a set of patios across the front, wrought iron railings that have been intricately formed into flowers and vines. Within the plaza there is a sense of fiery energy, easily juxtaposed with the equally apparent sense of tranquility. Narrowly off to the left sits the Cathedral. An ode to a time of deeper thought and greater purpose, a time when father and son dedicated their whole lives to the creation of one towering, elegant and thought provoking edifice. And at night, like these senses, the Cathedral is illuminated perfectly. 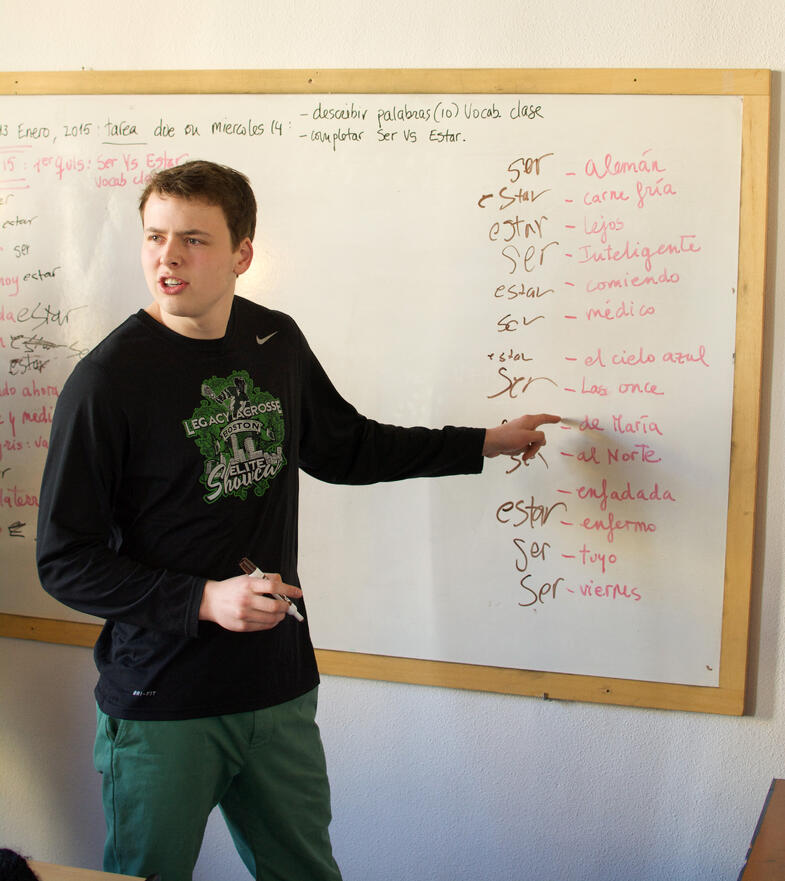 Spanish classes are in full swing. Here Davis demonstrates his understanding of ser vs. estar (two verbs for "to be”!) 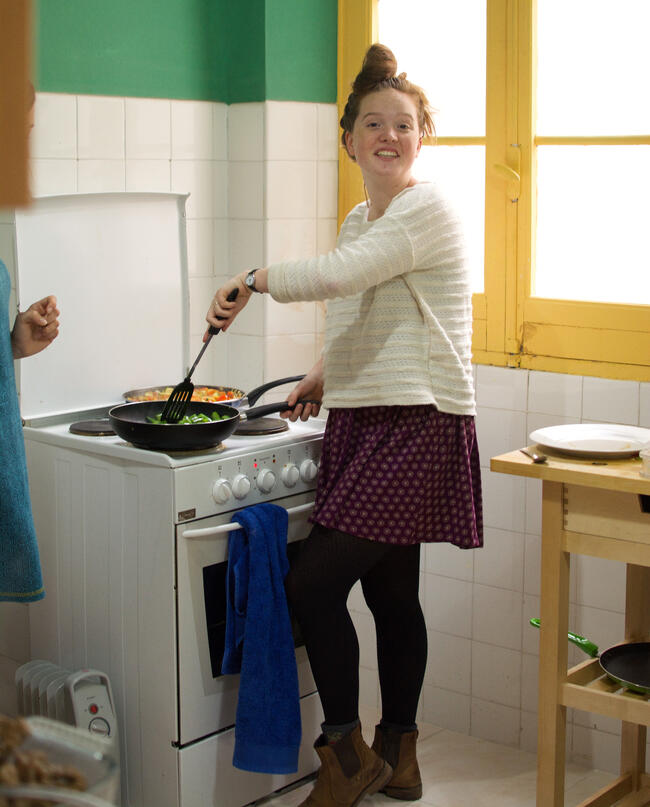 On Thursdays students purchase produce and other goods at Segovia's outdoor market in the Plaza Mayor and then practice their culinary skills by cooking for the group. Here Grace cooks a wonderful vegetable curry dish and sautés snap peas!

Greer chats with niños de Segovia while volunteering at an after school literacy program for one of her afternoon activities. 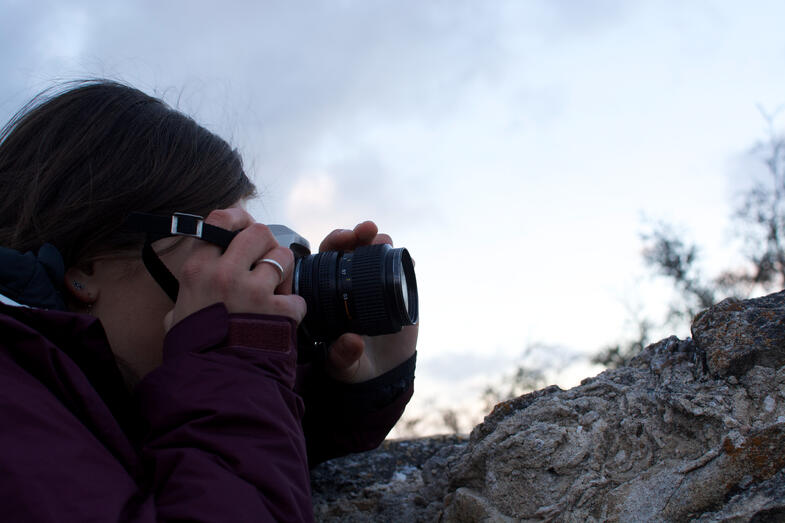 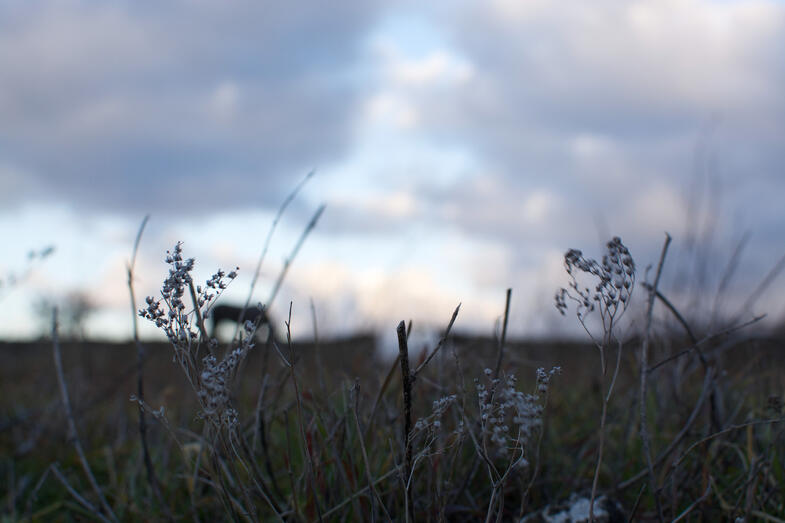