The Picasso Museum, tucked away in an alleyway in Barcelona’s gothic district, seemed at first glance to be an as of yet hidden gem in a sea of tourist traps. Unfortunately that pleasant fantasy was seemingly disintegrated when my companions and I arrived at the Museum proper — the site was swamped in tourists. While we were discouraged, I could make out what appeared to be a number of well-cultured locals scattered amongst the crowd. Surely they wouldn’t be attracted to the saccharine “local flavor” that the countless other “landmarks” around Barcelona had fallen prey to. 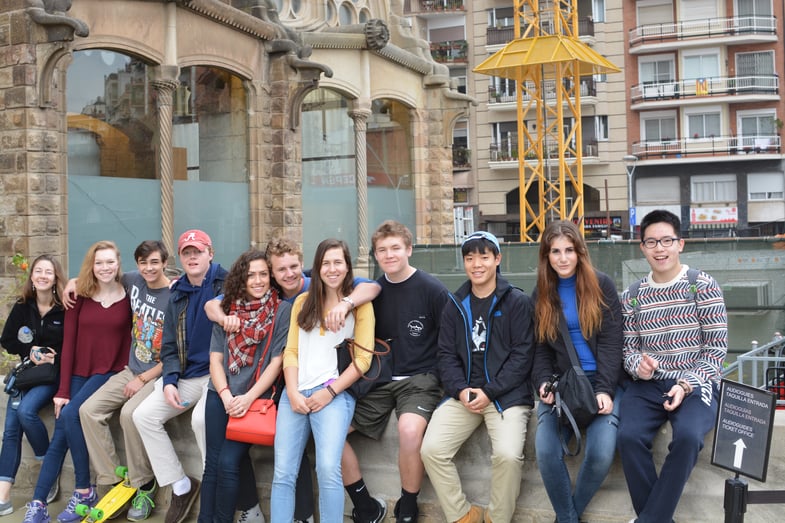 After waiting twenty minutes, packed like sardines amongst the countless tourists, we managed to reach the front of the line. We were informed that the tickets were free but that we would have to wait an hour to see the museum. We amused ourselves by loitering around the gothic district in the meantime before making our way back to the museum. 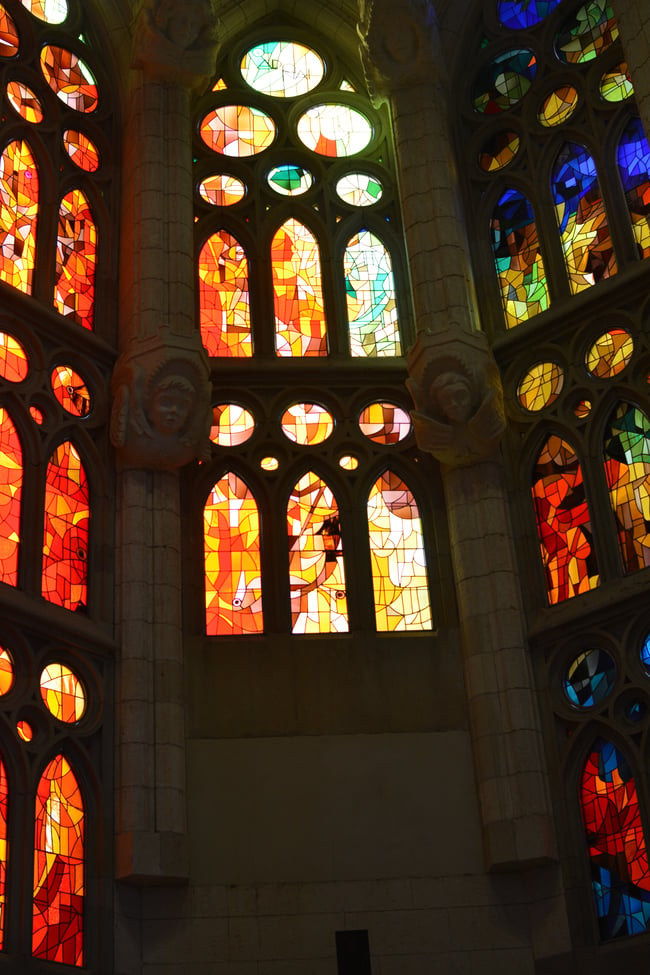 Upon entering I was overwhelmed by the vast amount of history present, here of all places, hidden in a tourist-packed alleyway. Amongst the museum’s impressive collection were pieces that depicted every period of Pablo Picasso’s work from modernism to his works with cubism. It was humbling to see how much he had accomplished at such a young age and how his works had grown more and more abstract as he aged. 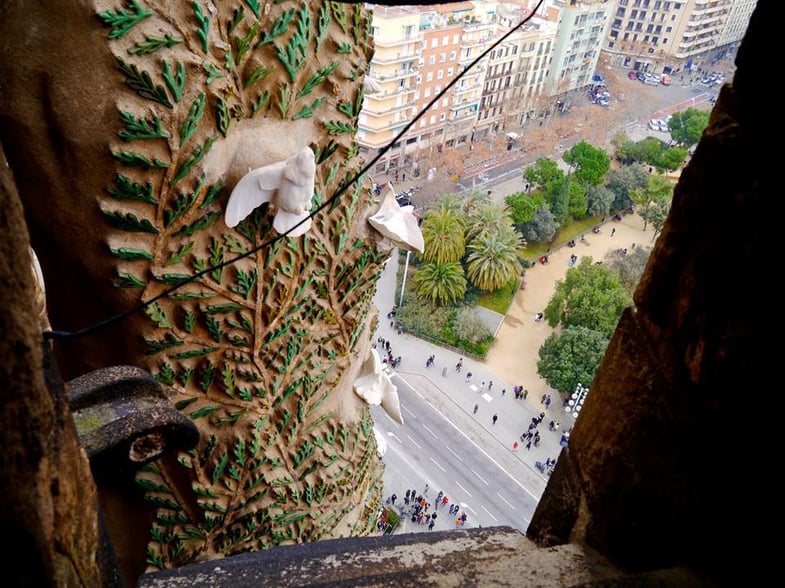 By far the most impressive work I saw at the Museum was “Las Meninas.” This masterpiece of over fifty paintings exemplifies the revolution that Picasso had on the art world. Each piece is a reinterpretation of a painting by Velazquez of the daughter of the King of Spain. Picasso reinvents this single painting in almost every way imaginable. Tearing it apart, throwing it together again, stretching it out and compressing it, adding splashes of color and draining it down to bare black and white. The series shows how one thing can inspire a legion after it. And, like Picasso and Velazquez’s painting, I too am driven to create great things from the kernels of inspiration that I have been given. I see why the museum would pull to it people from across the world, and from the heart of Barcelona itself. Its art is universal, multifaceted and infinitely complex, just like its countless beholders of which I am lucky to count myself one. 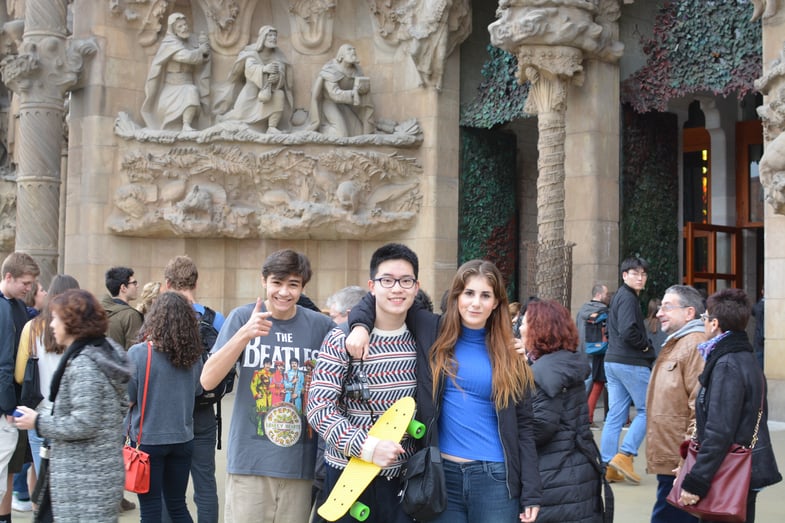 On our first excursion to Barcelona we had the privilege of visiting one of the most famous tourists destinations in the world, the Sagrada Familia, a large Roman Catholic church located in the heart of Barcelona. The church was designed by Antoni Gaudí, and construction of the church began in 1882, however, to this day, the church is not complete due to the lack of donations during the Spanish Civil War. Construction resumed in the 1950s and it is anticipated that the church will be complete at around 2026. Despite it being incomplete, the Sagrada Familia one of the most popular tourist destinations in all of Spain and for good reason.

The first thing I noticed when I arrived at the steps of the Sagrada Familia were the three intricately designed facades: the nativity facade which depicts the birth of christ, the passion facade which represents the suffering of christ during his crucifixions, and the glory facade which represents the glory of Jesus. Each facade had a tremendous amount of detail and paint a perfect picture of each biblical story. The interior of the church made you feel as if you were in a forest and with each pillar representing a tree with leaves, created by geometrical shapes, spread across the ceiling with beams of light seeping through the space between each leaf. We were also able to go up to the top of the church which is the highest building in all of Barcelona. Needless to say we had a pretty good view up there! Making our way down the spiral staircase back to the bottom floor was tough, especially for someone who is scared of heights. Sunday afternoon January 24th, groups of three were challenged with the task of seeking out an important monument, going to the monument, filming a video about the history of the monument, and then returning to the Barcelona apartment by 8:00pm. Annie, Grace and I focused our journey on the Castillo de Montjuic, a military fortress built in 1640 and improved in 1779. We met with Ryan to discuss how to get there, what to do there and our overall plan. 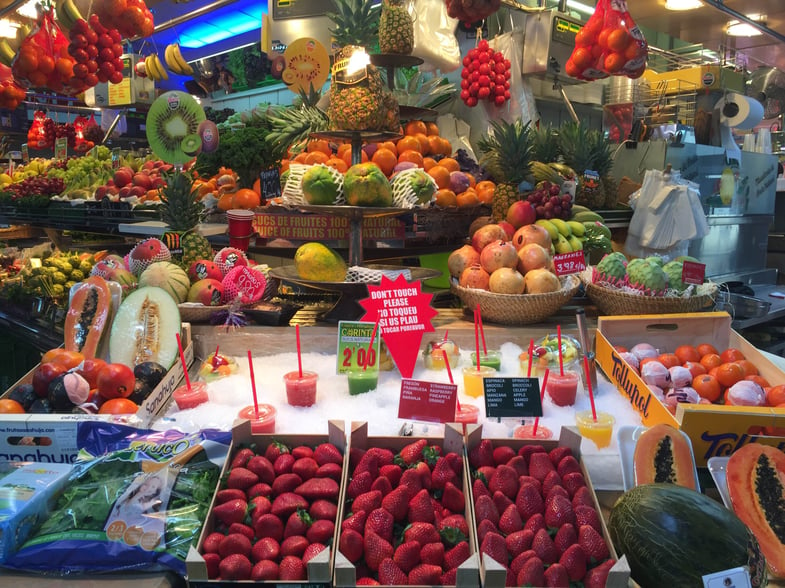 We headed off map in hand and went to board the first of many metros that day.  Eventually we saw Espanya and recognized it as our stop.  We stepped out into the new part of Barcelona hoping to see a small mountain with a castle at the top a short walk away but nothing like that could be seen.  We decided to get lunch and maybe ask our server about the Castillo de Montjuic.  Unfortunately we lost our map. Fortunately we knew the phrase, “dónde está el castillo de Montjuic?” We asked many pedestrians and most of them pointed to a large stone building and happily we rushed to see the castle up close, but, when we got there, it was just a museum and definitely not what we were looking for.  For the next hour we were pointed every which way, wandering through Olympic facilities, feeling like we were on a goose chase, until we saw a gondola.  I had read about a gondola and rail car that went to the castle the day before when researching the history of the Castle.  When we approached the ticket booth Annie asked the woman, “castillo?,” and received a nod; we figured we must be on the right track. The gondola ride was beautiful and we could see all of Barcelona and even the Mediterranean Sea. Finally we had reached our destination and could start our interviews and filming the history of the castle. 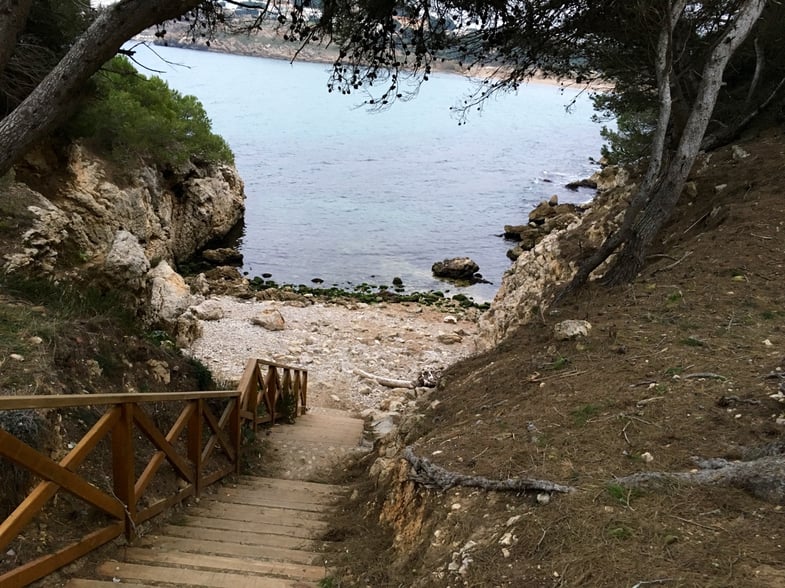 The most important Greek (and later Roman) town and port of Empuriés on the coast north of Barcelona dates from the 6th century BCE. (Photo credit: Miles Kittell) 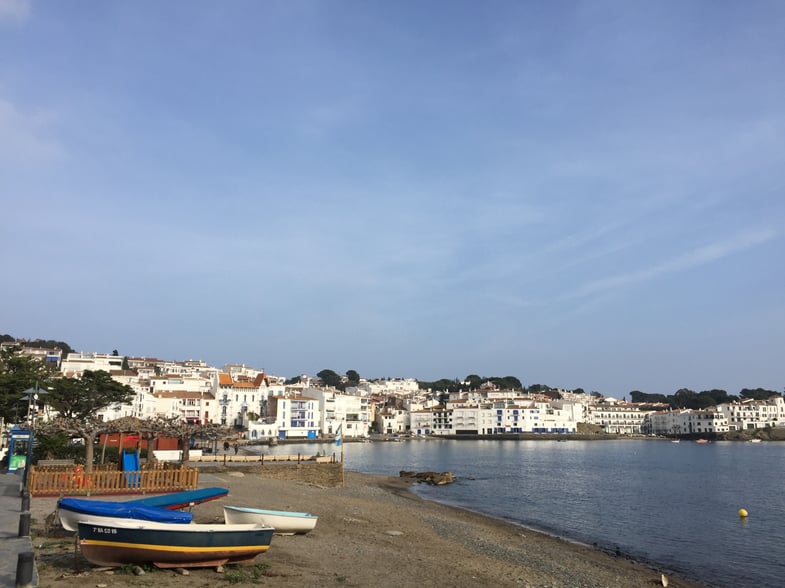 Our hike on the Gran Recorrido (GR) 92 began in the beautiful town of Cadaqués.

I have done a lot of hiking in my life. My dad is a big hiker and he always brought me on his hiking trips. As a result, I know how beautiful mountains can be. I am sorry for my dad, but our hike on the GR-92 near Cadaqués was the best hike in my life. There are no mountains with the view this spectacular. When we reached the beach during our hike to have a lunch, it was the most alluring beach I ever seen. I could not swim because I didn’t have my swimsuit, but I put my feet in the water, and it was refreshing like a bottle of Gatorade after a soccer game. 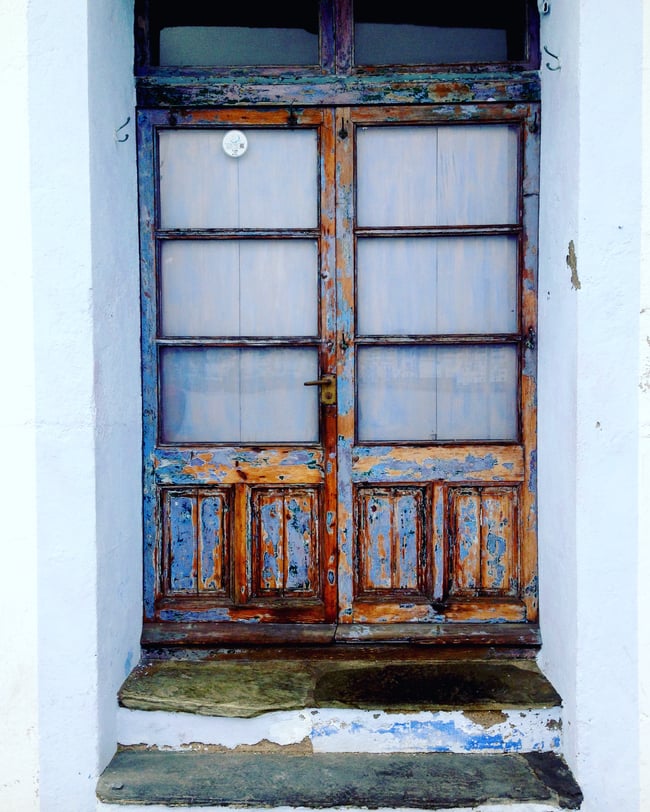 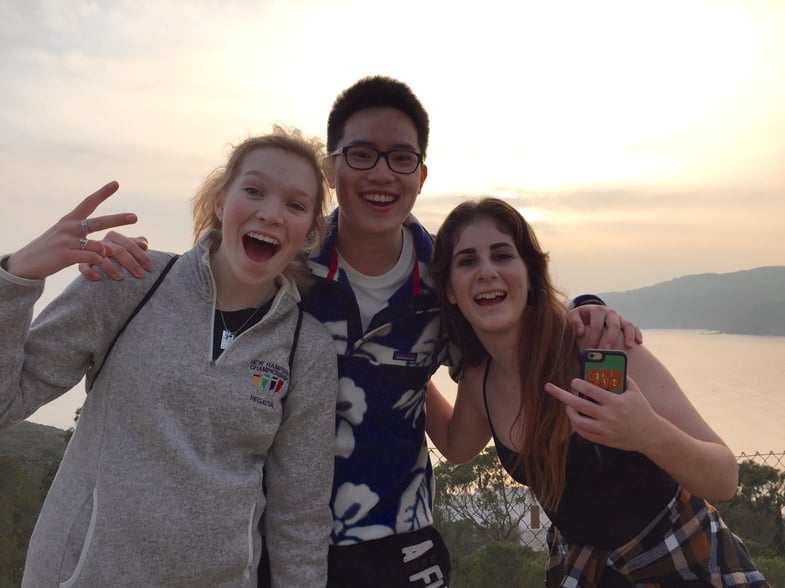 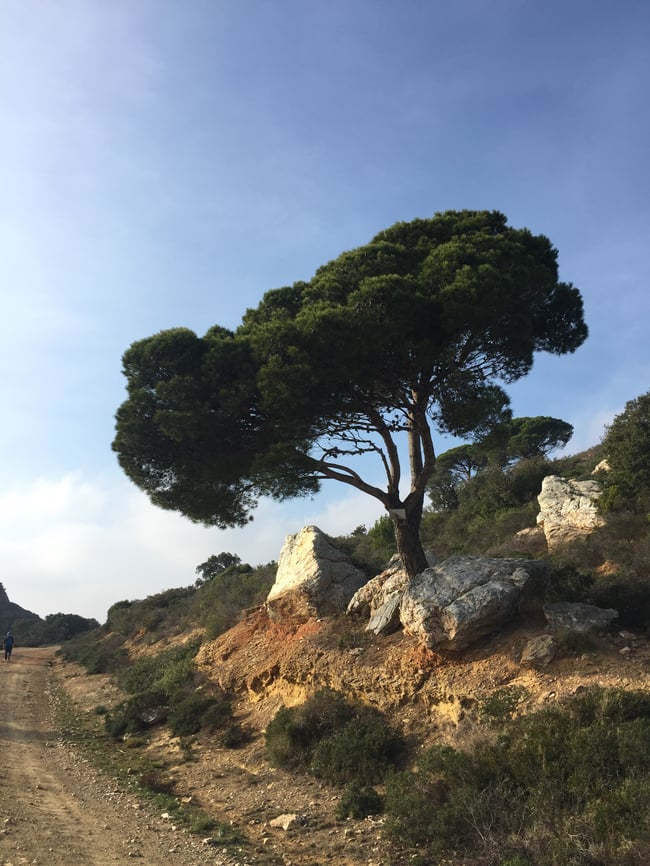 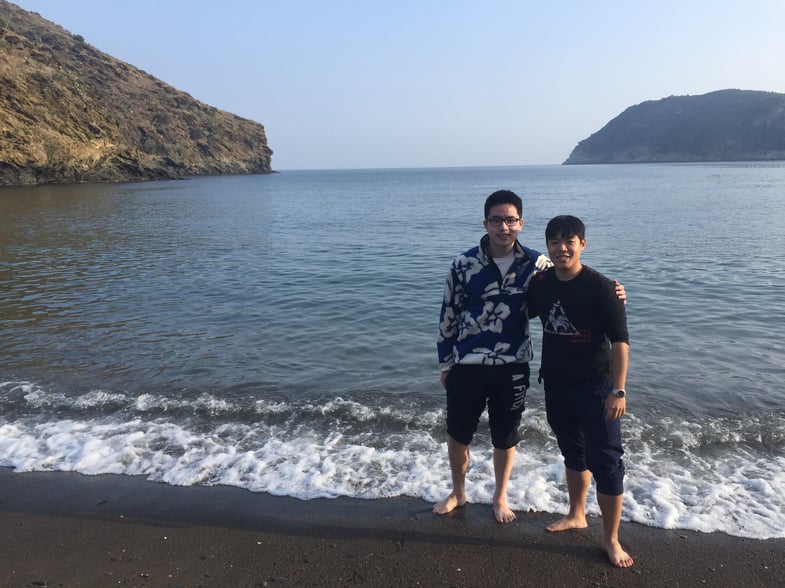 The view got better as we hiked away from the beach, and as I looked down from the hill on the other side of the beach, it was even more lovely. When we were at the peak, Nick Zhou played a song called “On Top Of The World” by Imagine Dragons. At that moment some kind of happiness flowed through my body, and I felt almost euphoric. I not only enjoyed the view but also enjoyed the company of friends that have spent four years at Proctor with me. The combination of the view and being with people that I love made the hiking so good. I promised myself one day I will come here with my dad and enjoy the view together. 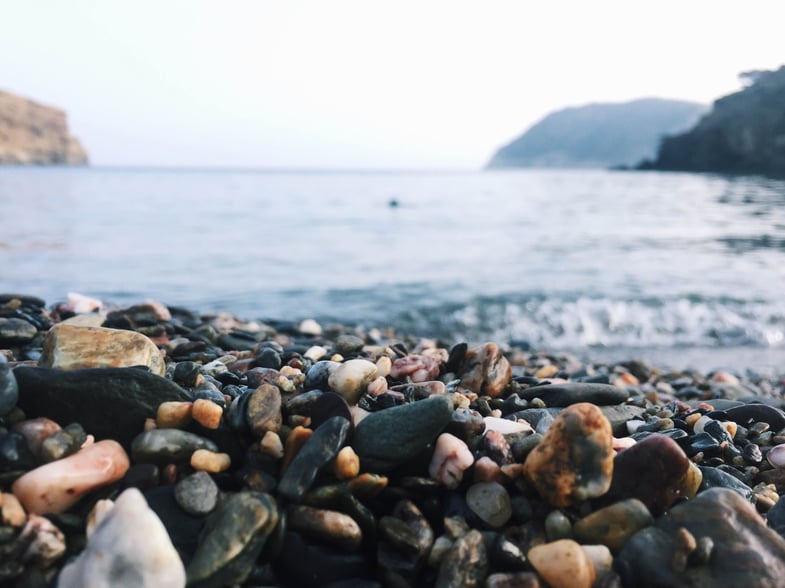 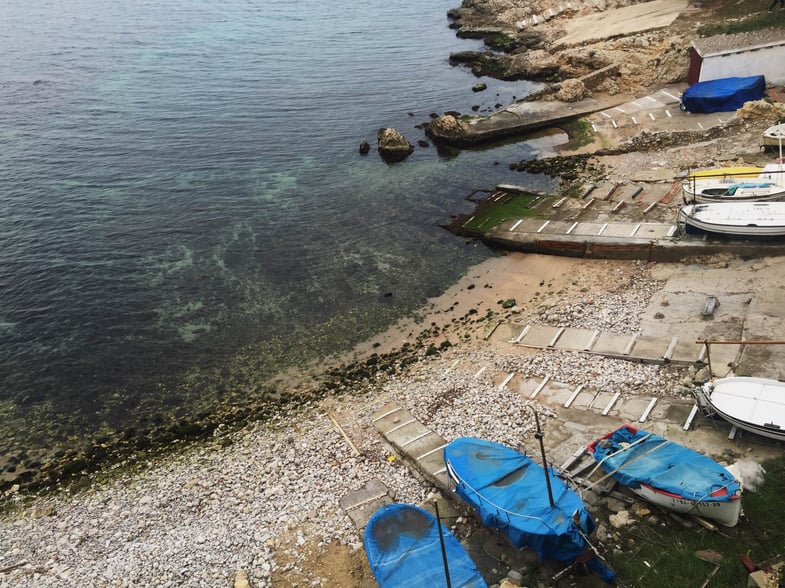 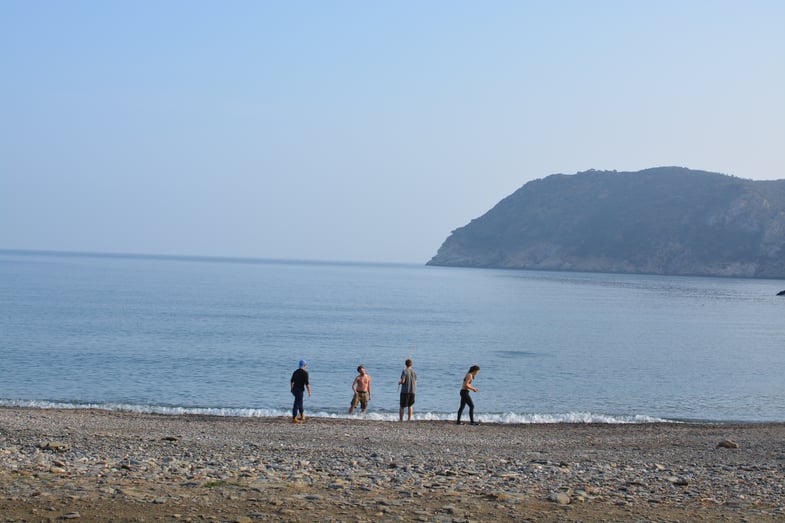 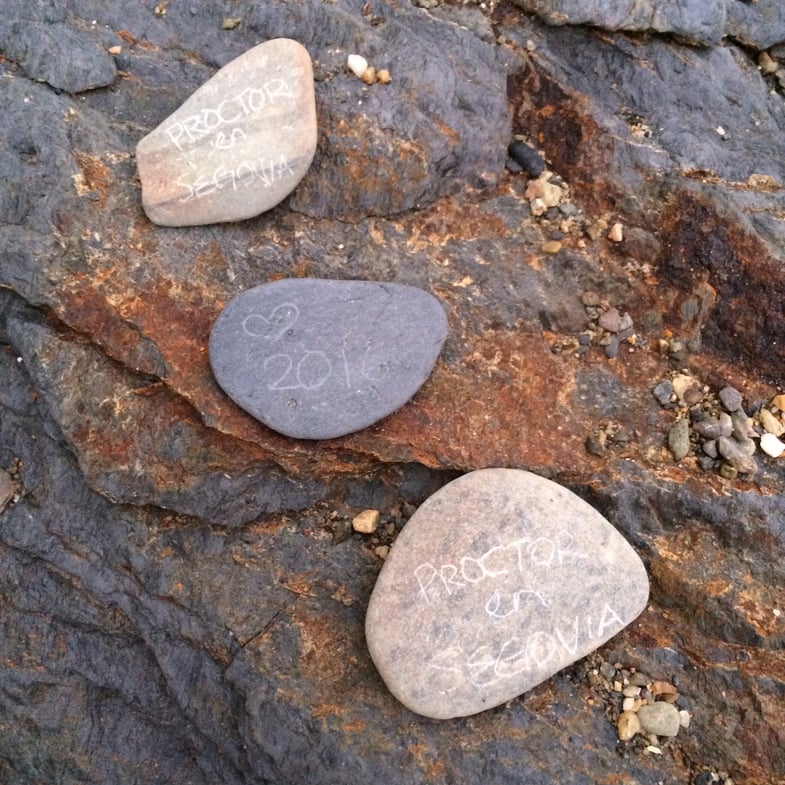