There is a place about halfway up the Calle Real where a stone wall overlooks the city and the wind is ripe with nostalgia. The cute Segovian homes are scattered in all directions, weaving an incredible maze of streets and alleyways and tile roofs. To the right, the sea of buildings suddenly turns to a field of emerald green grass. And to the left, there is a scarlet mountain range topped with snow. 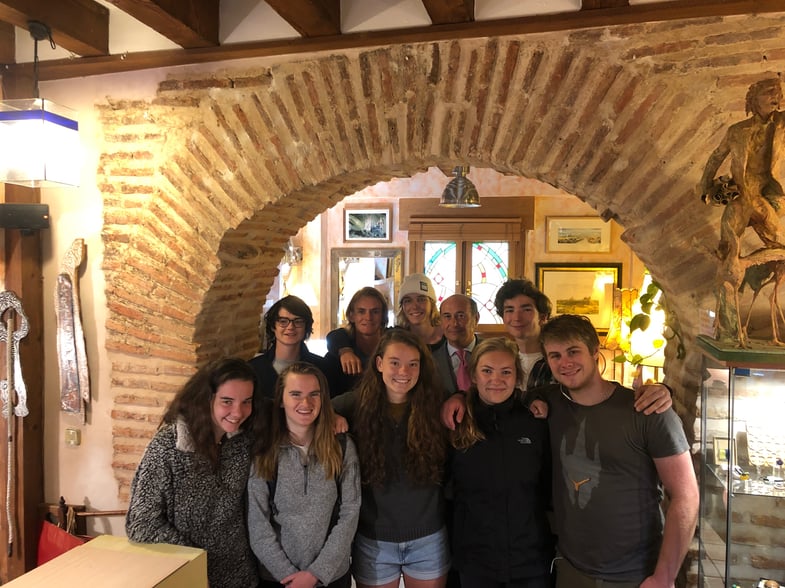 It is one of my favorite views of Segovia because there is a little bit of everything. In fact, the other day as I was walking by, the very sight of it brought tears to my eyes. Because I saw how beautiful it was and I thought back to the first time I walked that street. I remembered my excitement and my fear. Back then, I was afraid that two months would be too long. But now, I’ve come to see that two months is not nearly long enough. I want more time. I need more time. How has everything come to a close so soon? How is it possible to feel so satisfied and so empty all at once? 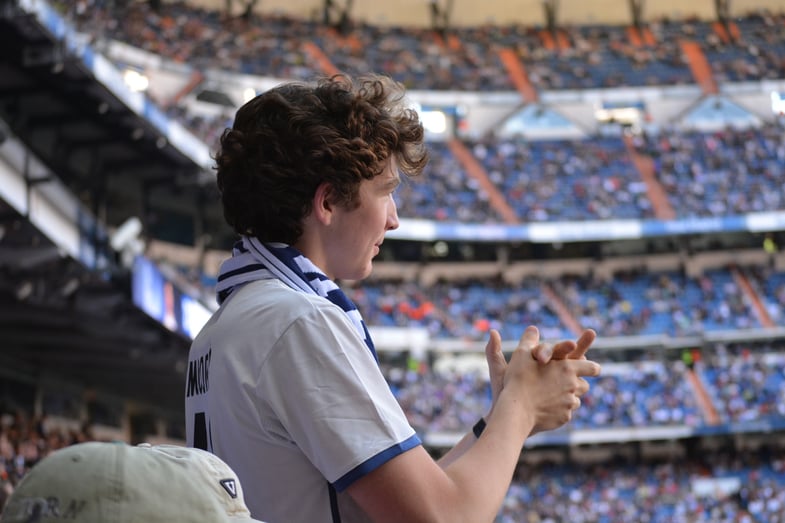 The Battle Within Me

It is no secret that Europeans and especially Spanish people love their soccer teams. I was brought up as a Barcelona fan, and when I say “brought up” I mean my roommate Michael enlightened me on the godlike status of Messi and as a result Barcelona. Now that simple fact is sacrilegious in my host family's apartment. For the first couple of days, they made sure to correct me, telling me Real Madrid is the better team because they don't rely on one good player. So I woke up on Saturday, May 5th a newly converted Real Madrid fan who was brimming with excitement to see my first major league soccer game in Europe. The key words there are “in Europe.” Excitement for major league games in America are quite different. When I watched the United States vs. Costa Rica qualifying match for the World Cup there was a certain excitement and stress, however, the Europeans know how to do a soccer game.

I woke up at nine, packed up, especially making sure I didn’t forget my bocadillos (sandwiches) so my host mom doesn't worry about me not eating enough. This was unlike what happened on the last trip when I left the house and was already on my way on the bus to Madrid when I realized I forgot my bocadillos, and Dad, a.k.a. papa-ry-bear a.k.a. Ryan, our teacher got a frantic phone call from my host mom saying Cole forgot his bocadillos and she was wondering if it was possible to still get them to me. I felt sad and, quickly, very hungry, and that was when I learned a crucial lesson to make sure you have clothes but also double-check that you have food. However, the Madrid game was a very different story. With a full stomach Anya and I watched “Wallace and Gromit” on the bus, and, after we got off in Madrid, we had a couple of hours to shop. While walking from store to store in beautiful, sunny weather, I quickly became covered in sparkly glue and water thanks to Kaitlyn's help and her water bottle. After our adventurous morning, some of us were craving food and caffeine, and, since there was a Canadian in our group, we needed to stop at Tim Hortons. While AJ was sipping on her drink, she quickly came to the realization that it was not the same and remarked, “the Tim Hortons in Canada is much better.” Since a real Canadian said it, I know it must be true. We left the store and walked to subway where we met Rowan and Mary, Laura, Ryan, Mikaela, and baby Lucia.

We all piled into the subway where everyone seemed to be wearing their jerseys and going to the same place, the Real Madrid soccer stadium. There we watched 96 minutes of incredible soccer, Real Madrid vs. Villarreal. Villareal was near the bottom of “La Liga,” however, they certainly made it an exciting game to watch. In the first 10 minutes, each team had scored. Will Hench and I remarked on how much smaller the stadium looked compared to United States stadiums or stadiums on FIFA or TV. Frazer, Johnny and Cole K. were getting into it, yelling and screaming. Cole K. a little bit more than the rest making his own chants. The final score was 3-2 Real Madrid. It was a beautiful, victorious day, but I still like Barcelona more. Don't tell my host parents! 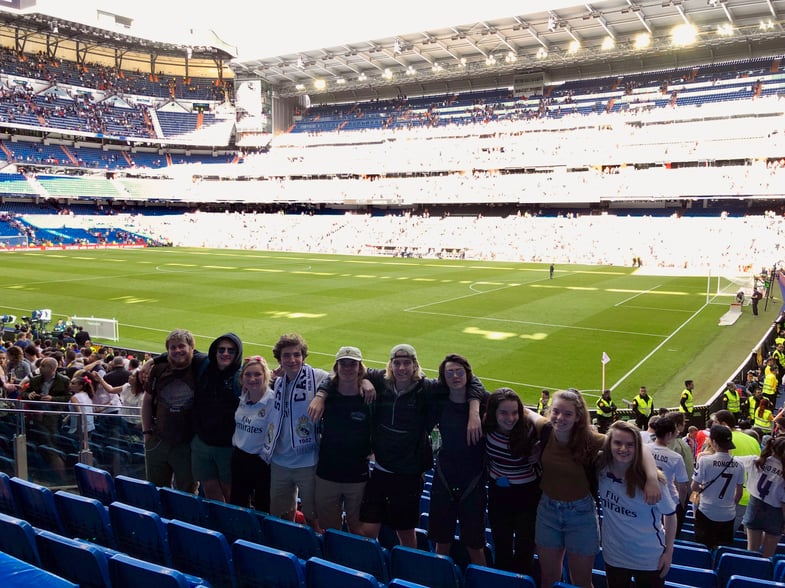 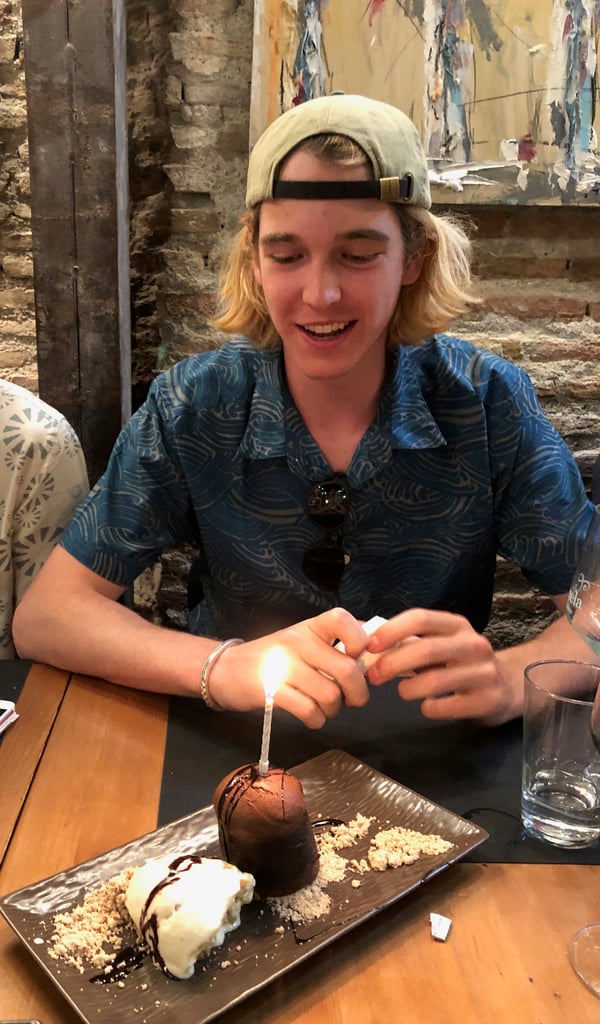 We celebrated Frazer’s birthday during our final excursion of the term in Granada.

For the past two months I have been living in a small city in central Spain called Segovia. The city is a maze of narrow streets with small parks on every corner. Running directly through the city is the Roman aqueduct. Underneath it there are always an assortment of people and restaurants. The house where I have been staying is five minutes from the aqueduct and about a fifteen minutes walk from the school, and a ten minute walk from most of my activities that I attend after lunch. So, that means a lot of walking in one day. And this doesn’t include my free time. What I am trying to get at here is that my shoes have seen a lot and covered a lot of ground!

Students were treated to an impromptu encore at the end of the flamenco performance they attended.

Johnny strikes a flamenco pose on the Paseo de los Tristes in Granada. 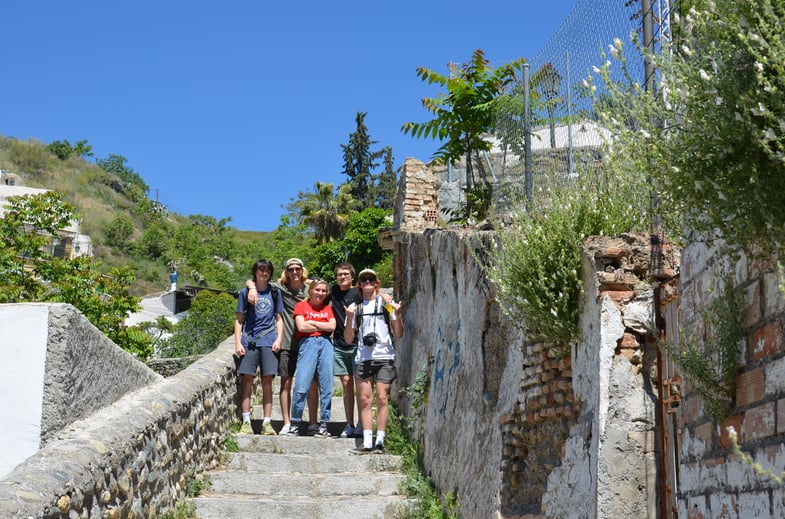 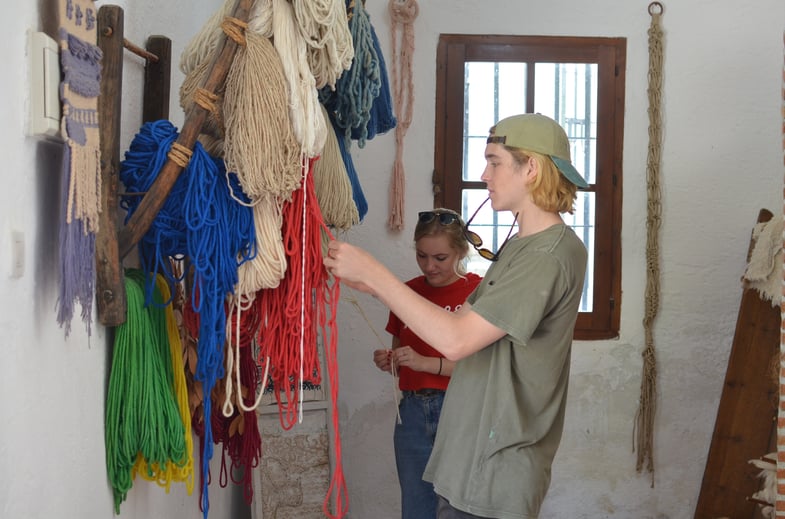 Visiting a museum that explores Romani (Gypsy) history and culture in the Sacromonte neighborhood of Granada. 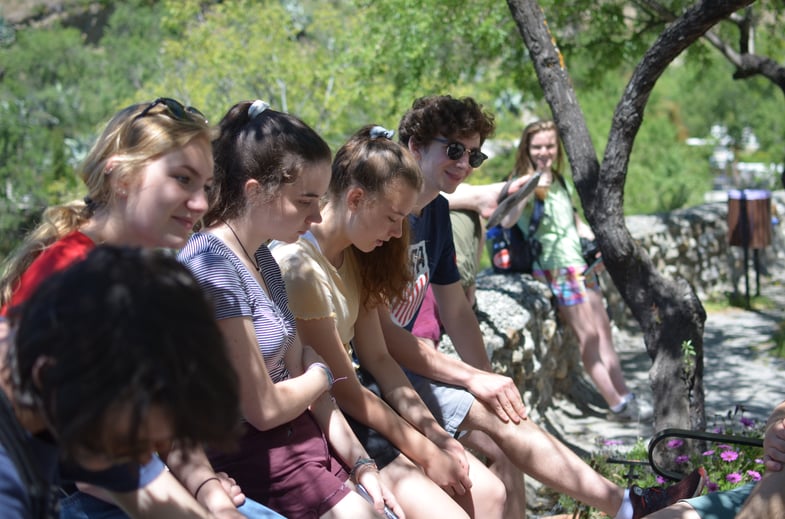 Students listen intently as Johnny presents on the history of the Romani in the Iberian peninsula and Granada. 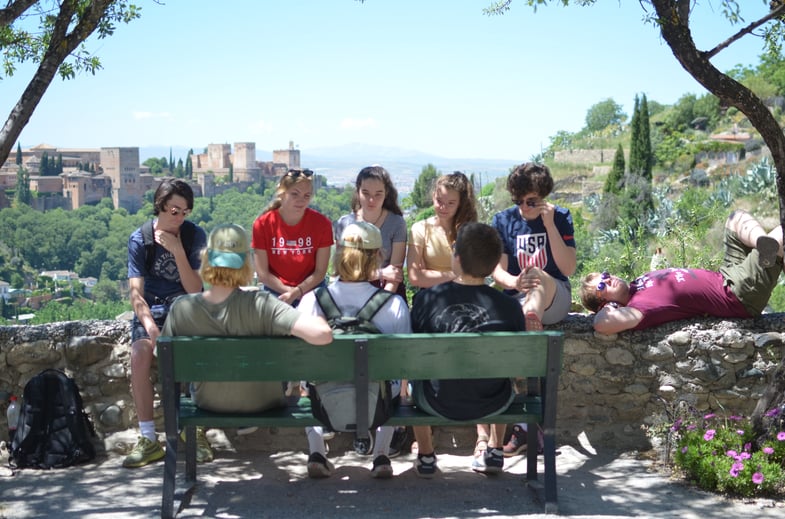 Soaking up the beautiful sunshine with the Alhambra dominating the background. 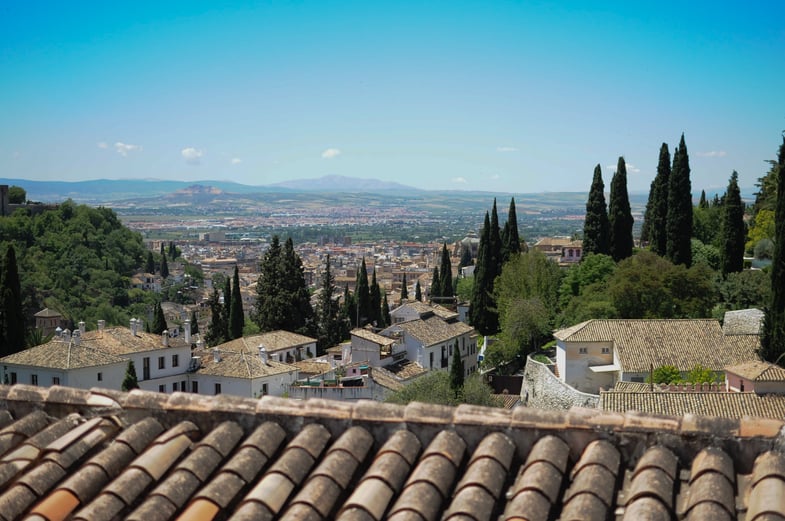 For a long time it never really occurred to me that I was going to need to speak another language. Or that I would be required to sleep in a house with people I didn’t know in a country I wasn’t familiar with. I didn’t process how different the food would be or how different the schedules were. The night before I was about to depart for Segovia, all of these little thoughts were circulating through my mind. It became very overwhelming, but then I realized that so many things could scare me off but I couldn’t let them. 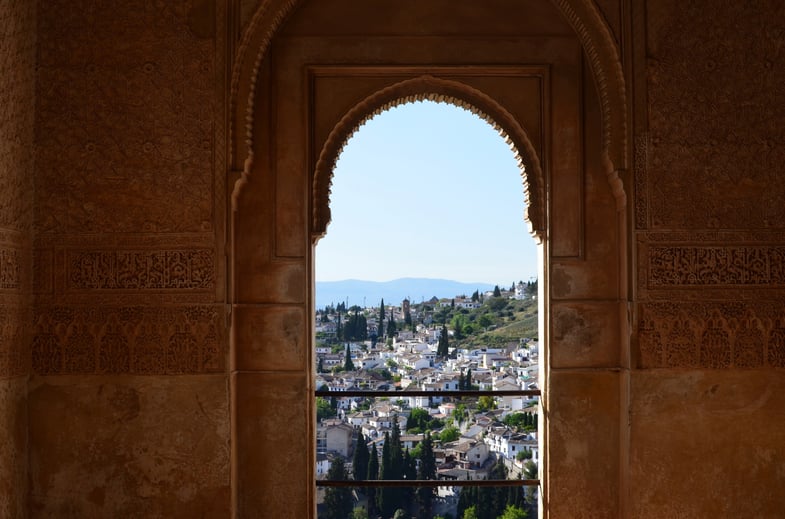 Students visit the Alhambra, a fortress/palace complex and mini-city built by Granada's muslim Nasrid dynasty, principally between the 13th and 14th centuries.

As soon as I arrived in Segovia, Spain my nerves were instantly settled. It wasn’t nearly as scary as I predicted. I always imagined that meeting my host mother and then moving into my home would be the most difficult thing. It was honestly the furthest from that. My family, within seconds, made an effort to include me in everything and to welcome me to the family. My mother took me on a walk after I unpacked my things. She showed me all around and I began to fall in love with everything. Boy am I ever happy that I had been surprised in the winter by Ross Young. Proctor en Segovia has taught me to be comfortable being uncomfortable, and to never be afraid to be myself. I am truly going to miss everything about this spectacular place. I came on this trip in no way prepared but now I can honestly say that Segovia will always be my second home! 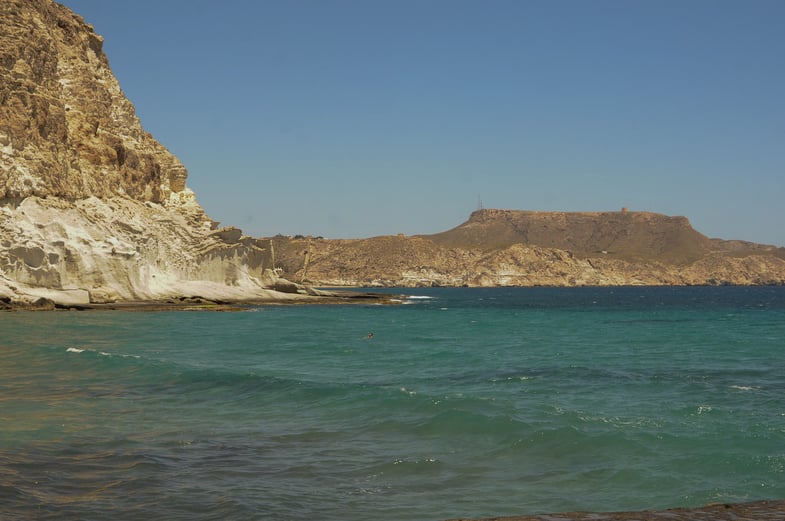 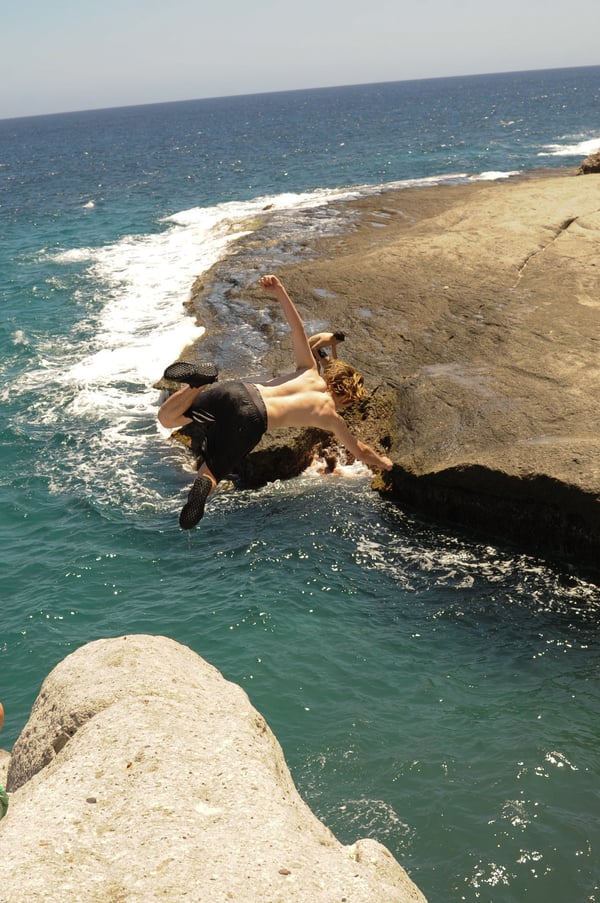 The week that my parents came I could barely contain my excitement to see them and show them my new home. One of the highlights from parents weekend was having coffee and dessert with my host family and my parents. I was very nervous before this because I felt like I knew very little Spanish, and my parents knew none, but it ended up being fantastic. I was able to translate a bit for my parents, and it was a massive highlight for me. It was a crossing of my two worlds, my home in Spain and my home in New Jersey, and I’m very happy I was able to experience that. 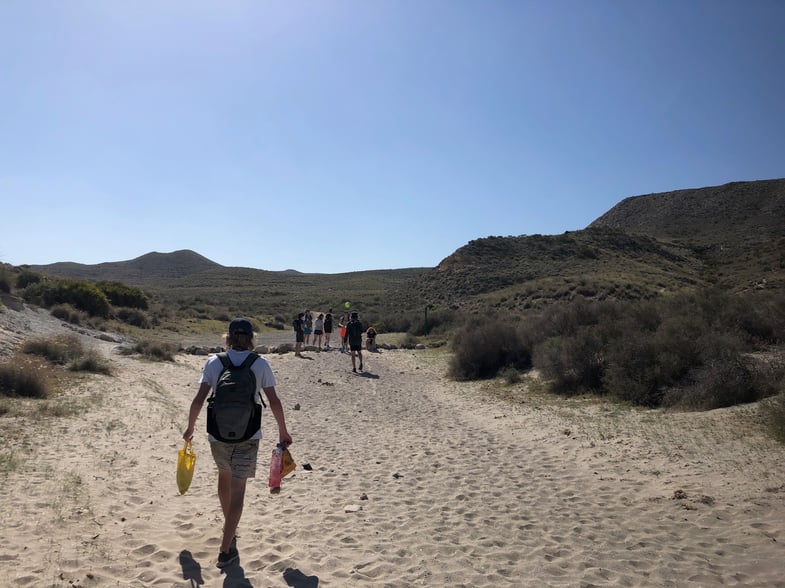 This group of students had the idea to spend some of their beach time picking up trash, mostly plastic that either had been left behind by beachgoers or washed ashore. 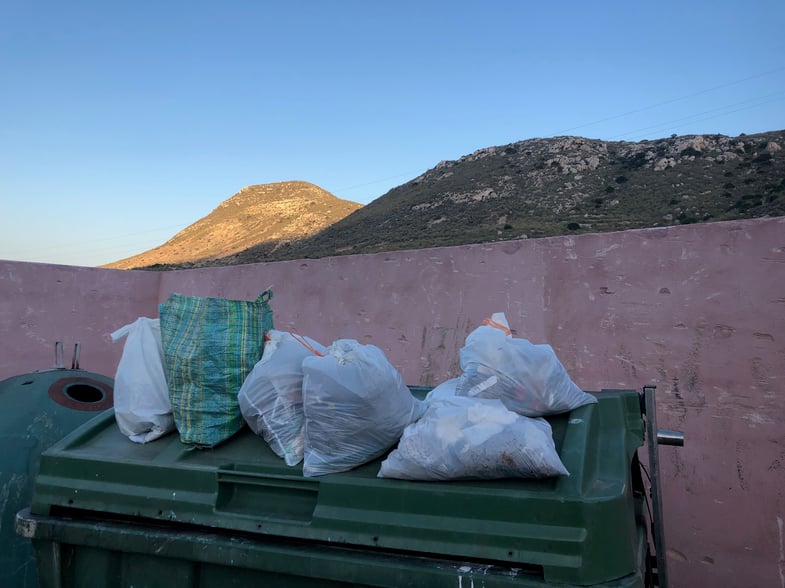 This is the result of around one hour of their collective work. 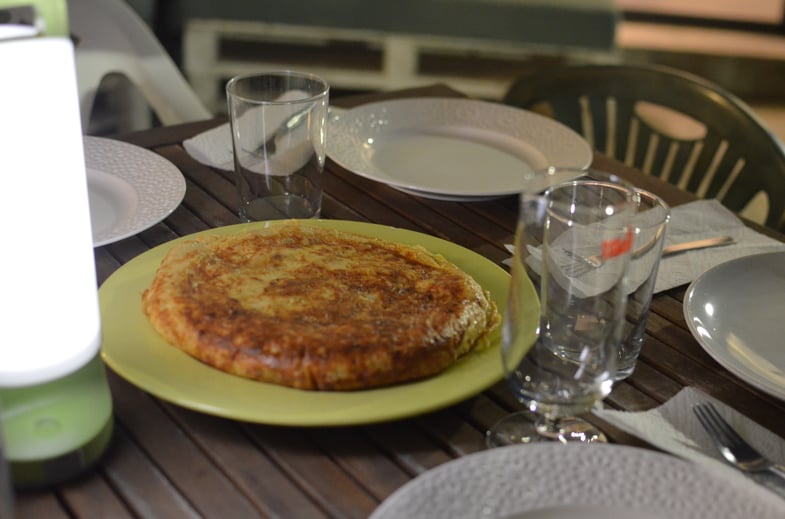 Here in Segovia, people are so nice. People smile at you and say “hola.” Shop owners ask where we are from and if we speak Spanish, and people are very friendly and seem pretty happy. No one really cares what other people are doing, and people just enjoy the day they have been given. The experience I have been given in Spain, has totally flipped my opinion on people in general. People may be cold and angry in some places, but there are many, many cities left to explore. I can visit many places with many different cultures to find a life that really fits me. There is no reason to have a zip code mentality, and I have finally had an experience to show me what my life can be.

AJ and two of her host family members (Ángela and Pablo) pose at our end-of-term celebratory lunch with all of the host families. 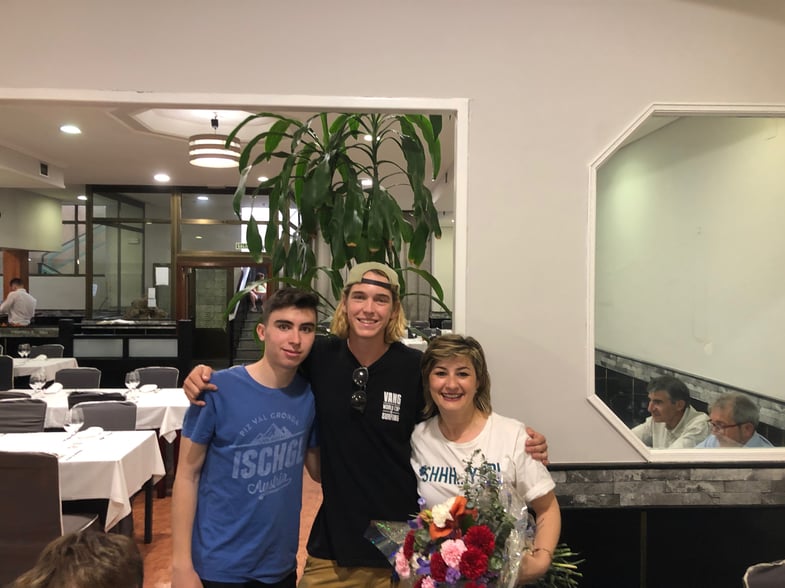 Frazer with his host brother Rubén and host mom Conchi.

Rowan posing with host mom Olga and his parents.

The two months that I have spent in Spain has given me a new perspective on my life. Sure things may not be perfect and may seem dull currently, but there is a bright future ahead. A future where I get to choose, and where I get to finally live the life I have dreamed of. All I can do right now is enjoy the time being as best as I can. At times it may not seem like there is a lot to do, but why can't I create something to do? I spend too much of my home life idle, waiting for something to happen, when I should be out making it happen. There is no reason to let time slip by. It may sound cliché, but I believe my experiences in Spain have really given me a new sense of purpose to just get out and have some fun. When I return home, I want to make a change and my life, and really try to live it to the fullest, no matter how simple it may be. 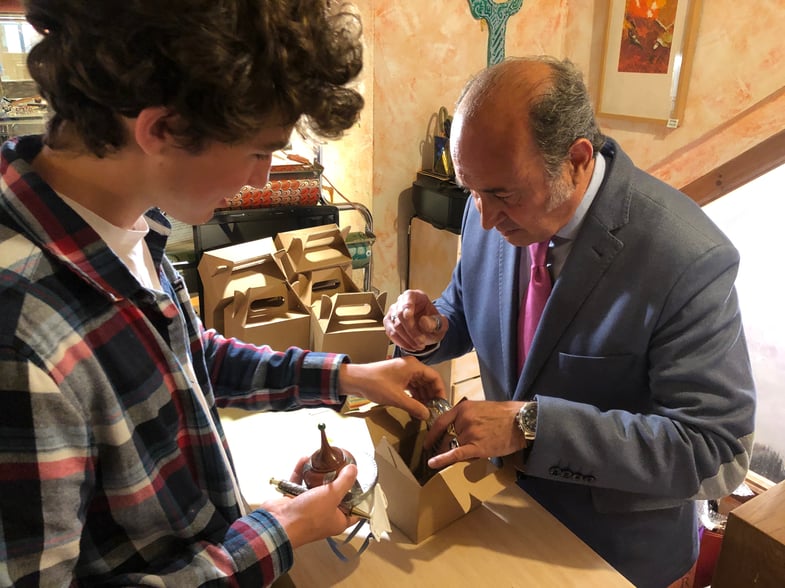 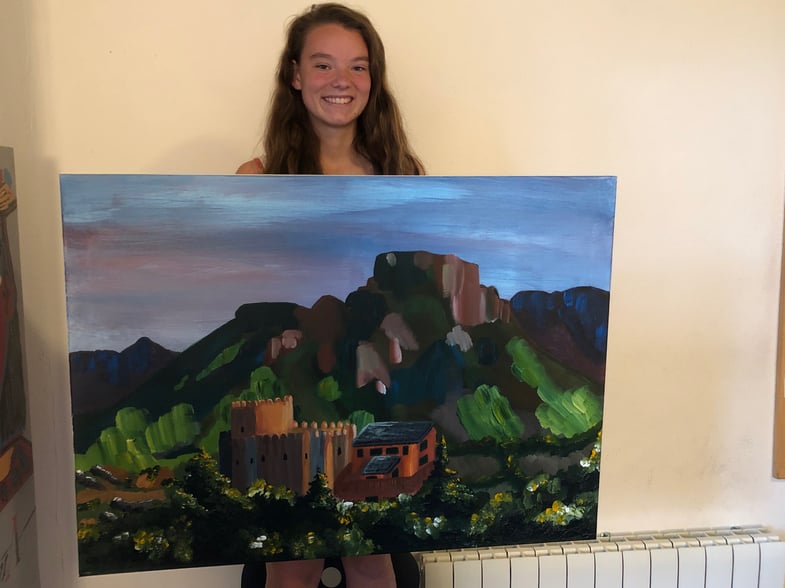 Anya poses with her final visual project for Intro. to Spanish Culture Through Literature and Film class.

And, finally, a photo with the extended Proctor en Segovia family, including visiting alum Gracie ’16.

As they say in Spain, it's not adíos or goodbye it's hasta luego!