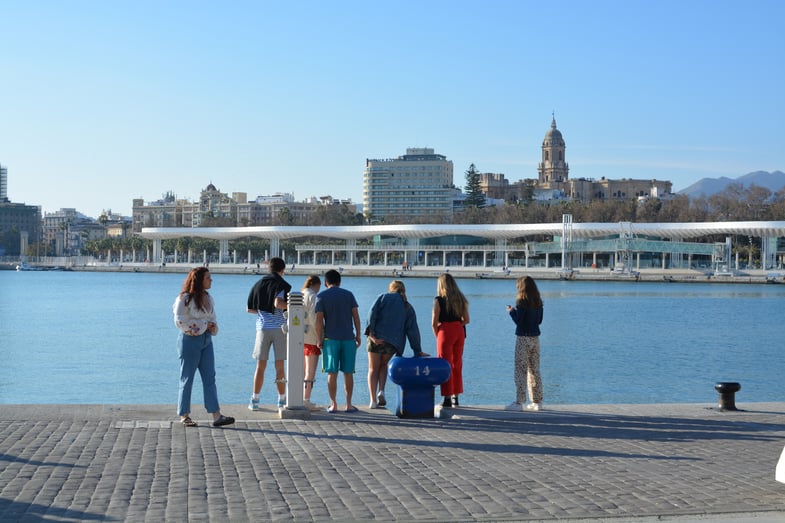 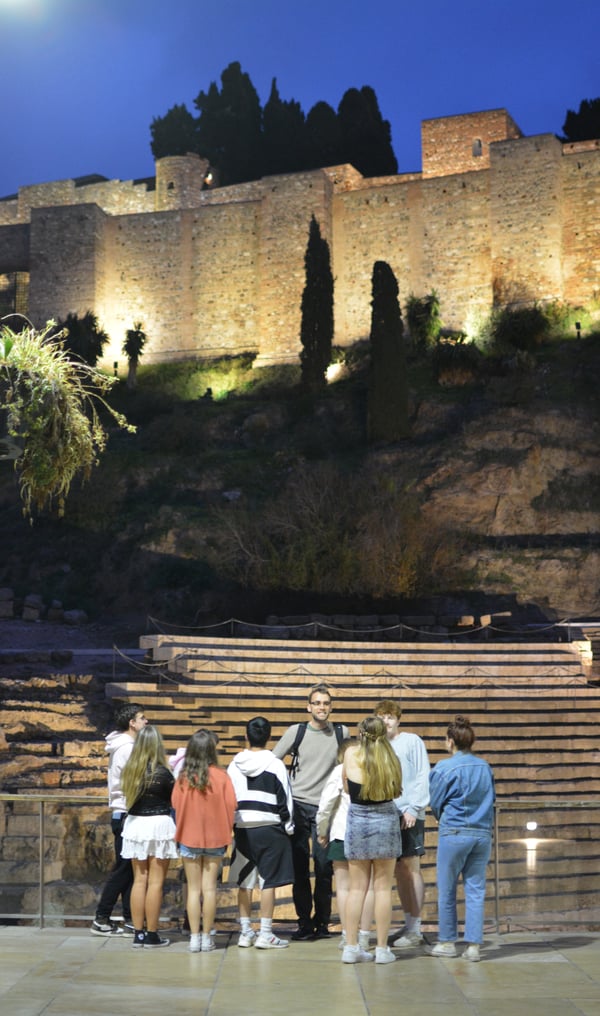 Students discussed the different layers of the history of Málaga (and the southern Mediterranean coast of Spain). Here they are in front of Málaga’s Roman theater.

Our next day began around 10:30 or so with breakfast at a nice place that served great jamón. Afterward, we made our way over to check out the Roman theater. Ryan talked about how the theater had been forgotten about and buried after decades of no use. The Alcazaba (Moorish castle-palace) basically was built on top of where the theater was. Going through the structure there was always a small channel of water running through the middle of the path, and an abundance of flora within the walls of the castle, Ryan explained how this was important part of Islamic architecture and gardens because of the many references to water in the Qur’an and water as a symbol of life and paradise. The castle was built climbing uphill so it could look out onto the coast; it served as a sort of watchtower to protect the trade ships coming into port. 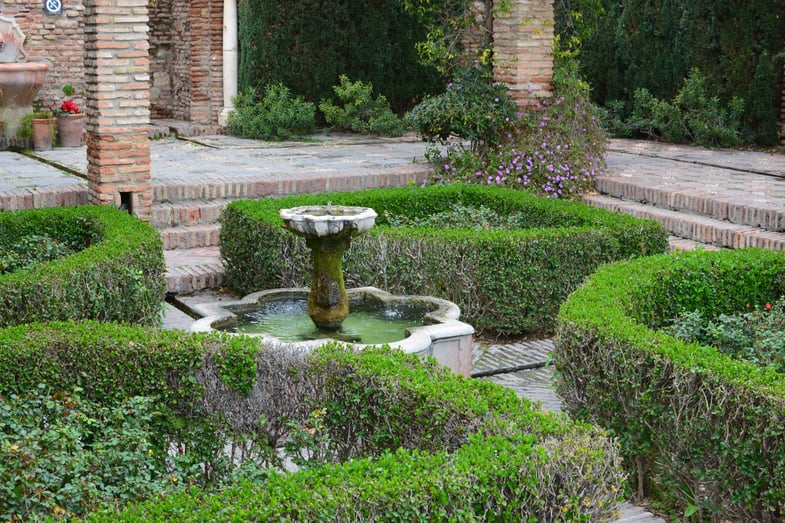 An image from inside Málaga's extensively restored palace-fortress from the Muslim Spain era, the Alcazaba. 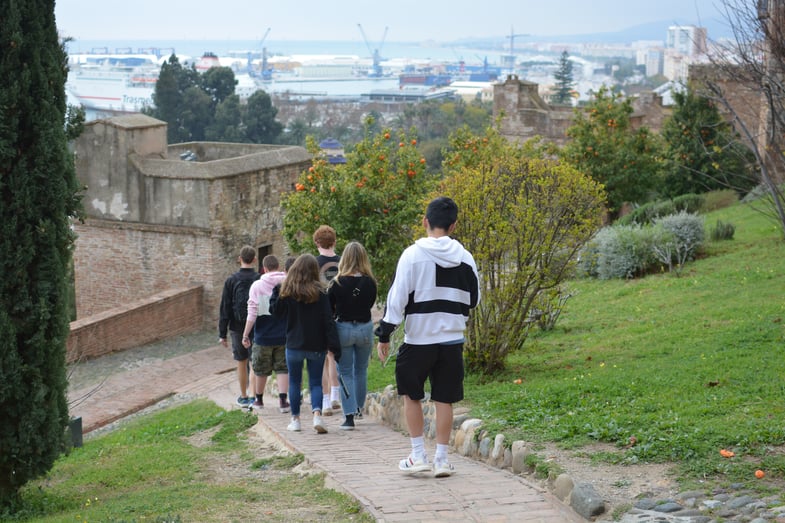 Afterward we all split off for lunch as people went in search of different foods: Moroccan, smoothie and sandwiches, sushi, and McDonald’s. Then we met back at the hotel to decide which place to visit for the afternoon: climb back up to the fortress above the the Alcazaba (Castillo de Gibralfaro), visit the local Cathedral, or explore the Picasso museum. No one wanted to climb back up the hill, and all of us had some interest in the Picasso museum, so guess where we went. The museum had some of the lesser-known works of the Málaga-born artist, from his realistic portraits and still lifes to the abstract style he is well known for, to a few statues he made within his lifetime. 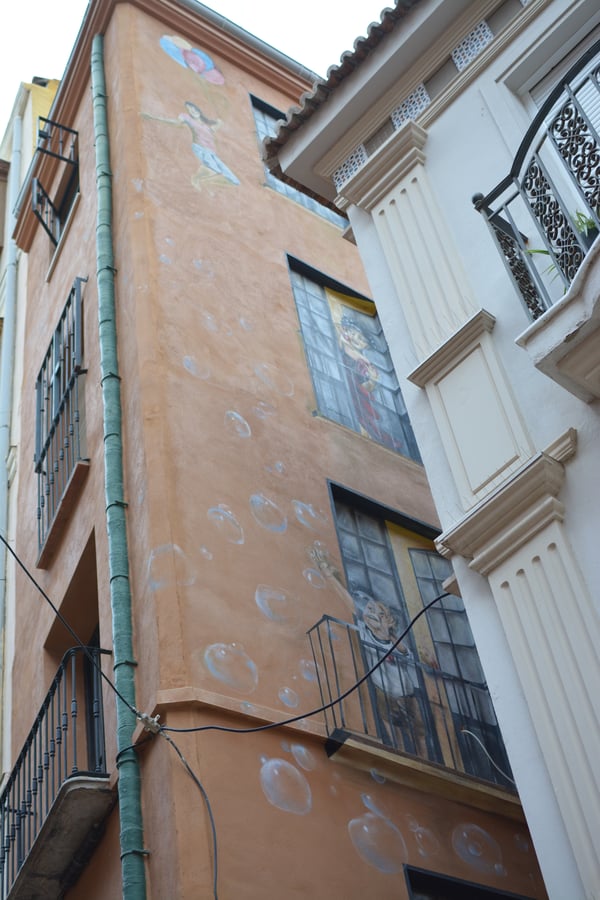 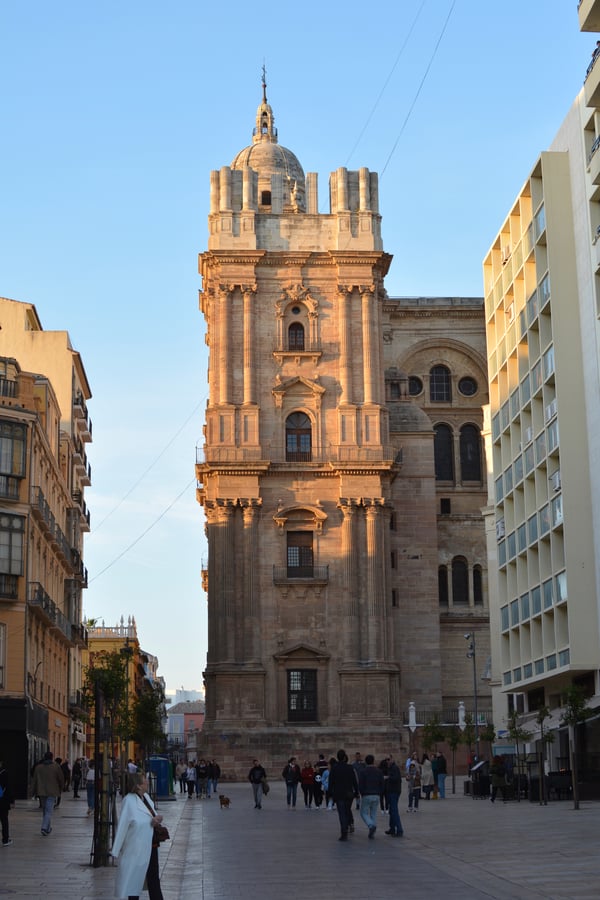 The Cathedral of Málaga known as La Manquita or “the one-armed lady.” Due to loss of funding, construction was never finished on one bell tower.

For dinner that night we went to a small Moroccan (and Mediterranean cuisine) restaurant. It was an interesting commute to get there as we were pushing our way through the first night of Carnaval. Groups of friends would dress up and gather in the streets as bands, performing, dancing, and singing at the end of each block while large groups would gather around them. Some corners even had small stages set up for these groups. The costumes were definitely interesting, a few group having incredibly elaborate ones, and all ages took part in the Carnival from grown adults to kids not even in high school. Some groups seemed to be very well known in Málaga residents, a kind of a local celebrities. Once we finally got to the Moroccan place we had a wonderful dinner where I think Parker and I accidentally ate each other’s meals, but both were good, so it didn’t really matter. We finished our day with more gelato and headed back to the hotel. We ended up staying an extra day in Málaga due to some bad sushi which the group didn’t mind. We spent our final full day in Málaga getting to explore the city at our own rate and going out for lunch. In the afternoon walked as a group down the pier and to a beach where Minh and Parker actually went swimming. Others wandered on the beach and the accompanying rock jetty beside it. Our final morning in Málaga was quick we packed up, left our things in the lobby, got breakfast, and then jumped in the car for a two-hour ride into the countryside. 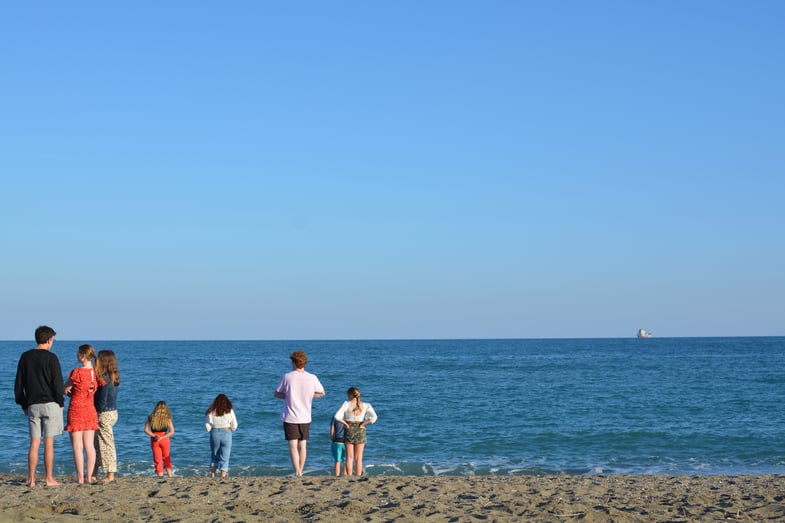 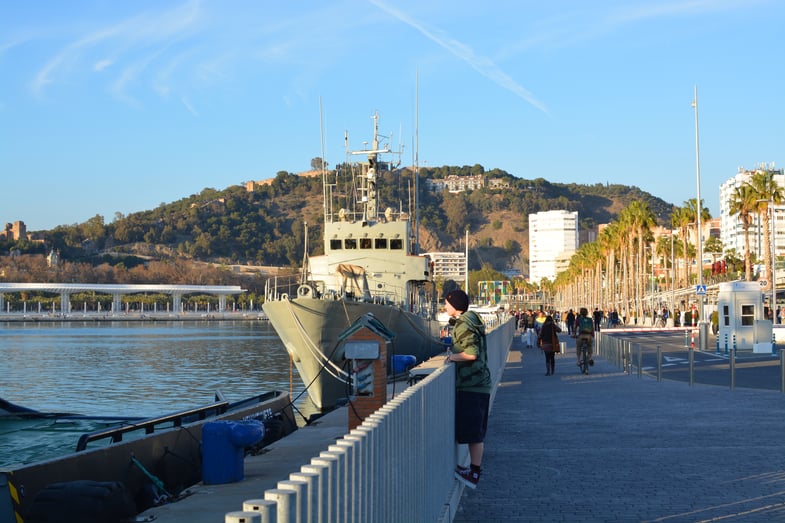 Driving to the house that we would end our last trip with was a bittersweet time. Many people in the group were excited to go from a city to a house. This house was very different from our last house that we all stayed in. It was a very modern and a very simple house with no internet connection, which made the majority of the group go stargazing on the roof where some fell asleep.

On the first day after a long drive we stopped in the small town of Frigiliana. The town reminded many people of what they thought Greece would look like. It was mostly white with grey stones and blue. 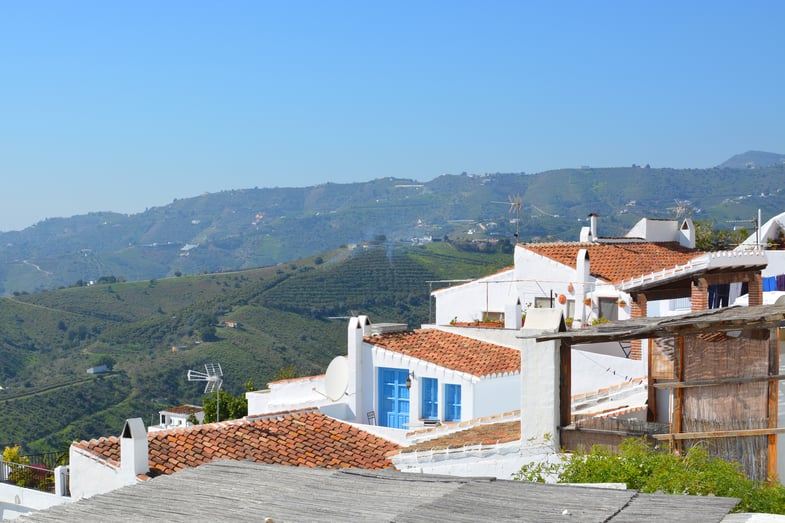 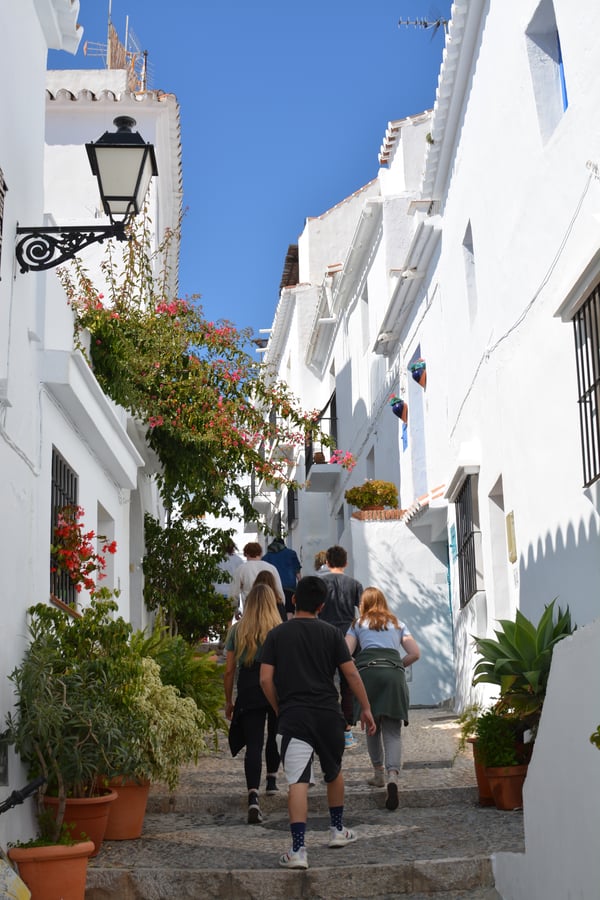 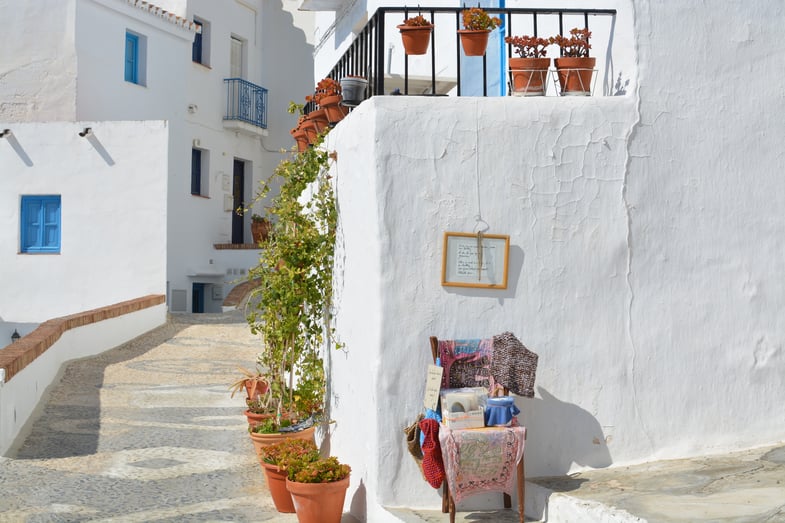 Our glorious second day was all about adventuring to new places. The group went on a hike to a beach that it seemed like only the locals knew about. The water was colder than the day before, but Cha and Parker cliff-jumped into the cold water. This day was all about relaxation which meant that people took naps and listened to music on the beach. Feeling the warm sun on our skin that have been covered most of the winter was quite a refreshing feeling. 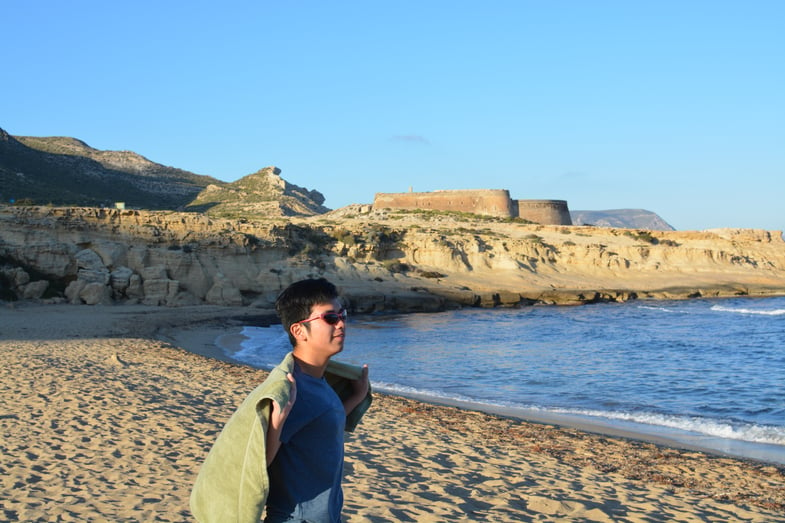 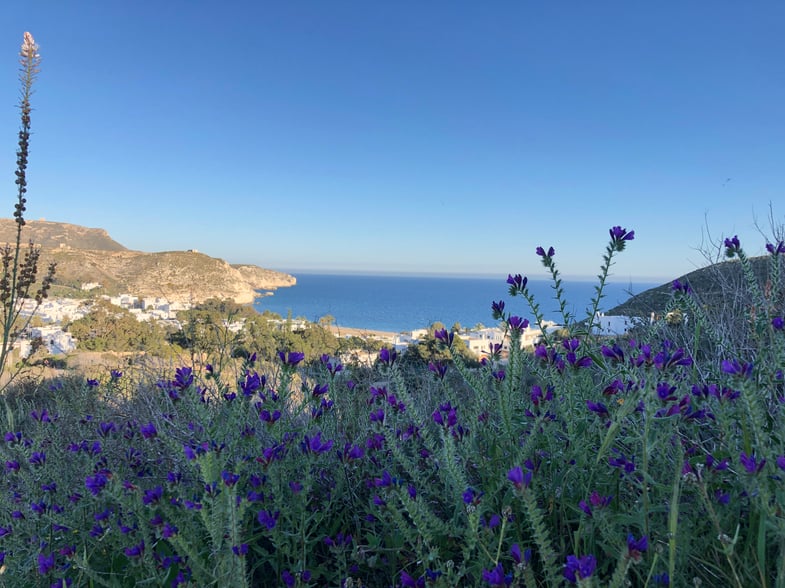 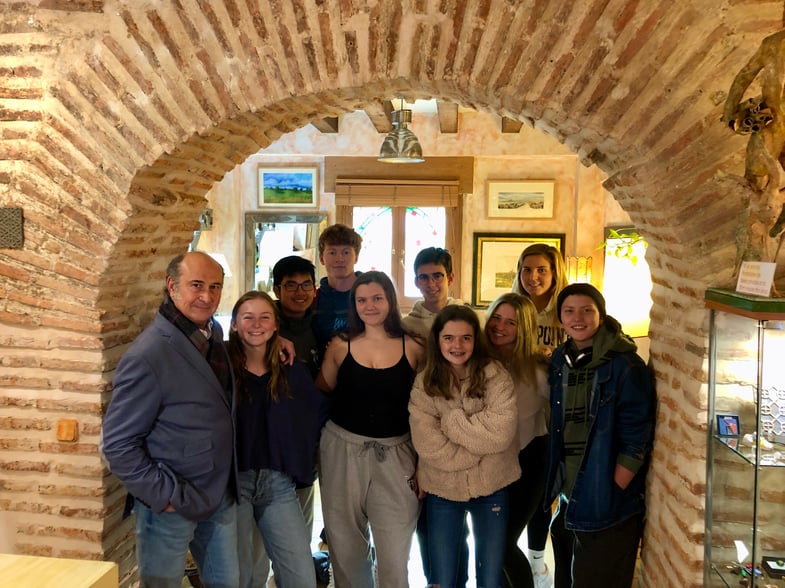 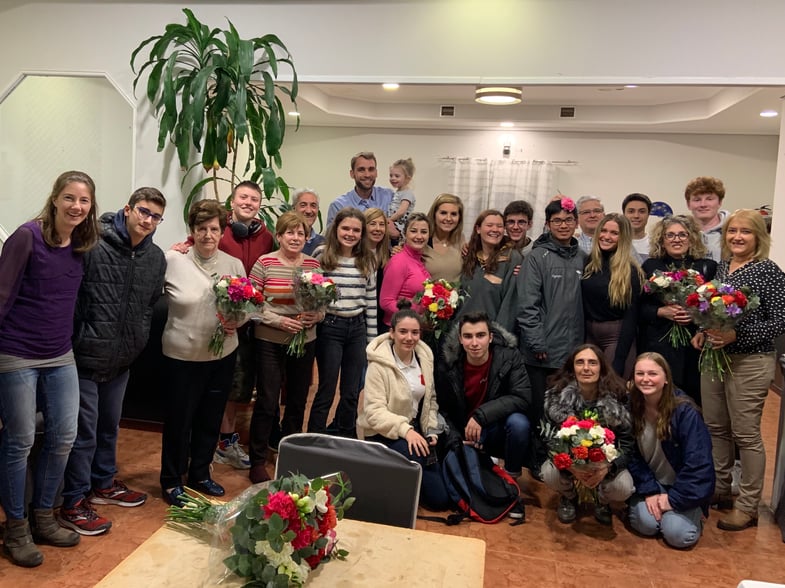 And with our wonderful group of host families.