Our first day in Segovia was tumultuous. We landed early on Tuesday morning in Madrid excited to see Ryan and Mikaela. As most of us did not sleep on the red eye from Boston Logan, it was slightly difficult to be as enthusiastic as they were. To increase our fatigue we were thrown straight into a barrage of Spanish from our host families. Communicating in a mix of English and broken Spanish we tried to convey that we desperately needed a siesta (nap). After this, most of us only woke up for dinner and slept through the night to the following morning. Better rested, but still somewhat disoriented, we all converged at the aqueduct for our first full day in Segovia. Looking up at the ancient Roman water slide the group became excited for our time abroad.

Inspiration for Disney or not, Segovia's Alcázar is magical. 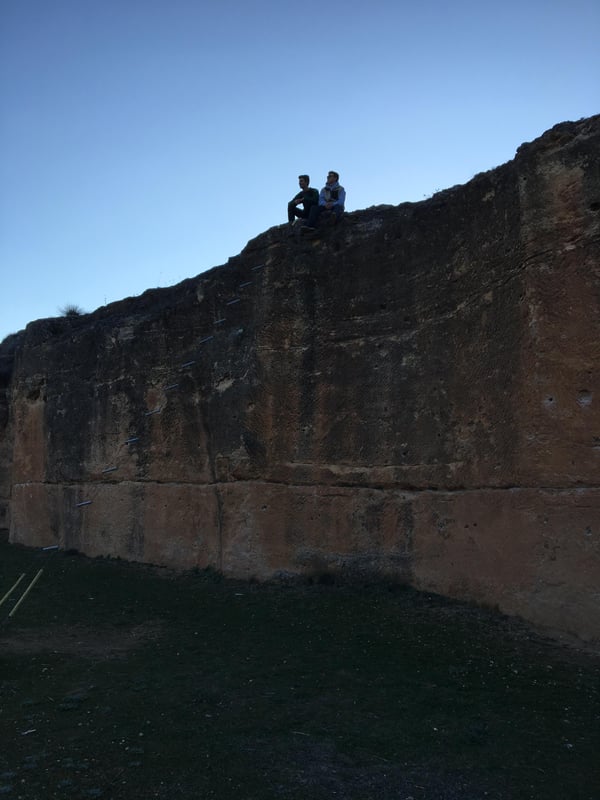 On a Thursday night the whole group signed up for cooking class. Laura, one of our teachers who travels with us on trips, is a spectacular chef and ran the class. While half the group made smoothies and prepared appetizers, the other half prepared ingredients for paella. We diced onions and peppers. Next, we sliced sausage, pork, and chorizo. Of course, it wouldn't be paella without seafood, so we deveined shrimp and chopped calamari. We put all of this into a paellera with rice and water, and waited in anticipation for our delicious meal while we snacked on tapas produced by the first half of the group. 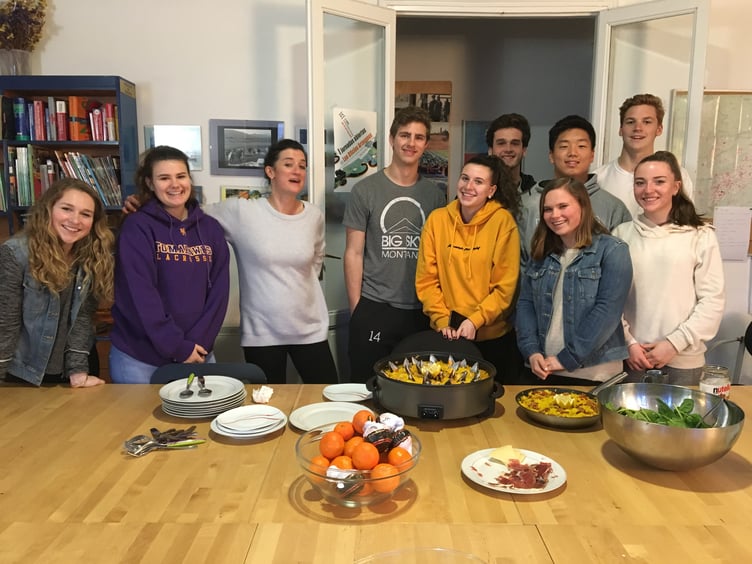 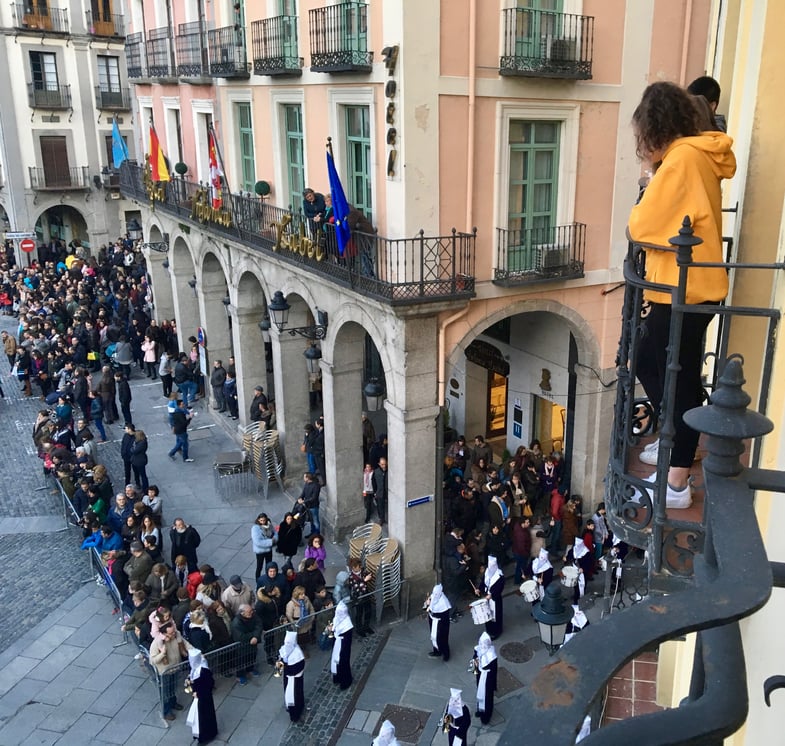 Last week we all experienced our first Semana Santa procession. The first group of participants we saw were dressed in white and red gowns, with pointy white masks that covered their faces. The purpose of this was to hide their identity because they were repenting for their sins, a very personal deed. These outfits are called vestidos de Semana Santa and the head coverings are called capuchones. Each person that participates is a cofrade, and when they come together in a procession it is called a cofradía. The leader of each cofradía held a staff with a religious insignia, and they are called the estandarte. Following the estandarte was a group of musicians, playing the drums and wind instruments. Earlier that day we saw many people practicing for their part in the procession. Eric’s host father and sister were both in the procession; the 12 year old girl was playing playing a flute-like instrument. It is a truly amazing spectacle to see children around the ages of 5 and 6 begin to participate in such an elaborate religious ceremony.

In this culture repenting for your sins is no easy task. Participants in the rear of each group walked barefoot, holding enormous crosses made out of two logs. These people are called penitentes, and most of their crosses were personalized to fit their desire. One mans cross was wrapped in chains. Some of the wooden crosses looked clean and well trimmed, while others looked as if they had just come from the forest. In between the estandarte (standard bearer) and the penitentes (cross bearers) was a religious statue/sculpture on top of a float. There were many people under each of these floats that you could not see, but it was their duty to keep it moving with the rest of the procession. These people are called costaleros. The processions lasted for hours with dozens of different groups and floats coming from the churches throughout Segovia, through the aqueduct, Plaza Mayor, and ending in the Cathedral of Segovia. They took place over the course of two or three hours on Thursday night and continued on Friday morning. Spaniards and tourists came from all around the city to watch the ceremonies, making it very difficult to navigate the small, ancient roads through the crowds. It was an unbelievable sight to see, and, apparently, the processions in Seville are much bigger, perhaps the biggest in the world. I think I can speak for most of us when I say that the processions opened our eyes to such a historic, cultural ceremony. Never have I seen a people express their commitment to their religion in such glory. Watching the processions is something that will never leave our memories. On Thursday night Maria and I were doing a little bit of window shopping. It was frigid for my expectations of winter in Spain; I even wore the grey gloves that my grandmother gave me for Christmas. We wandered into the sunglasses store for a second time in two days. The lady who worked there recognized us immediately and spoke in English at first, but then I found this confidence in myself that I did not know I possessed. I asked the women if she would speak Spanish with us. She was willing and excited to help us buy sunglasses but also be a part of our Spanish immersion journey. She was probably in her early to mid-twenties and dressed very fashionably. She gave off a great energy. She was relatable and easy to talk to which impressed me because I did not know that much Spanish. We discussed how long we will be in Segovia and what sunglasses looked good on Maria’s face. It was a whole new concept to converse with someone I didn’t even know. My confidence level in my Spanish speaking ability went through the roof, and, as I became more and more, confident my fluency and speed progressed immensely. Because of the confidence I gained from my experience speaking Spanish with the woman in the store, I have started to speak Spanish with everyone in every shop that I go into, even in Madrid where many of the employees at stores would speak English to me. I’m so happy I took that chance and asked to speak with the saleswoman in Spanish, because it has opened up a world of opportunity.

The first-week scavenger hunt has students explore the old quarter of Segovia and then learn to use Segovia’s local bus system by taking the #1 bus to San Antonio El Real to have café con leche or colacao in a 15th century former monastery built by Isabel of Castilla's half-brother Enrique IV. 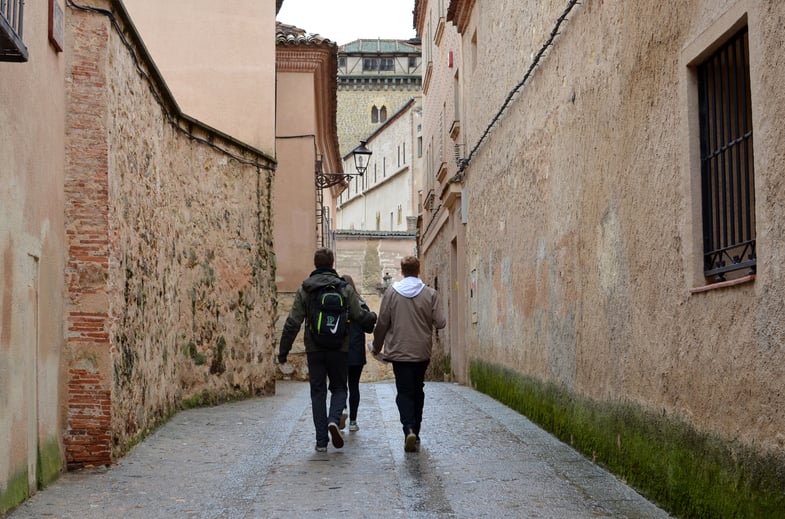 The light laughter of a carefree child drifts into air in the Plaza Mayor. The excitement of the start of spring is clear on the innocent face of the child. Possibilities of playing futból in the plaza. Passing the ball to their friends, avoiding the adults walking by. Curiosity resonates in the tone of their little voices. There is always a question to be asked by a child. The world is still so new, there are still so many carefree days to be had. So many new things to see and experience. It’s in the days of warmer weather that I wish to be a young child again.

The sun heating my face in contrast with the bitter wind. The birds singing their songs in the midday sun are the second thing that resonates in the Plaza Mayor in Segovia. The first is the chatter of all the people walking around. For the first time in the days since coming to Spain it feels like the start of spring and not the harshness of winter. Each mother, child, father, and dog feels the sun on their skin. Their smiles, like the sun, light up their faces. It is the start of warmer weather and the start of new adventures.