As soon as I stepped into Sevilla, I felt as if I was in a fairytale. Everything was so clean and pretty. The sky was blue, the birds were chirping and, my favorite part, it was warm and sunny. After getting to our hostel Ryan took us to a burger place after countless complaints about how hungry we were. 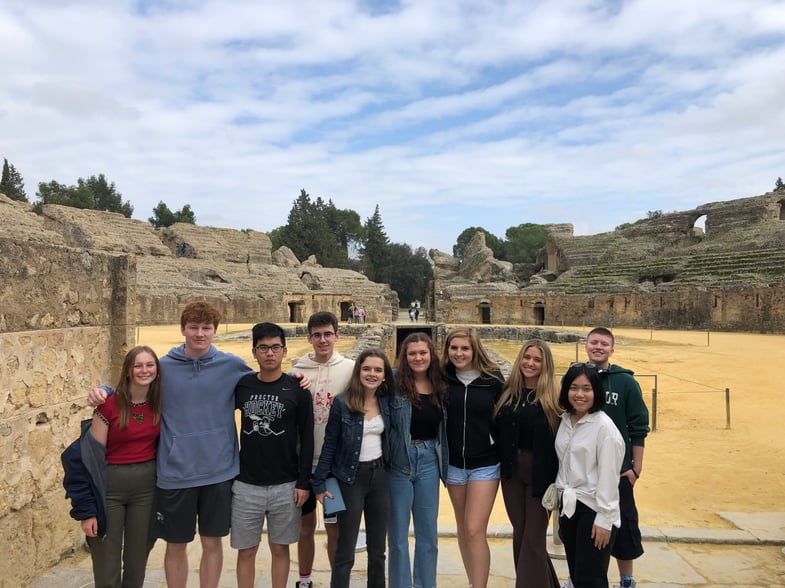 The first place we visited in Seville was the Plaza de España of Sevilla. It was one of the most beautiful things I'd ever seen. There was a man in the square blowing huge Lucia sized bubbles, so of course we had to go over and join the fun. Lucia enjoyed it as well. 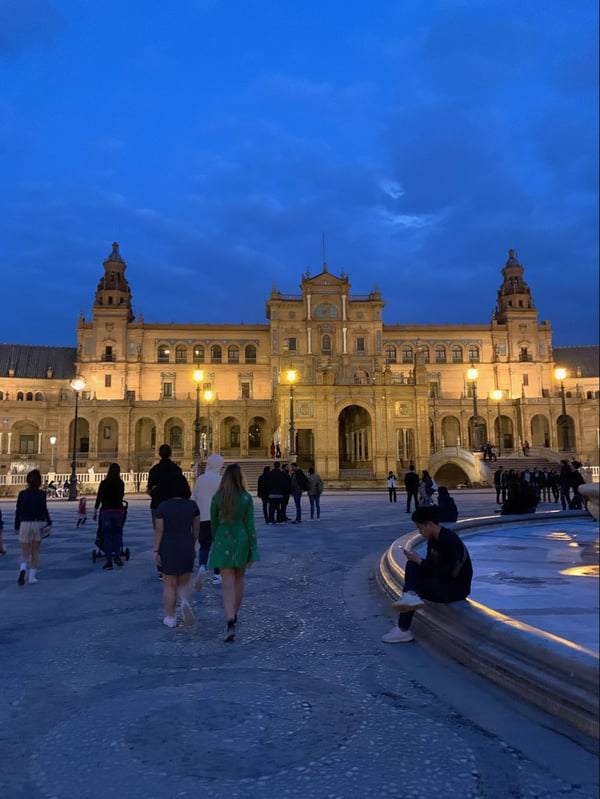 After a brief history lesson from Ryan and lots of bubble popping, we had a little bit of free time to walk around and explore the city. We ended up staying in the Plaza and taking in the view, then heading back to our hostel for some rest before our next activity. 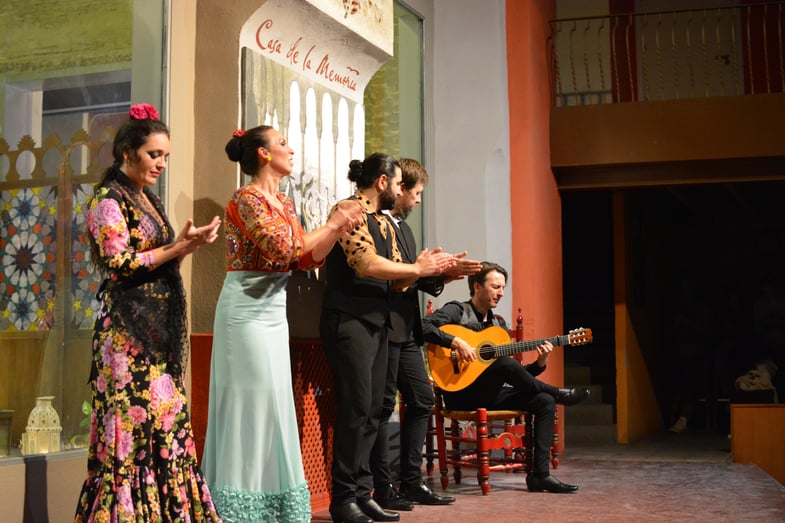 That night, we went to a little theater close to our hostel and watched a traditional flamenco performance (guitarist, singer, and dancers). The dance was so beautiful and I was so mesmerized by the way they moved the entire time. They wore beautiful outfits and the music was fun and intense. Saturday morning we woke up to a breakfast of chocolate croissants which everyone was very happy about. We then got on a bus and drove about thirty minutes to the Roman city and amphitheater of Itálica. We learned about how the Romans built this huge amphitheater for entertainment that was free to everybody. It felt so cool to be standing on this structure that was still mostly intact despite being built so many years ago. That night, after traveling back to the city, we had a tasty dinner and after, enjoyed some gelato which became one of our favorite activities. 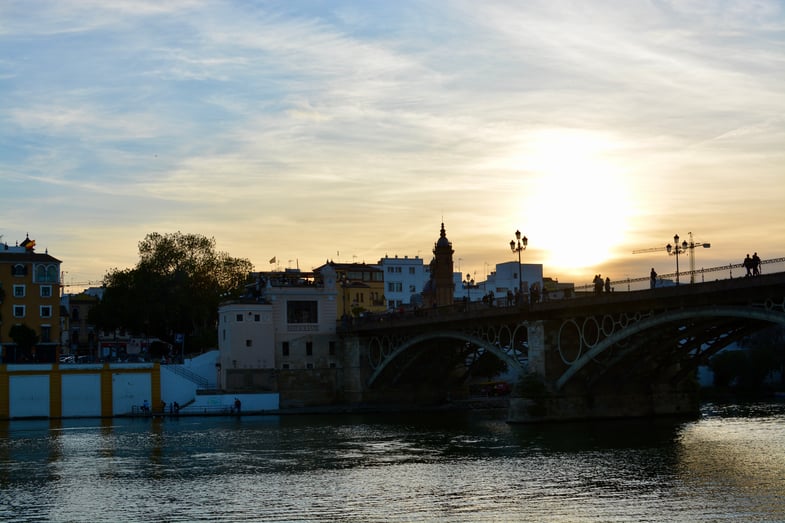 The Puente de Isabel II connects Sevilla centro with the neighborhood of Triana.

The sound of construction nearby, vehicles honking, and man shouting, despite our closed curtains, took turns interrupting our sleep. We all thought it was a little downside of staying at a hostel in the center of Sevilla. However, it did not bother us much; on the other hand, we appreciated the bustling and fun atmosphere of a big city.

However, a small bowl of cereal or a toast with ham were not enough to fill our empty stomachs. Paulina, Emily, Danar, Lexie, and I decided to hold our study hour at a DD’s nearby. “We need some protein to really boost our energy, guys,” we said to each other in a tiring tone while walking. Entering DD’s, we saw choices of breakfast sandwiches, which lightened our eyes. The only thing we could hear was us debating on what food to get and which smoothie to drink. We munched on our sandwiches of sunny-side up eggs, cheese and ham. Perhaps, those were truly “life saviors.” 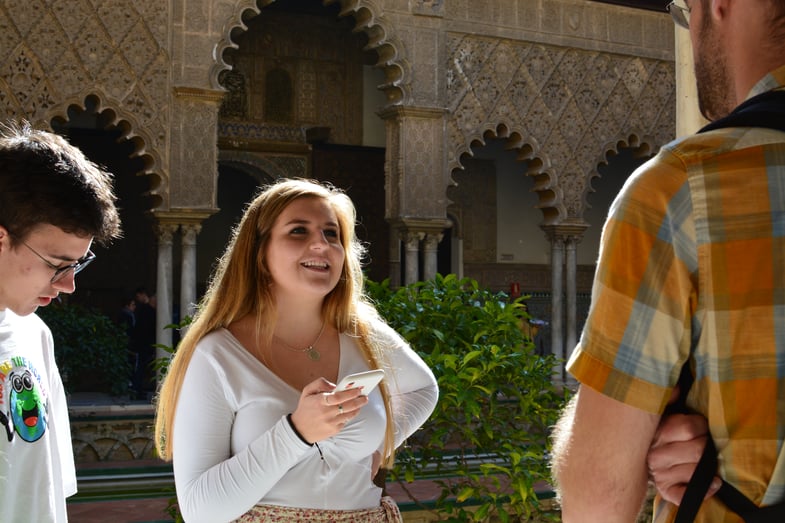 After studying, we took a two-minute walk to the Alcázar of Seville. Unlike the long line of visitors waiting to get in, we came prepared with tickets in our hands and ready to dive into some “layers” of the location. But, it was unlike any other places we had been; its beauty overwhelmed us with various architecture styles, different color palettes of decorations, and the Royal Garden which was garnished with a maze, vibrant orange trees, huge water fountains, koi fish, lines of palm trees — lavish things that only the Royal would have to themselves. As if there were no dead corners, we held up our phones all the time to capture everywhere we passed by. Its beauty held us back to be able to enjoy the beautiful scene just a little even when our stomachs were roaring for lunch.

The group in the Royal Garden (Photo Credit: Ngan '20) 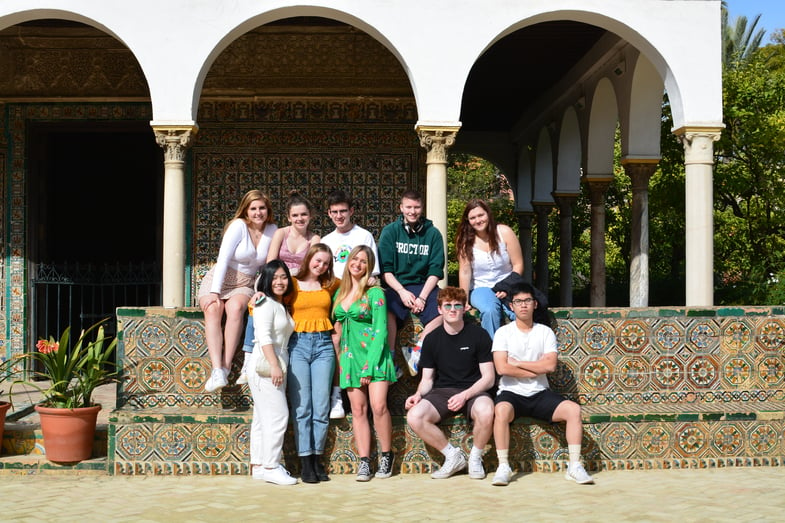 We did not know what to eat, so we went to this famous Spanish burger chain for the second time during the excursion. Then, we walked back to our hostel for a short siesta before more activities in the afternoon. Our next and final visit of the day was the Seville’s Cathedral, which might have been the third cathedrals we had been to in this term. The inside architecture and arrangement were pretty much the same as the Cathedral of Segovia, however, it was wider and longer. The main feature of this cathedral that distinguishes itself from others is the pathway to the bell tower-- instead of narrow stairs, it was a wider and less stressful waking space, a ramp The Cathedral of Sevilla is also the largest Gothic church in the world! 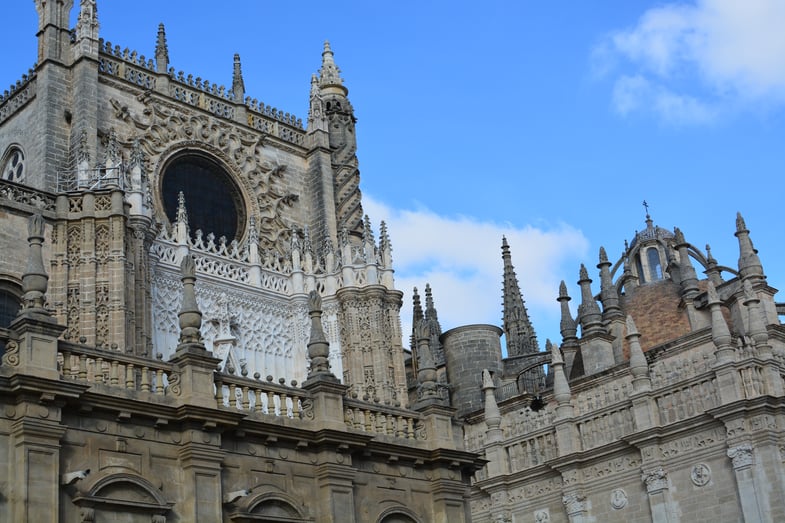 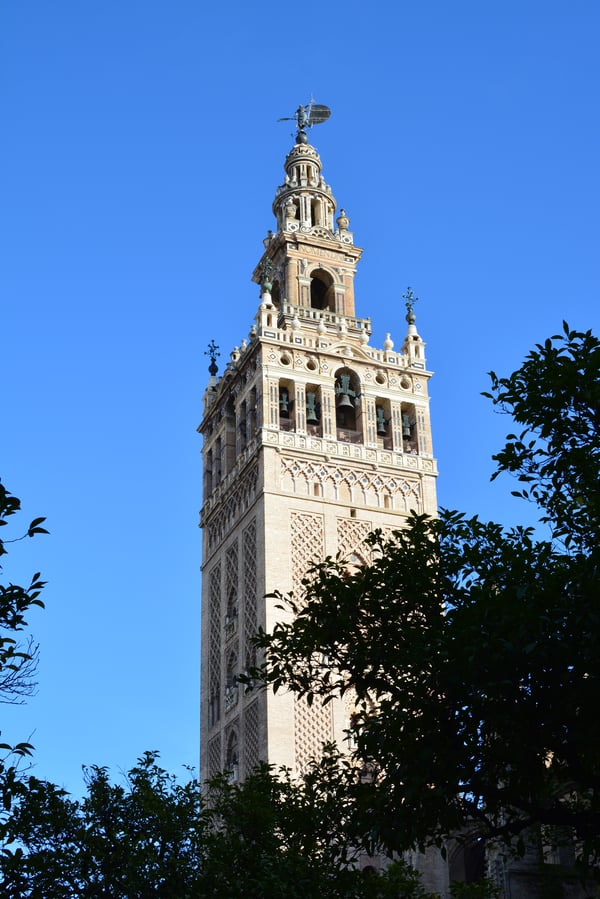 The bell tower from the outside (Photo Credit: Ngan '20). This bell tower was the former minaret of the main mosque of Sevilla when the city was an integral part of al-Andalus, a Muslim controlled territory in the Iberian peninsula.

Ending the day after visiting some attractions, we had more free time to walk around and explore the city on our own. We usually met up before dinner for some gelato, our favorite snack in Spain. For dinner, we had some delicious Japanese food: some udon, ramen, sushi, and hot green tea. We were all full, exhausted, and ready for bed. We went for a walk on the way back to the hotel, enjoying the quietness when the city was asleep. 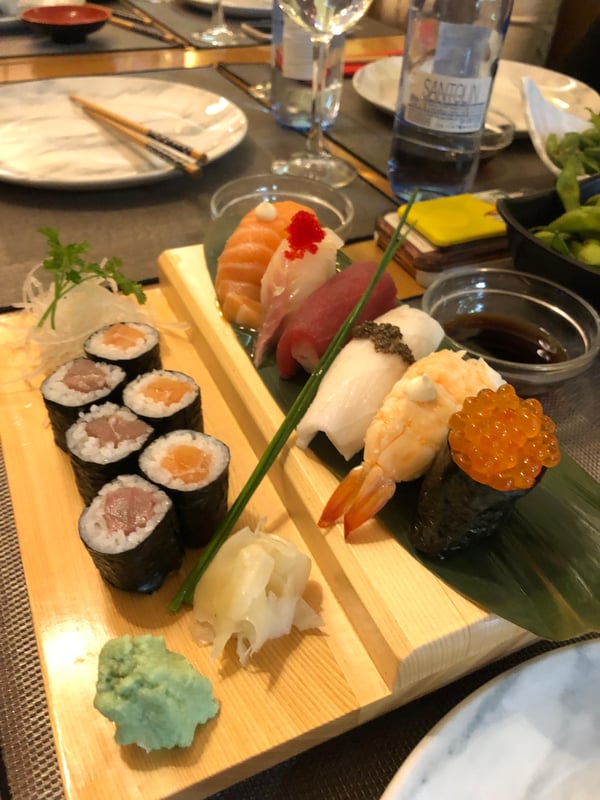 The next morning, we needed to wake up early to check out and visit some final places in the city for some presentations. We had a quick study hall, then walked away from the hotel to go to a bullring nearby where Minh gave his presentation on bullfighting. The sun was shining and the sky was blue. We all had a little time sunbathing. Afterwards, we went to grab some lunch to be able to make the train back to Madrid. The travel was faster than previous times, which made the group so happy. We arrived in Segovia on a bus at 7:30 PM.

Sevilla was too gorgeous to say goodbye, but we know one day we will come back. We all have left parts of us, of our love and memories back in Sevilla… 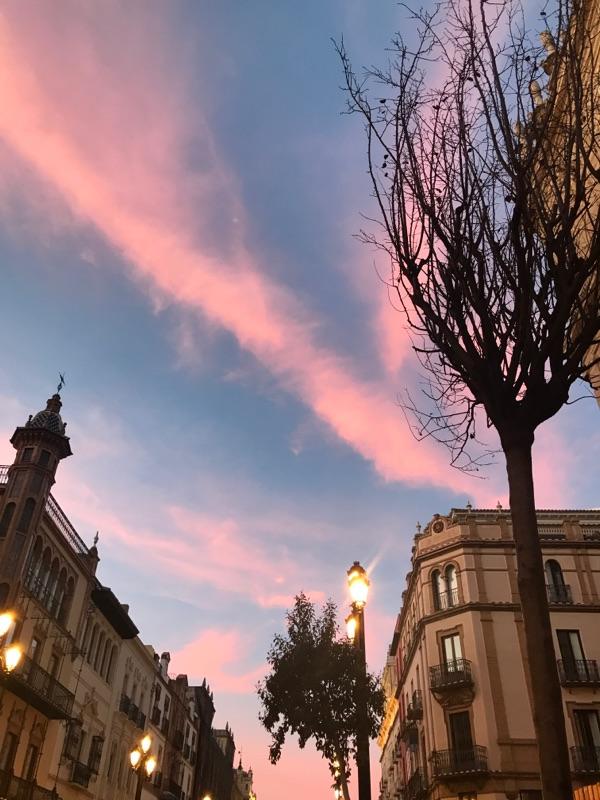