Proctor en Segovia: Taking It In

My first impression of Spain was how small the spaces are. After arriving in Segovia, Mikaela took me to my host mom Marife’s apartment. In addition to the elevator that could only fit in three people at most, my shower is located in my room and the corridor can only have one person passing each time. Marife seemed like someone that knows exactly how to enjoy life, though; there are approximately more than ten kinds of glasses and cups in the kitchen and living room, and her narrow corridor is full of organised and delicate decorations. Knowing Marife and the daily schedule in Spain, which includes a siesta (a nap about two hours in the middle of the day) and a dinner that doesn’t start until 9:30, I slowly started to process the much more relaxed lifestyle in Spain.

Proctor at the Prado! Visiting program parent Christy joined us for a morning at Museo del Prado and an afternoon at Santiago Bernabéu to watch Real Madrid CF!

The town of Segovia is a calm and small city full of tourists, cafes, shops, and history. There are markets held at Plaza Mayor (where the school is at) every Thursday. The markets contain rare and interesting items from strawberries that are half the size of an orange to antique helmets from the 19th century. My Spanish teacher Rosa helped me bargain a pair of antique binoculars. It is possible to enter “moonlight kingdom” within twenty minutes of the old quarter of the town. Hiking in the mountains that used to be the Jewish cemetery and walking around Alcázar de Segovia, we can easily see time carved in this town. 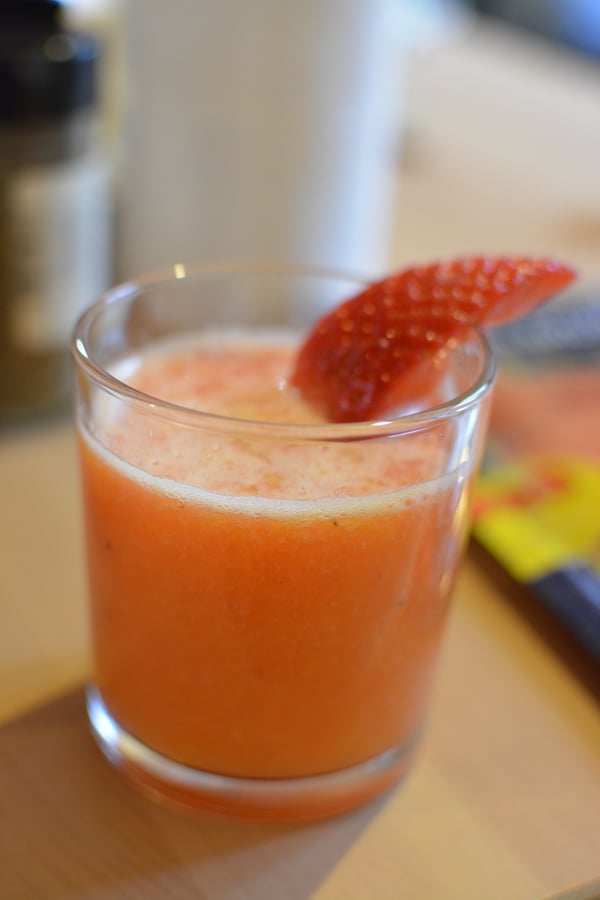 We went to Madrid twice during the last two weeks. Very different from Segovia, Madrid is much more modern and diverse. Once I entered the metro in Madrid, I felt like I was at home in Shanghai. Similar to Shanghai, Madrid is never short of crowds. I was lucky enough to encounter a marionette performer. The marionette was wearing a glittery red suit and singing some jazzy American songs. I put a few coins in my pocket the second time I entered Madrid. Besides the marionette performer, I gave coins to a guitarist and a drummer in the subway, another guitarist in front of Museo Nacional del Prado, and a group of middle-aged musicians playing Spanish songs at Puerta del Sol. The unique thing about street performers in Spain is that they make people actually want to stop and watch, and they say a genuine “thank you” to people. Unlike the busy Shanghai, people in Madrid are willing to stop and pay attention to you. 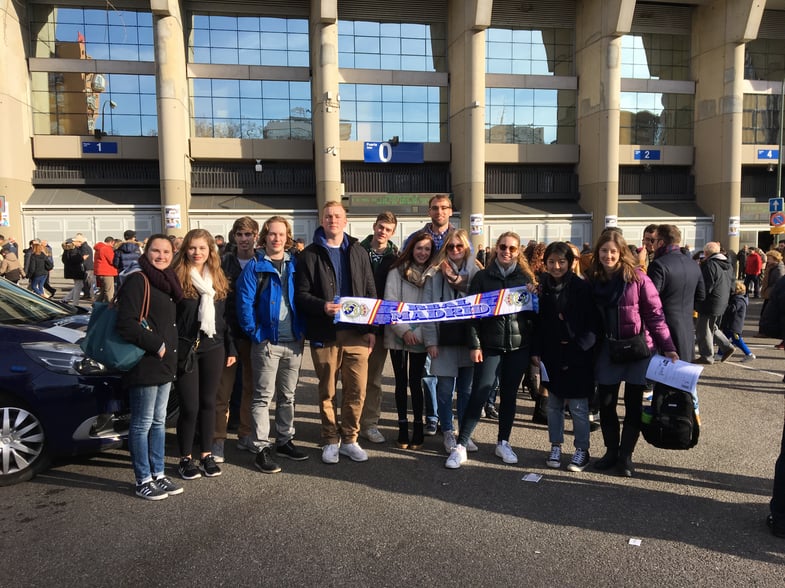 My mom used to tell me that families are always closer than friends. However, when I was put into a small apartment with my host mom Marife, the family bond was built instantly. Marife and I both love tea more than coffee, dogs more than cats, and Avatar more than politics. She has really told me “Mi casa es tu casa.” She’s caring and energetic, and she puts on lipstick and a pink scarf when she goes out. The metal art teacher Jesús and my guitar tutor Oscar are also patient and inspiring. I think when the daily paces are slowed down, people have more time to care about their surroundings. 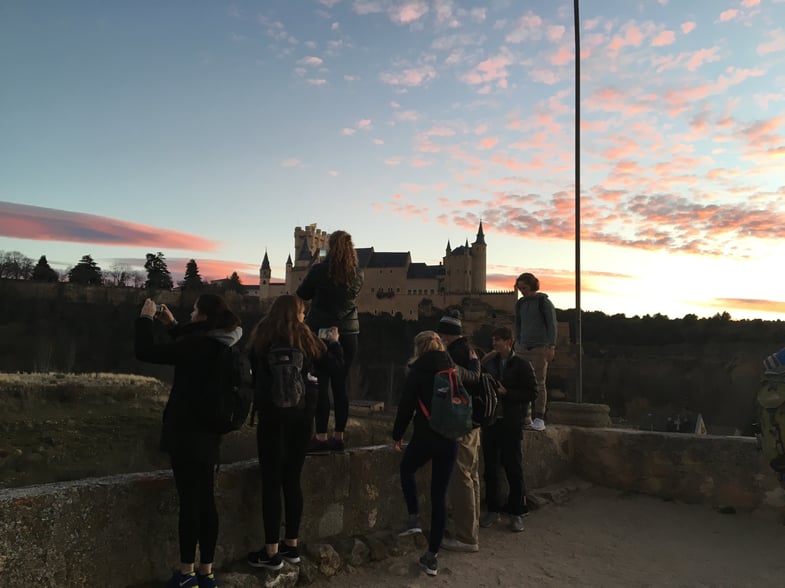 Another perspective of the Alcázar, this time from the Iglesia de la Vera Cruz. 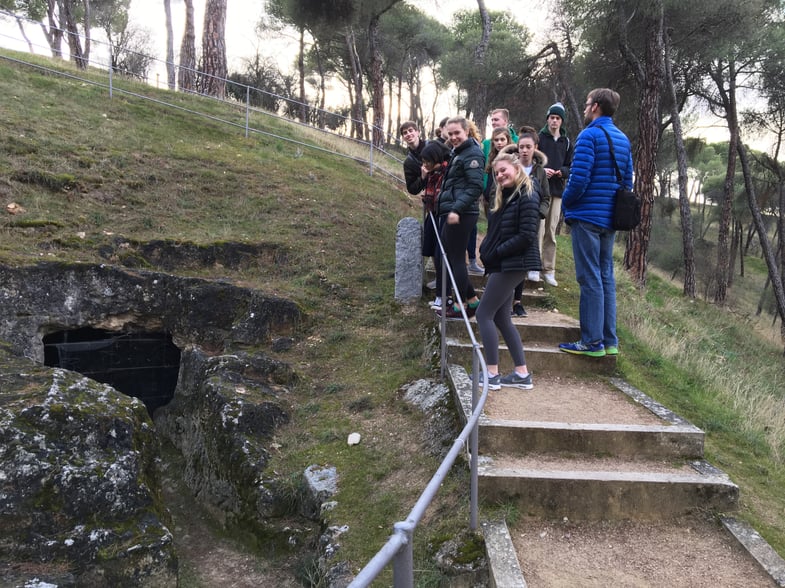 It has only been two weeks, but so much has happened. I look forward to more exciting events in the future. 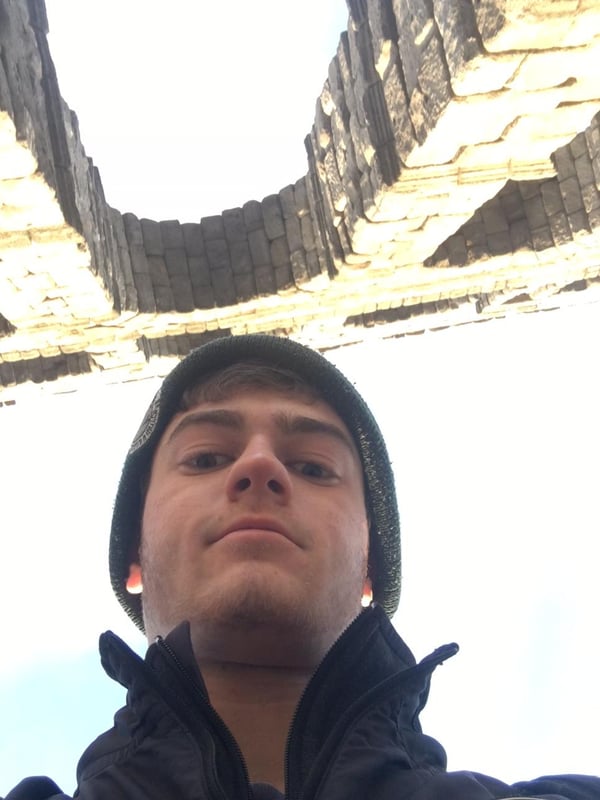 Enjoying chocolate con churros in a café a few paces from the aqueduct.

This week in Segovia there was a turning point that I quickly experienced from adjusting to a new home, family and culture to truly being able to embrace and experience what life is like living in Europe. I've realized life is much less rushed and simpler for everyone here even when trying to accomplish the same goals we have. Being able to take a "siesta" in the middle of the work day and having free time to spend with my host family is something I truly enjoy. Walking to school and being forced to use Spanish at meals, on the street and in class makes the language feel much more real and less of a class subject. My host brother Danny is my age and and much more similar to me then expected. He plays video games, spends nights studying, hangs out with friends and family and I truly considered him a friend and the closest thing I've ever had to a brother in my life. 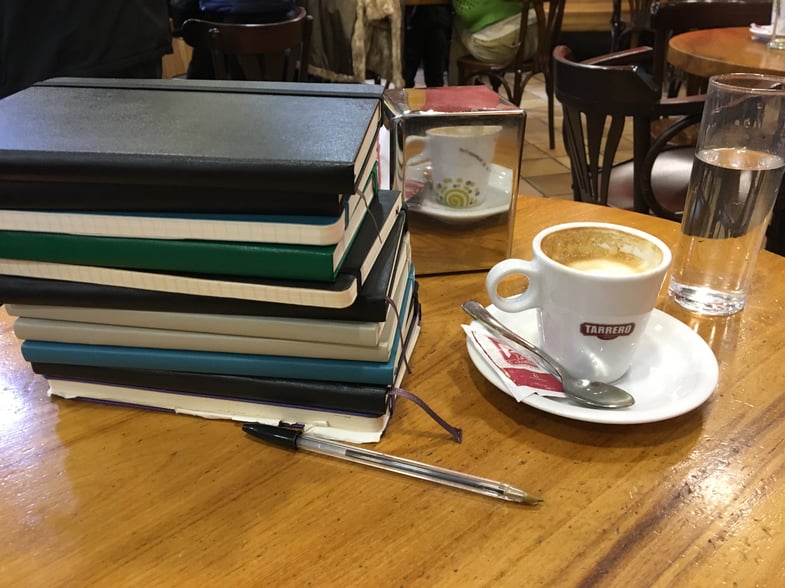 Before I got to Spain I would talk to my friends that were here in the Fall and see them surrounded by a completely different style of architecture and streets filled with stores that looked so foreign. I simply would be in shock how they seemed so comfortable being there. Now I truly understand how quickly the feeling of being a foreigner can disappear. Within a few days I began to feel like part of this unique culture.

Everyone’s host family's loves them and no one is nervous to live like they normally would at home. I think Spanish culture is a culture that people will never understand until completely surrounded by it. The amount of Spanish that you pick up is [surprising] because you don't realize you’re learning because of how different the feeling of learning so much without being so stressed out is.

Dressing up for a Spanish class skit.

This weekend we experienced the true enjoyment of people in Madrid. We all completely stepped out of our comfort zone and joined the other 80,000 people in watching Real Madrid and Málaga battle for 90 minutes on the pitch. The love people have for the players and teams is comparable to few other sports in America. Watching a soccer game and seeing the fans reactions throughout the time is something that I will never forget. So far in Spain I have learned the true meaning of Proctor’s living to learn aspect, and it has been wonderful.

In the Spanish Cathedral of fútbol (not to anger our Barca aficionados) the debate of the afternoon was: has Ronaldo lost his touch? Real Madrid still wins 2-1 thanks to Sergio.....RAMOS!