Proctor en Segovia: The bottom line is, that tiramisu was out of this world

The best things happen when least expected. That has been a phrase tossed around here and there, but I never really thought too much about it and how true it actually is. After the group ventured to our second professional soccer match of the term, Málaga vs. Getafe on Zack’s 18th birthday, we were in search of food. Some of us broke off to get some sushi, but I always stay with Ryan because I always assume he knows the most and will pick the best places to eat. He trusted the loyal app “TripAdvisor” to uncover an Italian restaurant not too far from where we were. “It has good reviews,” he said, but somehow he missed the one that said, “Don’t be scared.” We walked into this restaurant in soccer spectator attire, and I would say that the vibe of the restaurant and the people in it did not match that sense. 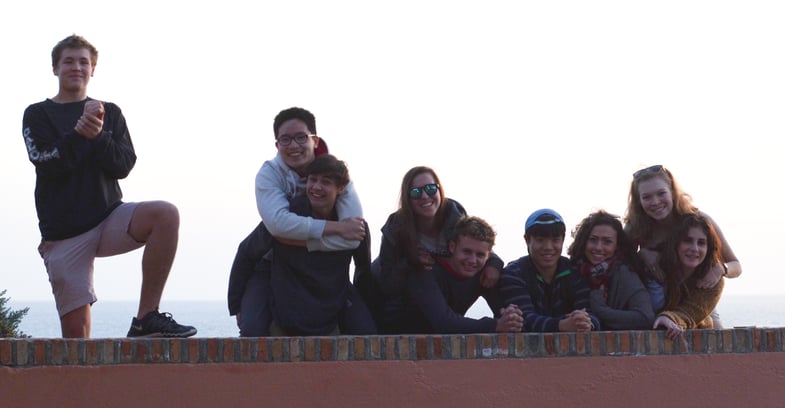 You know your experience is going to be good one when Ryan, our trusty Spanish speaker, is unable to communicate with the hostess. With the Spanish I have learned on this trip, I was able to pick up a few words that she may or may not have intended, words such as “no” and “we can’t.” That being said, we managed to get a table, for 6, by the window in the small rectangular room with a bar several feet away. We sat down and one minute in we were faced with yet another challenge, reading the menu, which was written in illegible cursive, maybe Spanish, maybe English, the world may never know. After a few more moments the waiter came to greet us. Ryan asked what he suggested for food and he answered, “Oh, I’ll bring you something,” repeating it several times until we became fine with it. He added, “I’ll be back,” yet 20 minutes later we look over to the bar and there he sits, with a friend. I don’t want to give the impression that this place was not nice, because it was beyond nice. Fancy wood lined the walls and plants in decorative bikes lined the windows.

There was just something that seemed odd, but none of us thought anything of it, until something happened in those 20 minutes while we sat waiting. A glass shattered, unused, not touched, sitting on the table; it just shattered sending glass to cover the nicely set place mats. Little did we know this was just the beginning, the beginning to a night I will truly remember forever. The waiter became our buddy. He checked in on us every 5 minutes, bringing us the most delicious Italian food I have ever tasted, and in between chatting with his friend at the bar. As the night went on, our population of buddies grew. A man, so interested in us, kept asking over and over where we were from. I even looked over once and he was taking a picture of us; I smiled of course. We hadn’t planned on asking, but we learned his life story. We learned that he had a daughter in Missouri and he eventually called her while shoving the phone against our ears to talk to her; it honestly was like he had never seen an American before. Halfway through the meal the waiter, who also could very well have been the owner, told us not to look at one of the waitresses. He said something along the lines of, “Don’t look at her, she’s crazy,” implying she was the reason the glass exploded moments before. A little later, we all hear Ryan’s voice, who went to run some errands, coming from Mikaela’s phone that sat out of reach in the middle of the table. No one had answered the call, but there the phone was mid-call with Ryan. More doings of the waitress? Had we looked into her eyes yet another time? 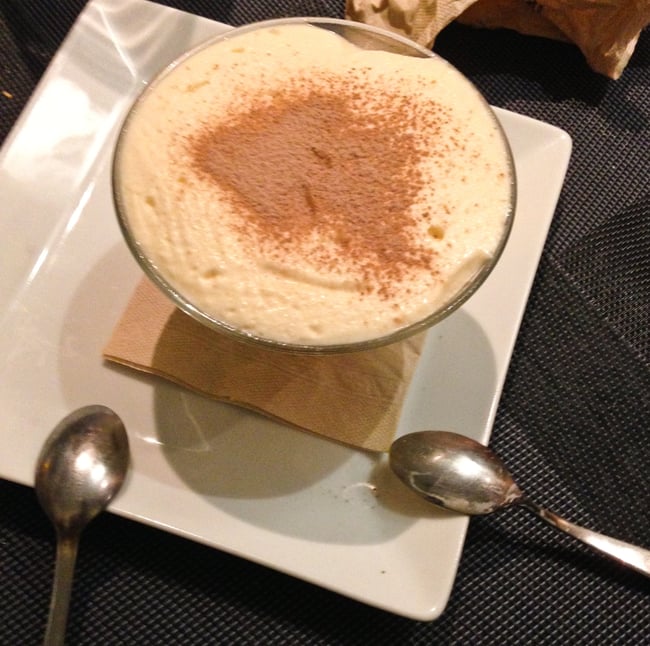 Adding to our collection of new friends was another waiter, who seriously came out of nowhere, asking if we wanted dessert. After the amazing meal we had just eaten, the clear answer was yes. We asked for gelato and he began listing off about 50 different flavors, when we asked for one, he decided to tell us that they didn’t actually sell gelato. I can honestly say I can’t remember the last time I have laughed that hard.

It began to feel like all these events were adding up to the main event (not the tiramisu, but that was also amazing). This event was the three male waiters, one of them the boss, literally ripping the restaurant sign off the wall to hold up for a group picture with us. So, this is a really long story of a very eventful dinner that seems to have no plot or no moral to take away. But the point is that it was not the best meal because the food was so good, it was the best meal because of the craziness, because of the laughs, because of the conversations, because of the confusion, and the other events. All of this made it a night to remember, a night that would not have happened anywhere else than in this little restaurant in the city of Málaga in this beautiful country called Spain. 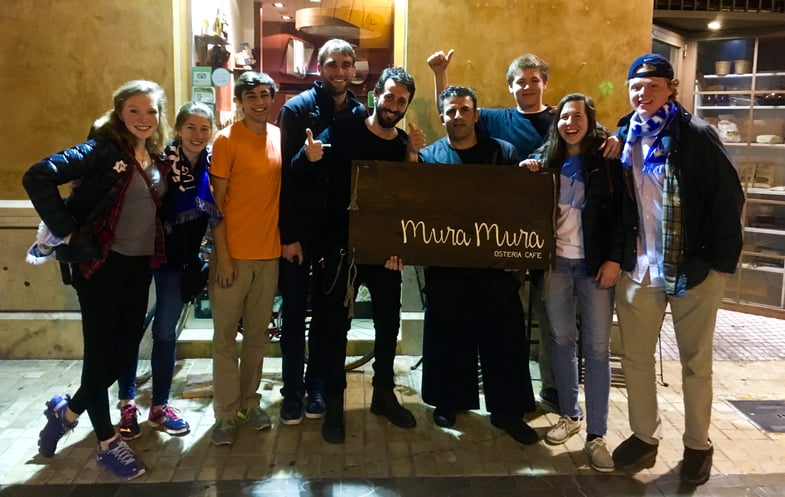 Like I mentioned in my post about our first weeks in Spain, I am not good at directions. I get lost and often make frantic phone calls describing my surroundings. I decided that I needed to bite the bullet and try to get somewhere using an actual map and not the GPS on my phone. Armed with a map and my subpar directional skills, Ryan pointed out the start point, our hotel, and our destination, a restaurant. I managed to weave my way through Málaga and get us to our restaurant without getting lost or taking unnecessary detours. While this seems like a minor feat, I’m considering this as one of my many growing moments while abroad. 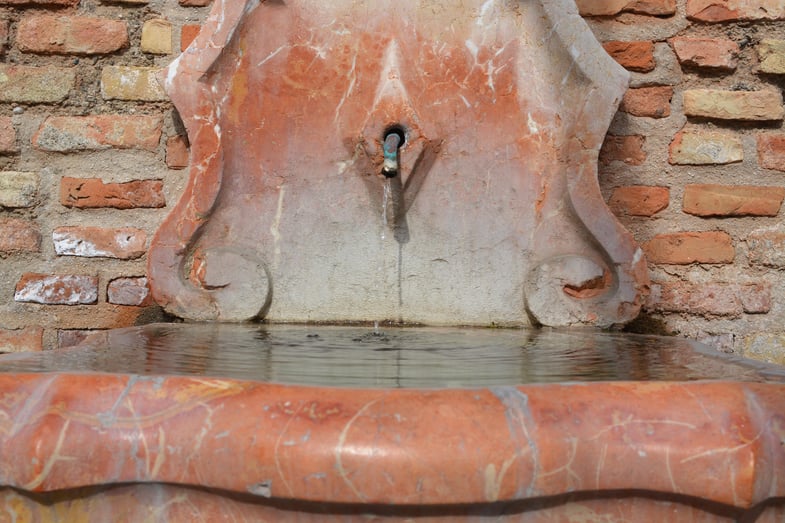 After our time in Málaga, our next stop was Almuñécar. It was a sunny 68°F and a group of us went to the beach. We all wore our bathing suits, shorts, short sleeved shirts, and flip flops. You would think we were wearing christmas lights and sombreros with the looks we were getting. Everyone from the town wore their gloves and scarfs; the little kids consumed by their down jackets. I wondered how they would react to a New England winter if this weather was winter coat worthy.

On the beach, none of us had service or wifi. While this may be a teenager’s worst nightmare, this was one of the best moments thus far on our trip. After jumping in the Mediterranean ocean, we broke out the guitar without any social media. This lack in technology allows us to connect without distraction. This generation’s FOMO (fear of missing out) is alarmingly common. While I do admit I am guilty, that I quickly enter in the password when I find out a hotel has wifi, I don’t feel quite as attached to my phone anymore. 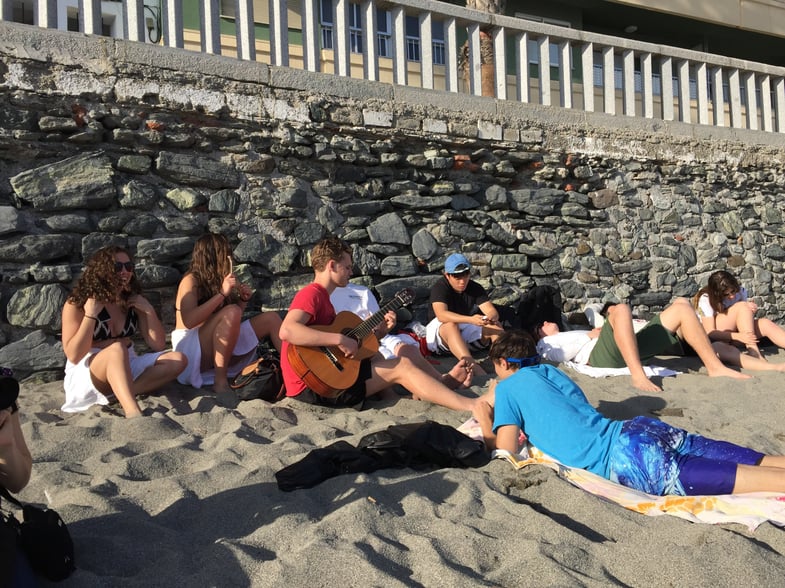 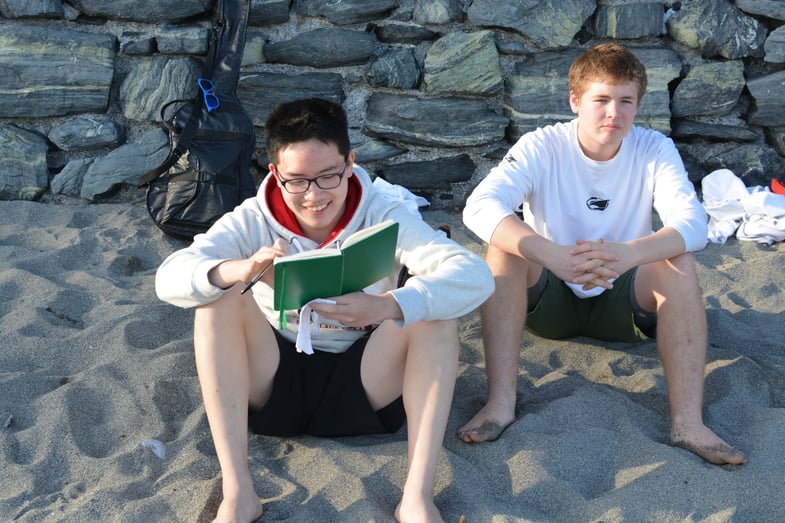 From the first week in orientation to all of our abroad programs, Proctor really encourages the limited use of technology during unique experiences. Mountain and Ocean classroom almost never see their screens for a whole term and I have only heard positive experiences from both. While I wish I could do them all, I’m so grateful I chose Spain, I feel l have seen glimpses of the other programs. When on the beach I thought of Ocean; on a hike I thought of Mountain; in art museums I thought of Euro. 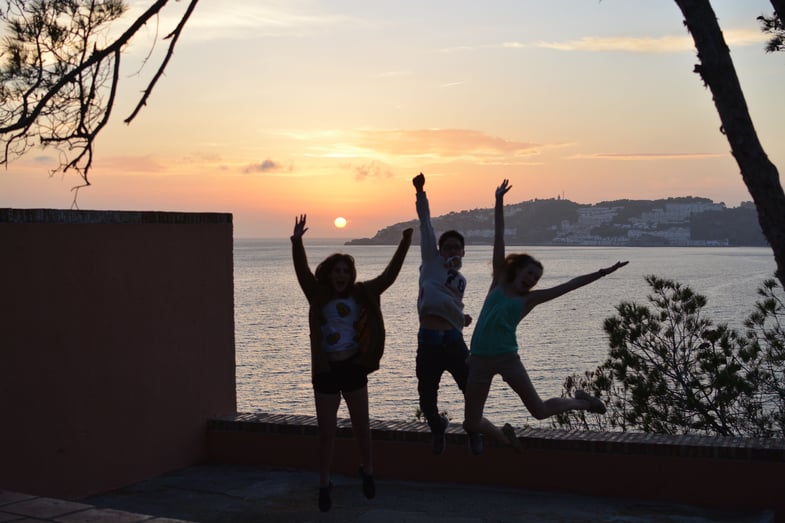 Well beyond the halfway mark in our short term, I’m amazed at how fast it has already gone. As we enter into our last weeks, I’m going to continue taking full advantage of the opportunities: learning the history of the Iberian Peninsula, struggling through some conversations, and maybe even navigating through another city. 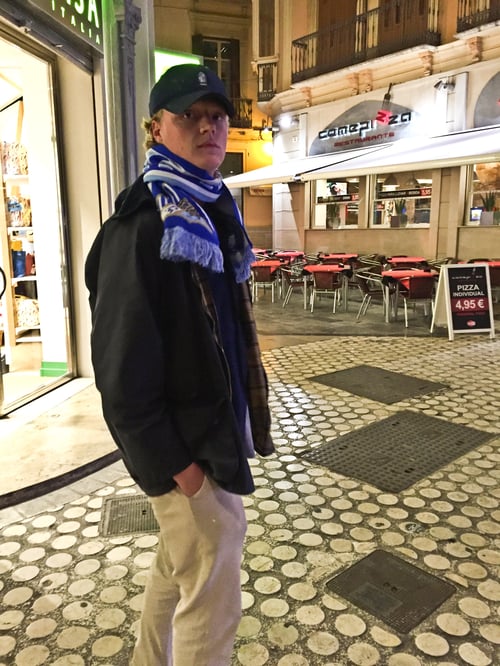 Posing under the Málaga Carnaval lights.

This week in southern Spain was memorable to say the least, even without the excitement of a fútbol game the night of my eighteenth birthday. I have to admit that this birthday may be one of the most memorable and lengthy of my entire life. The day started early and ended later than you will ever see me out on a classic Proctor Friday night. This day had everything, old castles and palaces, museums, an exciting soccer game, and a dinner capped with rice and raw fish. Even the museum was fun, and for a guy like me this is a rarity to say the least, but then again who doesn't like a car museum. Not to get sentimental, but, for me, the coolest thing about this trip has been the soccer, and the relationships I've formed with a few other students on this trip centered on this sport. While I've grown up going to sports games, there was something unique about being able to see two La Liga games back-to-back. Although seeing Real Madrid was an experience I will never forget, I honestly enjoyed watching Málaga and Getafe play just a little bit more. Something about the rowdiness of the surrounding area and the working class stadium reminded me of the small town basketball and baseball games of my youth. It proves that for a game to be exciting it doesn't need to have the best players in the world, or the most fans watching, you just need two teams with a fire to win and a group of people small or large who can't stand to see their team lose. 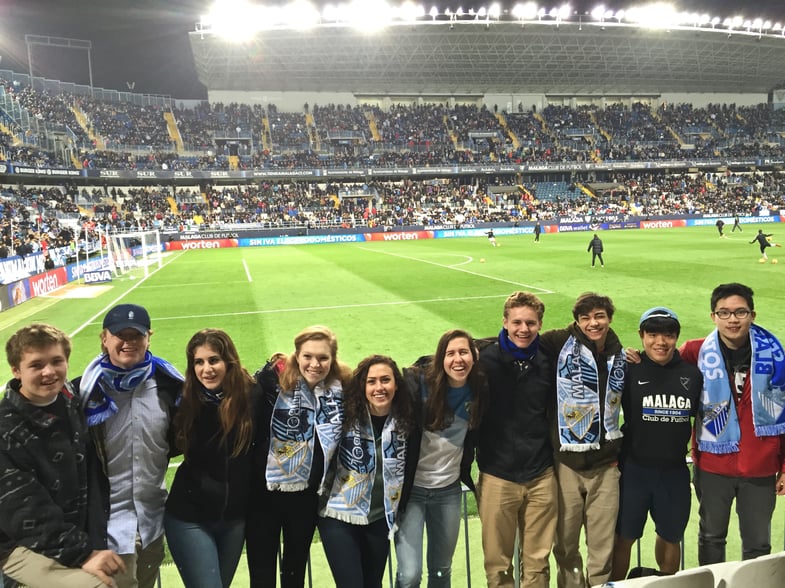 Waiting for the La Liga match, Málaga vs. Getafe, to begin! 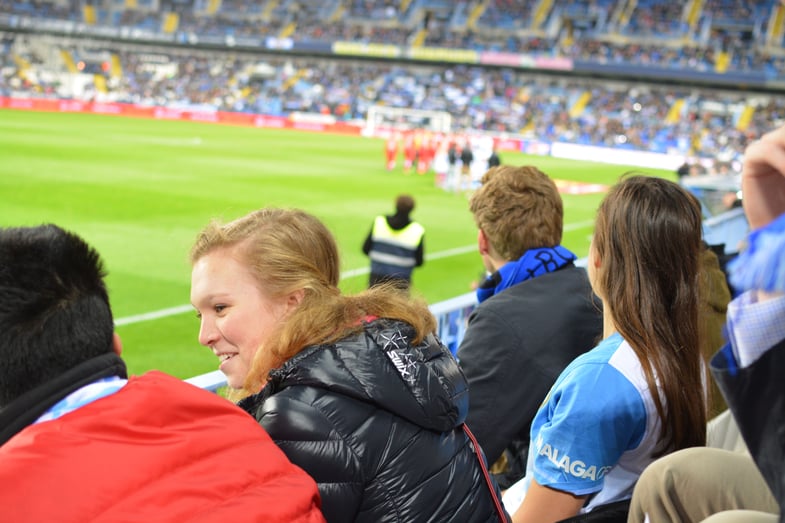 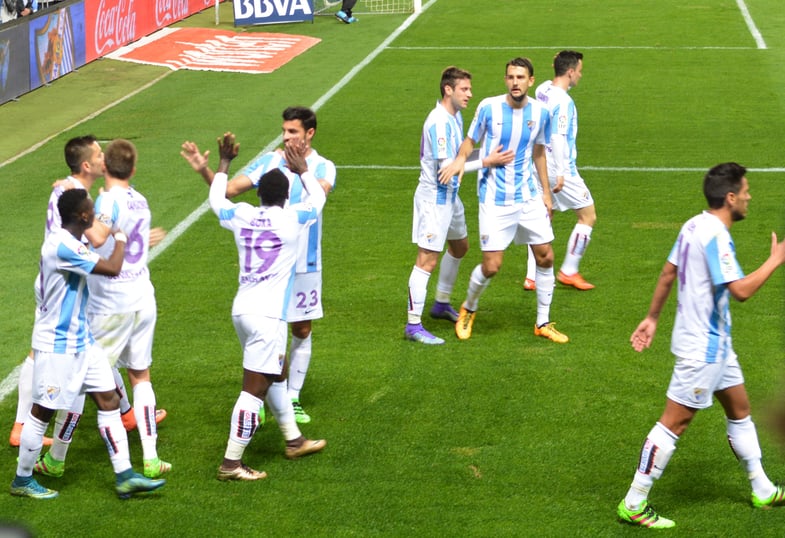 However, with all the memories, strangely my most memorable came not at a stadium at all but in a small beachside town in Andalusia. Jay Yun and I trekked across the cityscape in a wishful attempt to find a Premier League game on TV. Using the little Spanish knowledge we had we went restaurant to restaurant trying to find someone who was willing to put the game on. Finally, four restaurants into our search, we got a solid lead on a British pub that was sure to have it. I told Jay to forge ahead as I had to stop quickly at an ATM to refill my empty wallet. After finally getting the ATM to work, I grabbed the cash and ventured ahead in search of the illustrious British pub. I turned the corner to find Jay pumping his fists in celebration while sitting at an outdoor table, coke in hand, watching a classic underdog story unfold. I jogged over, took my seat, and settled in to watch an instant classic unfold. Later, on our way back home, Jay said that my face when I saw that we had found the game was the happiest he had seen me on the trip, and I have to agree. Sometimes it's the little things that can make us the happiest. 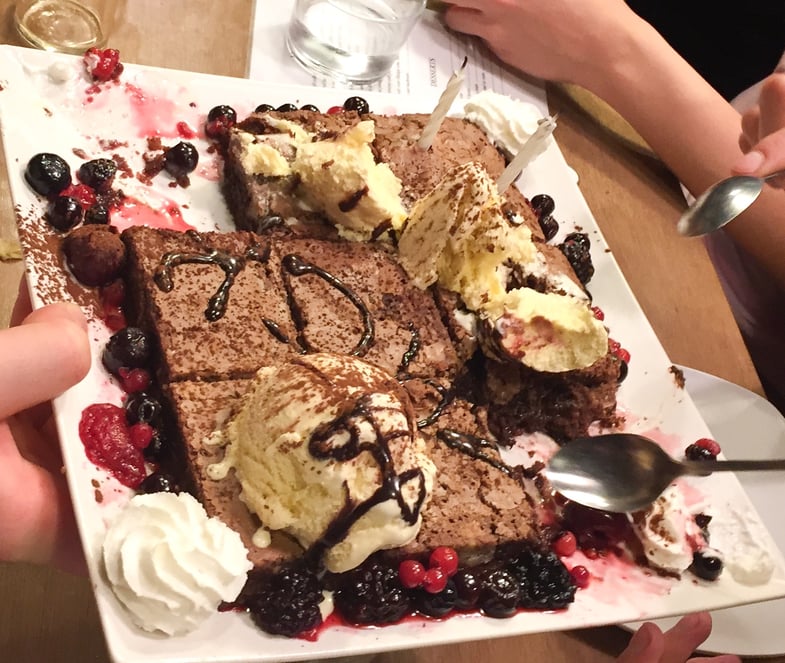