On Saturday, September 11, Hunter Churchill and I gathered our seven Proctor students and their student leader, River De Vink, to hike on Day #4 of Wilderness Orientation. We had decided that morning that we would head up Mount Willey, a formidable 4,285 foot peak in the heart of New Hampshire’s White Mountains.

After a very cold night that dipped down into the low 40s or high 30s, we packed up our gear for the day, getting ready to make an ascent on Mount Willey. The banter of the morning was about how flipping cold it was the night before. Rain and cold were not our friend. Our thoughts turned to whether we might brave temperatures that were slated by one weather forecast to be only as high as the mid-40s. Could that be right? Were we on Wilderness Orientation or a survivalist training reality show? I couldn’t stop thinking about Chris McCandless. 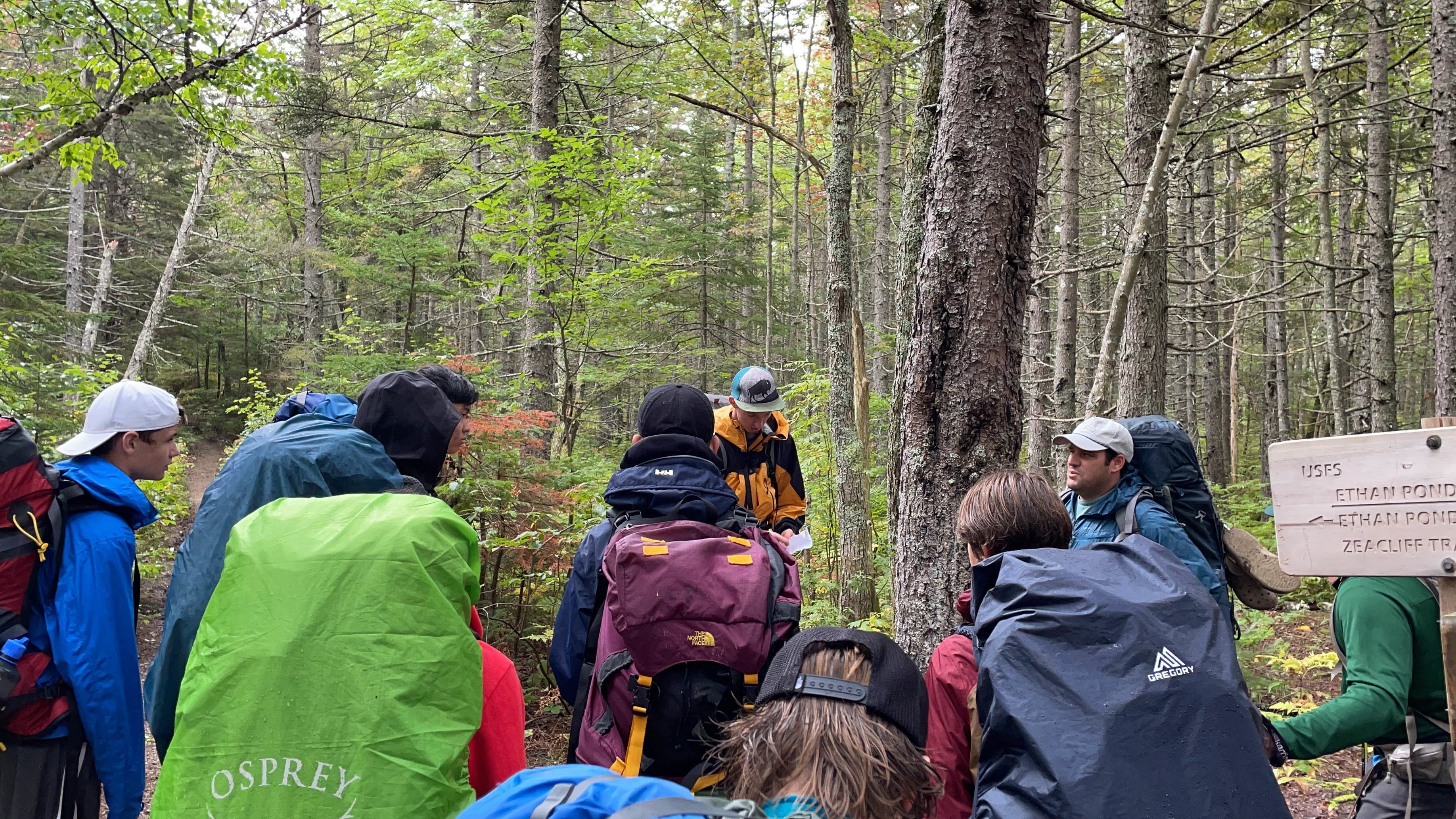 The weather seemed awful microclimate-y, a condition I experienced daily for much of my career in the Bay Area. Prepping for various microclimates meant you never knew how to dress for the coming day. Since we were staying at Ethan Pond, the shelter’s caretaker, an amiable and burly guy from Vermont who bonded with me over college stuff the evening before (“What college were you in? No way, man. I was in Morse?”), had me thinking his weather posting from his ranger-weather friends couldn’t be wrong. I was wrong. He was wrong.

Hunter had that determined look in his eyes that said, “Hey, what do we have to lose?!” I had to choke back the fears in my mind of tumbling off the side of…

This is where things got less technical and more precise--language-wise. Was it Mount “Why-LEE?” Or, “Will-HEE?” Mount Willey.

As I tried to will him (Hunter) into thinking that having me stay back in our tarp tent eating M&Ms and cowering under my less-than-serviceable sleeping bag was a good idea, I gulped a shot of courage and cowboy coffee and asked, “Can I borrow both of your hiking poles?”

Hunter didn’t have to answer. He was determined. The boys, mostly the freshmen (Turner, Henry, Harper, Myles, Drew, Josh, and Liam) and River were up for anything.

“Listen, boys,” Hunter directed, “Let River ride up on the point. Stay together. Don’t get too far ahead. If it feels like you are getting away way ahead of us, slow down,” he said deliberately. Brian and I will bring up the rear. I’m glad he didn’t look at me when he said that. “And, remember, when you see a hiker in front coming down or in back trying to pass, what do you do?” In faux unison, “Let them pass // Get out the way.”

And move out we did. The hike was up, up, up through boulders and rocks and surfaced tree roots that looked like something out of The Wizard of Oz. The White Mountains are supposed to be some of the hardest terrain in the country to hike. I remember someone saying upon our return, “It ain’t called the Granite State for nothing.” In my mind, I thought it should be called the “Big-Honking-Rock-and-Boulder-that-bruised-your-big-toe-and-tripped-you-up-the-hill-State”. 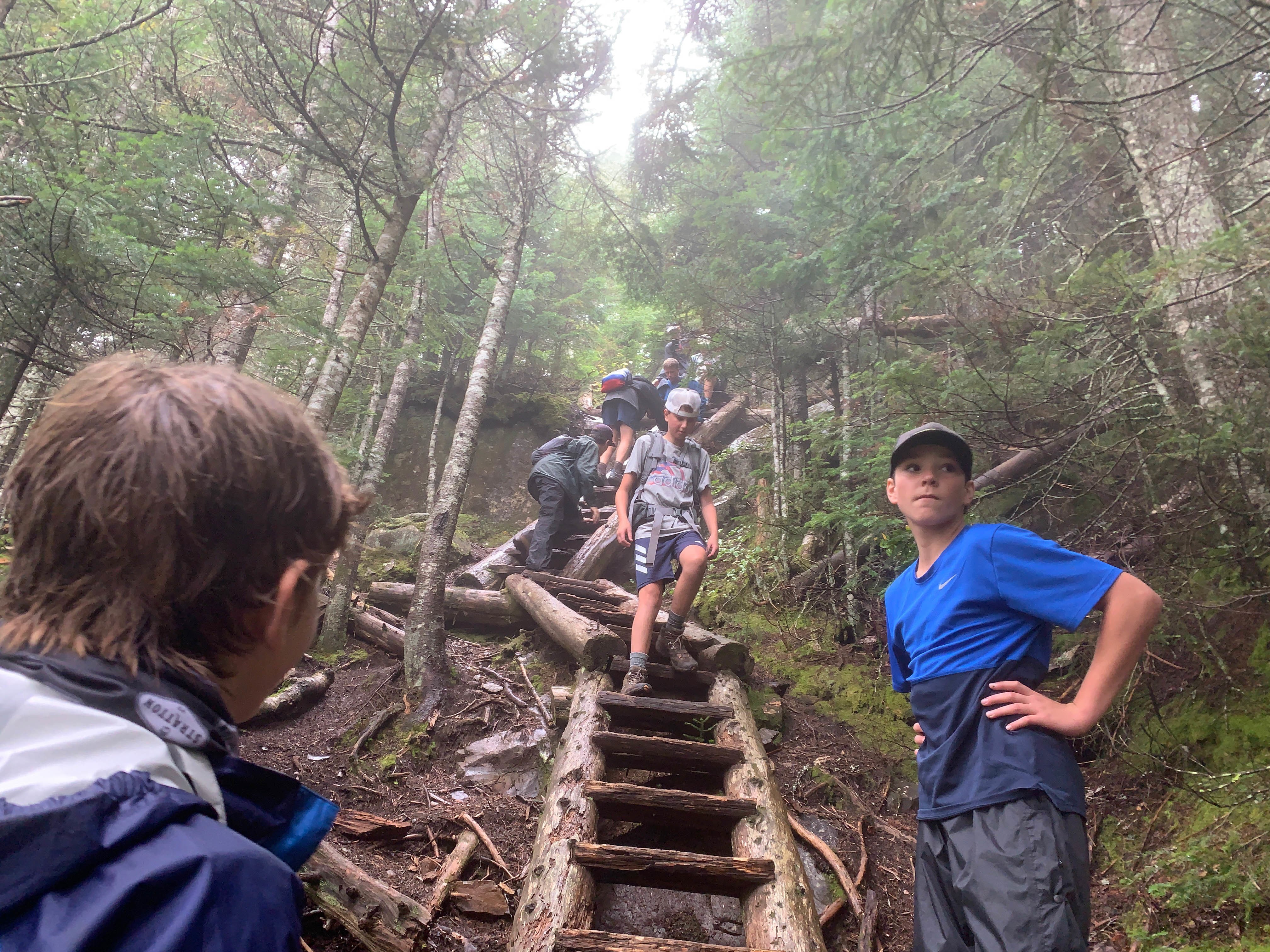 I distinctly remember kind of gliding ahead of some older folks about in their mid-70s who we passed on the way up. I said to myself, there is no way in heck those folks are going to beat me up the mountain. But I stopped--A LOT--and after the fourteenth pause and less than forty minutes into the hike, there they were. Up and up and up the trail they went. It was like that cartoon, Tutor the Turtle, kind of bouncy when they walked, but always making headway, passing me on their way to win the race. But it wasn’t a race Hunter said. 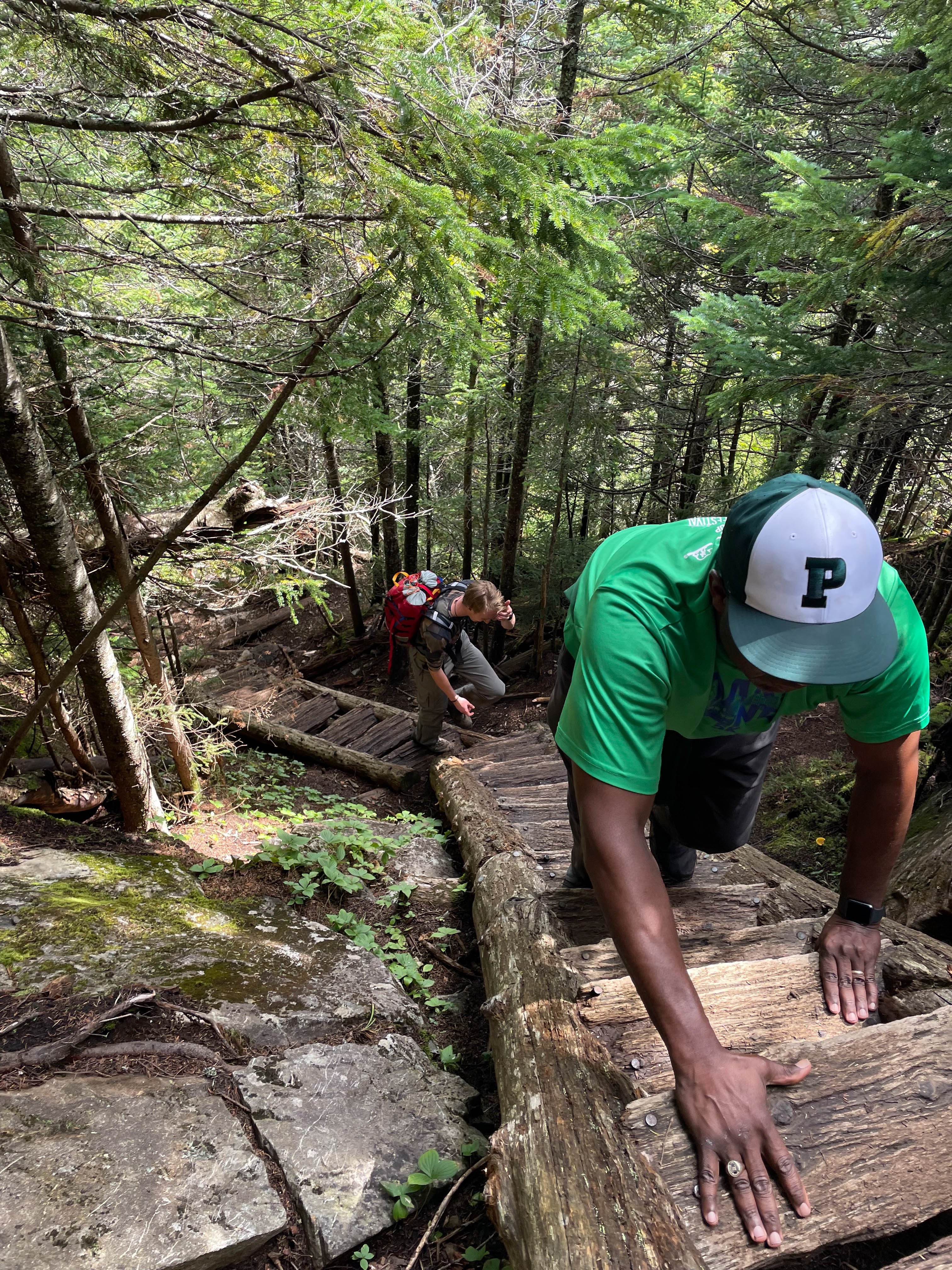 Then, just about halfway up the mountain, there were stairs you could climb. If someone took the time to put in stairs in the middle of a mountain, perhaps it was a serious climb to the top. All I could think about was, “How in the world are we supposed to climb back down?”

Up, up, up we went, through many a false peak. There were at least four of them that we went by. Maybe it was here. Oh, no. Now here. Nope. We could see sunlight and could hear voices up ahead (were they our boys), but it was not to be. Finally, we arrived. My poles were kind of wobbly. It was like climbing out on the deck of a tall building’s observation point. 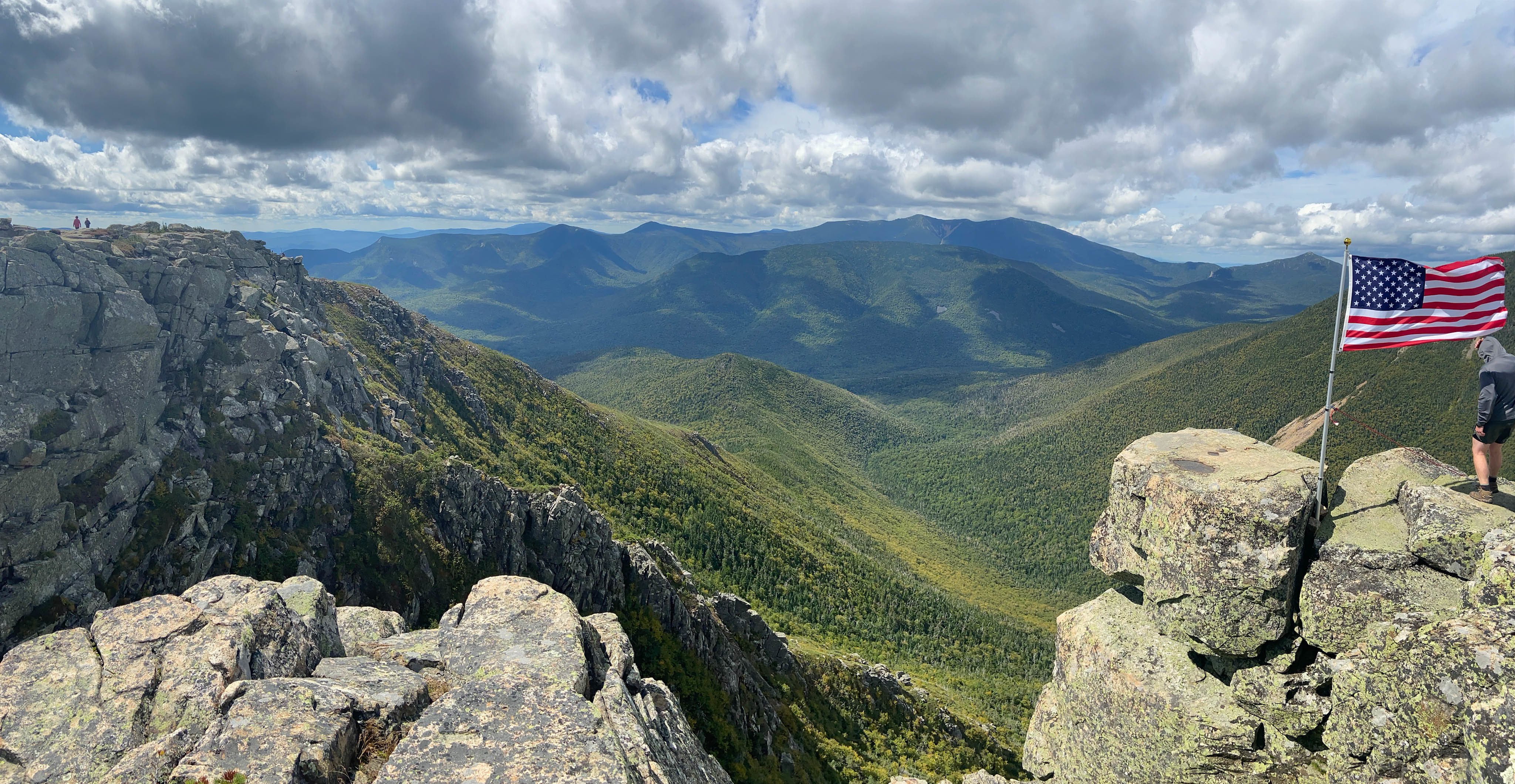 There were throngs of people at the top. Today was a special day. It was Flags on the 48 commemorating 9/11 by putting an American flag and an American flag with the name of the fallen from 9/11. Some folks were cracking open special Flags of the 48 adult beverages. That seemed odd considering that they were going to have to traverse their way back down the mountain. Instead, I cracked open my Proctor water bottle spiked with creek skimmed water and two iodine tablets along with a handful of lemonade powder. That creek water never tasted so good. 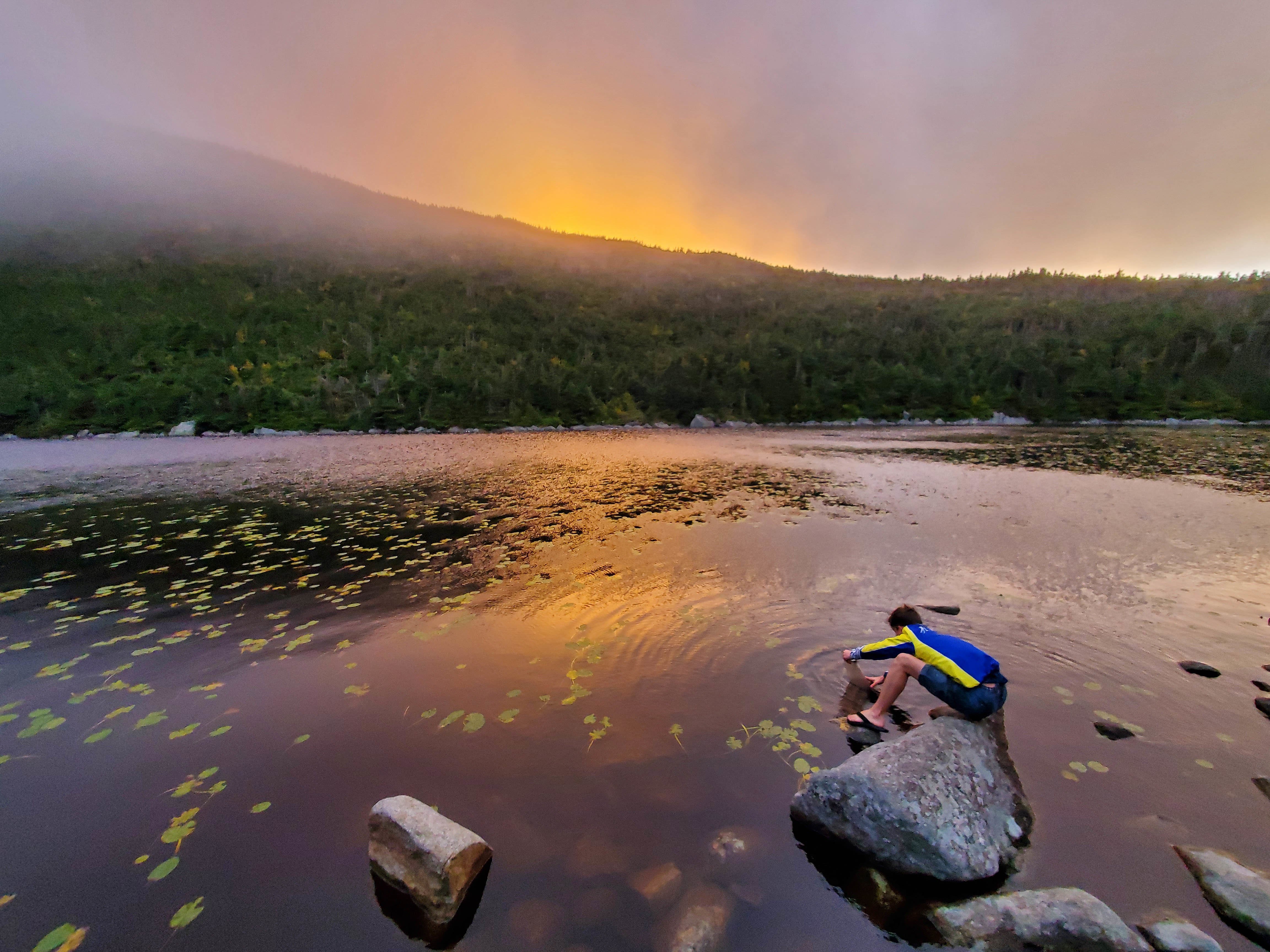 We made it, false peaks and all. The day turned out to be gorgeous. A little cool with temperatures in the mid-60s rather than in the low 40s. We were sweating hard. Or, at least I was. I saw Turner around the bend where we had our lunch standing up next to a bunch of trees about our height. Turner had accidentally dropped some of his GORP. A Canada jay was greedily eating what nuts and seeds we couldn’t gather off the ground on the top of what we now know was Mount Willey (Will-HEE). It’s funny how you come to know things. So often it is through doing. This shared experience atop Mount Willey occurred more than two weeks ago, but when I see the boys, River, and Hunter around campus now, we all talk and nod and laugh to each other like the oldest of old friends. This is the power of Wilderness Orientation. Through five days and four nights of intense hiking, bonding, and talking about the school, Proctor has curated one of the best ways that I can think of to set the bar high, challenge each and everyone to their limits, and have an amazing time getting to know the best that the school has in store. We fit here, all of us, because of that time together. Of course, there will be false peaks along the way - those moments when we think we have “arrived” - but our job is to keep hiking, to keep working, to keep pushing each other past those temptations to be “good enough”, and instead to keep our sights set on the true beauty that awaits us at the summit.