The Journey: The Woodlands Research Team

Recently, the Proctor Woodlands Research Team (Proctor’s latest evolution of academic and afternoon program work) and I traveled up to a point on their trail map - marked E7. We also traversed over to D7, and C7 - as the crow flies. To look at the flattened representation of that area on that map, those pins were actually a series of bright orange stakes in the ground set at regular intervals marking the spots from which the group would do their work. To be precise, E7 is indicated on the map in the Proctor Woodlands that stretches due northwest from the Woodlands Office.

Instead of hiking up the trail, Proctor’s Woodlands Manager / Science Faculty Laura Ostrowsky, along with Matthew ‘22, Cadi ‘23, Macaelyn '23, Aodhan '22, and I hitched a bumpy ride with Matt Mackenzie and the Woods Team Crew, past the cistern and a series of mountain biking trails, bouncing over some hellacious water ruts cut into the road to divert water runoff. And the rocks! Like just about every other part of the state, granite boulders as big as a VW Bug planted wheels down sprouted directly out from the ground like rounded dragon’s teeth on the leaf and dirt road. 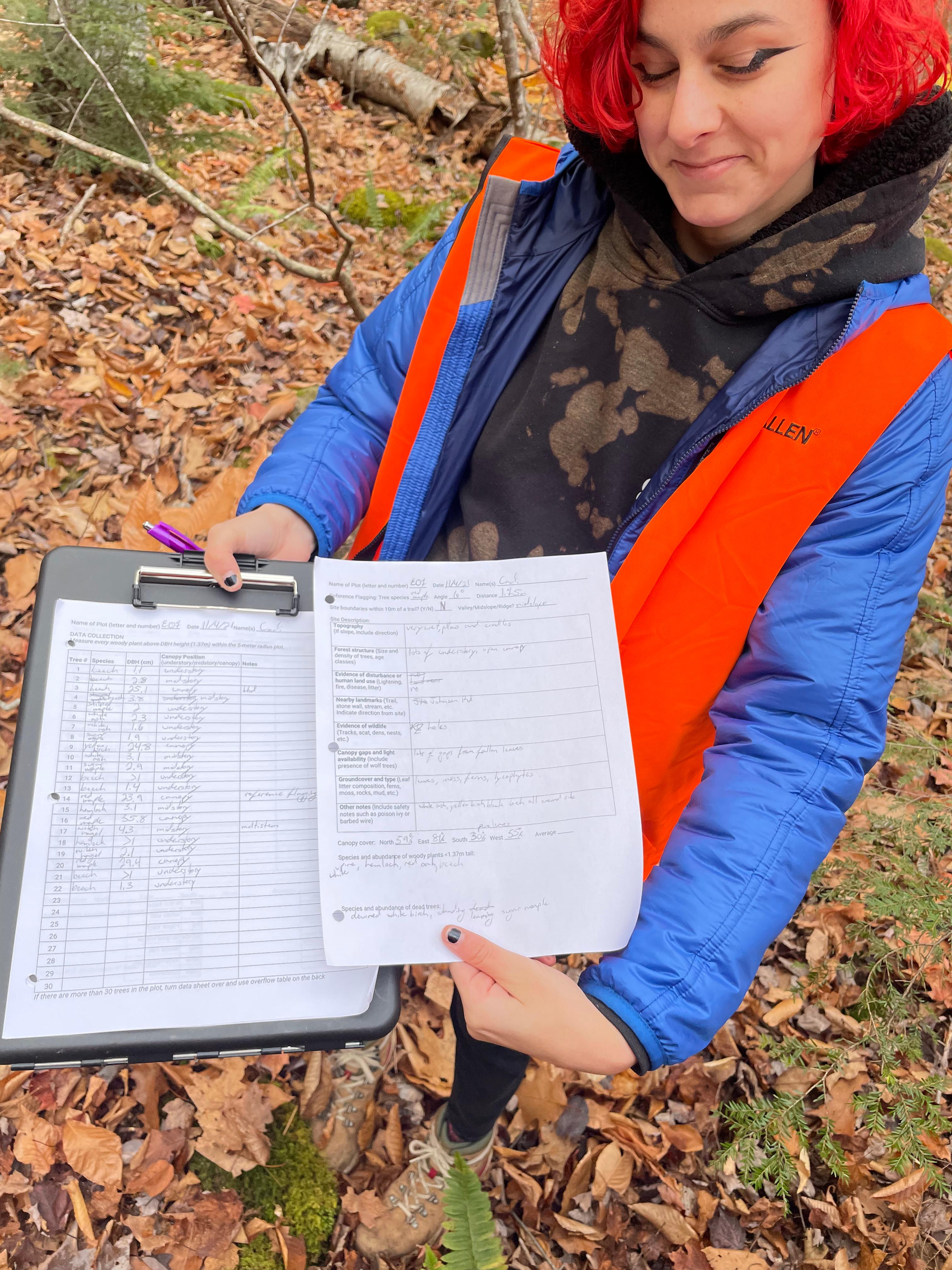 After being let out of the truck, we took a short hike to the first stake in the ground on the map. The bright orange stakes weren’t too hard to find with the GPS technology and flawless teenage eyesight. They neatly divided what we saw on the map into measurable pieces. The landscape became increasingly steeper as we traveled towards successive stakes, making some of the mucky and leafy terrain a bit difficult--at least for me. The others seemed like they knew just what they needed to do next.

Matthew told me that in effect they were measuring only 0.07 of the Woodlands, but in their work, they and other researchers could extrapolate about the biodiversity of what they saw by looking at a short circumference of string tied around the stakes--a plot of a five-meter radius. In essence, if you see what amounts to a few meters around the stake, our intrepid researchers can extrapolate the health and density of the trees in our forest. Sort of like polling data. From that mapping, our Proctor student-scientists understood which trees were thriving and which ones weren’t. They also could look at seedlings to understand the forest’s regeneration patterns and the density of tree canopies as measured by a densimeter.

Asking what I thought were rudimentary questions about the group’s tools and processes, each person showed me their work and the data they were collecting. I enjoyed watching how focused and engaged everyone was, and just how much they all got done in a short amount of time. Real-life work.

Of course, mapping the forests is just the beginning of the process for Laura and our students in conducting their own original research. But all group projects start with knowing what you are working with on our 2,500 acre plot of land. For instance, Matthew is knowledgeable about and studying Beech Bark Disease. He can look at and explain why some trees are healthy while just a few yards away, another tree may be riddled with signs of disease, or worse, rotted out and tipped over littering the forest floor. On the other hand, Aodhan is looking at wolf trees and stone walls in a project about land use history and wildlife. Wolf trees are these massive tree structures, propagated and nurtured by early Andover residents, possibly used over eighty years ago to provide more abundant shade cover for their plots of land, which were used primarily for animal farming and grazing. We could also still see remnants of stone walls that those residents used to demarcate their property from each other. According to Laura, other projects in the class include, “a study on temperature regulation in different forest types, a study on wind adaptation in leaves, and a study on noise pollution in the forest.”

The health of our planet depends on researchers in silviculture along with a host of other topics that we might be able to light a fire in a student or reader. When people ask how seasoned scientists decided to do what they do for a career, those scientists may very well point to a moment in time like the one I had with our Woodlands Research Team.

As far as we know, the Proctor Woodlands is one of the few forests actually being studied and managed by a high school with its students and teacher conducting the research.

I learned so much in this brief span of time in the forest with Laura and our students; I felt positively sated and satisfied with what I was seeing our students do - and become - but I still wanted more. Experiential education extending beyond the walls of Proctor is what many schools want to do, but we do it. Having a skilled and knowledgeable woodlands manager like Laura Ostrowsky who provides context and contours to what students study and learn is like having the best friend and guide any student could ever hope to have during their time at Proctor. Having students out in the real world, doing real work is what makes us who we are. Our future and future Woodlands Center will be populated by those people armed well with what every good scientist needs--curiosity, experience, knowledge, and strong connections.

This week’s blog had me thinking about the natural world around where I grew up in Robbins and Harvey, Illinois. A BBC story and video were made about the waterway called the Little Calumet River that I spent time playing near and running around with my brother and friends when we were growing up. I never knew its history. Now I do. And, so can you. You can find out about the secrets of the underground railroad on the Little Calumet: HERE. Enjoy!