The Journey: We Do Hard Things

On Wilderness Orientation, you never know what you might encounter and what you probably will need to get yourself through. A mountain of sand and gravel awaited our group as we entered the Willey Station Road parking lot off of Route 302, which was under repair. We retrieved all of our gear from the bus that then had to back down the trailhead road. Stuffed to the gills, we put on our heavy packs, adjusting straps and awaiting our turn in line to make the heavy climb up the trail on a very busy Labor Day Weekend. 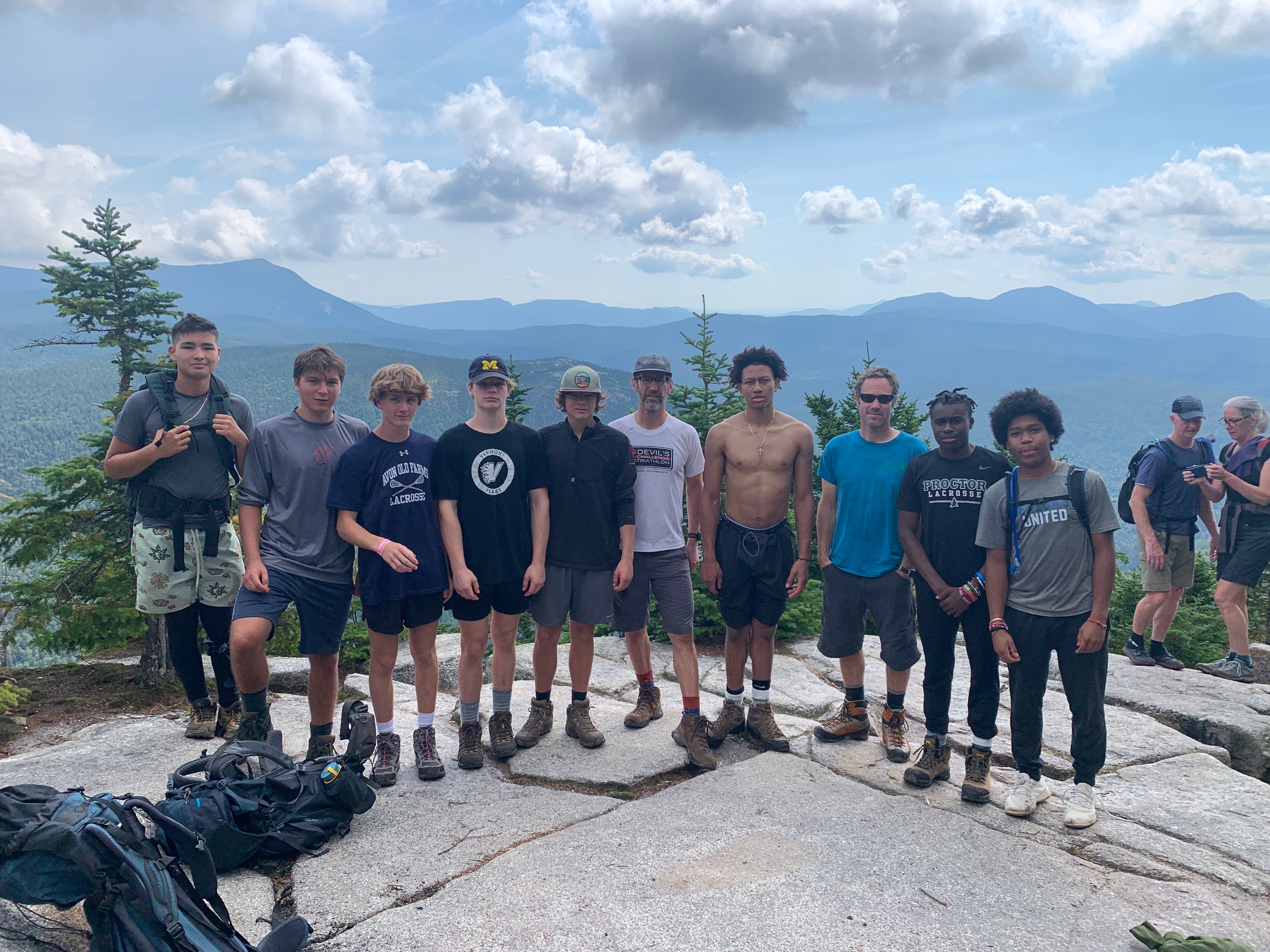 Last year, our group of seven freshmen boys, the senior leader, and us two faculty leaders ended our Wilderness Orientation hike from Ethan Pond from a grueling down, down, down to the same parking lot. I must admit, it took me weeks to feel like my legs belonged to me again.

This year, the same partner on the trails, Hunter Churchill ‘01, and I made the decision to do the  reverse hike, hopefully meeting up with the other Proctor group of students and adults out on Early O who would end where we began and who began where we would end. Our group of eight boys, all juniors and seniors, would do the same. After three minutes of the heavy pack climb, we headed straight up. As we hiked, I would occasionally glance down at my wearable watch to see it spike to 80% and then 85% of my beating hearts’ peak. I worried that these athlete boys would crush the trails and wind up waiting at various places for someone with “seasoned legs,” to keep trying to catch up.

To my surprise, that did not happen. The boys also were struggling with the hike. In our crew, the young, newly minted Proctor men were possibly the fittest by far because they each would be headed to early pre-season workouts for football and soccer. The clap, clap of our boots and my hiking poles hitting the stones and roots near the entrance of the base of Mt. Willey had us all together at a pretty steady pace, rhythming out our steps in time. 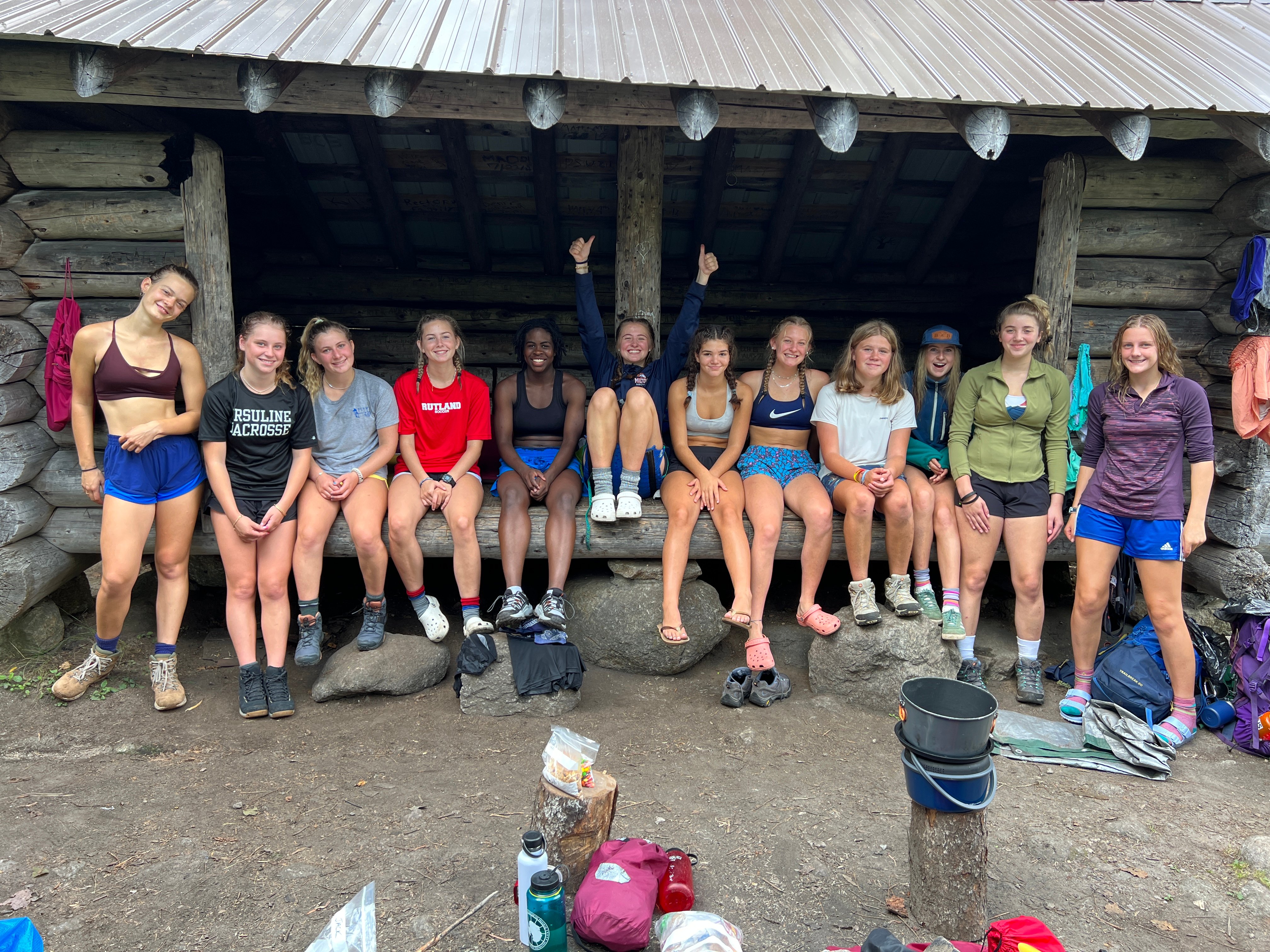 From the front of the line, Hunter often turned around and surveyed the boys and me for any signs of distress but he rarely had to wait very little time, unlike last year, before we hiked on, a few hours of our seemingly limitless time, to our final destination at Ethan Pond.

One of the new boys hung back with a huffing and puffing me, at one point saying, “My grandmother and I hike a lot. One time she told me the story of the tortoise and the hare. It’s not when you finish the race. It’s that you DO finish the race. That’s why I am going to be back with you to help you get through.”

In my elevated breathing, I could not muster up anything witty to say in retort, as I just tried to keep my heart rate steady and my legs moving up the mountain trail. What I wanted to say is: “Yep, like your grandmother, us old turtles have to stick together.” Instead, I just wheezed a little and pointed my poles meekly to where our group was traversing up ahead as if to say, “Onward”. 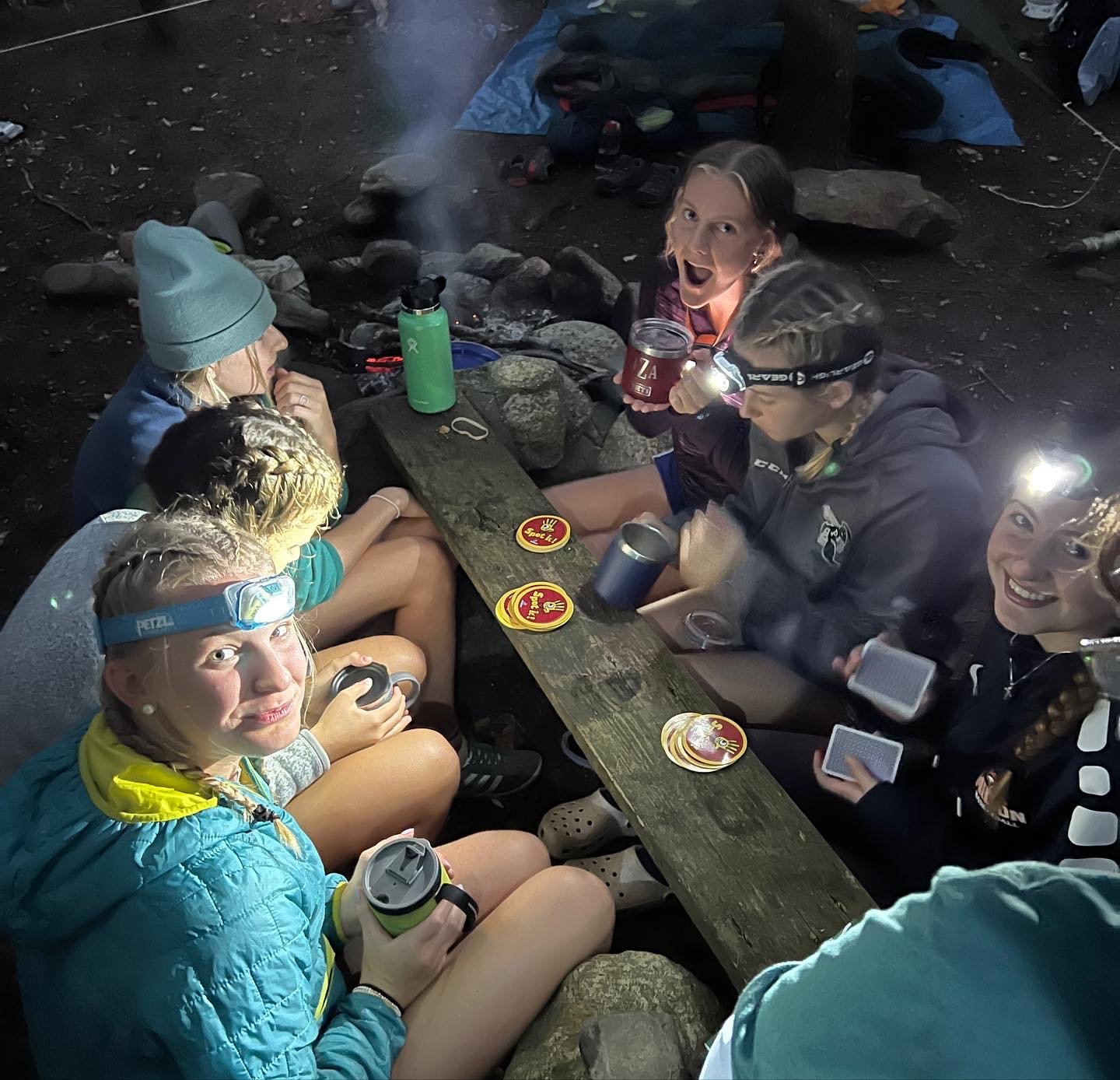 The opening sequence of the memories we were making was meant to start sealing the deal for us to become one unit. Quickly. On this trip, there would be cooking, laughing, and more than a few long hikes across some of the most rugged terrain any of us had ever hiked. The fascinating thing about doing anything the second time is that it feels easier. Even in reverse, a person’s brain fills in what is supposed to happen because it happened once before.

At one point on day three, one of our elite athletes who grew up in the desert Southwest of the United States just sat down in the middle of the trail saying, “I can’t do this anymore. I want to go home.” On the trails we often do each other a kindness with a kind word or deed, carrying a heavy pot or making a joke to lighten the mood. This time was a bit different. I said in response, evenly, “There is only one way out.” Again, pointing with my poles, “And, it is that way. We get picked up in two days and we literally are only halfway through. That is when we will see our bus and its driver again. Besides, yesterday’s hike was our hardest and we have something pretty amazing waiting two hours away.” 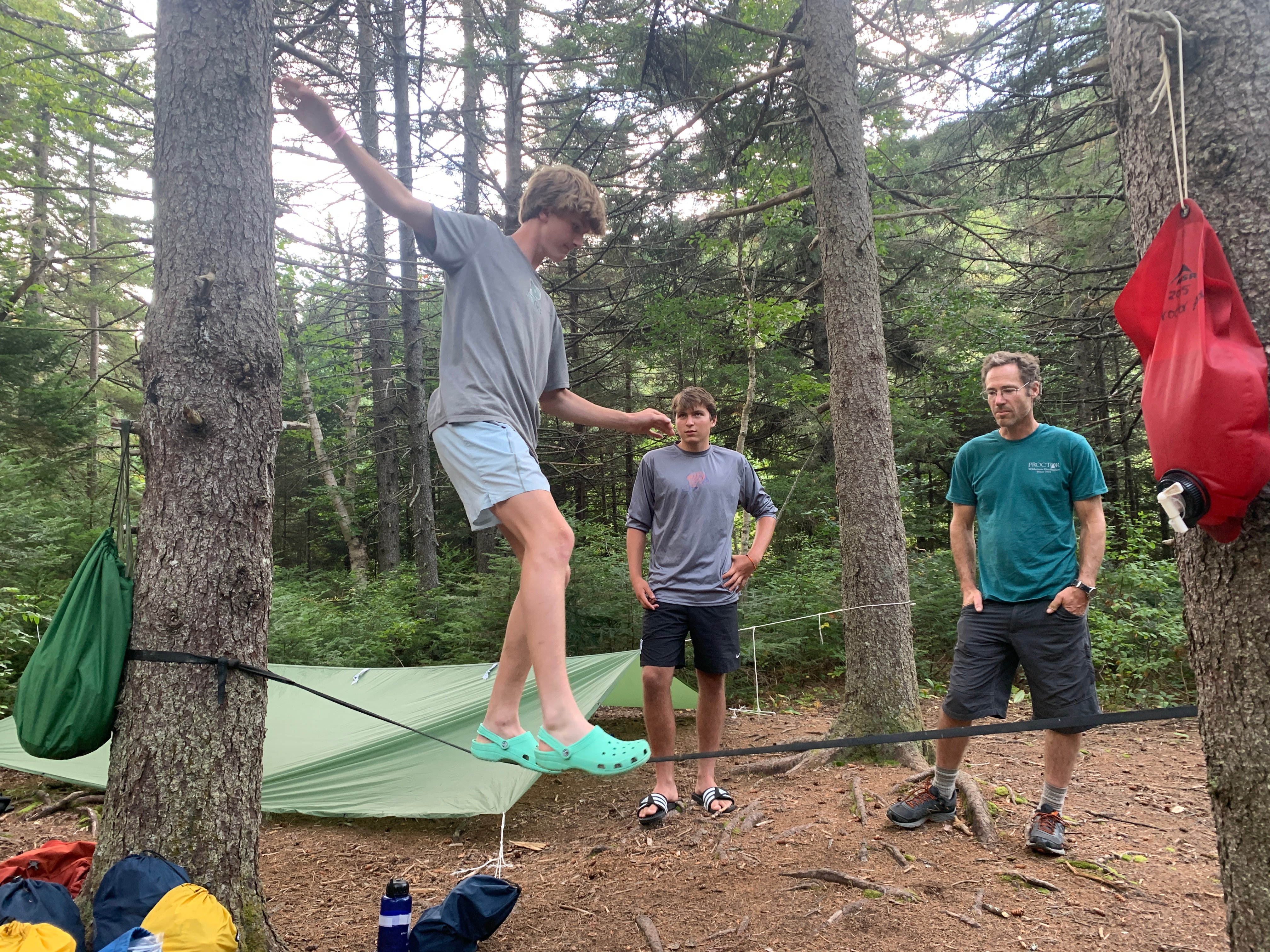 Our young athlete did not believe it, but he trusted and his feet moved again, which meant that we were able to move again. Just about everyone hits their limit on Wilderness Orientation. That is why we do it. It’s bonding with heavy packs, testing our boundaries for what we imagined school is for a short time. We got through it together. 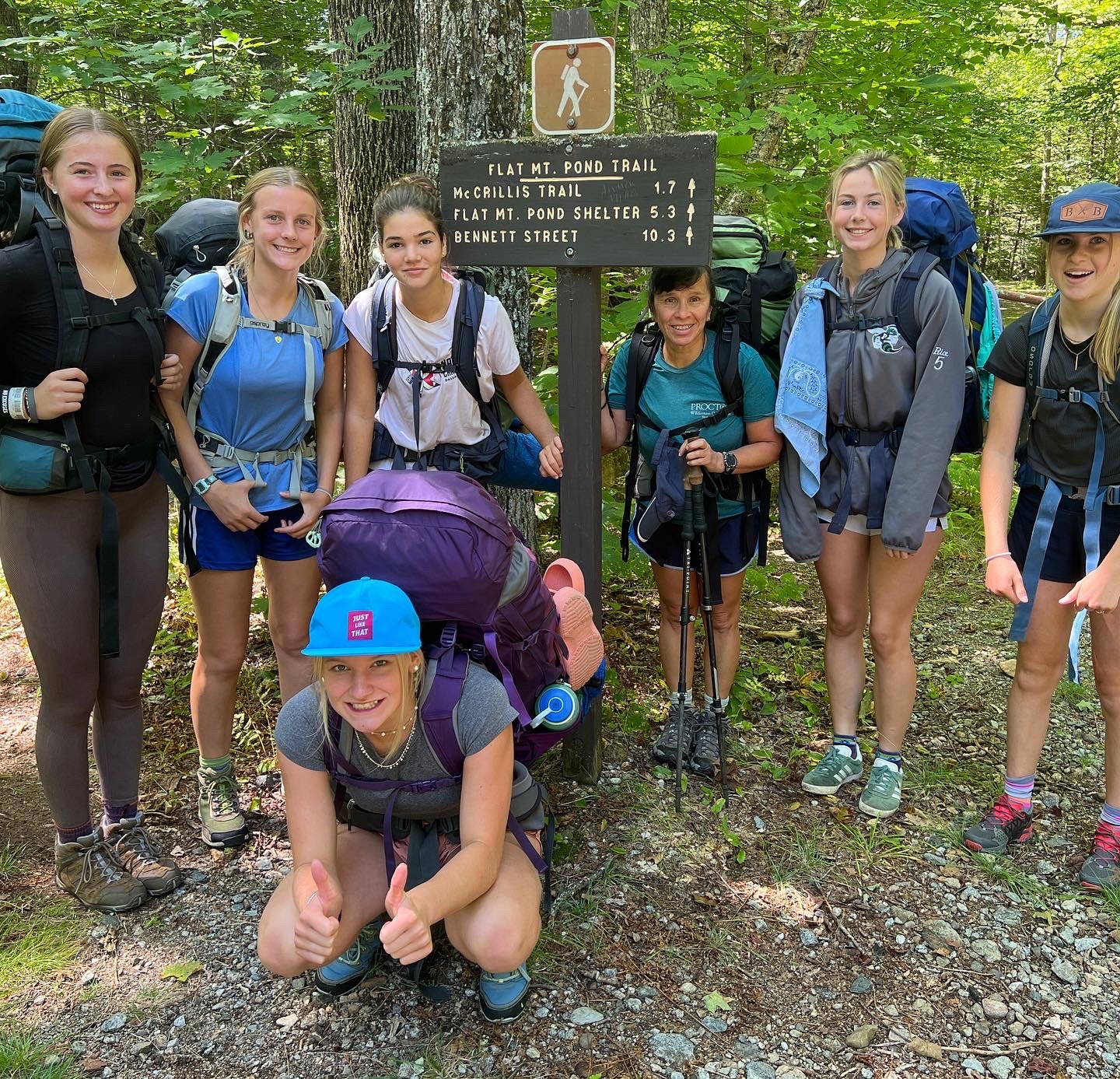 At the end of a short two hours of a beautiful traverse across the range to the Zeeland Trail, a stop at Thoreau Falls was our treat. None of the boys had been there. The young man who hours earlier believed he could not make it took several minutes to compose himself along the edge of the falls, realizing that the physical difficulties may have been homesickness instead. We ate peanut butter and jelly and Nutella sandwiches on pita, which tasted like the nectar of the gods after our hike.

The thing about our boys - and all of our students - is that they, and we, give permission to be and to feel. On Wilderness Orientation, you can break down and not always be your best self. You can make great friends and test yourself to the fullest. You can also be sad and want to go home.

Wilderness Orientation is not the National Outdoor Leadership School or even Outward Bound, but we at Proctor understand that putting students into challenging circumstances can bring out the true nature in people so that you strip away early having to feel like you are perfect. No one is. We will all hit an uprooted branch and go pratfalling forward, nearly losing our balance. But we right ourselves in the end.

At Proctor, Wilderness Orientation is what bonds us and propels us into the school year. On everyone’s mind at some point in our journey is “I just can’t. It’s too hard.” Our walk in the woods is a metaphor for the gristle and the toughness of a thing. How we conquer it in our minds. In the end, a beautiful waterfall might be the balm for home- and heart-sickness for who we thought we were, all because some mantra in our head got us through.

Indeed, hard things, we do.

Searching through the whole catalog of Henry David Thoreau’s poetry, “Ding Dong” is one that offers great sound imagery and pure delight. Read it: HERE. Or, listen to a reading at the link above after the blog.