We departed for Barcelona on Saturday morning, unaware that the Catalan language of Catalonia would surround us. The train ride from Madrid to Barcelona went faster than I had anticipated, but that’s what happens when one’s eyes are constantly stimulated by the beautiful countryside that’s just a glance out the window. After peering out the window and mentally preparing for our Catalan adventure, we arrived at the train station in Barcelona. Luckily, the weather was amazing in Barcelona; it was sunny and warm, just what we needed for a quick 20 minute walk to our hotel.

Once we were settled into our rooms we went to go get smoothies and snacks at a café near by. The café was cute and the smoothies were juicy and felt fresh and healthy, a perfect refreshment after a couple hours of traveling.

Then we took the Metro to the Sagrada Familia, the gorgeous cathedral still under construction, the epitome of tourism in Barcelona. It was unlike any cathedral we had ever seen before with creative natural stone work on the outside and towers almost as high as the near mountains. We climbed one of the towers...in an elevator and studied the city from high heights, taking it all in. We then receded down the treacherous spiral staircase and observed the interior of the stunning cathedral. The stained glass featured natural blue and green tones representing the sea and sky and adjacent to those grand windows were glass “mosaics” of orange, yellow, and red earthy hues, representing the sun. The columns that support the tall ceiling symbolize trees, and they branched off at the top in order to support it. 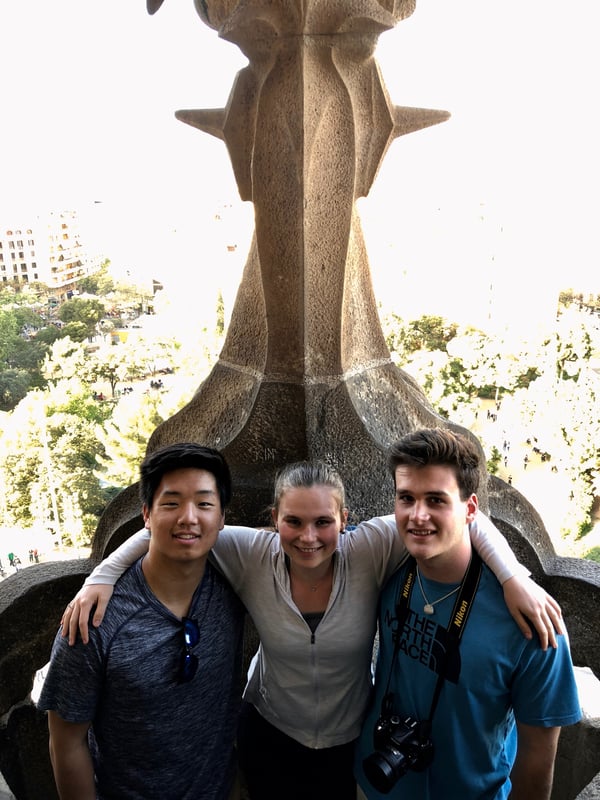 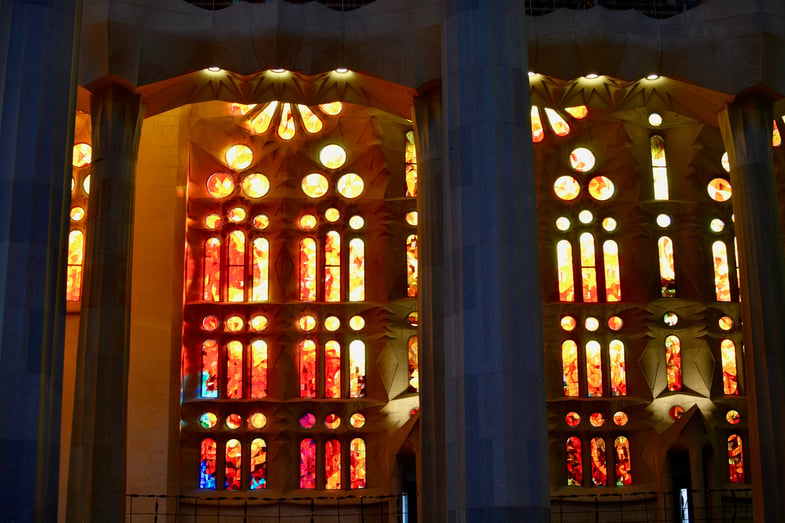 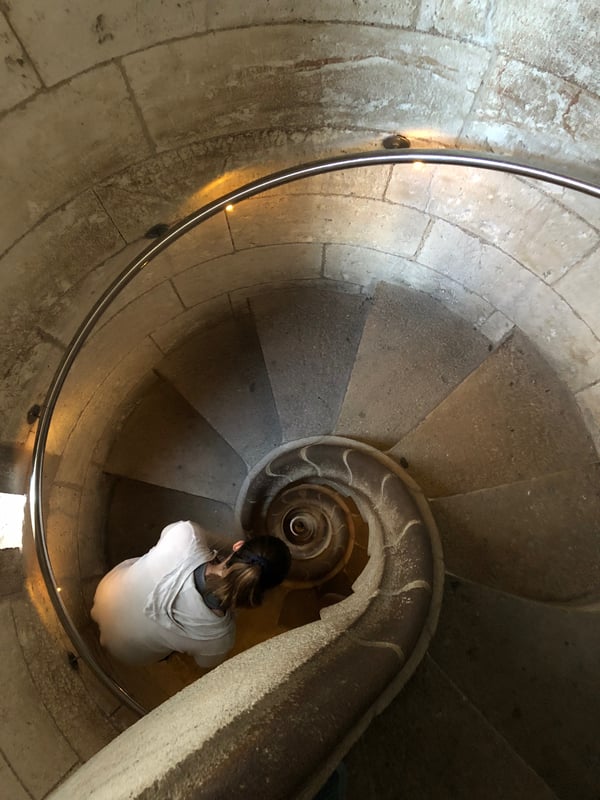 For dinner, we went to a sushi restaurant, which was exquisite! The fish was fresh and the people were kind and helpful. After dinner we walked around for a bit until we found an awesome gelato place! They shaped our gelato into roses which is where they get their name from, Gelarto Rosa. Walking around Barcelona after FC Barcelona had just won an important soccer match (Copa del Rey) was excitement in and of itself; everyone was thrilled and there we were, Americans, just eating our gelato. 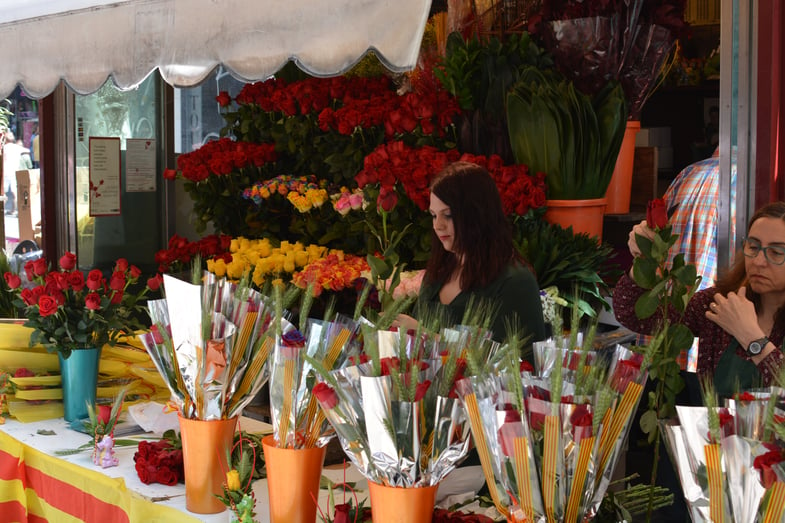 The next morning, after breakfast and work time at a neighborhood café we took a tour of the Gothic Quarter with our own personal guide, Ryan! Before reaching the Gothic Quarter, we walked down Las Ramblas, the street where the terror attacks happened last August. The street was lively and packed with flower stands. On Monday Barcelona celebrated Sant Jordi, a celebration in honor of the patron saint of Catalonia, where women receive a flower and men a receive book. I would never have guessed that the street I was walking on was the place of a terror attack less than a year ago; the Barcelonan people truly did take the area back and make it a safe, happy place. Thankfully, the Gothic quarters streets are narrow enough so that they are protected by shade, because it was a very sunny day. A walking history class is truly the best example of experiential learning; as we walked though this old but restored area, Ryan filled us in on all we needed to know about what it would have been like to live there centuries ago. 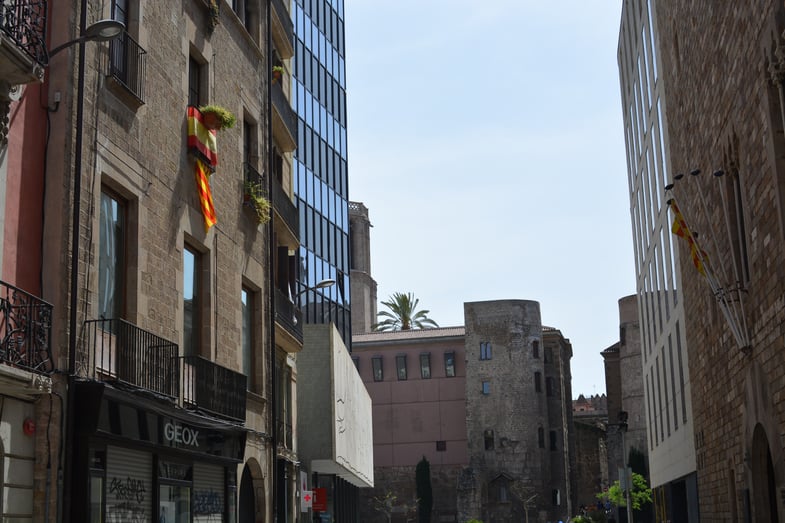 Political statements and symbols abound in Barcelona these days. Above a Spanish flag and Catalan flag hang together, a symbol of unity. 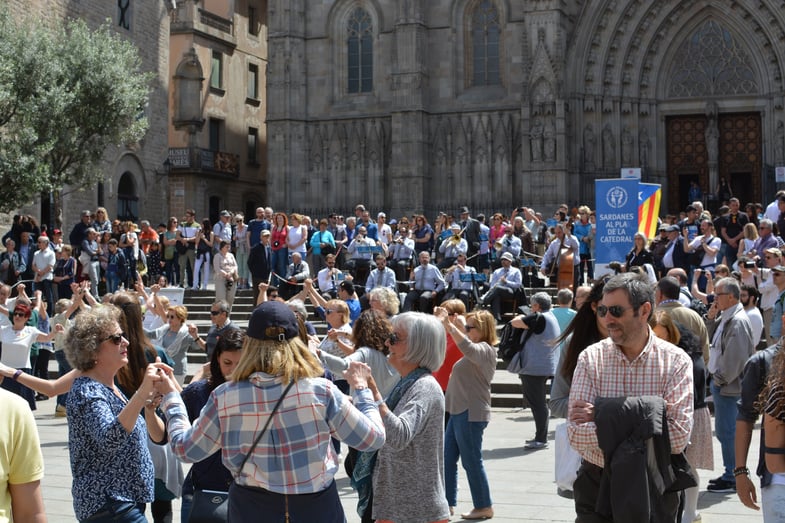 And just around the corner people dance the traditional Catalan dance, the sardana, with a Catalan independence flag visible in the background. 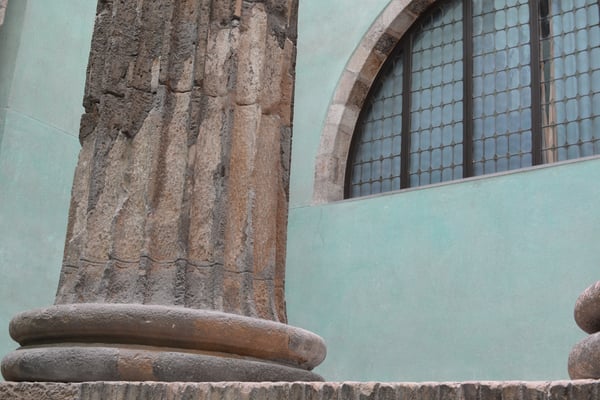 Before dinner that night, we went to Montjuic Castle, to look over both Barcelona and the Mediterranean. I did a short presentation for history class on the beautiful fortress with a gruesome past, and then we packed ourselves into a bus and headed back into the center of the city. For dinner, we went to Paco Meralgo (which Laura pointed out is a play-on-words for “pa’ comer algo”), and the tapas were sensational. My favorite was the veal carpaccio with foie gras. 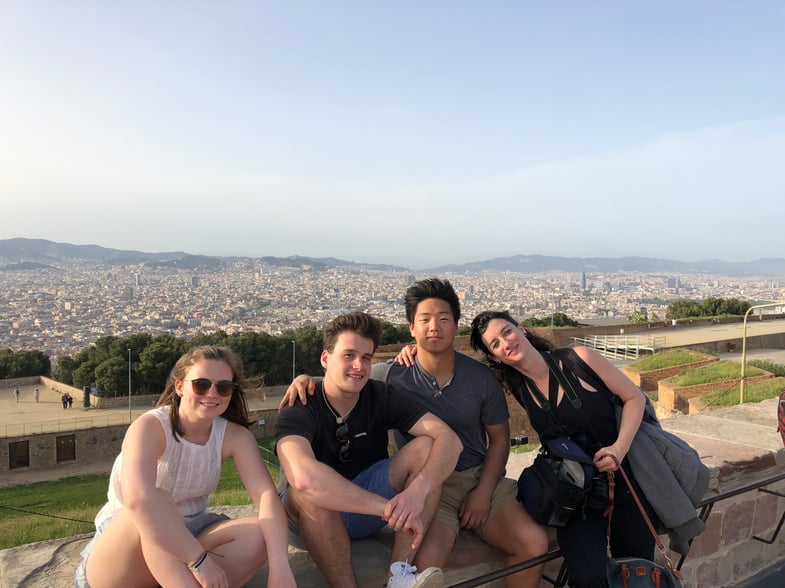 The view from the castle of Montjuïc.

The next day, after smoothies at the market and breakfast at a cafe we departed for the countryside of Cataluña. The drive was fast because the scenery was so breathtaking. We stopped at park along the beach to eat our bocadillos, which consisted of ham, cheese, and avocado, on a baguette. We over looked the stunning Mediterranean Sea as we discussed the site’s Greek and Roman history and ate our bocadillos; it was magical. 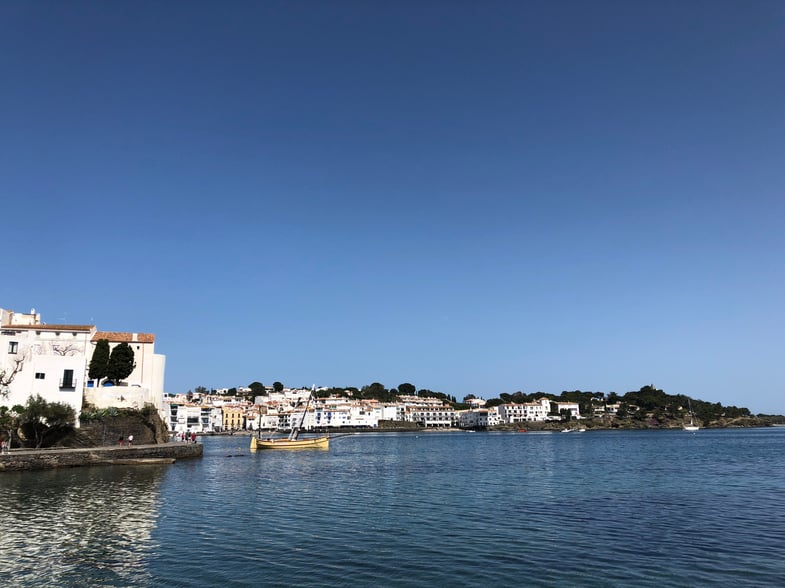 We then drove to our 13th century fortress-slash-home for the next few days. There was a pool outside, which David utilized everyday. Although, the water was cold the area was stunning and the history of our home was incredible.

The next morning we woke up, surrounded by fields and sun. We made breakfast and ate out on the porch, breathing in the fresh air, and finding a new appreciation for the simplicity of life. After preparing our bocadillos, we departed for Cadaqués where we would spend our day hiking along the Catalan coastline. The first half of our journey was the most challenging, but then we saw the beach where we were to eat our bocadillos. It felt like we had found an oasis. The sun was strong and hot, so immediately after we got to the beach, we took a dip to cool off. 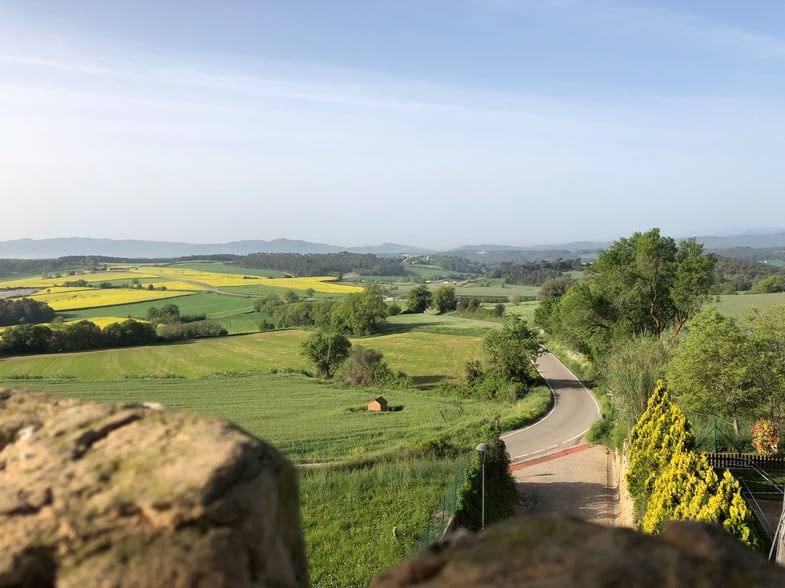 After our 9 kilometer hike we returned to the fortress to make dinner. But, before anything else, we had to take a dip in the pool! For dinner, we made barbecue chicken with an arugula, baby tomato, avocado, apple, goat cheese salad on the side, and sweet potato fries, along with goat cheese toast and Laura’s bizcocho (a Spanish cake) for dessert. We sat out on the porch and ate like kings! 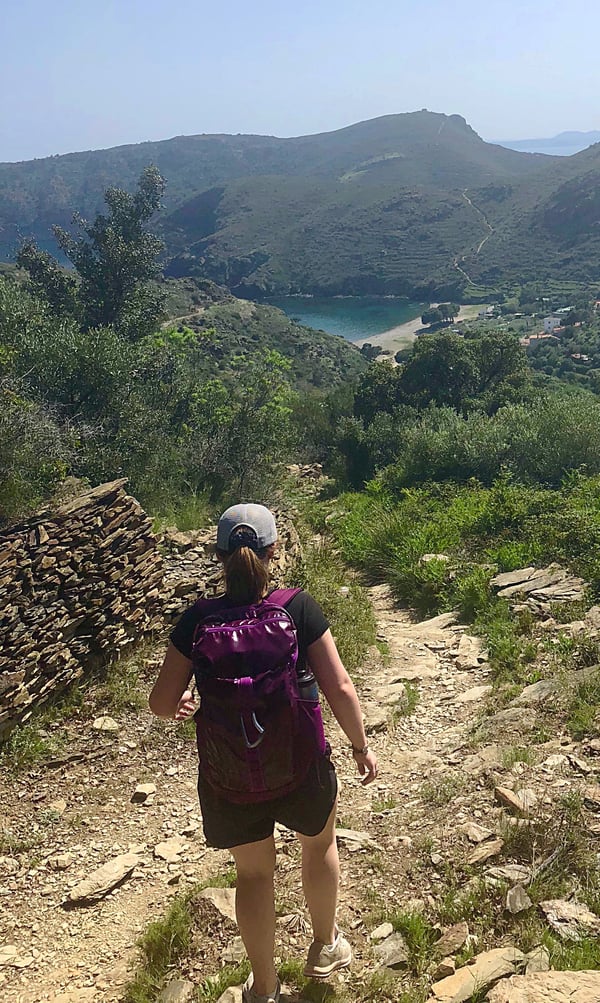 The next day we drove to Carcasonne, France, with a quick stop in Besalú, Cataluña. Besalú is a small town with a big political opinion; the rural town is pro-Catalan independence, and they are not shy about showing it. There are yellow ribbons (signs of support for independence) across all of the bridges and there was a huge banner hung, saying: “EUROPE WAKE UP, FREEDOM POLITICAL PRISONERS!” 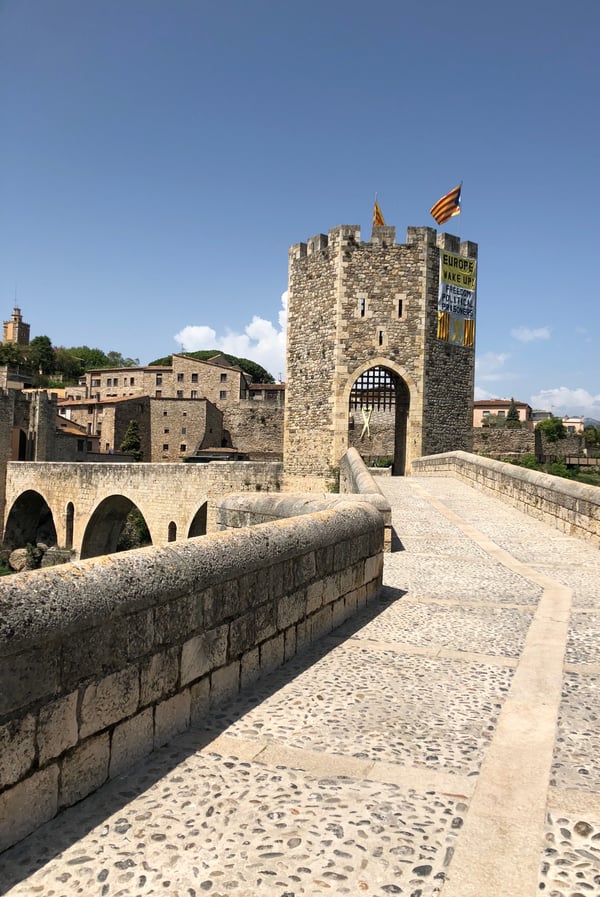 When we arrived in Carcasonne, France we immediately, went to the old city, La Cité, and explored the castle. We walked around the wall and looked at the rose window in the cathedral within the wall. Then we had a bit of time to explore by ourselves and got macarons. After that we went to dinner in the new quarter and struggled to speak the little French we all knew. Once we finished dinner we walked around the vacant streets, which felt funny to us because it was still so early by Spanish standards. 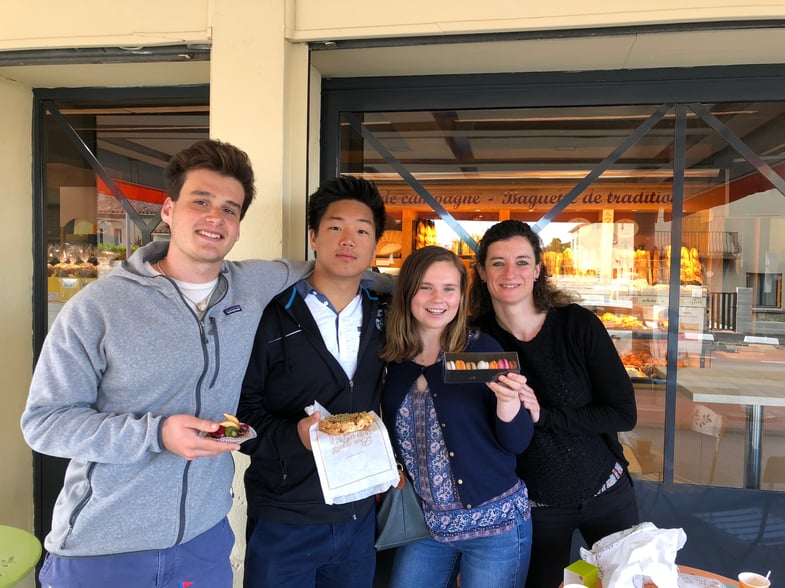 No trip to France would be complete without a stop at a boulangerie! 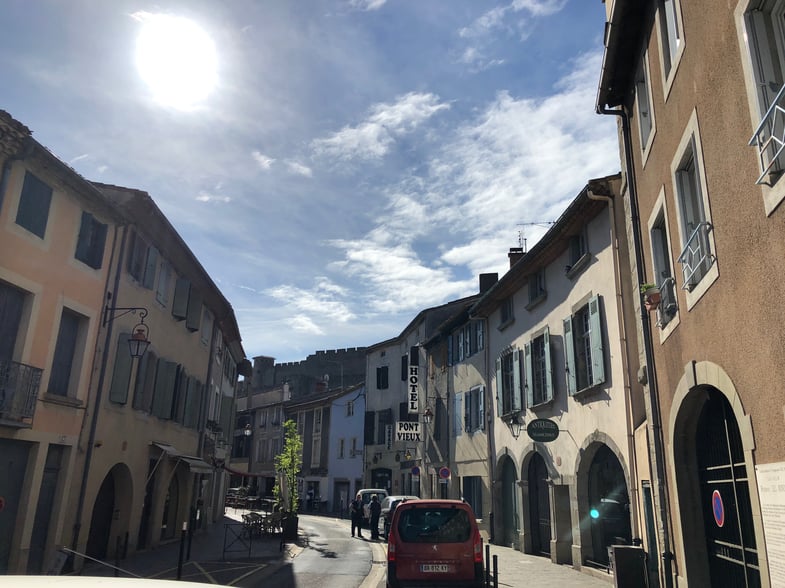 And just like that the next morning we were driving back to Barcelona to take the high-speed train home to Segovia. From taking the metro in Barcelona after a big win to hiking along the Mediterranean coast to walking along 1000 year-old wall, this past excursion was definitely an adventure.