Over the past two weeks, guest educator John Around Him has shared his own experiences, insights, and perspectives with the Proctor community. He shared his voice, a voice not heard often enough in our classrooms. A voice strengthened over four decades of living in different worlds: growing up on Pine Ridge Reservation in South Dakota, enlisting and serving overseas in the US Army, attending and graduating from Dartmouth College, working as an educator in inner city Baltimore. His is a voice layered with wisdom that encourages students to think beyond themselves to the context of their life, “The new challenges we as humans now face can be frightening. To this I say be patient. It won’t be long before powerful voices from this new generation of young people, at Proctor and elsewhere, come all the way out, voices that will channel clarity into our minds and wring fear from our hearts to do what’s right.” 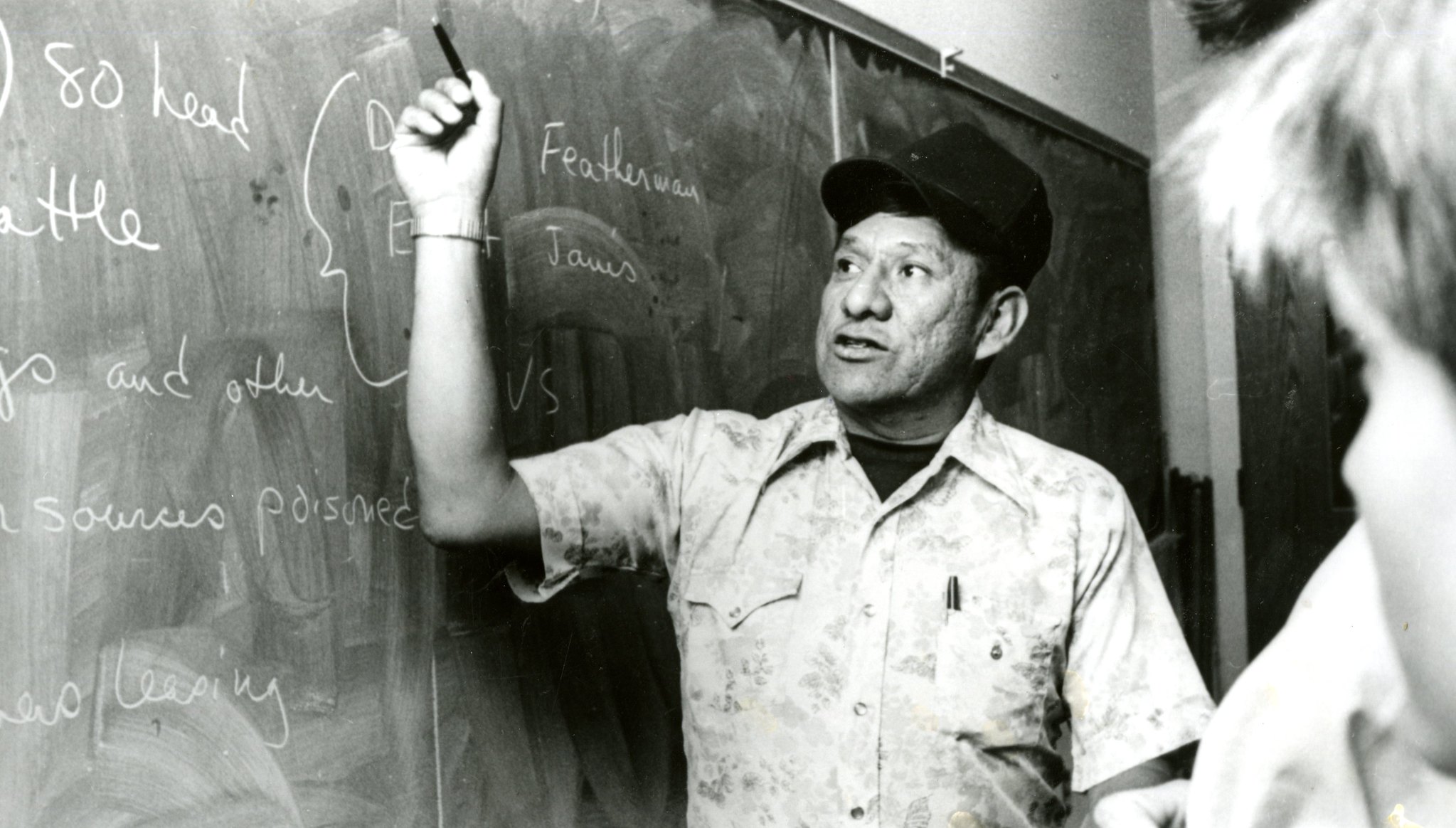 An early stop on John’s journey brought him to Proctor as a small child where his father, John Around Him (above), worked with Albert White Hat and George Emeny throughout the 1980s and early 1990s to establish a partnership between the Lakota Sioux of the Rosebud and Pine Ridge Reservations and Proctor. This friendship between the two communities grew over time into a Native American Program at Proctor that has broadened the perspectives and enriched the experiences of thousands of students and adults in both South Dakota and New Hampshire over the past four decades.

These deep rooted bonds are watered regularly through summer trips by faculty, staff, and students to Rosebud to connect, learn, and recenter our relationship with our Lakota family, and through regular visits to Proctor by John, JR White Hat ‘00, and Emily White Hat ‘94. As John reflected after his last two weeks teaching at Proctor, “It is always amazing to see students think critically about difficult histories, such as those of Native people. Proctor students do this with such humanity, which is refreshing given the current political climate. Listening to them during my classroom visits has given me so much hope for the future. It was awesome to see those students who, reticent at first, find power in their voices.”

Encouraged by John’s approach to the classroom, these student voices emerge in different ways. English teacher Tom Morgan reflects on his collaboration with John over the past four years (read more HERE), “It is a gift to teach with John Around Him. John zeros in on some of the most contentious topics that we are currently wrestling with as a society—issues of race, privilege, and identity—with generosity and care. His gentleness and his good-natured approach create a non-judgmental atmosphere that allows students to share deeply and with conviction.” He adds, “One sign that John connects with our students is this: at the end of our last class together, a number of students broke out into muted, or maybe even awkward, applause; as if they knew it wasn’t customary to applaud after a regular class on a Thursday morning, but the conversation was so necessary, the applause couldn’t be helped." 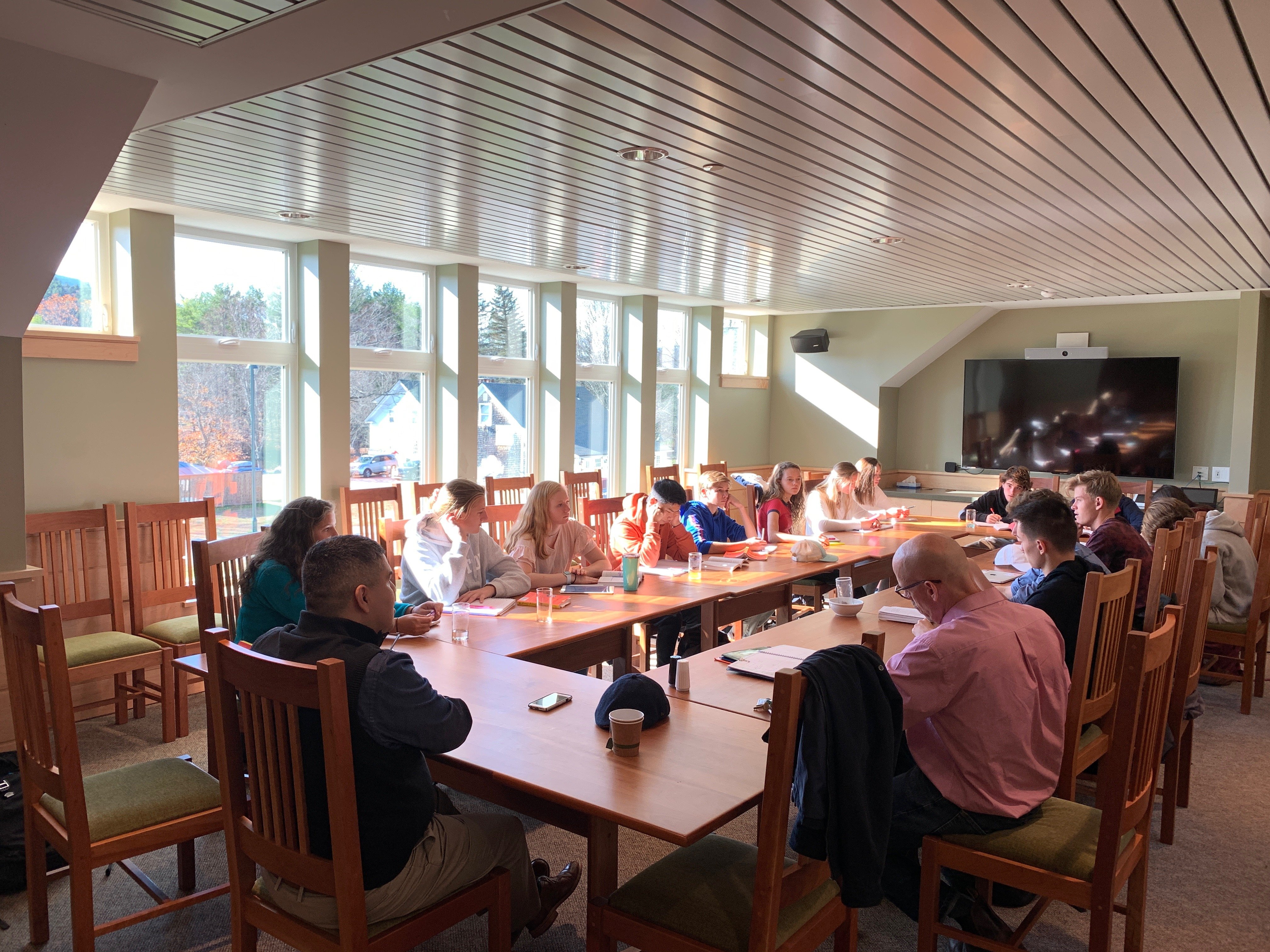 In Peter Southworth’s American Literature class, this uncommon student vulnerability during a discussion of There There was evident. Certain voices were more powerful than others, more confident, more ready to share their narrative with the group, but as you scanned the room, you could see the gears turning for each student. John shifted the conversation to the topic of addiction on the Reservation. One student offered, “If someone doesn’t want to quit, they aren’t going to quit. It doesn’t matter if it is Juuling or smoking or whatever.” Another expanded, “They feel trapped in a state of dependency. They are weighing the euphoric feelings they anticipate with use, and the desire to quit. It’s not about the drug itself or society’s effort to help them quit, it’s about the underlying issues in their life that are not being addressed.” And then a third, “Addiction is so much more deeply rooted than how the problem presents itself. Are we treating the symptoms or the root of the problem? Here at Proctor? On the Reservation? Aren’t we just seeing problems and trying to fix them rather than really addressing what’s wrong with us?”

This honesty and introspection blossomed in each class John visited. Culture and Conflict, a co-taught honors level humanities course, teachers John Bouton and Caroline Murphy observed their students wrestle with content in a whole new way, “John has a remarkable ability to sustain rich conversation around a single question, the extent to which each of us consider ourselves immigrants to the U.S. Our students asked him probing questions that took us in powerful directions, including a future text for our class, Roxanne Dunbar-Ortiz’s An Indigenous People’s History of the United States.” Bouton and Murphy added, “His welcoming demeanor, quiet ability to challenge assumptions in an inviting fashion, and especially his vulnerability and openness in sharing aspects of his experience proved a transformative learning experience.”

Our role, our responsibility, is to intentionally move our students outside the bubble of their lived experience toward greater appreciation and understanding of the lived experience of others, while encouraging students to find their voice. The conversations that began with John over the past two weeks are merely a start, not an end, of an essential exploration of our own identity and privilege in relation to our voice. We are thankful our classrooms afford an environment for these conversations to evolve and that we have visiting educators like John to challenge us in our journey.