Last Sunday afternoon I walked through the Norris Family Theater to the sound of power drills and pieces of the set for The Foreigner thumping to the ground. The living room, the fireplace, the windows, and the doors – everything was gone. Where the night before there had been the beckoning magic of Cooper and Amanda conjuring a separate reality, now screws clattered to the floor and lumber was being stacked. Jacob pushed through with a broom, a visual cue to the lessons of deconstruction. Moment passes to moment, season to season, term gives way to term.

The weather plays its part, too. Two weeks ago (image on the right below) the state plows were winging back winter storms. Snow banks towered. Ski coaches mused and wondered if the season would last through the last days of April. Maybe into May? So much snow built up on the ski hill that before one race all the B-netting had to come down and Garry George pushed it off the trails with the cat. Today? Coaches worry about drilling through snow and into mud to set gates for tomorrow’s practice. The last two weeks of wind, rain, cutting fog and record temperatures reduced our snow pack to three or four inches (image on the left below taken earlier this week). The turf fields are clear, the Blackwater River has flooded. While the climate of unseasonable warmth might retreat for the weekend, the change has already been wrought: winter is over. 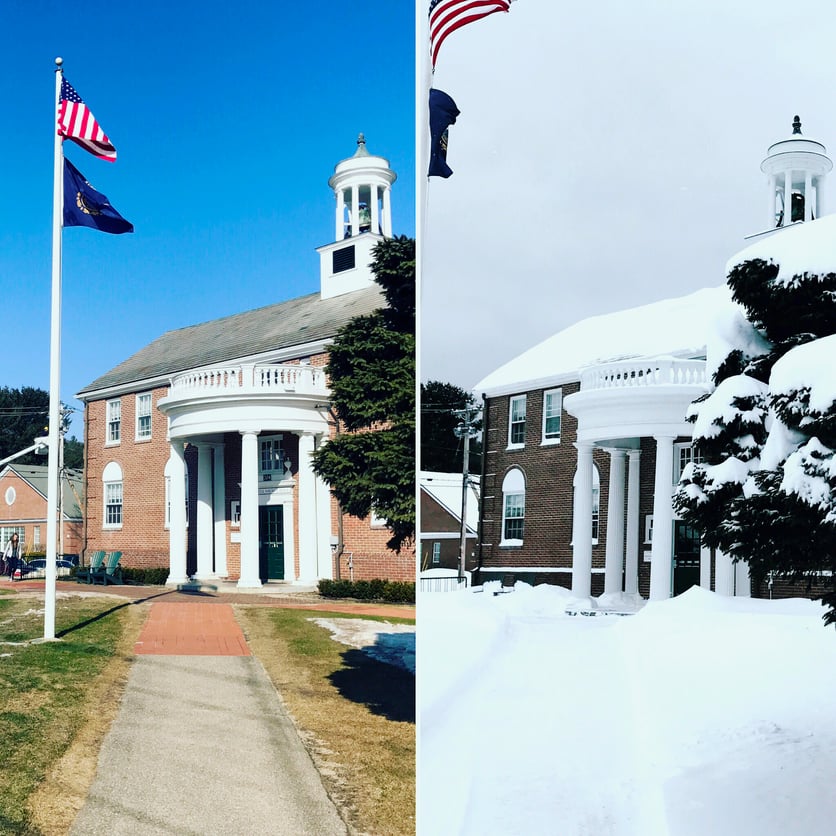 We still have skiers heading off to races (if they can find the snow), and the boys and girls’ basketball teams play on through tournaments this weekend. These are culminating moments for individuals and teams, much like the performance of The Foreigner was a culminating moments for cast and crew in the theater. The level of play is the highest of the season, the competition is the fiercest, and yet the calendar and the game clock reveal their truths that the inevitable final second of a game will be played, the last line of a play spoken, lockers will be cleared out, sets struck, and the next season will begin as the last one ends. The pull back of snow on the fields reminds us: this tidal flat from winter will inevitably green.

There are many, and one for me came last weekend in the “Ted” during the varsity boys’ hockey game against Tilton for the Lakes Region championship. Yes, we won the game, but I most remember the fan mosh pit, the clanging of cowbells, the roar of students after a goal, the litter of gloves and sticks on the ice after the final second and players hurling themselves against the glass and towards their cheering friends. The energy curled like a wave, swept through rink and for a moment it felt like we were at our best, just as we feel like we are at our best when a play goes up, when an art show is hung, or when a ski race is run. These culminating moments are intense, wonderful…and ultimately passing.

Today, we lean towards spring while remembering the best of the term just passed.