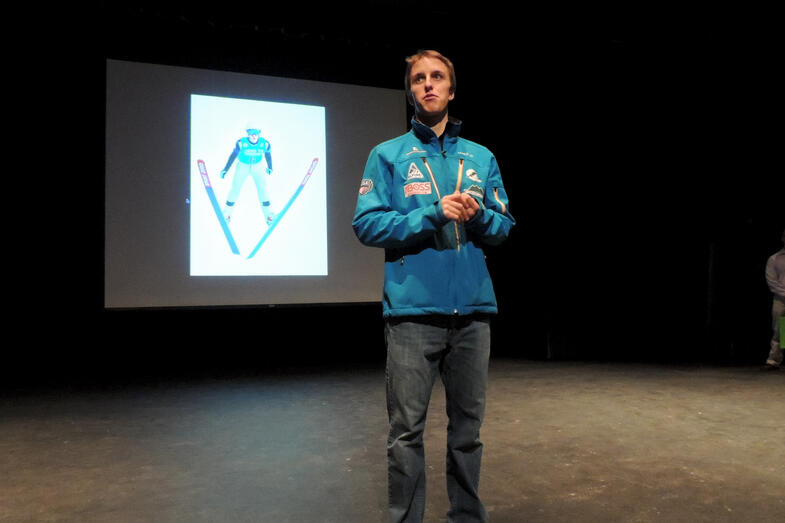 While we are incredibly proud of Nick’s accomplishments as a jumper, it is his willingness to close the circle of education by remaining engaged with Proctor athletes through ski jumping clinics and other training sessions that is most impressive. Even after a serious spinal injury during an international competition this month, Nick continues to inspire those who know him as both an athlete and as a person. To learn more about how the international ski community has rallied around Nick, read THIS article. Visit the link at the bottom of the page to join the hundreds of individuals from around the world who are supporting him.

Last winter, Proctor was honored to have Nick stop by assembly and share his story as an Olympic athlete. His story was inspirational to all, but sparked a keen interest in the sport of ski jumping for Chace Lewis ‘16 (Martha’s Vineyard, MA). Just prior to Nick’s visit, Chace approached Proctor ski jumping coach Dave Kenney and asked if he could try it out. A former downhill and recreational skier, Chace wanted a new challenge, one he had never experienced before. After his first practice session with the team, Kenney knew immediately Chace possessed remarkable body control while in the air. He very quickly grew from Proctor’s 10 meter jump to the 18-meter, and eventually to jumping confidently off the 38 meter jump at the Proctor Ski Area. He made this progression quickly while only practicing part-time with the team.

Kenney notes, “For our last practice of the season last year, we traveled to Lebanon, New Hampshire to use their 50 meter jump. This was a first for Chace, but he still wanted more. This winter, Chace decided to jump full-time as an afternoon activity and his hard work has paid off.” After last weekend’s meet at which he won the 50 meter jump competition, he qualified to compete at the 70 meter jump in Salisbury, CT on February 7-8. Kenney adds, “As a coach, it is such a pleasure to have Chace on our team. From his willingness to work on the hill, to his coachability as we seek to refine his form, to his willingness to help teammates with their form, what he has done accomplished as a jumper in just the past year is pretty amazing.” 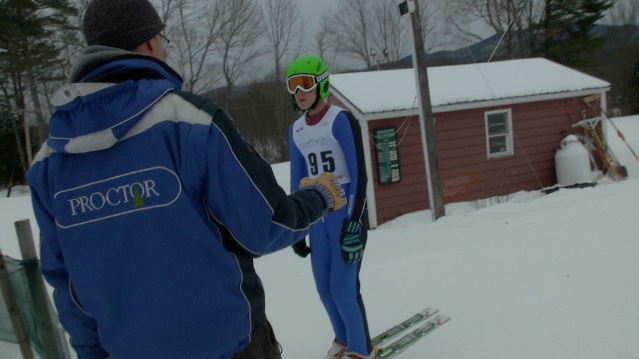 This is an exciting time for Proctor’s ski jumping program and we wish Chace the best of luck next weekend on the 70M jump and attempts to qualify for the Junior Nationals. While many have contributed to the long-term success of the program at Proctor, alums like Nick are a big part of inspiring another generation of ski jumpers at Proctor. This type of inspiration doesn't just happen in ski jumping, however. Stay tuned for more stories from our alums who continue to give back to Proctor in both tangible and intangible ways!