Proctor Academy is thrilled to welcome the artwork of Jordan Thompson '01 and Emily White Hat '94, P'14 to campus as we celebrate Native American Alumni weekend. Jordan and Emily's work is displayed in the Fowler Learning Center, complementing another on-campus exhibit in the Brown Dining Commons by former parent and trustee, Bill Peabody's P'82, '86, Honorary Trustee collection. We invite you to join us in celebrating the work of Bill on Friday, May 4 at 12:30 pm in the dining commons and the work of Emily and Jordan on Saturday, May 5 at 6:30 pm in the Lovejoy Library. Learn more about this talented group of artists below.

Emily R. White Hat '94, P'14, J.D. (Nape Waste Win, "Good Hand Woman") Sicangu (Rosebud) Lakota, of the Aske Gluwipi Tiospaye was born and raised in South Dakota. Emily is the Director of Strategy and National Outreach at the American Indian College Fund where she is working with tribal colleges and universities to develop and implement capital infrastructure projects, assists in capacity building, concept development, strategic planning, and national outreach. Emily enjoys quilting, beading, horseback riding, and hot yoga. Emily learned to bead when she was four and started sewing when she was 8. She sewed her first patch quilt by hand, and started making star quilts in 2001 when she was in college.

Historically, and still today, a well-tanned buffalo robe is considered a respected gift because it provides shelter and everything one needs for comfort and would last for a long time. In modern times the star quilt replaced the buffalo robe as the population has been reduced. The star quilt reinforces the relationship of the Lakota with the stars and the ancestors and relatives that have gone on their journey before us bringing creation together. The star is a symbol of unity representing “Mitakuye Oyasin” (we are all related).

Jordan was born in 1982 and raised on the Akwesasne Mohawk Territory on an Island on the St. Lawrence River. He is turtle clan and his Mohawk name, Tehaweiakaron, translates to “Wide Wingspan” or “Broad Shoulders.” Jordan currently resides in the Territory with his wife and twin boys. Jordan attended Akwesasne Mohawk School until eighth grade and graduated from Proctor Academy in Andover, New Hampshire.

Jordan went on to complete a B.A. in Art from Plattsburgh State University (’05) and a M.A. in Early Childhood Education from Potsdam State University (’08). Throughout secondary and post-secondary school, Jordan worked on youth related projects that provided educational and recreational experiences. Jordan has teaching experience at the elementary level and has mentored students in high school who wished to pursue higher education. 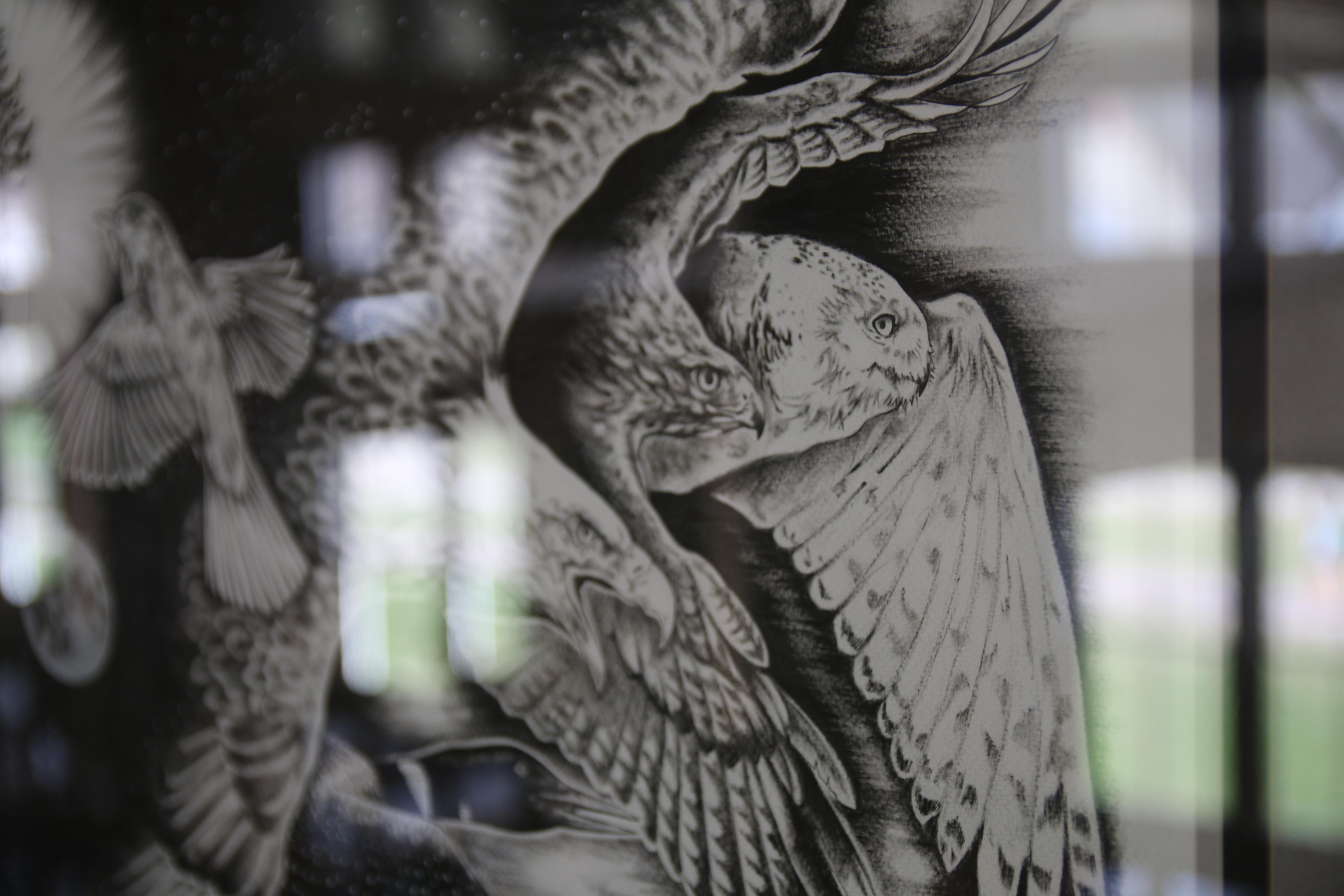 Jordan is also an accomplished athlete playing lacrosse and hockey throughout his youth and into post-secondary school. Jordan has been an artist from a very young age. Early art work included drawing animals, cars, cartoon characters, and his favorite sports players. In high school, Jordan took formal classes, which allowed him to experiment with various mediums. His attention to detail and ease with the subject led him to realize his potential in University where he refined his pen-and-ink technique and formalized his art. Jordan draws his inspiration from the Mohawk culture. His art conveys emotion, spirituality, intensity, pride, and power from the perspective of a young Mohawk man. His connection to his large family, his experience in teaching and mentoring, his sports experience, and his Mohawk culture are all expressed in his art.

William N. Peabody is an artist in communication with places. They speak to him, and a rich dialogue is created in his work. His early connection to places began with, as a child, he followed streams, taught himself to catch trout with his hands, and dreamed in the hills of Vermont. Eventually, this was where he and his wife, Betsy, raised their three sons. It was here that his connection to the earth, and sensitivity to how building and structures frame the land, began to inform his painting.

From the beginning, this art reflected his diverse life. His background as an Episcopal priest, parent, farmer and family counselor, have enriched his vision as an artist. He has investigated a variety of mediums with the same philosophical and practical spirit with which he has explored life. He has worked at print making, monoprints, metal sculpture, acrylic on canvas, and now encaustic wax on wood.

During trips on the San Juan River in Utah, the home of the Anasazi Indians, he produced a body of work on sketch paper. These images fed into the artistic visions of monoprints and paintings. His past acrylic on canvas work reflects both the streets of San Miguel de Allende, Mexico, and the houses, barns, and lake communities of New England. The resulting paintings are not literal, yet describe recognizable places. They are poetic expressions which draw together the visions of time and place.

His current works introduce the use of encaustic wax, the ancient medium. This body of work comes mostly from photographs taken on location in the New England states and San Miguel de Allende, Mexico.

In addition to the rich gallery experience on campus this weekend, Proctor's own student artists will also be showcasing their work at both the Whipple Hall Gallery in New London, New Hampshire and the AVA Gallery in Lebanon, New Hampshire on Friday evening. The Lake Sunapee Center for the Arts will feature the work of a group of Proctor students in their micro-gallery project, with the Proctor student work being displayed from 5:30 - 7:00 pm at Whipple Hall. The AVA Gallery will also be celebrating the work of Andrew Harrell '19 (woodworking) and Toby Bannister-Parker '18 (painting) on Friday evening from 5:00 - 7:00 pm in their "Winners" exhibit from this winter's High School Awards Exhibit. Learn more here!