Community: What You'll Learn from Your Roommate

With more than two-thirds of Proctor's student body residing in dormitories, navigating life with a roommate is a reality. While most first year students have never shared a room with anyone other than a sibling, the opportunity for personal growth and the formation of deep friendships makes having a roommate one of the most powerful experiences at Proctor.

We know not all roommates are created equal, but we do our best to pair each incoming student with a roommate of similar interests and living habits. Some new students choose to change roommates after their first year at Proctor, while others may keep the same roommate for all four years at Proctor! Here is what a few members of the Class of 2015 and our alumni had to say about what they had learned from their roommates during their time at Proctor: 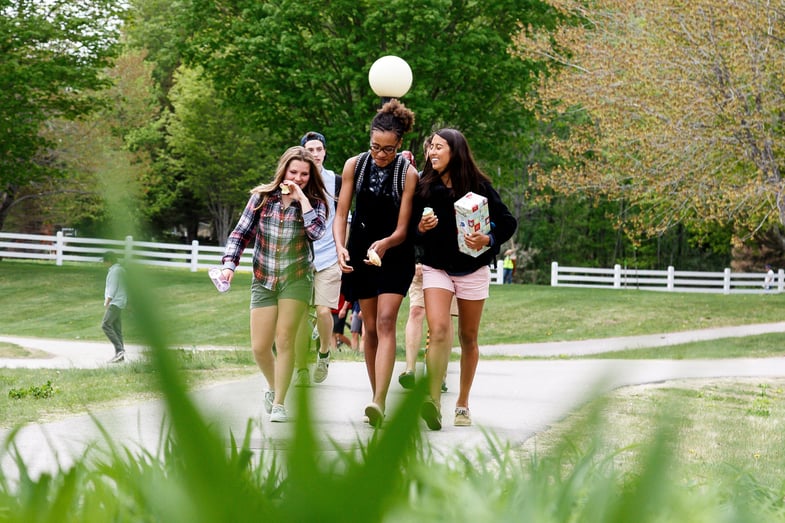 Carl ‘15 School Leader: By living with a roommate, your perspective on life grows. All those memorable late-night conversations like when you both ponder philosophical ideas and you go on and on, each line of dialogue revealing another piece of your identity that would have otherwise been shrouded without this unique interaction exclusive to living with a roommate. I believe my dorm is my family. It's my home away from home. The only relationship closest to that of a dorm would be my football team, but not all of us live together in one dorm. A good roommate accepts his roommate's interests, respects the space, and his roommate's schedule. And just being there to say "What's up?" when something is clearly bothering his roommate is definitely a good thing to do.

Alex  ‘15 Assistant School Leader: Having a roommate has taught me how to effectively communicate my needs and desires, something that I find most kids today struggle with. Being a good roommate means acting altruistically, considering the needs of others and lending a helping hand.  Living in a dorm is another way that Proctor becomes a tight knit community; the connections and bonds that formed in dorm life have become a huge part of my Proctor experience.

Lindsay ‘15: "I was absolutely terrified when I first entered my room my freshman year. I did not know where to start or what to do. But as soon as I started to hang pictures, pack away my clothes and put down my rungs, my new room felt as cosy as could be. When my roommate finally walked in I was amazed by how well Proctor matched us. As a freshman your roommate is your first friend, you walk to classes together, eat meals with each other, and of course do homework together. Some say that as years go on they start to drift away from their freshman roommate but I am still great friends with mine.

"Living in a dorm for four years now I would say that a good roommate is someone who is willing to share and compromise. Living in a dorm, your room becomes your new home, and the girls in it your new “family”. Being able to give and share ideas and space with your new roommate is key. Dorm life somehow bonds you with the girls in your dorm in such a way that even their friends do not share. It is something about the late night study sessions, the making of dorm snacks, and even the moments of sorrow that make the people in your dorm some of your best friends on campus. The memories that are created by living in dorms are something that you and your dorm mates will never forget."

Calvin ‘15: "Relationships forged in the dorm provide candid insight into one’s personality and ability compromise and work toward what is best for the group as opposed to what works best for one person. Dorm life exposes the emotional highs and lows of each individual and provides opportunities for others to offer support and guidance."

Some of our alums shared similar perspectives on the lasting impact of their roommate relationships on our Alumni Facebook page:

Ryan Bowse '93: One of my roomates and I used to purchase like 4 dozen white tube socks and put them in one drawer to use for the both of us. Some called us lazy but I really saw it as efficient and economical. Important point to know. This was when it was acceptable to wear white tube socks. Sadly we did wear them with dress shoes.

Heidi Cady Whitman '07: My first roommate at Proctor is still one of my very close friends to this day! Roommates make for long lasting friendships & opens you to a person who you might not have interacted with before living with another person!

Artie Pratt '54: I arrived at Proctor in the fall of 1954 for football camp & my assigned roommate in Cary House was Brevoort White. Let's just leave it at I have no memories of Brevoort. The next year, once again in Cary House, my roomie was Sumner Rulon-Miller. He was a new student & arrived early for football camp. I was captain of the 1955 team so we instantly became friends. A serious student & athlete I couldn't have asked for a better roomie. Our friendship would continue for fifty-five years until his untimely passing. He was a good & decent man.

Greg Samaha '71: Mine would set an alarm clock as far from his bed as possible, then set up waste baskets, desk chairs and other things that he would trip over and fall repeatedly in his attempt to get to it to shut it off. He thought it would help him to really wake up.

Curt Peterson '62: My first roommate at Proctor in 1959 was Bill White ('64). That's fifty-five years ago, for the math-challenged, and we are still very close friends. In fact, a large percentage of my closest friends are those I made while I was a student at Proctor, including three of the faculty who are still alive and to whom I am still very close. It's a great place to create and nurture wonderful, rewarding relationships.

So put those nightmares to rest and get excited about your roommate this year! You will be forced outside your comfort zone at times. You may be encouraged to be a bit more tidy (or messy). You may have to share your food and may have to wait for a shower to open in the morning, but you will form a bond with your roommate that will be special and will last a lifetime!