Every commencement has a speaker, and most commencement speakers share a similar message of encouragement to graduates as they enter the 'real world'. Proctor's 168th Commencement welcomed Pudu '16's mother, Leymah Gbowee, to campus not only to watch her daughter graduate, but to share powerful words with the Class of 2016. Her message was less one of encouragement and more one of a directive to the graduating class, and we thank her for the impact she left on all of us.

As a 2011 Nobel Peace Prize recipient, Ms. Gbowee's resume (which also includes the 2010 John Jay Medal of Justice, the 2009 Gruber Prize for Women's Rights, the 2009 John F. Kennedy Profile in Courage Award, and the 2008 Women's eNews Leaders for the 21st Century Award) more than qualified her to be Proctor's commencement speaker. It was not her resume, however, that impressed those in attendance, but rather her impassioned plea, as a mother of a graduate and a witness to injustice around the world, that left an indelible mark on those in attendance. Watch her address below.

As Ms. Gbowee recounted her own life experiences helping negotiate violence in a bloody civil war in Liberia and bearing witness to both the worst and best of humanity, she asked the Class of 2016 to follow four simple rules as they matriculate into the University of Life:

"If you have been to where I have been and seen the things I have seen, a little kindness in the world gives a glimmer of hope to many people...One of things you must cultivate to change the world is a heart of kindness." 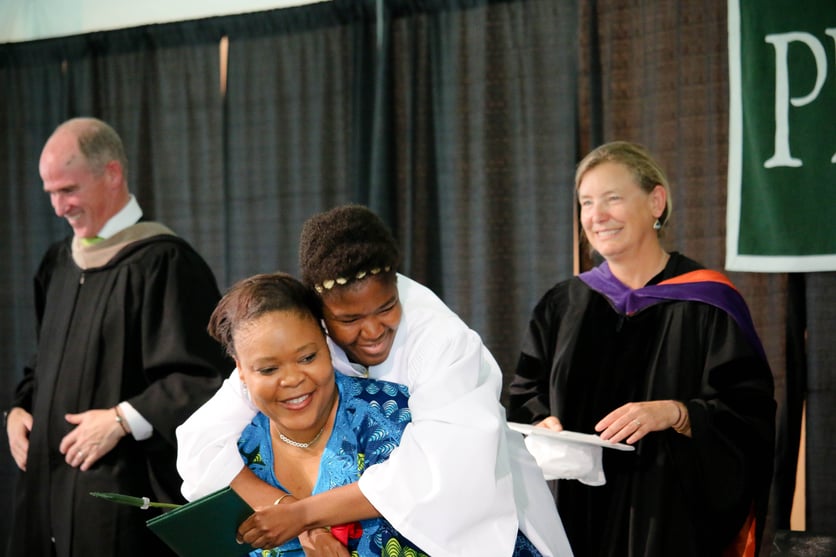 "You cannot just give hope through your enthusiasm. You must act. You've been in this sheltered world at Proctor, everything is a bubble, as you step out, you are going into the University of Life. You have to figure things out for yourself, and whatever you decide will be your profession in life, embrace it with boldness. Determine you are going to be who you are regardless of what the world thinks."

"Whatever you choose to do in life, do it to the best of your ability. Leave an impact. Do not go through this marketsquare of life without someone turning around saying, 'She passed here'. Leave a lasting impact because the world needs it. Our world today is crying out for young men and women, and older folks, who are willing to step out and do great things. Whether you are six or forty, you carry unique gifts that can change the world."

"Leaving large footprints entails not walking on your tiptoes. People who walk on their tiptoes, never leave an impact. Walk boldly, be kind, and leave an impact wherever you go."