Honoring 96 Years of Service: Thank You Marie, Lida, and Ed!

Each year the Proctor community evolves as students graduate and faculty and staff move on to retirement or new careers. At the end of June, three long-time members of the Proctor community will enter a well-deserved retirement. Marie Montivirdi, Lida Beaudoin, Ed Barkowski represent a combined 96 years of institutional memory and incredible service to the school. They have impacted thousands of lives during their careers, and today we celebrate their immense contributions to the Proctor community!

Marie began her career at Proctor in 1983 when she joined the community as a librarian with a recent Master’s in Library Science from the University of Rhode Island. Over the next 34 years, Marie helped evolve Proctor’s library services during a time of incredible technological development. She would see her three children (Krysta ‘93, Mike ‘97, and Anthony ‘05) graduate from Proctor as she dedicated her entire career to the development of a dynamic, agile library able to serve Proctor’s students and faculty. Marie helped Proctor’s Lovejoy Library evolve into a center for learning on campus when it moved from Shirley Hall to the Fowler Learning Center in 1995, and confidently shared her knowledge of print and online resources with countless students over the years. She has proofread and checked citations on an estimated 2,000 U.S. History research papers during her career.

Marie’s impact on Proctor extended well beyond the walls of the Lovejoy Library, however. She regularly helped plan and execute Proctor’s Martin Luther King, Jr. Day celebration and meticulously recorded minutes at every faculty meeting over the past three decades. Long-time partner in the Lovejoy Library, Judy Preston, shared the following reflections on Marie’s impact on Proctor, “Marie’s legacy at Proctor Academy is embodied in the now 22 year-old Lovejoy Library on the main floor of Fowler Learning Center. Under her stewardship, the library went from being that quiet double classroom in Shirley Hall to this two level, light-filled, post and beam structure inspired by Shaker architecture that continues to astound visitors and meet the changing needs of the Proctor community. Thank you, Marie, for your decades of dedication to librarianship and to the Proctor community."

Lida joined the Proctor dining services team in 1985 before eventually moving to manage the bookstore in 1988. Throughout her entire career, Lida’s impact on the Proctor community transcended her ‘title’, as she developed remarkable relationships with the student body through her work. In 1991, Lida was given the opportunity to assistant coach the varsity field hockey team after her skills were noticed by Patty Pond in a faculty/student field hockey game the year before. (Perhaps now you know the answer to the trivia question: Who was the Salem High School Female Athlete of the Year in 1968?). 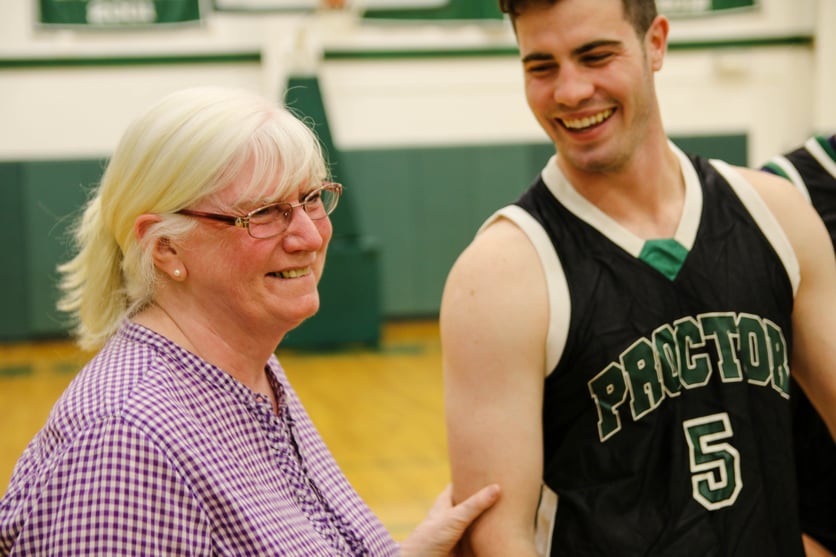 Through her varying roles as book store manager, field hockey coach, Proctor parent (James ‘96), and ardent supporter of Proctor athletics, Lida made an enormous impact on the Proctor community during her career.  She rarely missed a home basketball game, and the echos of Lida screaming “REBOUND!” from her front row seat on the bleachers will be dearly missed by basketball teams next year. Boys’ basketball coach Gregor Makechnie ‘90 adds, “Lida remained as committed to her basketball players off the court as she did on it. She welcomed them warmly in the school bookstore, offering words of encouragement in the days leading up to games and congratulations or comfort (and occasionally some pointed suggestions) following games. After graduation, she continued to track players because, of course, she cared about a lot more than basketball. Proctor Basketball wishes Lida well as she retires.  She will remain Number 1 in our hearts.”

Lida’s colleague in the bookstore, Alex Estin ‘83 notes, “Lida has touched so many people in her time at Proctor. She would do anything for any student, and for some of her special ones she would bake goodies.  She has touched the heart of so many students in her time here, and will be so missed!” 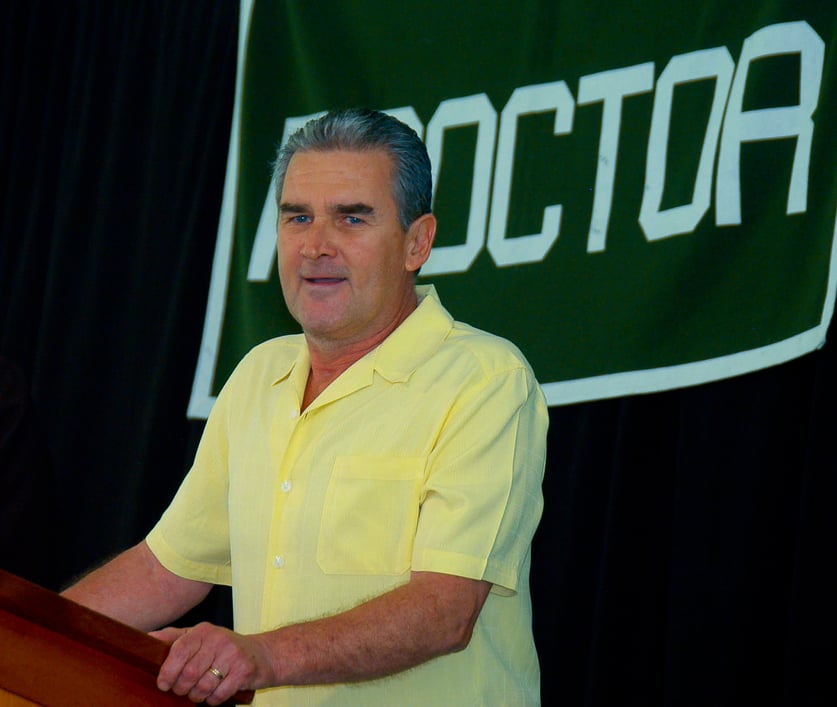 Since 1987, Ed has been an integral part of the Proctor community, first joining Art Makechnie’s kitchen staff as a cook before shifting to manage the Wise Center in 2005. Through the relationships he built with students both in the kitchen and in the Wise Center, Ed worked to teach incredibly valuable life lessons centered on hard work, responsibility, and integrity to countless Proctor students over the years. We often say there are no walls to classrooms at Proctor, and Ed epitomized this by viewing his role managing the Wise Center as much about educating students as it was about making the facility run smoothly.  Dean of Faculty Karl Methven reflects, “Ed is an incredibly caring person who understood the value of teaching young people how to work hard while remaining patient with their ‘not yet development’.” 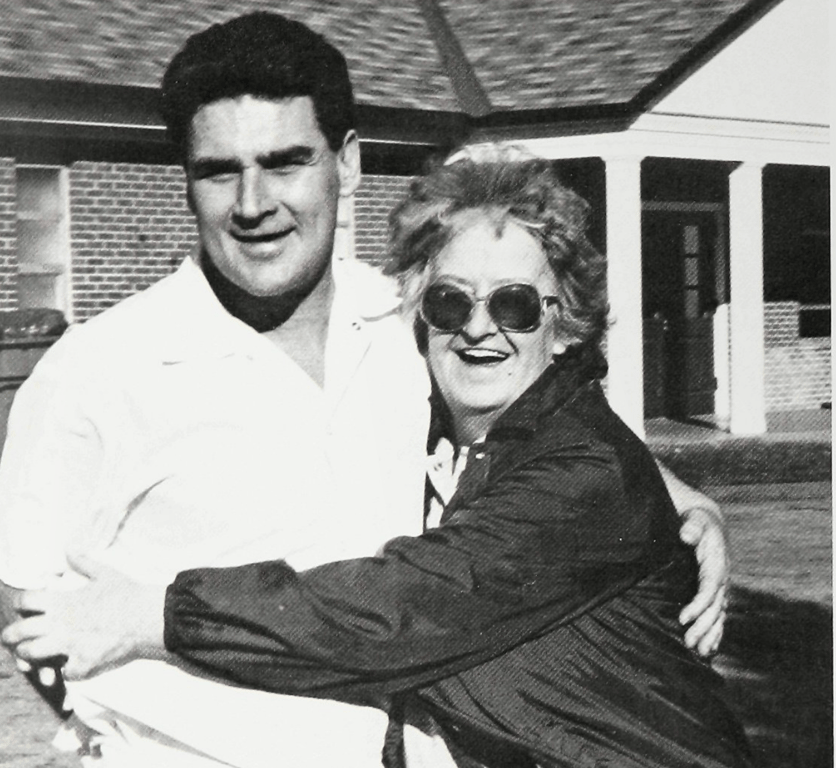 Ed’s two children (Ed ‘99 and Christine ‘01) graduated from Proctor, and his commitment to this place over the past 30 years has been remarkable. Student Life Coordinator Lisa Scarry notes, “He showered the students with tough love and they respected and loved him for that. He was a mentor,  strong role model and teacher for all the students and lived by our core values every day. Assistant Head of School Karin Clough adds, “You don't want to be on Ed's bad side. Nobody wants to disappoint Ed, and yet, he is warm, funny, kind, and incredibly compassionate---but don't forget to be on time, work hard, wipe all the corners, and have integrity in every interaction and action each and every day!”

Please leave a comment below with your favorite memories of Marie, Lida, and Ed so we can share with them!