As our group has experienced these past few days, things don’t always go as planned. This past week we have experienced lots of mechanical issues with both our bus, Deb, and our trailer, Rocinante. Deb has taught us to be flexible with plans and make these times fun for ourselves. 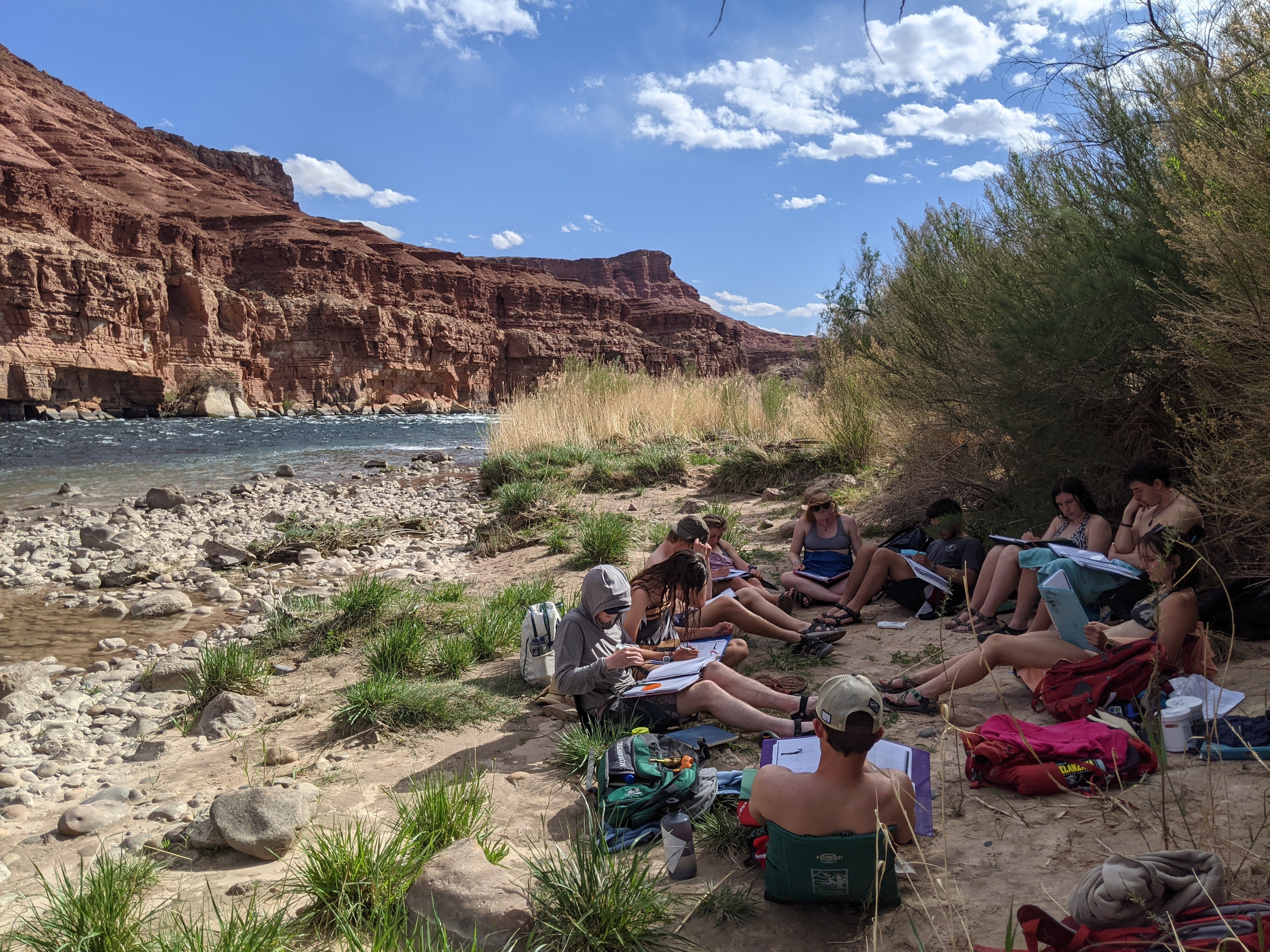 When we found out that Deb was going to have to spend an extra night in the desert, Erica and Quinn set out in search of a way to get all twelve of us out of the desert before dark. After seven hours in the desert, we were saved by some nice sheriffs with sick pickup trucks. Park ranger, Royce and Sheriff Bryan told us all about their duties in the outback, including herding cattle and how they cover 2.4 million acres of patrol. That night, Erica surprised us with PIZZA and then we all fell fast asleep. The next day, we slept in to give Quinn and Erica time to figure out our vehicle situation. We took our second showers of the trip, did laundry, and Camden and I took some picnic table naps. Camille opened up shop for the group to do watercolor painting and henna, a temporary tattoo, art. Going to a park for lunch with sandwiches, we met a seven year old boy there named Newt, who informed us that he would be herding 300 head of cattle that afternoon. We stayed across the street from The Grand Staircase Escalante Partners and were able to walk over and meet Neak, an anthropologist, who let me hold their dog, while they taught us a historical lesson on the colonization of the West. 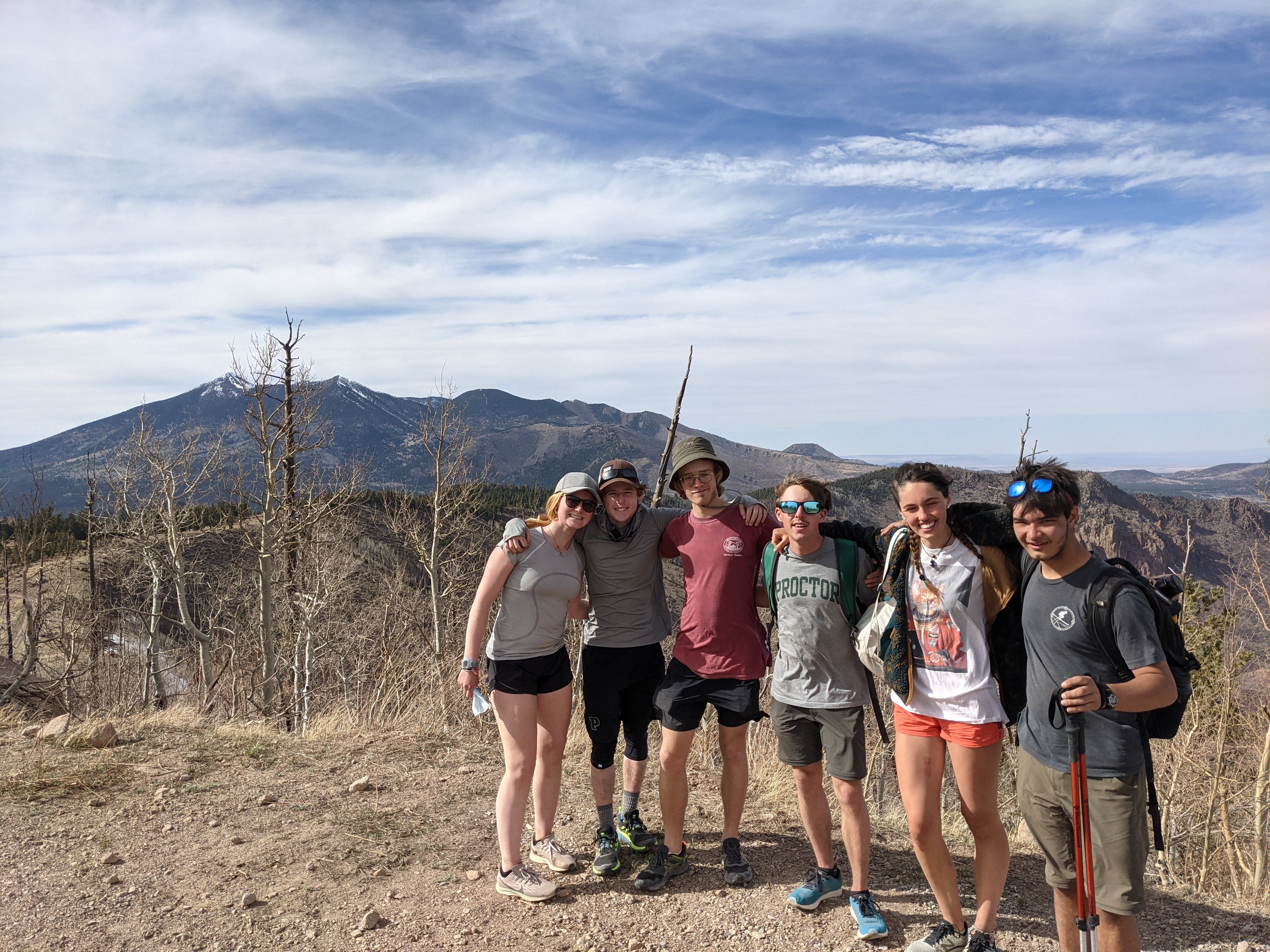 Before we knew it, Deb was back and ready to hit the road again, only delaying plans by a day or two. We headed out from Escalante, Utah, to Kanab, Utah stopping for burgers on the way. Annie and I opted for veggie burgers and we all chowed down, minus Cam who specially ordered no cheese on her burger because of her dairy allergy, but was given it anyway. In the end, she was psyched to get two Nature Valley bars. We pulled into the camping grounds at dark and hit a bump. Little did we know our trailer had just popped off. With a couple loud bangs of the ball hitting the ground, we became well aware. Luckily, with the help of some nearby campers, we were able to remove the bumper and reattach the trailer using the backup ball hitch. 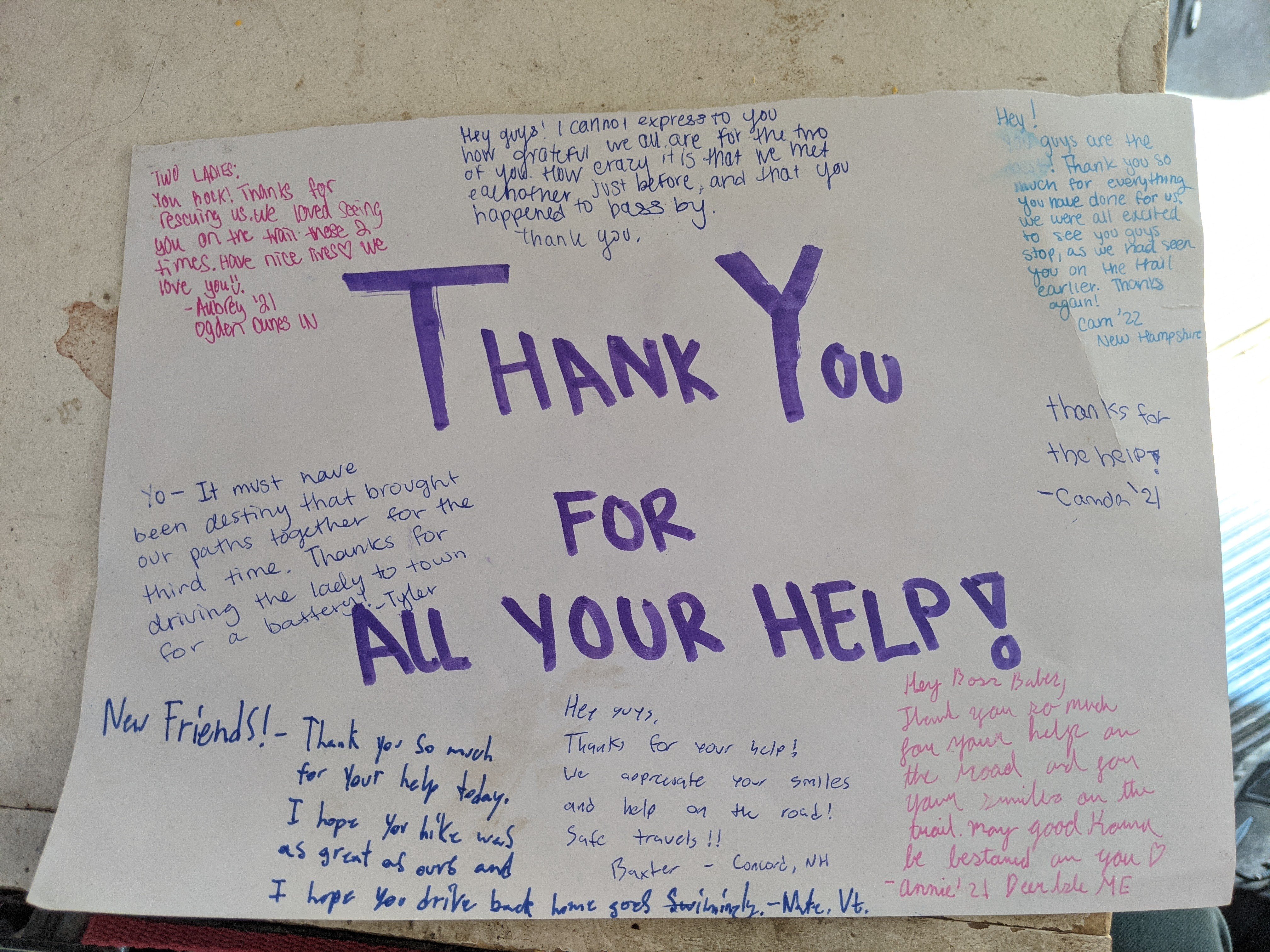 Taylor Swift gets us to Flagstaff

With Taylor’s recent release of her new album, we spent the entirety of our drive listening to all the throwbacks, Love Story and You Belong With Me, which Quinn knows all the words to. We went grocery shopping and everyone stayed under their budget. Annie and I pride ourselves on always providing for the group by offering an array of topping for pita pizzas, a group favorite. Over the course of the next few days we went sightseeing. We were able to go to the Grand Canyon and even hiked down a bit for a better view. We spent time in the Canyon and even spent class painting our unbelievable view. Some paintings were more abstract than others, but the process of waiting was such a calming experience. We then made our way to Horseshoe Bend and took some insane pictures, before getting caught in a windy sand storm. Even Loper, our group mascot, got in on the action. Throughout the past few days our group has developed an addiction to talking in a British accent. The best would have to be Nate, who can fluently ramble on about the view and such, and things, and whatnot, as he would say. 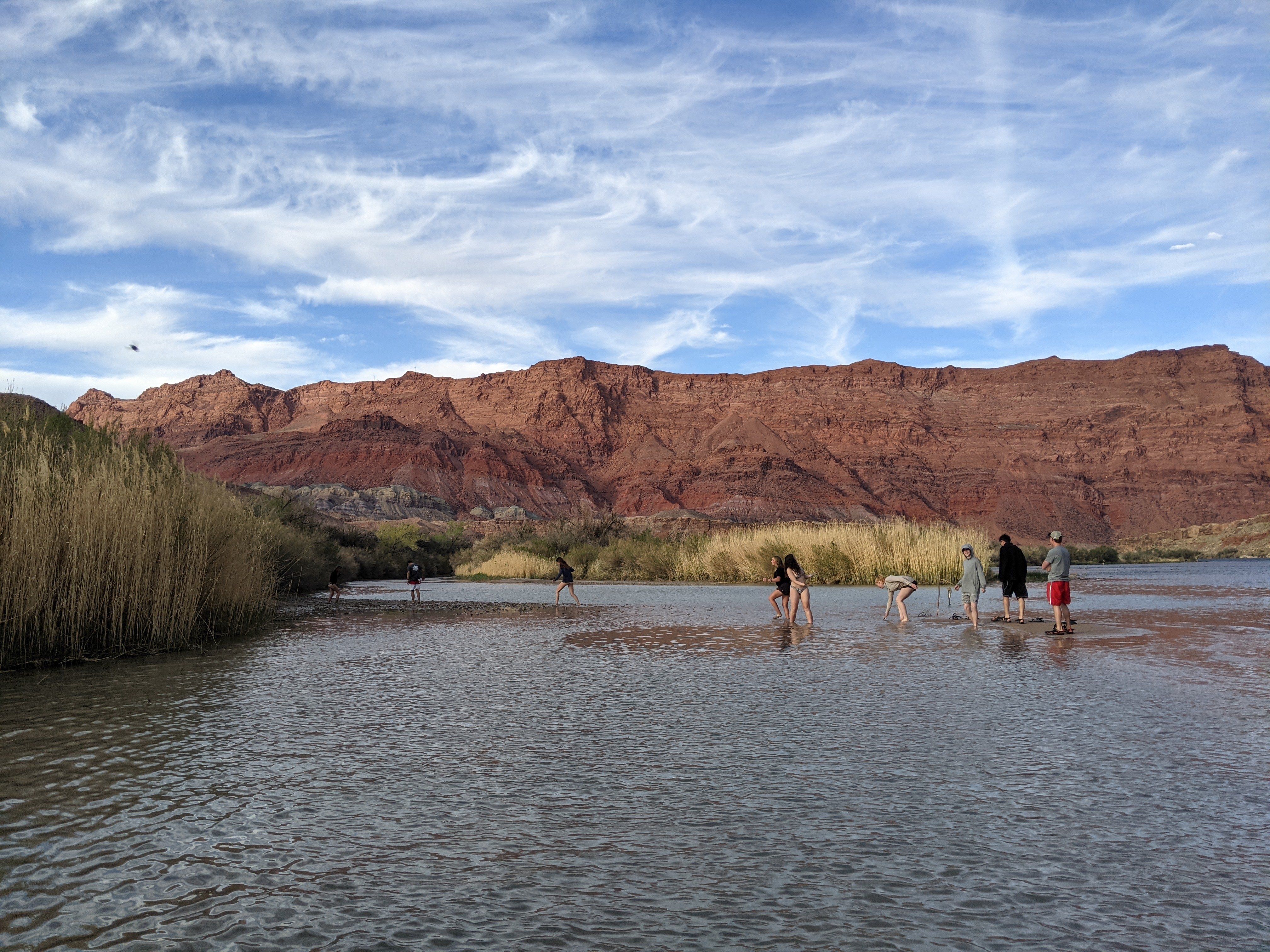 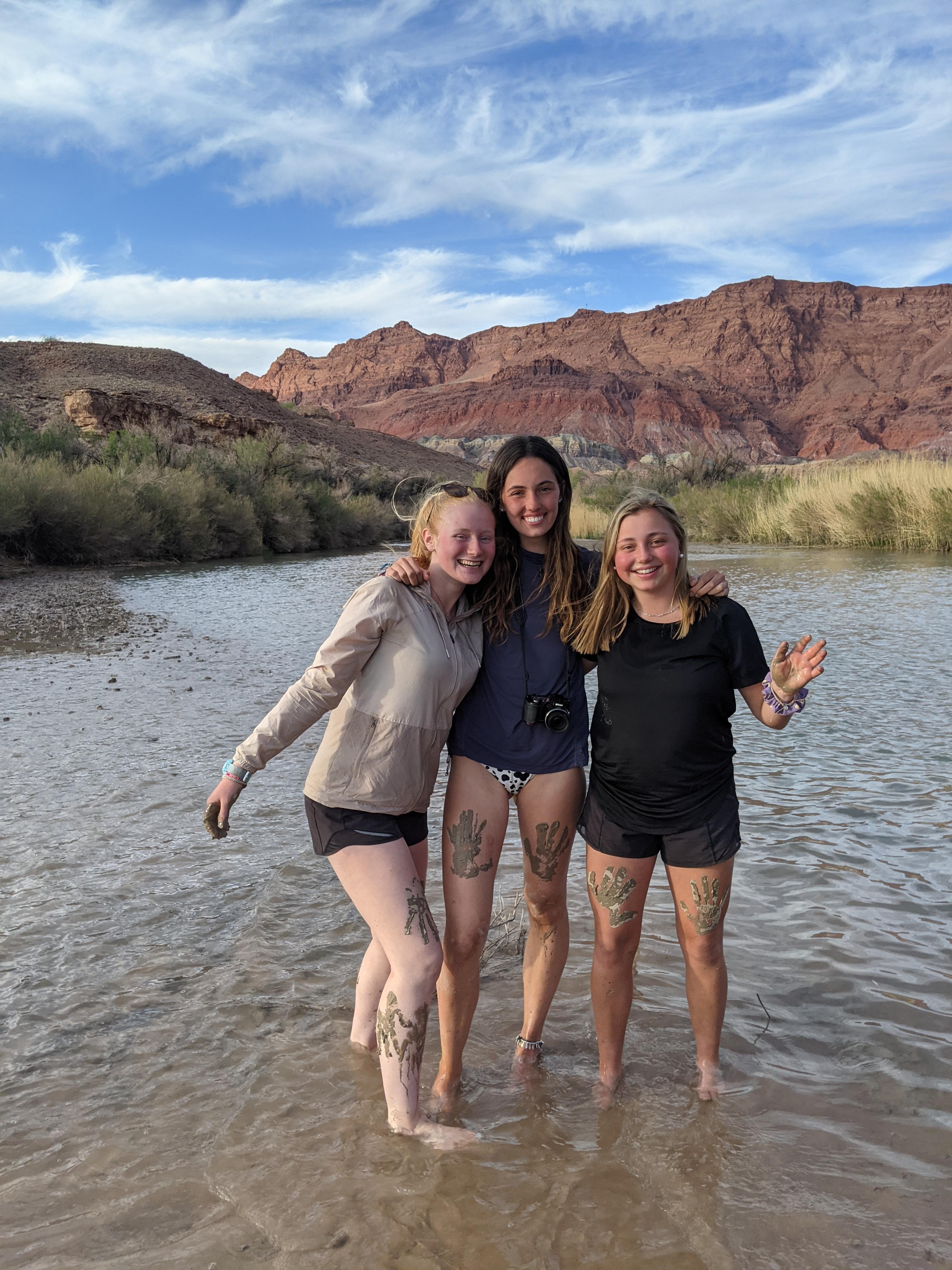 One of our favorite classes by far was spent at the Colorado River sampling the water's oxygen and bacteria levels, and comparing them to the Paria River. We also looked into fish species, specifically the ones that became endangered when The Glen Canyon Dam was built. In between sections of the lesson, Erica let us jump into the water to cool off. We found a super muddy area next to the sand flats and used the mud to give each other facials and walked around getting soft feet! 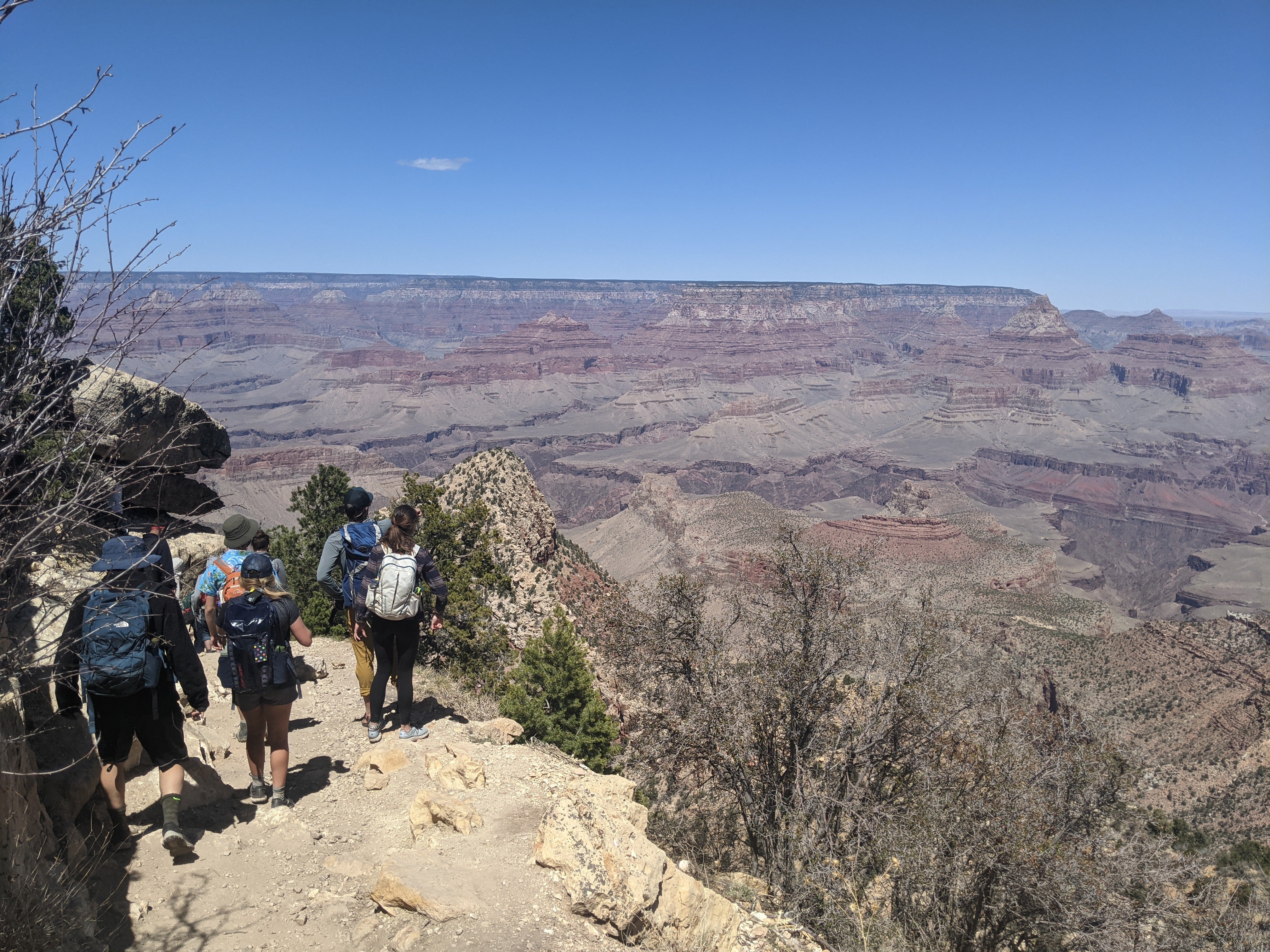 Recently we have been entertaining ourselves by watching each other trip over the invisible outriders of our tents and rocking back in our crazy creeks to avoid the fires flames. The best part of our days would have to be an evening meeting where we wind down by ringing the bell, reviewing what went well that day and what we could have done better, doing Q and A’s, then talking about the next day's schedule. We finish off with a second ring of the bell to close our circles discussion. We settle into our sleeping bags each night, but for those of us who roll in their sleep, it hurts waking up off our sleeping pads and on the rocky ground beneath us.

Today was our final day in Flagstaff and is a beautiful place that the group was not ready to leave. We ran some errands like dropping our broken bumper at a junkyard, refilling allergy meds, and filling the bus with gas. The gas part was my job today since I’m the “gear guru” but I stood there for quite some time before Erica showed me that the gas wasn’t pumping yet, and I had just been waiting for nothing. Now, I can pump gas with my eyes closed. We also returned to the grocery store to do some food shopping for our next backpacking trip. We re-scrambled the cooking partners and now Aubrey and I were determined to have the best meal day, but right after checkout we had an accident. Not really sure how, but our blueberries fell out of the cart, and went everywhere in the entrance of the grocery store. With some help from a couple cute guys in the store, we picked them all up super fast, but were bummed to throw them away. When we went into the store for personal purchases, many of us fueled our love for Kombucha and cheered in the bus on our way back to Utah for more adventures!