Proctor’s experiential roots run deep. While many of our alumni stories focus on the current careers of alumni within the past thirty years, recently, Dick Day, Jr. ‘42 responded to an alumni newsletter with his story. It is not often we are able to share a student’s journey through Proctor from this era, so we jumped on the opportunity.

Dick Day, Jr. arrived at Proctor as a ninth grader in 1938, and during his three years at Proctor his life was transformed by his experience. He notes, “This year I turn 92 years old, and looking back on my life I now realize what a profound impact Proctor had on me and my development.”

Proctor was a different school in many ways during that time period, but the relationships Day had with his teachers ran just as deep as the relationships between students and faculty today. “Men like J.H. Gulick and Mrs. Gulick made me feel at home at Proctor.” Day’s Proctor experience was not all positive, however, as he had a few teachers who did not have patience for his learning style (This was before Proctor realized the role teachers could play in helping students work through their learning differences and became the first school to offer a formal academic support program in the mid-1940s). Day left Proctor after his junior year and returned to his hometown to graduate alongside his classmates from his elementary school, but remains incredibly thankful for his time at Proctor. “My life at Proctor taught me to think for myself and to never hesitate to challenge someone when an obvious explanation just doesn’t quite seem right.” 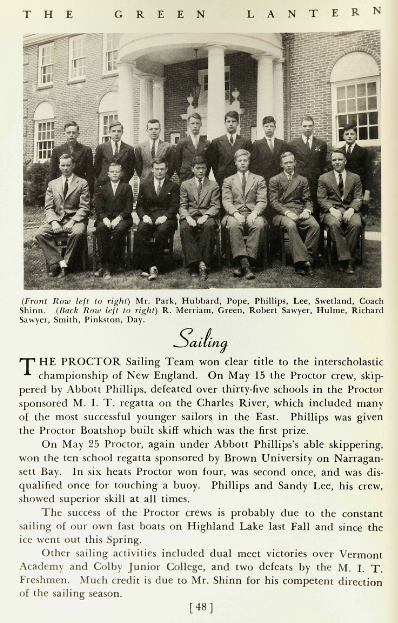 Outside of the classroom, Day was a member of Proctor’s sailing team that traveled to regattas on the Charles River and Narragansett Bay sponsored by Brown University. He not only raced for Proctor, but he helped build the boats he raced, “Cap Rounds in the boat shop was a great chap to work with and he showed us how to plane the boat strips like a professional. I finished two boats in the three years I was there. My father bought one of the boats for our family to use, but over the years we have lost track of it.”

Day’s positive memories of Proctor extended to the Cary House dining hall as well. He was thrilled to find out the quality of food prepared by Proctor’s talented dining services team remains the envy of the Lakes Region. Day recalls, “The food at Proctor was very good! My mother was a painter and we never had a meal on time! After her cooking, going back to Proctor was a relief. I know it sounds bad, but she loved her works and we enjoy them now.”

While at Proctor, Day had also gained an interest in amateur radio. He had a 5 meter amateaur radio receiver (see image below) setup on campus. “I wasn’t able to put my antenna on top of Mary Lowell Stone as I was told it would compromise insurance with increased likelihood of lightning strikes, but I made the antenna in the boat shop and it became a passion of mine.”

The late 1930s and 1940s were a tumultuous time for Proctor and for its graduates. Coming out of the Great Depression, Proctor’s student population was under 100, and as an all-boys school, many of its alums entered the armed services during World War II. Day was no different and in the Fall of 1942 signed up to join the Army Signal Corps as a radio mechanic. After training, he was deployed to Italy in the Fall of 1943 where he joined a Texas based outfit which provided wire and cable telephone, teletype, and mobile radio services for the US Second Corps as well as helped repair mine detectors that were a crucial tool during the war.

While U.S. troops were deployed around the world, Day recalls the connections Proctor alumni shared in the armed services, “Many of us of the classes of 38-42 wound up in the service and on occasion ran into other Proctor grads in faraway places. One day, I got a telephone call from Robert Merriam ‘41, W1NTE while sitting in a foxhole buried in snow at Passa De Futa, Italy in the winter of 1944-45.  He was a very resourceful technician who wired up this connection from Liege, Belgium through France up to Florence, Italy to the top of the Italian Alps at Futa Pass (image below of our regiment at Futa Pass in 1945).  I think he had wired better service than the generals got while we mere troops trying to survive in the snow!”

Day’s service continued in Europe until 1945 when he shipped out and eventually found himself in Japan touring Hiroshima following the atomic bomb. After being discharged on Dec 7, 1945, he returned home to Peterborough, New Hampshire and enrolled at the University of New Hampshire, but eventually had to stop school to support his wife and newborn baby. He passed his RCAC exam and spent the next 7 years working out of London traveling Europe sorting out communications problems related to record communications and helping create systems to translate proposed contracts, weather reports, and flight plans. “I spent the best part of my working life traveling the globe trouble shooting all sorts of communications problems, and have been in at least 60 countries including the high arctic. It has been an adventure.” 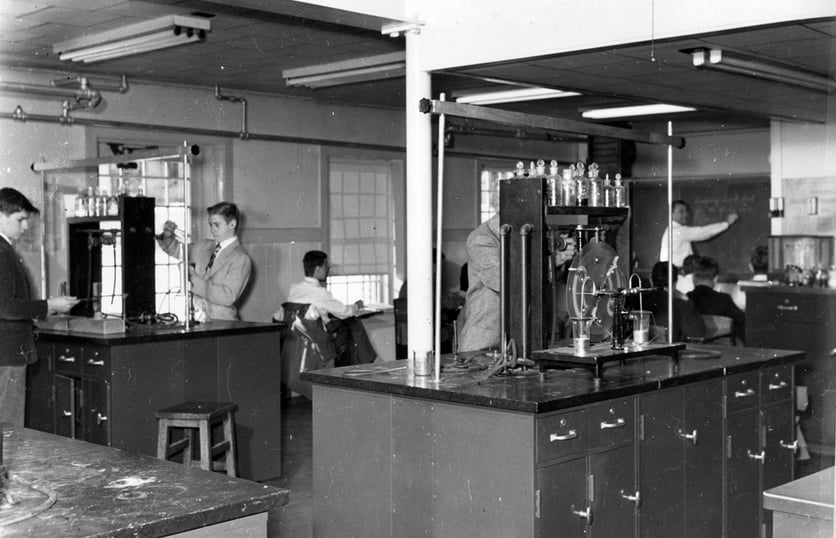 Dick Day, Jr.’s life has been an adventure, one that started at Proctor long ago, “I just wanted to say a few words from those now long gone what a great school Proctor is, and while my path hasn’t crossed with those teachers there today, I am sure your years at Proctor will have students 50 years from now saying, ‘Thanks for leading me down the road of life in a meaningful way.’”