Three years ago, Proctor art curator Molly Leith connected with renowned sound artist, Spencer Topel, about designing an installation for the atrium of the Fowler Learning Center. Originally planned as a student collaboration during Project Period 2019 last March, the complexity of the project postponed the installation until the first week of December. After a week of ropes, rigging, and detailed construction alongside Brad Hardie of Fireside Design Works, Time Lines now graces the Fowler Learning Center.

Spencer Topel is an American artist combining sound, installation, and performance. His practice is often characterized as an exploration between sculpture and musical instruments, expressed in a variety of works ranging from site-specific installations to performance art pieces. At the heart of this inquiry is the notion that objects have their own unique voice, and the task of the artist is to reveal and amplify this quality. Educated in music composition at The Juilliard School and Cornell University, Topel later joined the faculty at Dartmouth College as a professor of music. There he collaborated with sculptor Soo Sunny Park on several projects including Capturing Resonance for the DeCordova Museum and Sculpture Park. 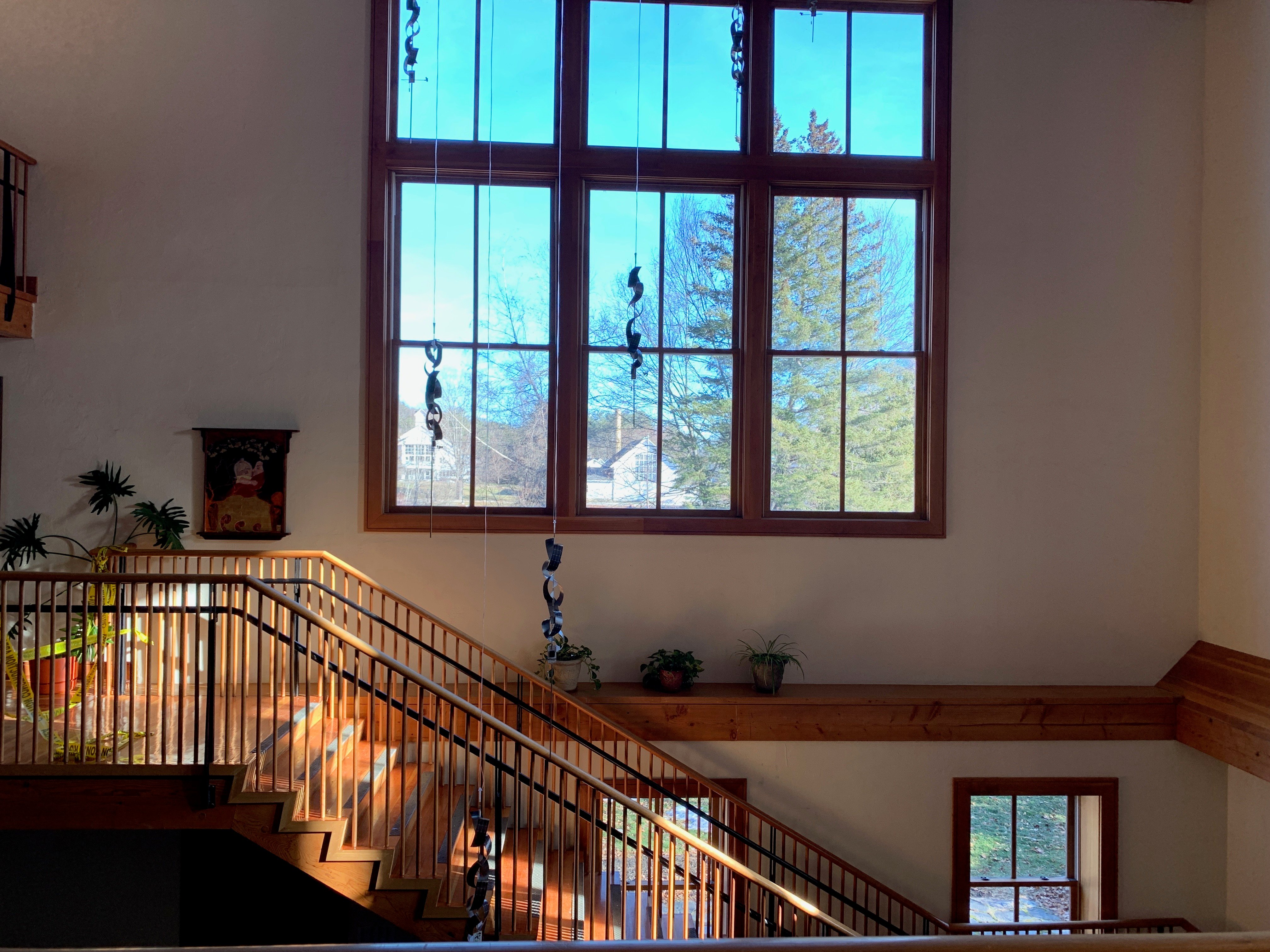 Collaboration is a central part of Topel’s practice, which led to the formation of two companies: STUDIO TOPEL and Physical Synthesis Inc. in 2019. Most recently, Topel was Artist-in-Residence at The Yale Quantum Institute, where he and his collaborators developed the first-ever musical synthesizer using transmon qubits, the building blocks of quantum computers.

The installation of Time Lines was a true collaboration as Topel, Molly and Corby Leith '92, and Fireside Design Works partnered to plan and install this complex sound art exhibit.

Time Lines attempts to create a sonic and visual experience reminiscent of summer as so much of New England is silent throughout the year, especially during the coldest months when the buildings themselves become fortresses against the cold. I also want to preserve and reinforce our connection to nature, specifically to light and sound. To this aim I developed a sculptural automaton called a “Sun Chime”.

Reminiscent of wind chimes, sun chimes are powered using simple yet clever circuits that harvest energy from indoor solar panels in low-light conditions. When specific power thresholds are reached, they discharge energy into motors, causing the sculptures to spin. These behaviors cause the striking of metal chimes resulting in soft, audible tones, as well as generate a visible motion along luminescent lines connected to the canopy above.

Twenty-one handcrafted sun chimes, each with a unique tone, are installed together in such a way as to generate a curving trajectory, spatializing sound throughout the atrium, and together with the choreography of the winding, luminescent lines creates a unified expression of kinetic solar energy.

Time Lines will be installed through 2021 in the Fowler LearningCenter. Be sure to stop by and see this beautiful sound art installation for yourself!