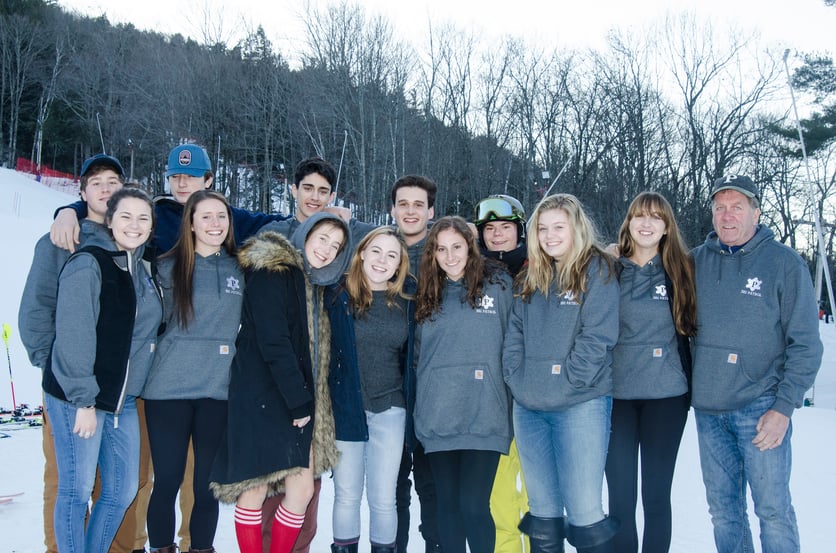 Proctor’s Ski Patrol team consists of a group of students and their dedicated coach, Larry Ballin. They commence the winter season with significant first aid training and ski patrol basics in order to prepare for the events that will take place at the Proctor Ski Area during the coming months. Ballin notes, “All student patrollers are Wilderness First Aid certified by SOLO - a great stepping stone into wilderness emergency care. This was a three-day course held earlier in the term. All students in the program either have been or will be CPR and AED trained and certified. We have also practiced skiing with patient transport sleds, and we spend time discussing and practicing various possible injury scenarios that we may come across at the ski area.”

While students take their job seriously at all times, pressure is applied to the team extra when a racing event is taking place. In the event of a medical crisis, they are the first response. Along with the responsibility as medical trainees, they have to make sure the machines that carry the skiers up the hill function and work properly without causing injury to those using it. Senior Madison Clarke has devoted her winters to Proctor’s ski patrol team for the past three years. She notes, “We are in charge of watching the hand tow, and assisting with injuries that happen during both Nordic and alpine races. Ski patrol is great for those who are interested in learning first aid, who love the outdoors and skiing, and who want to help others through community service.”

While ski patrol may seem like all work and no play, Ballin assures us students get plenty of time on the snow. “We ski. A lot! Patrollers are available to help anywhere around the Proctor Ski Area, but we also try to travel to other ski areas to both ski and learn from their patrollers. We have trained with the patrol at Ragged Mountain in the past, and we hope to ski at Cannon Mountain later this month. Through these opportunities, we are able to gain more knowledge about safety and medical training from other professional patrollers. It is a great opportunity for our Proctor students to gain valuable skills that will transcend their Proctor experience.”

The video below if from a few years ago, but gives a great sense of what the program is all about!

Not only does the team train for medical emergencies and working during races, they have a great time together as a group enjoying the great outdoors and what they do best, skiing. “During my three years on ski patrol I have met some of my greatest of friends, and have interacted with so many wonderful people in the ski world, both from Proctor and all the other schools that train and race here.  We always have a great time whether we're on the hill or eating Larry's delicious cookies!” Like other sports teams, Proctor’s Ski Patrol team is able to take their job seriously and have fun at the same time!