Proctor Academy's history is far from glamorous, however, it is filled with stories of individuals whose creativity, determination, and commitment to Proctor's mission helped shape the school into what it is today. As we celebrate Women in History Month during March, we wanted to highlight a few of the many women who were influential in Proctor's evolution as well as celebrate the young women who are making the most of their Proctor experience today!

The documented history provided by former faculty member and Director of Communications Chuck Will served as a basis for much of the content in this post, and we encourage you to visit the links at the bottom of this post to learn more about Proctor's history! 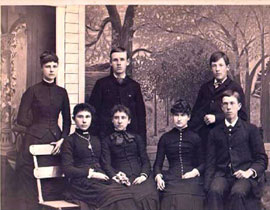 In 1848 Eliza Butterfield proposed the Town of Andover should provide a school for its children and convinced her husband, Samuel Butterfield, who served on the Governor’s Council to move forward with plans to open a school in town. Governor Jared Williams declared the corporation of Andover Academy on June 23, 1848, and the school would open in September 1848 with 108 students, but would change names numerous times over the next thirty years until 1880 when John Proctor helped reopen the school under the name Proctor Academy.

One of three students in the first official class at Proctor Academy in 1880, Luella Scales (above center with glasses on) would go on to become the first female Head of School/Principal in Proctor’s history in 1892 and would attend Darmouth College summer sessions with Clara May Currier (see below) in the early 1900s. Today, the Luella Scales Award is given at graduation each year to the student who has demonstrated excellence in mathematics. 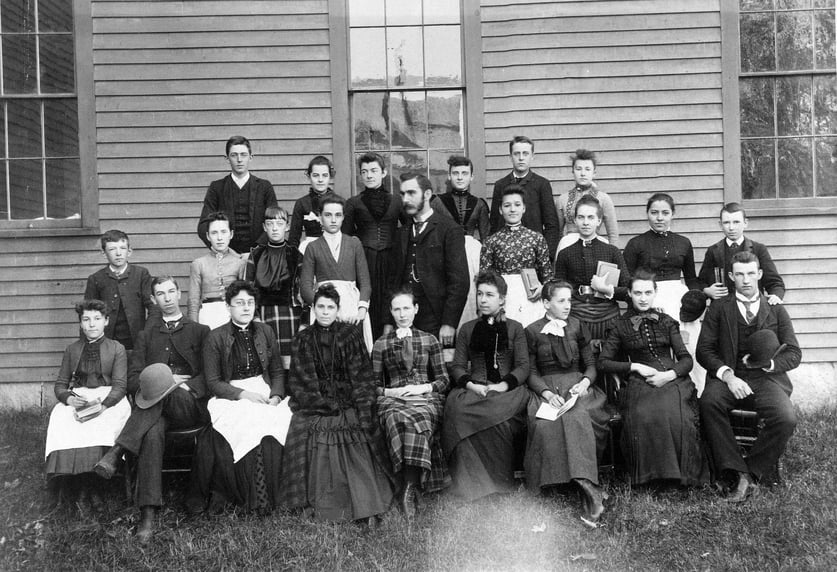 In 1902 Clara May Currier arrived at the Andover train station as a young widow with two young daughters in tow. Currier would go on to teach English, Latin, and Greek for 27 years at Proctor, and became an outspoken defender of women’s rights, speaking around New England in support of women’s suffrage and working to combat juvenile delinqency. She began her career teaching at the age of 14 in Massachusetts and previously served as principal at the Canterbury Keazer Seminary. Currier taught at Proctor until 1930 and was a graduate of the NH Literary Institute and attended summer sessions at Dartmouth College for three years.

Mildred Howard arrived at Proctor in 1924 and knocked on the door to the main school building notifying the school she knew how to type. For the next 50 years (yes, 50!), Mrs. Howard served Proctor as the assistant to five headmasters and as the school bursar (now the business manager). When Mrs. Howard retired in 1973, Proctor hired three people to replace her. Her impact on Proctor was immeasurable as evidenced by the number of yearbooks dedicated to her!

Mrs. Dorothy Guilick arrived at Proctor with her husband, John Halsey Guilick, in 1935 when he accepted the Head of School position. At the time, Proctor was in economic despair in the height of the depression, but together the Gulick's worked during their 17 year tenure to make Proctor feel like home to those boys who attended. At the age of 92, Dick Day, Jr. '42 reflected, "It was through the kindness of Mrs. Gulick that Proctor felt like home."

Mrs. Connie Burbank (above serving lunch at a ski race) arrived at Proctor as a newly wed with her husband in 1935. At the opening of the year chapel service, Head of School Carl Wetherell announced he was quitting effective immediately as financial struggle surrounded the school. Connie's husband, Ro Burbank, stepped into a leadership role as a 22 year old just out of Dartmouth, and it was in part through Connie's support of Ro, and their collective dedication to service and innovation in the community, that Proctor rebounded from bankruptcy. Student service programs integrated seamlessly into the community as skills courses were born and Proctor began to flourish in the 1940s and 1950s.

Marion Hatt arrived at Proctor in 1950 with her husband, Roy, who served as Proctor’s chaplain. Mrs. Hatt became one of Proctor’s first remedial reading specialists in the predecessor to Proctor’s Learning Skills program. Her work with students like Sumner Rulon-Miller ‘57 transformed lives and led Proctor to further develop formal academic support programs for students with dyslexia. Hatt’s impact was so great on students like Rulon-Miller, that the Marion Hatt Scholarship was established in her memory. Each year, a Marion Hatt Scholar is selected by a board of all past recipients.

Alice Fowler arrived at Proctor in 1964 with her husband, David, and young daughters. While serving as dorm parent and eventually as a Learning Specialist to hundreds of students in Proctor’s Learning Skills Department, Alice epitomized the kindness, compassion, and steadfast faith in students being able to achieve their absolute best. Her work alongside John Schoeller and many others helped shape Proctor's Learning Skills program into the national standard for integrated academic support. For many students and faculty, Alice's spirit represents the best of the Proctor community.

We know this list of impactful women in Proctor's history is incomplete, as there are dozens more women who have shaped Proctor over the past thirty years. It is impossible to recognize all those who have left a lasting legacy on our school and every member of the community leaves her unique impact on Proctor whether here for one year or for thirty years. Since the 1970s and early 1980s, a time when Proctor re-imagined itself, more than 50% of faculty and staff have been women. Through their service as Wilderness Orientation leaders, teachers, coaches, dorm parents, department heads, administrators, and staff members, they have continued to lead Proctor forward in their respective roles. We honor their collective impact on Proctor during Women's History Month!