Most educators enter the field soon after college or graduate school. They cut their teeth as young teachers, learning to manage classrooms, teams, and dorms, to gain expertise through experience as only teaching can provide. Rarely does a teacher decide to enter the profession at the age of 62. Even less often (perhaps never?), does the former Chair of the Board of Trustees decide he wants to start a new career teaching and coaching at the age of 62, but such was John Pendleton’s approach to life: always learning, always growing, always seeking to make an impact. 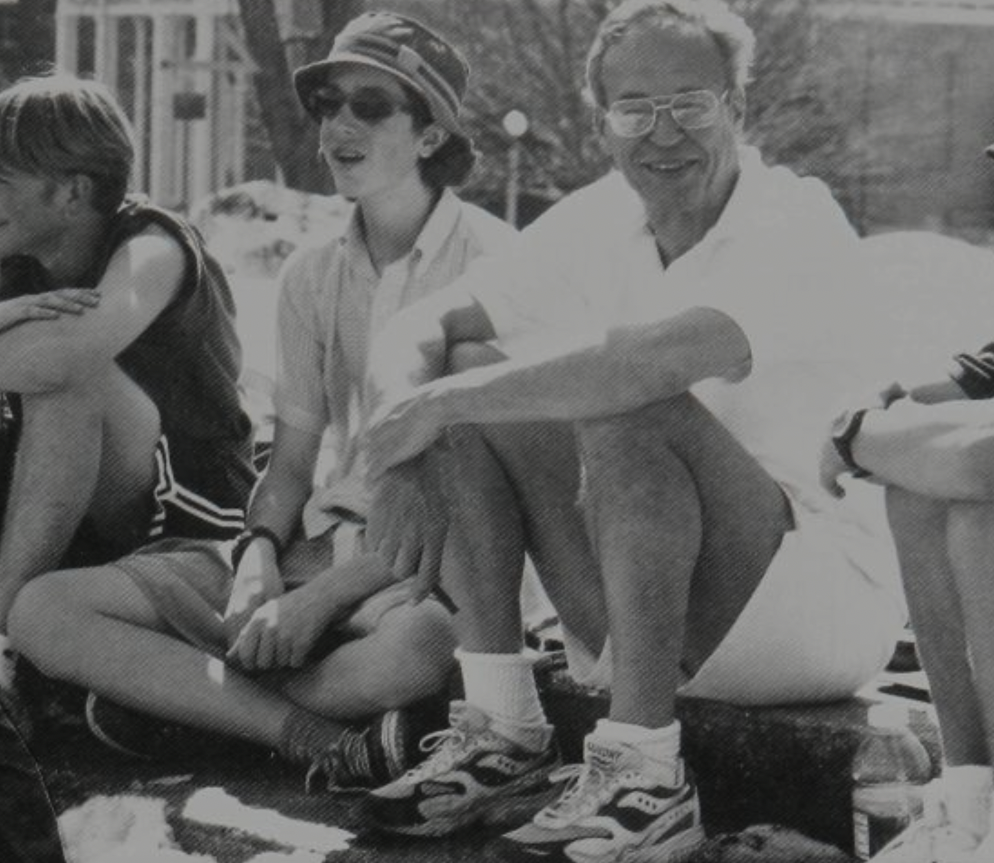 A career lawyer and former President of the New Hampshire Bar Association, John served as Proctor’s Chair of the Board of Trustees from 1989-1996. In the summer of 1997, John was hired by English Department Chair Sarah Will at the young age of 62 to teach English, coach 3rds soccer, and run Ives House. John and his wife, Betsy Carruthers, jumped with two feet into the lives of Proctor students when most individuals jump with the same enthusiasm into retirement. John’s impact during his time as an educator at Proctor (1997-2006), mirrored that he had on others throughout his life.

John’s first exposure to Proctor came through his two sons attending, John ‘85 and Brigham ‘88. In 1989, he joined Proctor’s Board of Trustees, serving tirelessly throughout his terms and eventually stepping into the role of Chair of the Board of Trustees from 1991-1996. Under his leadership in the fall of 1992, Proctor launched the major $7,000,000 Learning Center Campaign. The Board of Trustees voted unanimously to name the new building in honor of David and Alice Fowler. Dedicated in June 1994, the Fowler Learning Center not only housed the expanded Lovejoy Library, the Learning Skills Department but also the "new" computer center as well as a multipurpose room and became the new focal point of the campus. 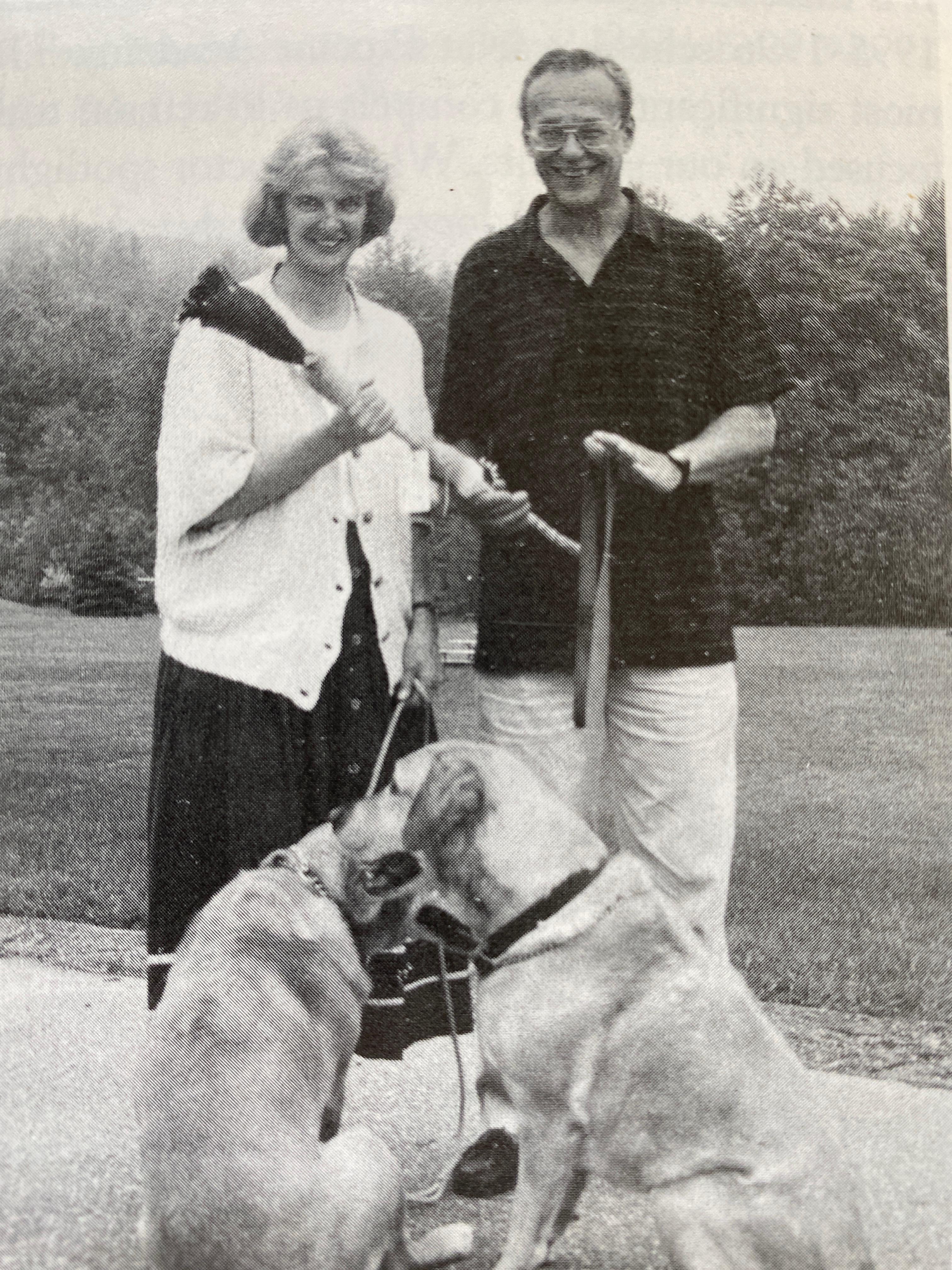 John Pendleton with his successor as Board Chair, Louise "Weezie" Johnson, P'95, in 1996.

The campaign also included funding to endow the program and create the Alice Stebbins Fowler Chair and scholarship, funded the renovation of Shirley Hall, and created an endowment to maintain the new facilities. John oversaw the school’s development of a long range plan and accepted the resignation of David Fowler, the school's 36th Head, after 23 years of leadership. As John noted in his 1994 report, "One does not replace a David Fowler - one merely attempts to find a worthy successor." John oversaw the hiring and successful transition to the leadership of Steve Wilkins as Head of School (1995-2005), while also leading the school to develop a Strategic Financial Plan, growing from 299 to 319 students. In 1996 John became an Honorary Trustee after passing the "talking stick" to his successor Louise "Weezie" Johnson, P'95, Proctor’s only female Chair of the Board. In his report to the Board in 1996, John wrote, “This is my fifth and final report as a President of the Board of Trustees. I am delighted to tell you my successor is Louise Johnson….In the meantime, I have assured my continued participation on the Board by amending the Bylaws to accord former Presidents lifetime Board membership. I have no intention of leaving the school which I love more than any other.” 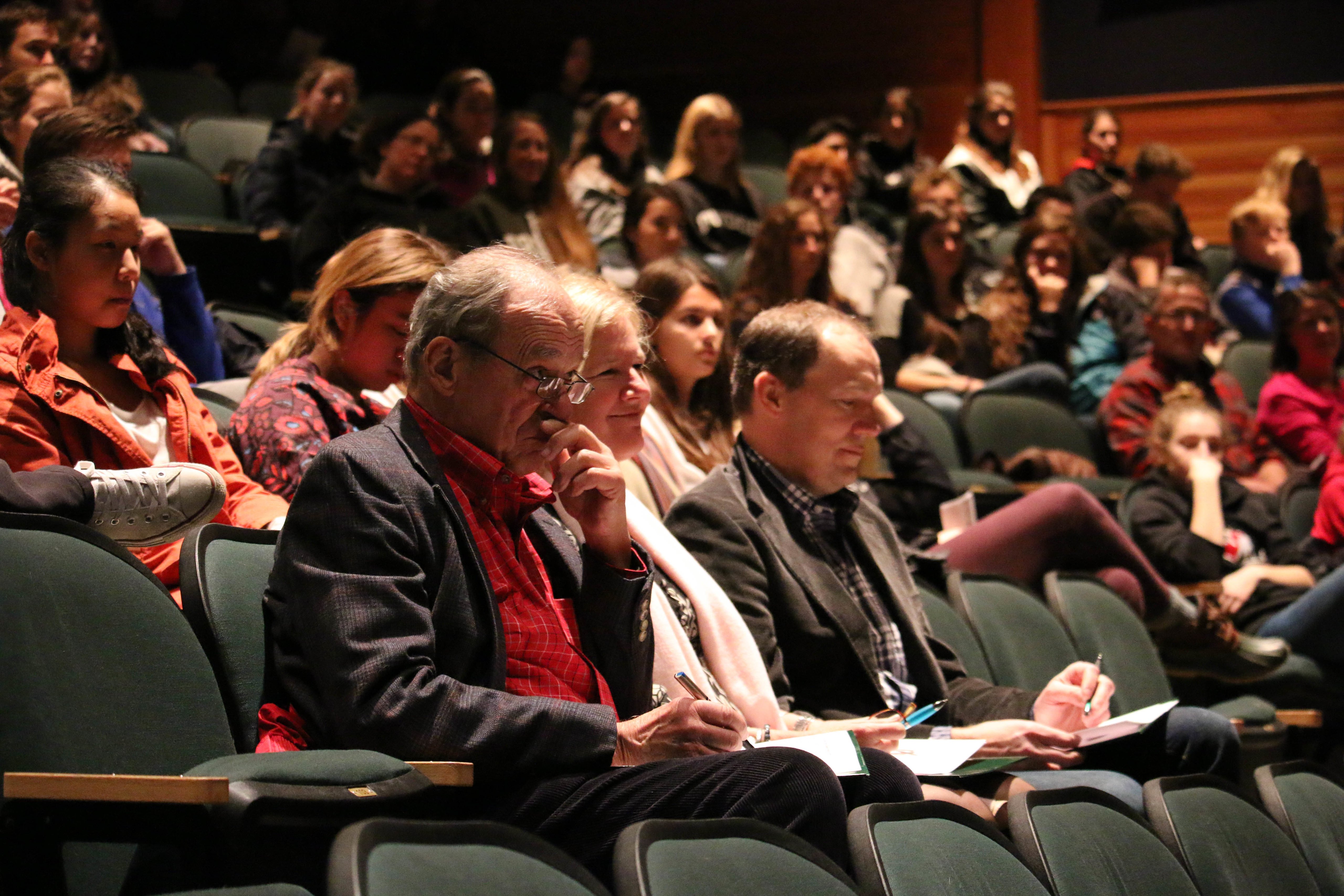 John, alongside former Vice Chair of the Board of Trustees, Liz Blodgett Smith '81, P'13 (center) judging the 2019 Hays Speaking Contest.

After stepping down from the Board, John expressed an interest in joining Proctor’s teaching faculty, following thorough on his above promise to never leave the school he loved more than any other. Instead of following conventions (most schools would not be too excited to hire a 62 year old attorney and former Board Chair to teach English, run a dorm, and coach), Proctor’s leadership, led by English Department Chair Sarah Will, embraced the opportunity. Sarah reflects on John’s impact, “John coached, ran a dorm, led an Orientation group well into his 60s, and was a champion of women. He really saw you. He looked and listened and got to know you as an individual - both his colleagues and his students. He helped define our harassment sensibilities as a school, taught Brit Lit, and started the Hays Speaking Prize in honor of former Trustee Bill Hays. His impact at Proctor extends to all areas of the school and his legacy is seen in the Proctor of today.”

Longtime colleague in the English Department, Peter Southworth, adds, "John's optimism and belief in people never wavered, and he wanted to know your story. For years while teaching sophomores The Great Gatsby he dressed head to toe in a white linen suit, complete with silver and gold accessories, to bring Jay Gatsby into Maxwell Savage. These are the memories of John that make me smile."

Former Head of School Steve Wilkins shared similar thoughts on John’s impact at Proctor, “John was Chair of Proctor's Board and a highly respected, long-time lawyer in Concord when I was hired by Proctor in the late fall of 1994. Upon signing the contract, I was perplexed as John inquired if I knew what he hoped our future relationship would be. Beyond the obvious, I had no clue what he meant. John offered that his new career goal was to teach social studies at Proctor. I couldn't make that happen immediately, but John joined the Proctor faculty in 1997 as a full-time English teacher, advisor, coach, and dorm parent along with Betsy in Ives House. Some retirement job, eh? John was clear that he wanted no favors or concessions as he took on all the roles of a teacher at Proctor. He was going to do what Proctor expected of any faculty member. John put 100% effort into his new job-life, always with humor, sincere care for his students and Ives girls, and a keen intelligence distinguished by uncommon common sense. Upon arrival in his new job, perhaps, he was technically well above the age of the typical quadruple threat boarding school faculty member. Yet John's enthusiasm, energy, and commitment added purpose and passion to many, many Proctor Academy students. John even maintained the energy to play after-work tennis with his younger colleagues, where he earned the nickname Smasher for his superb skills on the court.” 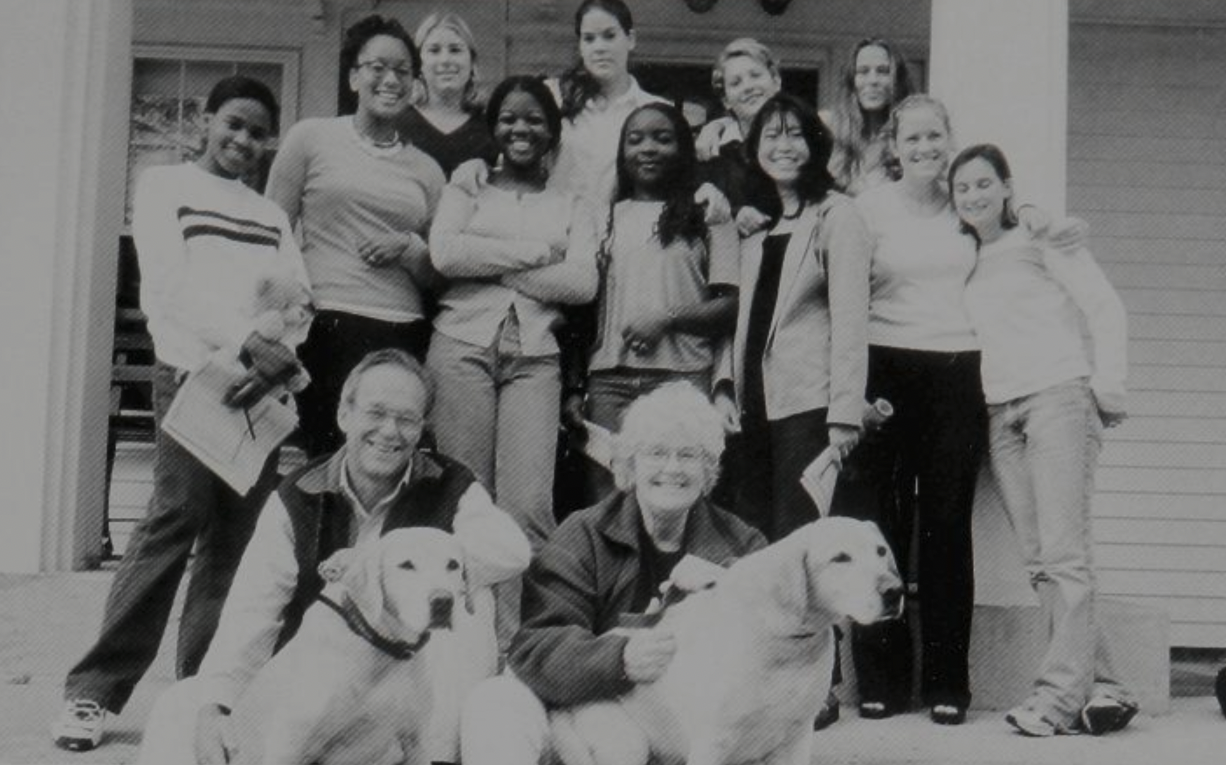 John and his wife, Betsy, alongside their Ives House dormitory.

Whether it was visiting his four grandchildren who attended Proctor between 2000 and 2020 or making an annual visit to watch and judge the Hays Speaking Prize each February, John’s presence on campus remained steady until this past year. He always greeted faculty, staff, and students with kind words, a firm handshake, and genuine care. John will be greatly missed and greatly remembered for his impact on Proctor over the past 35 years. A service will be Saturday the 8th of October at 1:00 PM at First Parish Church in York, Maine