Student Voices: Behind the Paint

Avery Montgomery '17 wrote the following piece for Proctor's student newspaper, The Hornet's Nest. You can check out the most recent edition of the Hornet's Nest, as well as archived editions and more student work from Journalism classes HERE!

When I give tours through Slocumb Hall, I tell them to look at the floors. You see, the floors of Slocumb Hall are the telltale sign that this building was once used as the school’s basketball court. The long, lacquered boards prove that once, a long time ago, these floors were subjected to drills, many games, the sharp blow of a brass whistle, and cheering fans.

Today, I walk in, open the large door, throw on an old denim apron and start mixing paint. The building has completely transformed its meaning, but signs of its past still linger. With old buildings such as this one, it has changed and grown, the paint on the walls sliding on, layer over layer, as many stories have unfolded. I want to share a few of them.

I had heard many rumors about Slocumb Hall’s past lives, but I needed some sort of timeline.  Initially, I went to the development office and inquired there. Eventually, Lynn George of the Maintenance Department was kind enough to go through her records, but there was only a vague estimate on how old the building was. In the column under Slocumb Hall, all that was written was “around 1900.” I needed a new lead. So, I started googling.

By reading through old newspapers and historical texts, I was able to get a clearer outline on the history of Slocumb Hall. What I found was that Slocumb Hall we know today was designed by a man named Herbert Langford Warren. Warren was born in 1857 in Manchester England and then moved to the United States to attend MIT. Afterward, he found himself working as an architect and the project to transform a livery stable (ancient Slocumb Hall) into a school building came to him.  He created the classic giant windows and high-arched ceiling that we cherish in about 1888. The building was then used as a mailing room, and then a gymnasium with shower rooms on the north side. 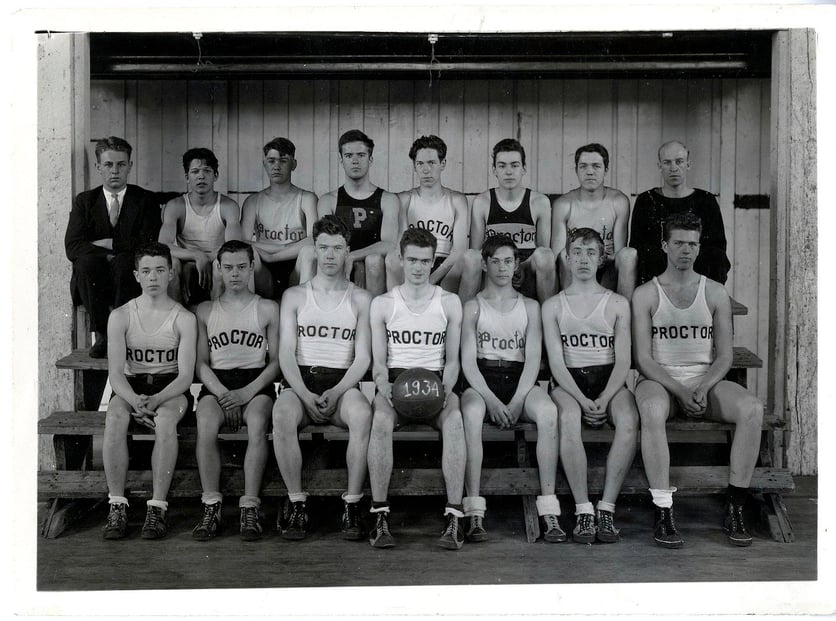 Slocumb Hall has been home to many things: horses, mail packages, basketballs, boys, a metal forge, miles of canvas and layers of paint. A spiral staircase once wound its way along the west wall, leading to a balcony. Students would stand there during basketball games, calling down to the court. In the 1960s and 70’s the building was used as a combination dormitory and art studio. The building was also used as a free daycare for the children of faculty.  In 2010, the west side of the building was remodeled, adding the photo studio and a small classroom. 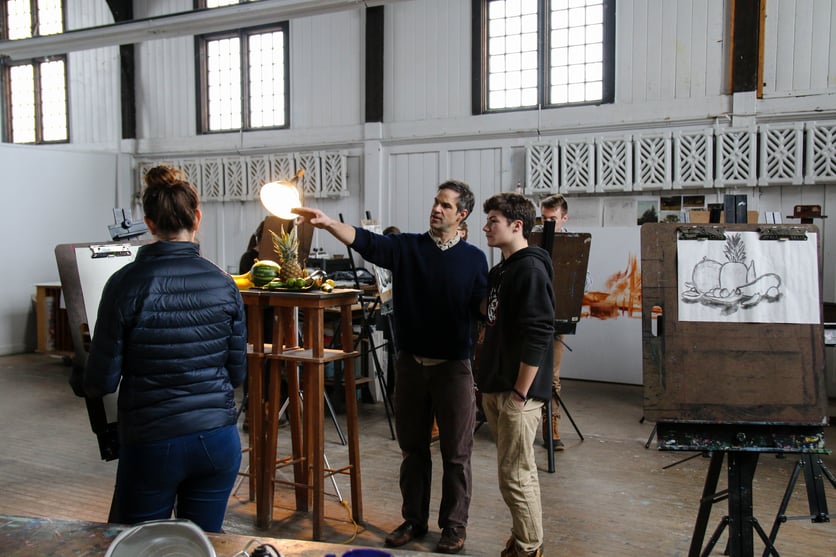 When I interviewed Corby Leith '92, a current art faculty member and artist, he told me about his time at Proctor and the ways that Slocumb has evolved but in many ways stayed the same. “The clay on the ceiling was there when I went here, it was probably there long before that. It’s a Proctor tradition.” The clay, thrown up onto the ceiling by impetuous ceramics students will probably stay there long after I graduate. The ceilings are exceedingly high, and although a little unsightly, there is a bit of charm to the clay-speckled ceiling.

Corby shared his big plans for Slocumb Hall. In “the dream” he wants to create painting files in the wall where the balcony used to stand using a library ladder to access the archives of art. Next up is to install new state of the art lights for even better ambiance on those cloudy, stormy days.  Finally: a sliding door under the south window that leads to a covered terrace for plein aire painting.  When I asked Corby whether he liked the building, he exclaimed, “I think we’re blessed, I think we have the best room on campus. I love the light.”

I love Slocumb as well. I love it because to me, it’s more than just a building. It is the perfect place to create, to dream, to talk, laugh, and be merry. On Saturday nights, I’ll walk in and find students sitting and drawing and joking, listening to music and producing beauty. This project has only made my experience when I enter Slocumb richer. I now have a glimpse of just how many people have stepped over the threshold, how many innovative, bright minds have tried something new in Slocumb Hall. Underneath the white paint on the walls are murals, installations, and slyly signed signatures in the corners.  Many alumni have begun their careers as artists in Slocumb Hall, standing in front of a blank canvas, searching for inspiration.

Here’s to many more year of sunlight shining through the picture windows of Slocumb Hall!