Each summer, Proctor's faculty shifts gears and spends time enriching their Proctor experience. For most, the summer is spent enjoy the outdoors, hiking, cycling, and spending time with family. This downtime also affords a tremendous opportunity to pursue an avocation alongside their vocation as educators. Here's a quick window into a few summer projects by Proctor's faculty!

This summer, Fiona Mills of Proctor’s Social Science Department has worked to complete an edited collection of scholarly essays on Kathryn Stockett's 2009 novel The Help that is under contract with Cambridge Scholars Press. Fiona notes, “I have been fortunate enough to secure several high profile academics to contribute to the collection including Trudier Harris, J. Carlyle Sitterson Distinguished Professor Emerita at the University of North Carolina and one of the foremost scholars of African-American Literature, who has agreed to write the 'Preface'."

Kathryn Stockett’s 2009 best-selling novel The Help, and its subsequent 2011 film, centers on the experiences of African-American domestic workers living in Jackson, Mississippi. The issue of visibility/invisibility is central in this text. At its most basic level, the text itself has lacked traditional critical visibility as, currently, there has been a dearth of academic books that focus on this specific novel, although the novel and subsequent film received much attention in national newspapers and magazines as well as significant critical debate in a wide variety of online venues. This collection considers why such sterilized versions of America’s complex racial history resonate so deeply in our contemporary time frame. Essay topics range from examinations of the laboring black female body to the impact of domestic work on families, both black and white, to explorations of the connections between rhetoric, writing and race.

In addition to working on this collection, Fiona has spent the summer volunteering as an official Fellow in Hillary Clinton's campaign and was invited to teach a week-long summer course entitled "Our Bodies, Ourselves: Reproductive Rights on Film" at the President's College at the University of Hartford in June.

Dave writes of his work this summer: "Along with other painters from various backgrounds from Texas, California to Hawaii, and their many life stories, I realized that my Proctor story is almost like a fairytale.  First of all, in our introductions, it became very clear that I was in the minority for actually loving my profession.  I was in the mix of people who all loved painting, but had to put it on hold at various stages for the thing called life.  For many, devoting a life to painting was only a distant dream, a latent discovery or an economically unwise career choice back in their 20's. I've never not painted and was fortunate to have parents who knew that the pathway to a rich life was to do what one loves to do." 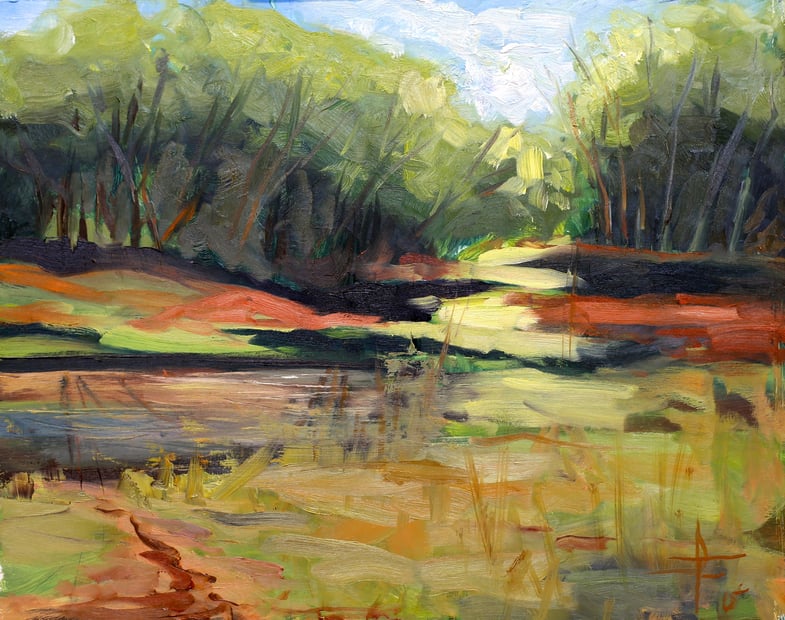 He adds, "With that said, to claim teaching fine art for 22 years in a circle that included arguably one of the most collected and talented American Realist painters in the 21st century was…entertaining.  Kevin Macpherson quickly found my weaknesses and pushed me to get better.  I struggled in finding the subtle New Mexican value shifts in color.  There is studio painting and then there is painting outdoors or “en plein air”.  Teaching Proctor students this challenging method on European Art Classroom is a cornerstone to our curriculum and assuming that I know enough is the easy thing to do.  I got better over the week, due to hard work, painting from 9-6 everyday. Just like my family, thank you Proctor for never closing doors to my professional growth and to what I love, which inherently translates to hungry students.  We are fortunate to live and work at Proctor, a school that embraces the arts and we only need to step into other peoples’ lives for a week to realise how lucky we are."

Not all summer work needs to be academic in nature, much of the value comes from personal exploration and goal setting. On Sunday, June 14th, in Kennebunk, ME, Suzanne Rasweiler, better known by her Proctor family as 'Raz' set out on a 100k Tour de Cure bike ride for diabetes. Raz's decision to participate on the ride was to honor her nephew, Drew, who was diagnosed in the spring of 2015 with Type 1 diabetes. Throughout the spring term, Raz took to her bike when she was not teaching in Learning Skills, co-coaching the Proctor girls softball team. Raz was determined to ride to honor her nephew, Drew and his family, and along the way raised over $5000 towards the funding of diabetes research. Raz's commitment, dedication and sense of fun that accompanied the ride spoke volumes to the fabric of this Proctor educator and what we hope will be her long-term impact on many students yet to come. 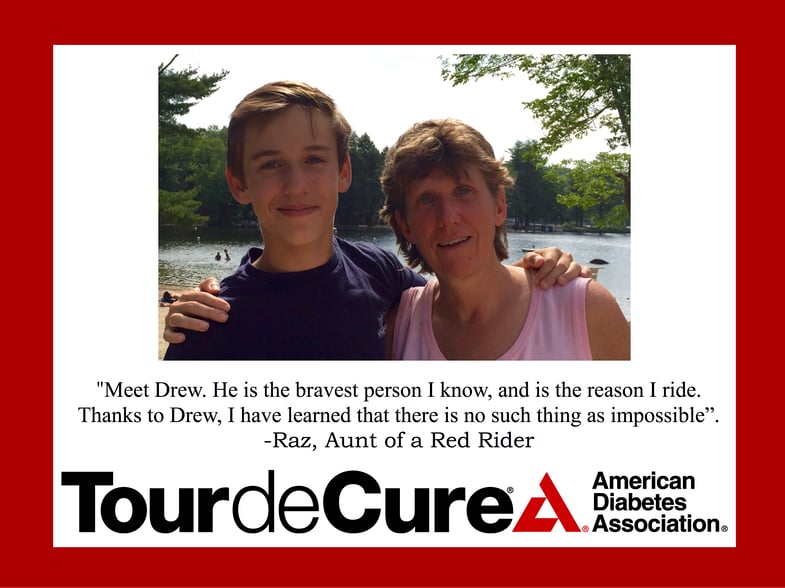 One of the benefits of being a teacher is that most of June, July and August allow time to pursue a passion…an avocation. I enjoy playing music and working outside, but without a great deal of luck, talent, money and perseverance (1 out of 4 ain’t bad) it is difficult to pay the rent or put food on the table as a farmer or a musician. In 1985, I chose teaching as my career, but I never lost the dream of being a farming musician or a musical farmer.

In late 2003 I was invited to join some friends who had started a band to entertain Proctor faculty and staff at the upcoming holiday party. Having played guitar for 25 years and sung my whole life, I jumped at the chance.  Since then, our chemistry as musicians has allowed us to become a sought after dance band throughout Northern New England. My summer weekends are spent with my best friends (Dave Pilla, Scott King, Keith Barrett, Chuck Will, Eric Viandier, and Nick Eaton) playing music at bars, private parties and weddings from Cape Cod to Vermont’s Northeast Kingdom. For me, there is nothing quite like making music along side your best friends to liven up a group of party-goers.

What about farming, you ask?  Lawre (my wife) and I spend our summers on a farm in Rhode Island alongside her older sister, Helen, and younger sister, Josie, and husband, Tom. About 15 years ago Josie and Tom started a grass-fed cattle farm to care for the land without using lots of fossil fuels and fertilizer. The Devon bulls and Angus cows (plus some Herefords mixed in) produce cattle that grow well on only grass and are marketable to area restaurants because the meat is local and lean. Their herd grew from a few cows to almost 100 head by 2013. They graze on about 80+ acres while the other 40 acres are hayed once per season. Since those 40 acres do not provide enough hay to feed the cattle during the winter months (they consume 3 round bales each day), we hay several other properties around town for the landowners. This is where I come in. On weekdays I mow, shake, rake and and bale hay for the cattle winter feed.

Haying provides a great vantage point to the natural world. In the course of one haying cycle white-tailed deer, red-tailed hawks, peregrine falcons, osprey, wild turkeys, glossy ibis, egrets, and great blue herons are seen from my tractor seat. Herring and black-backed gulls hover, dive and devour Eastern Cottontail baby bunnies or field mice that have been exposed by the haying. Barn swallows swoop around my tractor as the implements kick up a smorgasbord of insects for the taking. Coyotes boldly peruse the mowed fields for the same bounty while their pups bounce around the windrows. 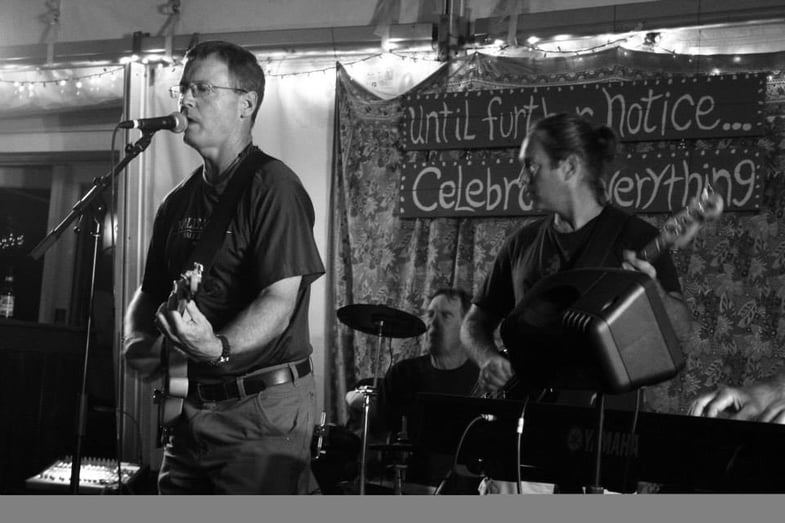 The "life balance" that the arts and farming provide allow me to pursue my teaching each September with a renewed sense of purpose. My summer "work" also creates a broader context that inevitably improves my teaching in and out of the classroom.

This is just a small sampling of the work faculty have done over the summer to learn, grow, and recharge for the upcoming year. How did you work to revitalize yourself this summer?