During the aftermath of the fire, Proctor repurposed the south end of the Farrell Field House to serve as a ‘temporary’ dining space, servery, and kitchen. Thirty-eight years later, with a student population that has grown by nearly one hundred students, that temporary solution continues to serve more than 1200 meals a day. Next September, however, that will no longer be the case.

Through the incredibly generous support of donors, the new Proctor Dining Commons will be a reality, and those 1200 meals a day will be served in a whole new way. The 16,000 square foot facility will be the ‘greenest’ Proctor has ever built and will transform the residential life experience of the entire community.

On Saturday morning, members of the Board of Trustees, the Corporation, faculty, staff, students, and supporters of Proctor joined together for a groundbreaking ceremony in front of the Cannon Dining Hall. Head of School Mike Henriques opened the event by noting, "Moments like this do not happen without faith, with belief in the mission of the school, and deep support of that mission and that dream through their gifts, passions, and support of the school."

Mike then highlighted Edna Peters and her persistence in asking when he would build her a new dining hall. “Edna, I am making good on an eleven year old promise I’ve had to you. You are going to get your new dining hall!”

As with any significant building project, it is only through the support of Proctor’s incredibly committed donors that this dream is realized. For decades, our talented dining services team has magically used subpar facilities to prepare delicious meal after delicious meal. Their excitement for the new Dining Commons is palpable. Longtime dining services director, Art Makechnie noted, “I have never been to a school’s dining facility that is as welcoming and full of warmth as Proctor’s. People want to be here, they want to spend time together here, and we have worked very hard to create this type of atmosphere.” 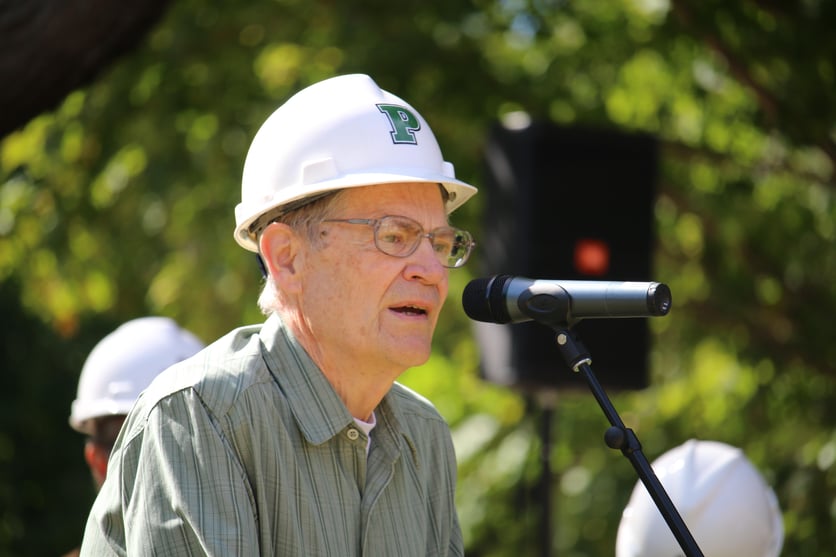 He went on to add, “The architects for the Dining Commons have spent much time with us as a staff to hear what is important in this new facility, and I have confidence it will be just as filled with warmth and a welcoming atmosphere as the Cannon Dining Hall was for the last thirty-eight years.”

Trustee and past parent, Tim Miner P’10, added incredibly insightful comments during the celebration as well. Tim has chaired Proctor’s buildings and grounds committee throughout the planning process for this new facility and noted it has been ‘messy’. While many might say this as a negative, Tim noted, “Proctor mirrors the real world in so many ways. Not only through the experiential approach to learning we deliver to students, but in the messyness that is real life. This project has been messy, as everything is. We do not need to pretend life isn't messy, because that's where the beauty of life lies.Things rarely go perfectly as planned, but through the hard work and determination of everyone at Proctor, the architects, and builders, we are going to have the greenest building Proctor has ever built."

The groundbreaking for the Proctor Dining Commons signifies a tremendous step forward for the school. It is the first project in the Campaign for Proctor, a $30 million capital campaign that will transform Proctor’s physical plant and invest heavily in the programs and people that make Proctor special. It is also a project built around enhancing relationships between students, faculty, and staff. This is core to who we are, and we are excited to see this remain central to the Proctor experience for generations of students to come.

Thank you to those who have made the dream of the Proctor Dining Commons a reality!