The team’s first two home games last weekend saw the Hornets come from behind to earn victories over Tilton School and Brewster Academy. While the team played well in all three games, it fell short to a talented Kimball Union squad on Wednesday. The team fed off the crowd’s energy in all three games, and are continuing to learn how to buy into the team’s system of play. Tri-captain Matt Slick ‘17 noted, “In order for our team to continue to find success, we need everyone buying into our way of playing. We need to do all the little things right, such as blocking shots and finishing hits. If we do enough of the little things right, than I think we will be putting ourselves in a great position to win games.”. 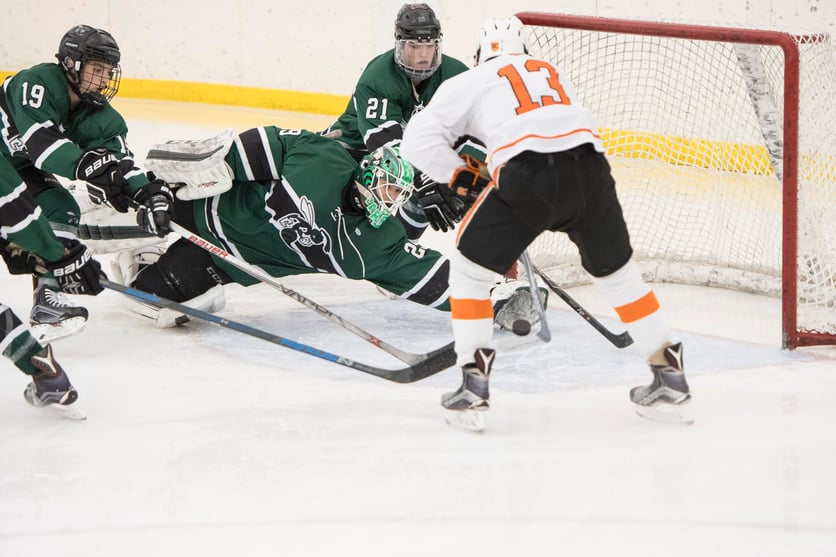 Part of the learning process for this young team includes welcoming a new era of younger players to the program. The team graduated five key players from the 2015-2016 season (check out for more information on the college athletes here), leaving a gap for chemistry to be built between returning and new players. Slick notes, “It goes without saying we lost some important pieces to our offense this year. However, I think the new kids we have are adding to our depth. We reiterate the fact that we need everyone this year to contribute if we want to find success. I think an important piece is that everyone stays positive, there's no finger pointing. When someone makes a mistake, there are always two guys there picking him up.”

The mixture of new and returning players creates a significant diversity in the style and age of the players on the varsity team. Slick notes, “Our biggest strength is our depth. We have an even spread of lines that can all play. We need to stay out of the box so we can use our depth to our advantage. I also think we have a really good worth ethic in the locker room this year. Everyone shows up to practice with a really good effort that makes the team better. If we keep improving every time we touch the ice, I think we will find a lot of success.” With a positive outlook on the team’s effort and training, the Hornets hockey team looks to have a successful season.

With upcoming games, the team looks to capitalize on its chemistry, crowd energy, and recent success. This Saturday (December 10) the Hornets host Thayer Academy at 1:30 PM, followed by a home game on Monday (12/12/16) versus Vermont Academy at 5:00 PM. Be sure to get out and support the Hornets!