In the midst of celebrating the end of the school year, student accomplishments, the performance of the spring musical, art show, and saying goodbye to retiring faculty and staff, we pause to honor the life's work of former faculty member and legendary coach, Spencer "Spence" Wright P'72, '75 who died at the age of 94 on May 14, 2019. 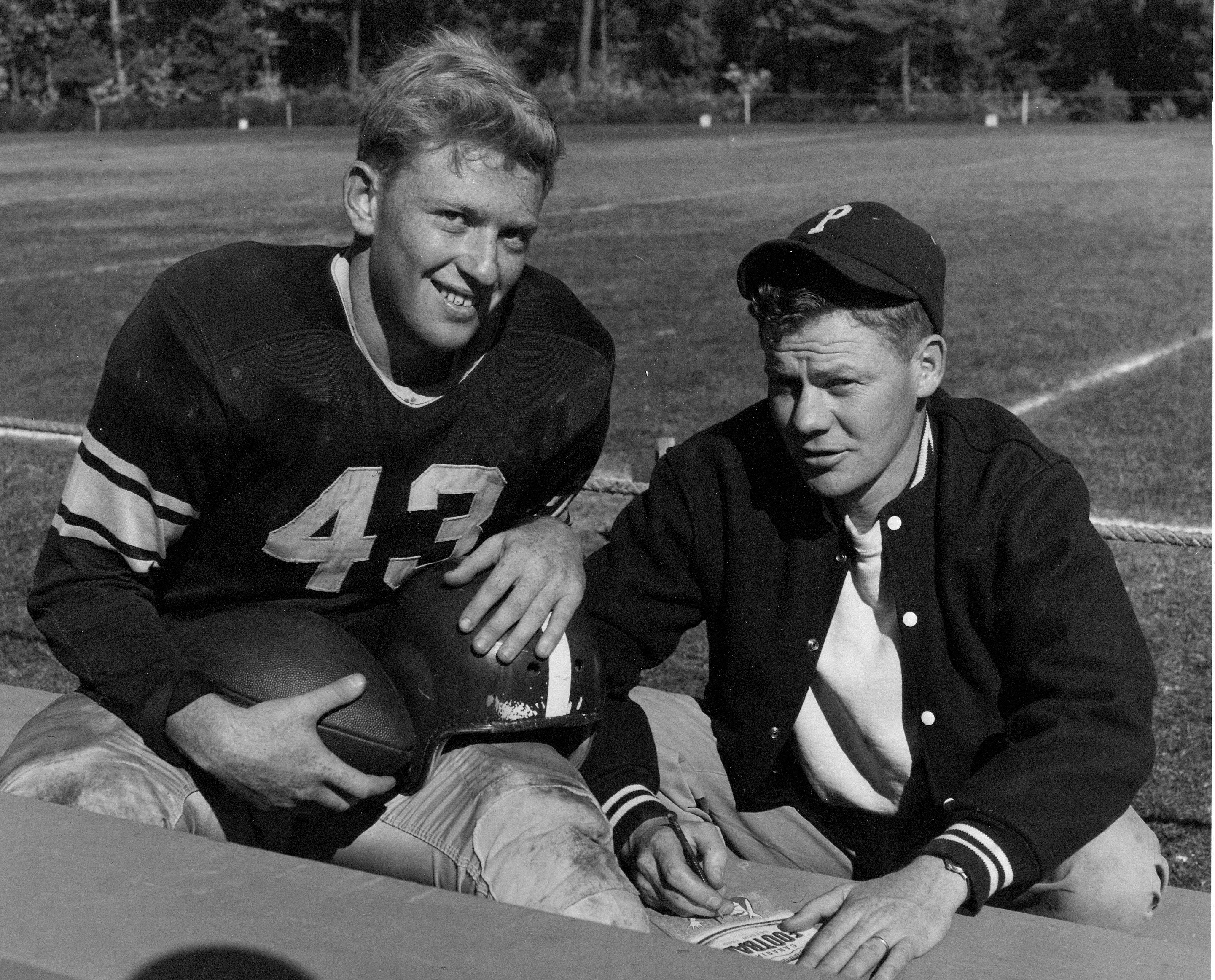 Proctor Academy’s athletic program was forever changed the day Spence Wright arrived on campus in the fall of 1951. As a history, math, and economics teacher, Spence applied a no-nonsense, disciplined approach in order to get the most out of his students. His coaching style varied little from his approach to teaching as his football, hockey, and baseball teams received clear instruction in pursuit of a shared goal, and equally clear punishments when they fell short of the effort and focus Spence desired. After reintroducing a varsity hockey team at Proctor in 1955, Spence went on to lead the team to a league championship just three years later. Commanding the sidelines of Leonard Field, the Proctor Pond hockey rink, and Farrell Field’s baseball diamond with equally impressive understanding of both sport specific tactics and adolescent psychology, Spence left an indelible mark on Proctor’s athletic program during his twenty-one years at the helm. As Proctor’s first athletic director, Spence utilized his unique combination of irrepressible optimism, high expectations, and loving humor, to form, and sustain relationships with his students and players that lasted for decades following their graduation. His commitment to Proctor's athletic program, but more importantly to the boys on his teams, defined a generation of Proctor students who to this day cherish their relationship with their coach and their teammates. 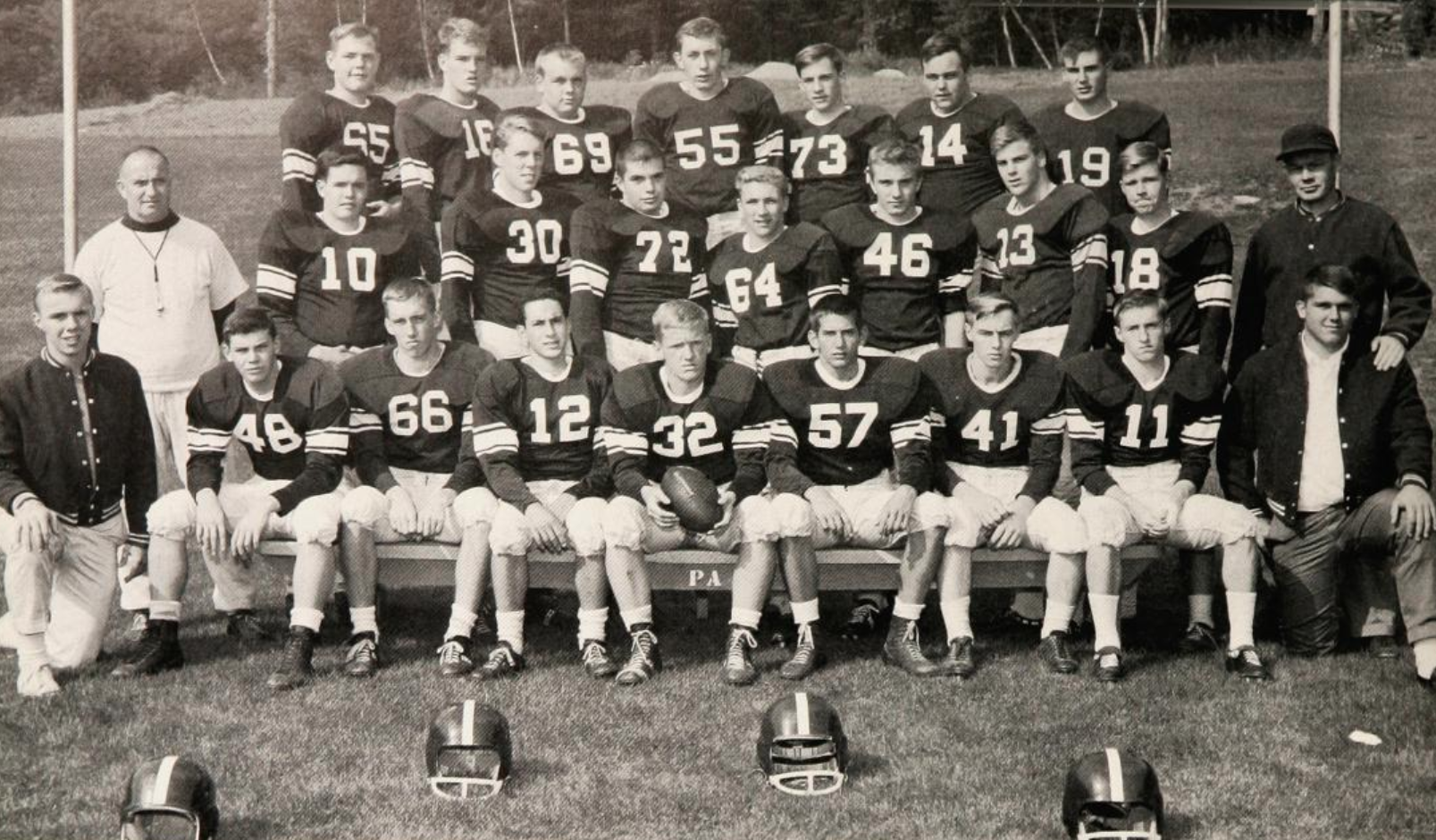 Curt Peterson '62 received the following note from Nancy Wright, "Curt, your old teacher Spence Wright died yesterday, so you are released from having to hand in tomorrow's homework. He was found with a piece of crumbled chalk in his hand." Curt commented he was probably getting ready to throw that chalk at someone. In a heartfelt "eulogy" to his classmates and friends of Proctor, Curt shared the following:


Given the times and the character of the students at what was known then as "The School of Last Resorts", Spence Wright was one of the best teachers from whom I ever had the honor of learning life lessons. At age fifteen or sixteen, Spence seemed my nemesis - endless tests and quizzes that he claimed we "wrote ourselves", unreasonable loads of homework, including the Wall Street Journal cover-to-cover (quiz), U. S. News and World Report cover-to-cover (quiz), criminal retribution translated into hours of back-breaking labor on various athletic fields and hills, agonizing coin-flips for grades ("You make a very good point, but I just can't buy it. I'll tell you what - we'll flip a coin. You call it. If you win, I'll give you the half point that will make your D+ a C-. But, to be fair, if you lose, I'll have to take a half point away, making your D+ a solid D."), and the inevitable "deal" ("Yes, I see you need new tires on the fire truck. I think I can persuade Dr. Farrell to purchase them, but do you think the fire department can come up with a dozen boys to help clear the brush from the ski slope? I'll think about the tires until that's done.") 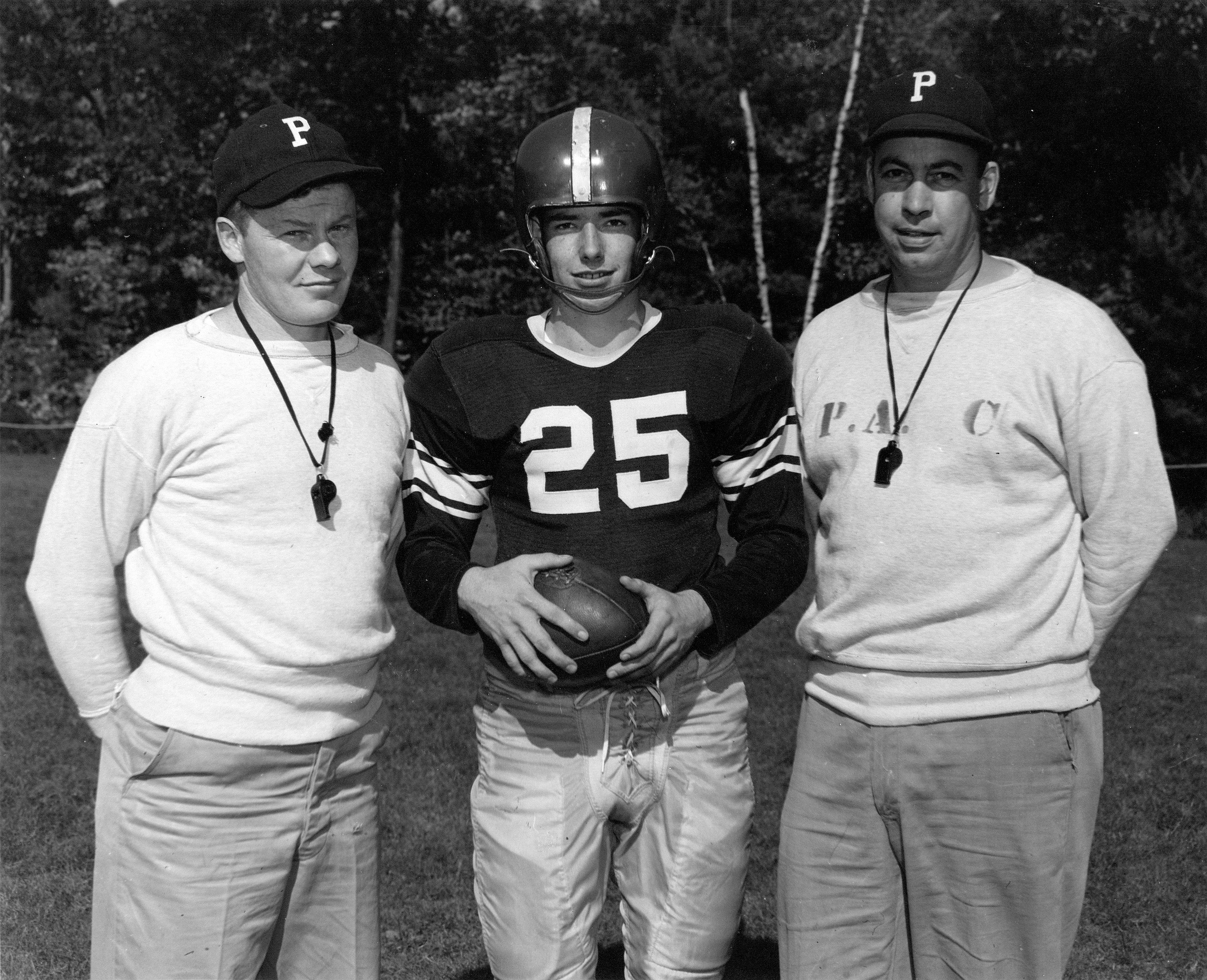 He let me drive his beloved dashboard-dagger '55 Dodge to Franklin to take my driver's license test, with three other students in the back seat - if only their parents knew! In the seventies I came back to visit Proctor on the day of the Varsity v Alumni Hockey Game, which Spence was reffing. It was then that, watching him glide across the ice blowing his whistle and barking reffing noises, I realized he was one of the heroes in my tawdry life. I said to myself, "I wonder if he will remember me if I say 'hello'." Our eyes met. He blew his whistle and yelled, "Hold on a minute, boys, there's someone I have to say hello to!" He skated over to the fence and stuck his finger through the mesh. "Peterson - I want to see you later." Big Spence grin, twisted freckles on is face, twinkle in his eye. At least from my point of view it was a lifetime highlight, and the beginning of a decades-long enjoyment of rapport, banter, memories and bonding.
One of the things I regret most from my seventy-six year adventure is that I put off seeing Spence more often than I have. And there's no taking that mistake back now. Good-bye Spence. Enjoy the deep and dreamless, and painless, sleep you've very well earned.

Spence impacted hundreds of young men in the same way he changed Curt's life. He held them accountable, and in the process helped them realize who they could become. While no one at Proctor today had the privilege of working with or being taught be Spence, many of us have seen a glimpse into his deep impact on this school during his visits back to campus, most recently for Alumni Reunion in 2017. The stories he and his former students shared are from a by-gone era at Proctor, but the example he set as an educator lives on. Few photos better capture the impact we can have as educators than the one below of Spence walking across the field hand in hand with Artie Pratt '56 in the fall of 2012. May we each be so dedicated to our students that the young people we are teaching today are willing to hold our hands into old age and carry our legacy onward for the next generation of our Proctor family. 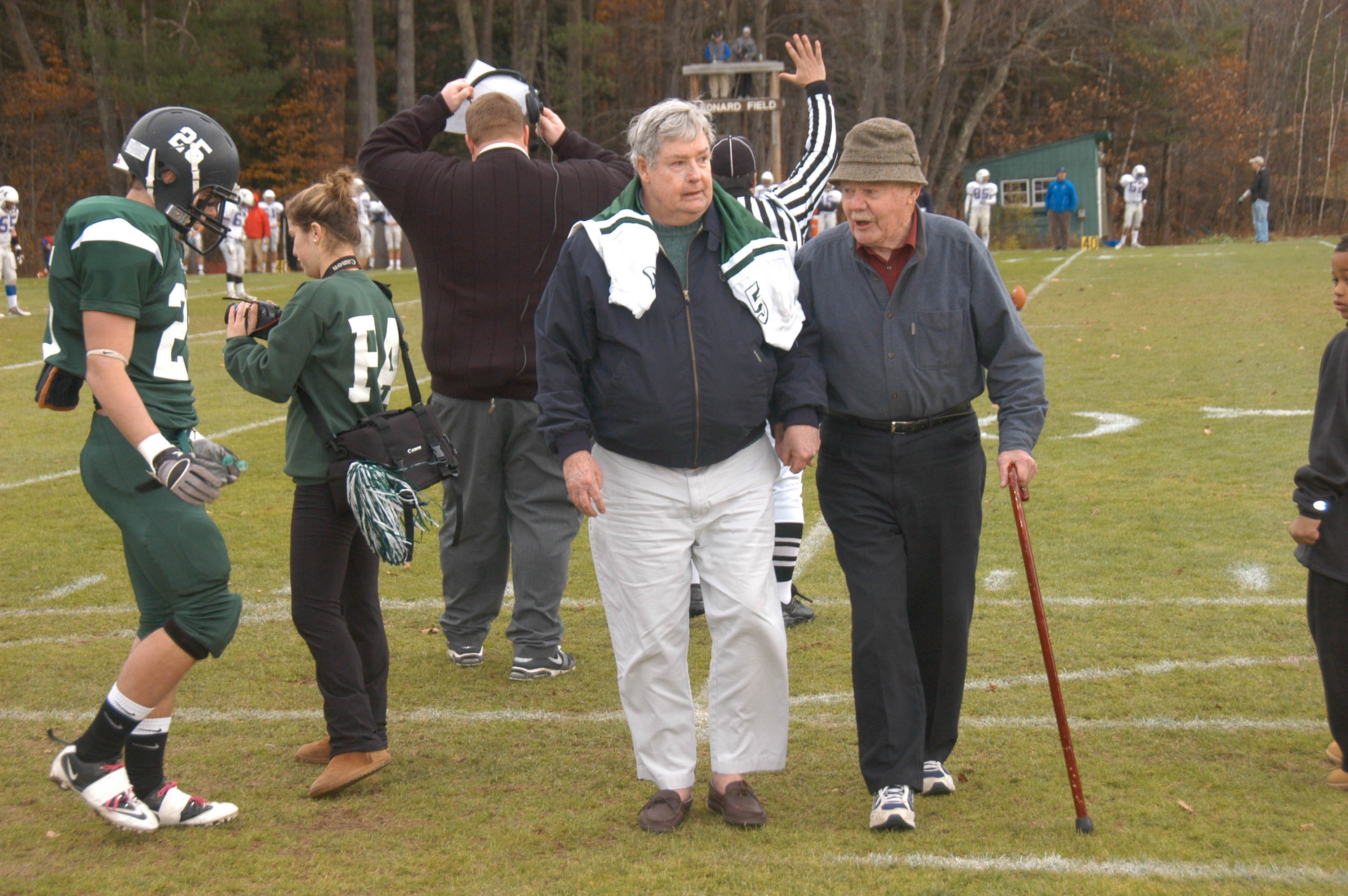 A service will be held on Wednesday, August 14 at 2:00 PM at the Wright Family camp on Lake Dunmore, Vermont. The camp is located on Leisure Lane and there will be signs directing people to the site. If you have questions about attending, please reach out to Gary Wright at garywright2121@gmail.com.