Our lives are filled with borders, but we should not view borders as synonymous with barriers. As Mountain Classroom students will learn over the course of the next ten weeks, borders often tell us more how we are similar than how we are different; they expose commonalities that underlay outward differences. The process of identifying where borders exist, and understanding how those borders impact our lives is powerful. This weeks' journey to visit Proctor alum, Jordan Thompson '01 on the Akwesasne Reservation provided the group's first physical encounter with cultural and international borders. 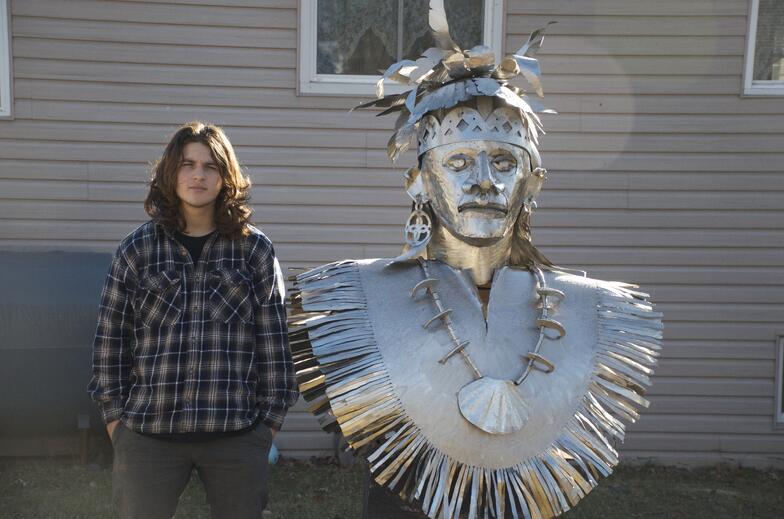 David Windsor and Luc Parmentier share a brief student reflection on the trip below:

Our challenge made a stop in Hogansburg, New York where we met up with Peter’s old friend and Proctor alum, Jordan Thompson ’01. We made our way through the Canadian border and began our experience of the Akwesasne Reservation. Jordan gave us an amazing tour of the reservation's museum and showed us his painting of his very own interpretation of The Creation story. The crew also made a stop at a small little crafts fair where everyone was able to peruse pictures, scarfs, necklaces, and hats. Our group tries to focus on is how we interact with strangers we have never met; as we seek to be kind to all those we meet. We were treated to an outstanding meal made to us by the whole Thompson family, met Jordan’s family and we were taught about their culture. These polite strangers took part of their day to teach us strangers their culture and open up about their own personal stories. Overall it was an amazing visit and if we could we would definitely go back to learn more. Big shout out to Jordan and his family for making an amazing day for us and a huge shout out to Pat (Jordan’s Cousin) for allowing us to have an awesome house to stay at. We will continue to Mont Orford, Quebec, tomorrow and camp out in a cabin.

Just as Mountain Classroom will continue to explore borders through their curriculum, we encourage every student to evaluate the borders they have set up in their own life. Deciding to take part in one of Proctor's five term-long off-campus programs takes courage. It takes a willingness to cross a border into the unknown, where students leave behind the comfort of a physical classroom and immerse themselves in a cultural classroom in Spain, France, Costa Rica, aboard the Schooner Roseway, or Mountain Classroom.

Today, applications for Proctor's 2015-2016 off-campus programs are due. More than 100 of Proctor's 360 students will submit essays and other application materials to have the opportunity to study borders both in their own life and in the world around them. And that is what makes Proctor's educational model so exciting!